The bottom of our boat slaps against frothy waves as we head away from the calm waters of the Blue Lagoon Resort and out into the open ocean. I let my hair down out of its messy bun and scoot toward the back of the boat, my fins and mask in hand. Salty wind blurs my vision as we press on further and faster until finally, our guide Uli slows the boat down, points north, and bellows, “Tofua’a – Whale!” We’ll be swimming with humpback whales!

Uli shouts in Tongan to his deckhand Tao, who leaps from the boat and plunges into the Pacific. I watch him intently, eyes fixed on the tip of his snorkel. It’s the first morning of our expedition to the Kingdom of Tonga and we are in search of the main attraction. Suddenly, from about 150 feet away, Tao raises his right arm straight into the air. “Go now!” Uli yells. I shove my snorkel into my mouth and lower myself into the water.

Once beneath the surface, I gaze down into the blue abyss below me, no bottom in sight. I fight the waves and swim closer to Tao, feeling my excitement growing and my breath quickening as I search the deep shadows below me. Then, something massive looms up out of the blue — a humpback whale. 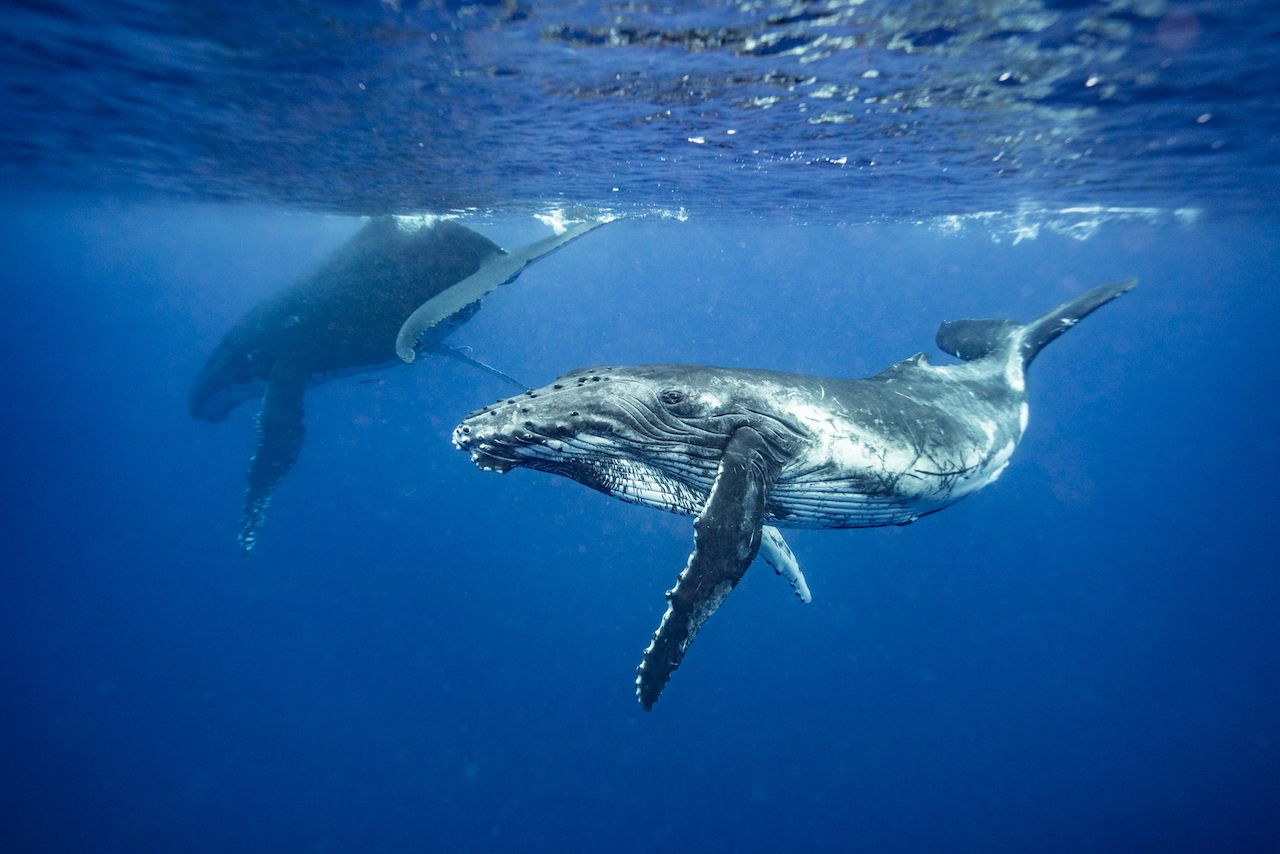 Over the next week, our team from the Blue Latitudes Foundation (BLF), as well as two members from the Matador Network crew, would have the opportunity of swimming with humpback whales. We swam with about 10 humpback whale individuals, males and females, young and old, and the butterflies never left my stomach. Each day, we learned a little more about them, their relationships with each other and their relationship with us. Most importantly, we learned about the unique connection between the local Tongan people and the whales, as the video at the end shows.

Tonga is a remote collection of over 170 small islands, located in the South Pacific between Fiji and New Zealand. Each year, beginning in June, humpback whales migrate over 3,500 miles to Tonga’s waters to breed and give birth. They spend several months in the protected lagoons and bays of the Tongan islands nursing their young, and this relative proximity to land draws in the attention of travelers from around the world hoping to catch a glimpse of these amazing creatures. Tonga is one of the only places in the world where you can get in the water with the whales, accompanied by a guide, as part of the regulated ecotourism industry.

But swimming with humpback whales was not always a standard industry in Tonga. In fact, Tonga’s humpback whales used to be hunted, as the whale meat, bones, and fat offered a significant source of income and food for the local communities. While hunting was small-scale and sustenance-based in Tonga, it was prominent internationally, so much so that the humpback populations fell to an all-time low of only 250 individuals and Tonga’s waters, which once vibrated with their seasonal songs, were nearly silenced. Recognizing this potential loss, in 1978, King Taufa’ahau Tupou IV declared a moratorium on all whaling within the kingdom’s waters. Since the ban on whaling, humpback whale populations in Tongan waters have slowly increased to over 1,500 individuals.

Today, Tonga’s waters are seasonally populated by the children and grandchildren of that original tribe of whales nearly hunted to extinction. And the Tongan people mirror this generational shift, with very few Tongans remaining who remember hunting the whales. It was this unique change in relationship that drew us to Tonga, to swim with the whales, learn from the new generation of Tongans about their attitudes toward the marine mammals, develop a better understanding of this generational shift toward ecotourism, and ask: Is it sustainable?

Is swimming with humpback whales sustainable in Tonga?

This relationship is nuanced. Tongans need the whales, but also understand that they do not own them and cannot rely on them. They respect them, but also have a history of hunting them for food. Over the course of this expedition, the BLF team sought to capture this complex relationship on film (see below), through social surveys and by collecting acoustic recordings, and examine how this relationship may be beneficial to the sustainability of Tonga’s environment, economy, and culture.

The BLF is a 501(c) nonprofit organization, exclusively for charitable, educational, and scientific purposes. We elevate the traditional concept of ocean stewardship by uniting government, industry, and the community to work together to conserve our oceans. In doing so, the foundation strives to explore innovative solutions to traditional marine conservation challenges.

And what we found is that it’s more complicated than we thought. Since 1993, when Tonga began to monetize swimming with whales through ecotourism, the number of whale swimming operations have increased with foreign operators moving in to take advantage of the three-to-four-month whale swimming season. In fact, of the 35-50 licensed whale-watching vessels in Tonga, only 20 percent are entirely Tongan owned.

As a result, more and more Tongans are being forced to leave the island to find work, especially given the limited opportunities to expand their income locally. And as ecotourism operations continue to increase, there’s a greater risk of impacting the sensitive whale habitat, which may lead them to not return to these waters.

However, the ecotourism industry in Tonga has had a relatively slow increase over the past decade, when compared to other nearby island nations and the ecosystems, including coral abundances and fish richness, are doing well. And, ecotourism has brought in income to the locals, while also helping to conserve the whales’ nursery grounds and protect their migratory waters.

So, with this understanding, we again asked: Is swimming with humpback whales sustainable? And the truth is we don’t have the answers now, but what we do know is that the Tongans have a unique core value at the center of their ecotourism growth that makes them stand apart from the other ecotourism practices: the idea of faka’apa’apa, the Tongan respect for the whales. It’s this respect that is keeping ecotourism growth and development sustainable. With this respect, the new generations of Tongans are striving for a balance, where they can use their ocean resources without using them up.

WildlifeWhere To Swim With the World’s Most Amazing Marine Wildlife
Tagged
Narrative News Tonga
What did you think of this story?
Meh
Good
Awesome

Volcanic Eruption in Tonga Sinks an Entire Island, Creates a New One