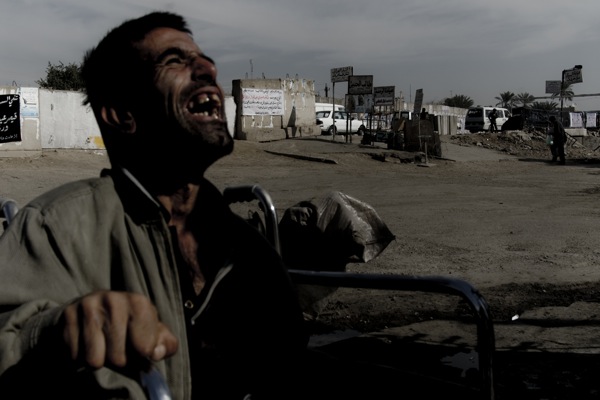 If a rocket hit, I decided I would run north half a block, up the hill.

There was an alley where a fallen concrete slab made an ‘N’ with the walls. I couldn’t see the alley anymore but in my head blazed a red-hot letter ‘N.’

A gibbous moon hung low over the four-lane artery soldiers called Route Rat, where a cluster of sidewalk stores ended a long stretch of rubble and crushed buildings.

As we hurried out of the Sunni grocery, the shopkeeper called to me: “Koosortek!”

In the States, mothers get it. In Iraq, it’s the sisters.

On the edge of the bubble of light a beat-up taxi, the token white with orange fenders, crept past a garbage fire in the middle of the street.

It was quiet and Baghdad didn’t seem like a ruined city.

The world stopped at the edge of the bubble.

Our voices sounded huge and the placelessness of their echo made it seem as if we could be anywhere in the world. Then the sound of the Arabs cursing behind me traveled under the loud benzene generator that sustained the isolating bubble of light.

“Did I miss something?” I asked the translator.

“They don’t like you man,” Babba Shawarma said. Shawarma rearranged his shirt sleeve to cover his withered arm.

We both got down on our bellies and felt around for bombs stuck to the underside of the van. Shawarma had borrowed it from his cousin, Babba Tawook.

I trusted Tawook because I trusted Shawarma. Plenty of Iraqis in Karrada knew Tawook regularly accepted money from the Americans. Still, the van rode pretty high.

“Be easy for those guys to stick something big under there,” Shawarma said.

I was interviewing Sunnis on the eve of January 31, 2009 because everyone expected Sunni bombs to flay the markets in the morning. In twelve hours, polling stations opened for the first provincial election ever held in Iraq.

The dust was kicking up. The sun was a white circle on a flat sheet of magenta sky. Weather was my excuse to wrap my head and take a car outside the wire.

Babba Tawook gave me a deal. For twenty dollars he would drive me around all day, anywhere except Sadr City.

Not Sadr city, when they see you there, they call their friends. No, but maybe he would take me to Wahshosh.

In the afternoon Tawook saw that my pistol wasn’t loaded and he refused to go to Wahshosh.

My empty pistol had got him thinking. At the end of everything, he doubled his price.

“Habebe,” he said, counting my crumpled bills, “You are American, and a scientist and I will bring at least one bullet for you next time. Mamnoon, habebe, mamnoon.”

I had predicted the weather: I was a scientist. I was born in America: I was rich.

Earlier that day we tried talking to women. There were some on the street. Not all of them were fully covered. None of them looked at us.

Tawook called the uncovered girls bitches. They like ficki-ficki, he said. We talked to a few of them. Tawook showed the beautiful one the wadded American bills in his money clip. Two of them at the same time would cost me two hundred dollars, Tawook said. “They are young. Very good,” he said.

All the uncovered women expected a bomb from al Queda or some other group in the morning. Quietly, one of the ugly girls said the Shi’a militants are just as bad, but no one else spoke after her.

The military newspaper and American officer friends said Sunni hearts have proven hardest in Iraq. Sunni sheiks in the Anbar province led a boycott of the first national election in 2005. Many have grumbled – and fired rounds – over each one since.

Composure is not valued among Arabs. I had already photographed victims of the market bombs at Baghdad hospital. A show of force has greater value in Iraq.

“Lee-esh?” I asked the driver, Babba Tawook, the used-car salesman with the scar below his eye.

“Why do Sunnis oppose elections?”

“Why have Iraqis turned on each other?”

The fronts were missing from all the buildings we passed. Desks and chairs were flipped over inside the rooms. There were squatters putting sheet metal flaps together to sleep under. The night was getting cold and the air had thickened with powdery sand. Thirty small squatter fires in the naked rooms made the outline of a backward-turning dog.

Iraqi reporters I ate with sometimes in Karrada said Sunnis were angry at the greater Shi’a numbers in the new government. Most Shi’a are looked at as uneducated, the reporters said. Sunni’s feel the lesser sect will have a greater say because there are more of them to vote.

For Tawook, the salesman, the womanizer, the numerologist, the answer was more mysterious and smoky, like Baghdad a thousand years ago.

“There can only be one strong man,” Tawook said with his burning cigarette held upright between his thumb and index finger.

I never finished the news video. Equipment broke on the helicopter ride the next day along with a lucky piece of polished marble from one of Saddam Hussein’s decimated peach-colored getaway palaces in the North Mountains.

The interviewees were loud. Spit was flying around in gobs. It was an easy edit.

The first minute set the pace.

I cut between shots of the store through its dirty, green plate-glass; close-ups of the store owner on a tirade; and a crooked train of women in Burquas passing by the window.

Many of those girls were wild. It came out in their walk – the shoulders and the hips.

Women in Burqua’s are “ninjas,” on army radio. As in, we got thirty ninjas coming up on left. Dunno if y’all are gamblin’ men but mah bets on a suicide vest, least one or two ah reckon. Double on that heavy gal in the back. She’s prolly ‘bout fity pounds naked.

We drove passed concertina wire barrier into the rundown Hateen Market area and followed the pale light and stink of warm fish to the store. The three tube lights made the inside of the store fluorescent. There were holes in the ceiling and very little on the shelves: bags of dates, strewn Bounty bars, rice and some cans covered in fine Iraqi dust. Customers were smacking the things on the shelves so the dust would billow off. When they saw the price, they shook their heads over it.

I asked the shopkeeper who he would vote for in the provincial elections.

Shawarma translated his answer back to me: “I don’t like any of the candidates. I do not want to be responsible for what they do.”

The shoppers noticed I was not Arab.

There was conviction in the shopkeeper’s voice. He was a 300-pound Sunni with a bald head, permanent frown and ball-glove hands that smacked the air when he shouted, “We have no services, nothing!”

Services are water and electricity. The man did not have reliable electricity or clean water. He had deep circles under his eyes and his clothes were unwashed. You could tell he wore them every day. “For years, this,” he said.

The shopkeeper’s fat face was tight. He was rearranging the warm, paper-wrapped meats in front of him. He said something to Shawarma in Arabic.

Shawarma’s pupils were dilated now and he was fidgeting more than usual. We were drawing a crowd.

Shawarma put his good hand on the big Sunni’s shoulder.

“Don’t talk to me like it’s my fault,” Shawarma said in slow, easy Arabic, that contradicted the look on his face. Shawarma and the big Sunni were talking real close now.

Tawook was talking to the rest. “Colooombiaano,” Tawook said, nodding toward me.

Outside the wire I was usually a mute Kurd. Today I was Colombian. Tawook did not want to present himself to the women with a Kurd.

Out of the back room, another humongous guy came shouting “Lah, lah, lah” pointing at my camcorder.

Shawarma talked fast for the next 30 seconds. His head flicked back-and-forth like a prize-fighter’s. His high-pitch Americanized Arabic floated over their bass arguments and hand-slapping. Shawarma is an Iraqi from New Hampshire. He is a wiry teenaged spaz, a clarinet.

The other guy kept pointing at the camera, pounding his fist on the counter.

“So much money and they do nothing. Look around, no light! Look at the sidewalk!” Big Sunni said, red in the face.

There was no sidewalk. It was dirt, rubble and garbage.

Shawarma’s damaged right arm ticked because two men crossed the street to ogle us, and one of them got on his cell phone.

No Iraqi who deals with Americans trusts anybody. I’ve been told the price on the head of any Westerner starts at $10,000. Americans bring in much more.

There was an arms-length piece of angle iron on the floor behind me.

Ten grand is a house forever and a harem for a week. Running water and ceiling fans, a refrigerator. Two women, three times a day, very young, very good.

The sight of the angle iron superimposed itself over the flaming letter “N” in my brain. Everyone was yelling in Arabic. There was always yelling. It was yelling first, then aiming and cocking, then a slap, then a stab or a gunshot at the feet, then more.

I couldn’t see what was behind the counter.

Pointing at both shopkeepers furiously, Shawarma tried to control the conversation.

I still don’t know when pointing is rude here. I have a stringy beard. I look around too much. Tawook said if I killed someone next week and let word spread about it, I’d have better chances in Baghdad.

Shawarma was arguing now, completely frustrated: ”You don’t want to vote for someone you like? What do you want, another dictator to rob you? Just for someone to blame?”

I knew that was the last question when the lights dimmed and the giant refrigerator that had been sputtering all night – the one I was leaning on – finally quit.

Then all eyes and blame fell on me:

Tagged
Travel Iraq
What did you think of this story?
Meh
Good
Awesome

This Was My Experience Visiting a Syrian Refugee Camp in Iraq

In 1977 My Dad Left To Work as a Locksmith in Iraq, Here's What His Journey Has Taught Me

Scenes From the Real Iraq

Notes Going Overland From Iraq Through Iran Into Afghanistan

What Happened To Babylon?

How To: Travel To Iraq Without Getting Killed