“NIMESHIBA, NIMESHIBA,” repeats Ian. I try ignoring his pleas and instead kneel and push the barely touched green plastic plate towards him, urging him to finish his lunch. I don’t blame him for not wanting to eat; I know I won’t touch the lunch of gooey boiled beans.

But just being a volunteer at the school, there’s nothing I can do to help him. The only way either of us is getting up from this dark room that serves as a kitchen, classroom, and lunchroom is if Ian finishes his lunch.

I like all the things I do at St. Peter’s, all except lunch duty. I’m not particularly overjoyed when it comes to force feeding children.

At the far side of the room, brown benches are pushed against the brick-faced wall. There’s a rectangular hole in the wall that unintentionally serves as a window. A steady stream of sunlight bursts through it and falls on a picture of the Kenyan flag pasted on the opposite wall.

In the tiny space between the benches, children ages four to sixteen are hunched over plastic plates overflowing with brown beans. Whoever seated them for lunch separated the mentally challenged children and the ‘normal’ children. I think that’s just plain wrong, considering St. Peter’s prides itself on being an integrated school, catering to the needs of the challenged students along with the rest.

Abruptly, there is silence in the room as darkness descends on the Kenyan flag.

I look up to see the silhouette of Aunty Rose, school mom and cook. Her hands are on her hips, her well-endowed figure blocking the sunlight. She bellows at the children in Kiswahili while they hunch closer to their plates. One of the girls, Bridget, opens her mouth with a wail. Aunty Rose strikes her and stuffs a spoonful of beans into her open mouth.

It’s not a pretty sight. Aunty Rose is a kind person at heart. She cares for the children at St. Peter’s like they’re her own. But when she spies unfinished lunches, she transforms into a monster. 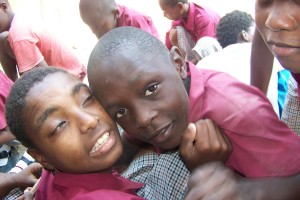 Beside me, Ian trembles. I pull over the only chair in the room and shield Ian from Aunty Rose’s wrath. Unfortunately, this makes him invisible only for so long. Aunty Rose calls out to him with a thunderous roar and starts over to our corner. Ian lets out a wail as she raises her hand to strike.

All at once, Boniface appears. In one swift motion he comes between us and Aunty Rose and grabs the plate from Ian with one hand. He wraps his other arm protectively around his four-year-old brother.

Boniface is ten years old, tall with twinkling eyes. Spelling, reading, and counting are difficult for him. He sits in the same class as his brother — my class. He depends on his four-year-old brother for all his classwork.

Boniface is mentally challenged, but no disability can tamper with his love for his younger brother.

Boniface whispers to Ian, who rests his head against his brother’s chest. Boniface waits until Ian’s sobs quiet. Gently he unwraps his hand. Ian opens his mouth to receive a spoonful of gooey beans from Boniface.

Aunty Rose’s arms, momentarily paused mid-air, descend and circle the brothers in a bear hug. I do not bother hiding my tears either. I feel proud to be Boniface’s teacher.

Tagged
Travel Kenya
What did you think of this story?
Meh
Good
Awesome

Airbnb’s most wish-listed properties in all 50 states
The 25 coolest towns in America to visit in 2021
8 things to consider before buying travel insurance during a pandemic
This hotel lets you name your price and more — will others follow suit?
14 airports where you can get tested for COVID-19 in the US

On guns, fear, and the people you meet in Northern Kenya