The story goes like this: Emmy winning producer Brook Silva-Braga left his cushy gig with the TV network HBO to travel the world with five pounds of clothes and 30 pounds of video equipment.

He left because he wanted to experience the “round-the-world” trip, before life caught up with him and the window of opportunity would be lost forever.

Brook documented the entire journey, and created the soulful film about the experience – titled A Map For Saturday.

I confess. I didn’t want to like the film before I watched it. On some level, I felt the world of backpacking was selfishly my own. To have a filmmaker delve into this world, on his own journey of discovery, felt like he was encroaching on my own experiences.

Turns out: the film is excellent. Beautifully shot. Artfully edited. And profiles what life is truly like on the road.

I felt compelled to contact Brook for an interview about his film. Here’s what we discussed.

BNT: What was the hardest part about deciding to leave your job and travel the world?

Brook: There weren’t negative judgments, really. Everyone was supportive, they just all had reasons why it wasn’t right for them. The only reason I could think of not to go was the damage it could do to the career I’d been working for.

So making the documentary was a way to not feel like I was totally throwing that career away. Overall the decision wasn’t that hard. I got it in my head that an around-the-world trip was something I had to do before I died and this was the best time to do it.

Were there certain pre-conceptions you had about long-term travel and life on the road, that turned out to be totally different than you expected?

I thought it would all be a lot harder than it was. One of the first revelations of my trip was how easy long-term travel can be. The flip side was the loneliness I sometimes felt and probably didn’t fully expect before I left. 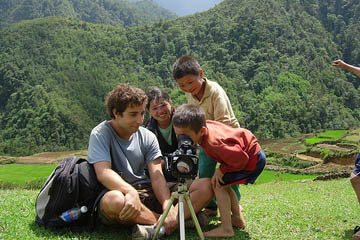 Like I said, the documentary was really just a way to convince myself the trip wasn’t such a professionally destructive enterprise.

It was a bit of a fools bargain though because these types of independent films have a lot of trouble finding an audience. My ignorance was probably really helpful and I just ended up getting really lucky that it did so well.

What were the biggest challenges of carrying all the gear with you on the road?

Well it meant I had to be pretty ruthless with my packing of “discretionary items.” I only had about five pounds of clothes and no tent or even sleeping bag. But I found there’s almost nothing you can’t get by without.

At one point in your film, you talk about how Americans are conditioned to “binge vacation” – that is, cramming their escape into 2 weeks per year, before coming back to the daily grind. Why do you think Americans trade their free time for money/job security?

It’s in our culture. I read awhile ago that the hourly productivity of American and European workers is equal but we’re richer largely because we work more hours.

The most powerful evidence in support of long-term travel is this: I’ve never met someone who gave it a try and didn’t like it.

I just came from Africa where there’s clearly a prioritizing of free time over work despite the poor economic conditions so many Africans face.

There’s no simple way to explain why one culture develops one way or another, just look at how much more common long-term travel is for Canadians than Americans despite all the connections between the U.S. and Canada.

But America’s hard work has given us a prosperity that allows us to enjoy more free time if we curtail our consumption. The lure of consumption must be great (or perhaps people are unaware of the joys of personal time) because there sure is a lot consuming going on.

Who benefits from pushing that type of mentality?

Well you seem to be leading me towards an economic/sociological judgment that I’m probably not qualified to make. On a macro scale, certainly our country’s economic strength has been created by the commitment to work (and consumption) of Americans. My personal experience though is that I’m happier when I work and consume a bit less.

What’s the most effective way to show other people that long-term travel isn’t so scary?

Well I suppose it depends on the type of fear. My sister is afraid of dirty hostel bathrooms. Some friends are afraid of not having a home to return to at night, or a job to go back to at the end of their trip.

To me the most powerful evidence in support of long-term travel is this: I’ve never met someone who gave it a try and didn’t like it. It’s only people who don’t go who can list all the problems with it.

You’ve just got back from a 5 month trip to Africa working on your next documentary. Any hint as to what’s it’s about?

Yeah, its going to be called “One Day in Africa” and follow five or six people from different parts of the continent on a single day in their life.

There’s a college student, a rural farmer, an expecting mother. My hope is to show a more nuanced version of life in Africa than the devastatingly dire or falsely hopeful stories we see so often.

It should hit film festivals in early ’09 and a trailer should make it to cyberspace this fall. I need to go edit!

For more Brooke Silva-Braga, check out his personal site and the film A Map For Saturday.