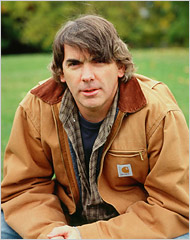 Chuck Thompson is a travel writer who knows controversy. His recent book “Smile When You’re Lying: Confessions of a Rogue Travel Writer” is a unabashed peek into the seedy underbelly of the travel writing industry.

From editor’s too afraid to publish quality writing for fear of angering advertisers, to the copious amount of freebies given to writers for favourable words – the truth is an ugly place.

We recently reviewed the book here at BNT, and enjoyed it immensely. Others found it problematic. But all agreed it’s a provocative and enjoyable read.

I caught up with Chuck for some follow up questions that had been simmering in the back of my mind.

BNT: In your book you write that most mainstream magazines “exist for a single purpose-to move product, or, less artfully, to sell shit.” In your mind, was there ever a golden age of writing in mainstream travel magazines? If so, what changed?

CHUCK THOMPSON: I doubt there was ever a “golden age” for travel mags. What happens more often is that new magazines pop up here and there trying to establish a new template for the genre or in some way distinguish themselves from the pack, through honesty, irreverence, edgy photography, whatever.

I worked for a magazine out of L.A. for several years called Escape. Escape was sort of the Lonely Planet of magazines, at least insofar as sharing a general sensibility and favoring off-the-track destinations.

But Escape met the same fate as most non-mainstream travel pubs-it just couldn’t attract enough big ad accounts to keep it going. The magazine folded in 2000 after about seven years. A real shame, but that seems to be the way these things go. Escape is still probably the best travel magazine I ever wrote for.

First, the triumph of PR. Doesn’t matter if it’s covering politics, sports, music, business, travel, whatever, the mainstream media is generally (some exceptions) content to allow the agenda to be driven by organizations with a financial or political stake in the “news.”

Second is the discouraging trend over the last decade of media rolling over for high-end advertisers (and by no means is this limited to travel media), as though the entire country were Robb Report material.

Aspirational advertising has always been a part of publishing, of course, but never more so than today when people launch or redesign magazines not according to what readers want, but according to what high-end ad accounts they can attract. Believe me, that’s how it works. I’ve been in the meetings at more than one magazine and they’re all exactly the same.

Is there a way out of this scenario? Should magazines strive to find an alternative business model rather than being dependent on advertisers to finance their writers?

It’d be nice to think they could break that dependence, but I don’t see it happening. Part of it is economics-if you sacrifice ad dollars, you need to find them elsewhere-but part of it’s an institutional mindset.

For example, travel editors have to scratch, claw, and beg to get a lousy $50 added to an expense budget because a writer has to spend an unplanned night in some fleabag hotel after his flight home got cancelled. Meanwhile, a couple ad account reps blow $1,200 on a champagne lunch with clients. I use this example because it’s a scenario I was part of-I was the begging editor.

I’m also not trashing ad account reps. They have BY FAR the toughest job at any magazine. You ever try to sell media? It’s a bitch. Believe me, you don’t want that job.

Account reps aren’t overpaid. It’s just that editors and writers are grossly underpaid. If you could see what a large, successful magazine nets each month, and then look at the pittance doled out to editors and writers, you’d cry. It’s criminal.

Travel writers today generally make $1 a word (some exceptions). That’s the same rate they got paid in 1980! Babysitter’s fee have quadrupled in the same amount of time.

So, in some ways, insofar as travel writing goes, you get what you pay for. My advice if you want to make money in magazines? Go into advertising.

What do you think would happen if travel writers were free to tell the truth? That some experiences were poor, and all hotels aren’t perfect? Would the readers value the authenticity of the writing? Would advertisers freak out and pull out their dollars?

Readers would value the authenticity of the writing. Advertisers would freak out and pull out their dollars. Bye bye, magazine.

But it’s not fair to lay all the blame with the advertisers. Why should they fund a magazine that takes pot shots at them? It doesn’t make sense for, say, Four Seasons or Northwest Airlines or whoever to advertise with a publication if there’s a danger that the publication will trash one of their destinations or corporate partners.

Well, guess what? The country’s Chamber of Commerce or some well-connected business group went apeshit over this perceived insult and their indignant screams went up to the national government level and then to the airline’s executive offices.

This was a big deal, because every airline has to maintain good relationships with governments in order to negotiate for airport gate space, favorable arrival and departure times, etc. The crisis over that story was eventually soothed, but not without a lot of trouble that filtered down to the magazine and its writers.

It just doesn’t make sense for major corporations to risk offending anyone when hundreds of millions of dollars could be lost because some snarky writer getting paid a buck a word wanted to inject a little local color.

It just doesn’t make sense for major corporations to risk offending anyone when hundreds of millions of dollars could be lost because some snarky writer getting paid a buck a word wanted to inject a little local color.

And then there’s the fact that we live in an extremely uptight, ultra-sensitive culture right now, one in which public honesty in general is stifled and any public figure or entity has to walk on eggshells around any sort of opinion.

Most of the email I get from readers is positive, but you should see what happens when you simply mention that you’re not a fan of Rushmore or Graceland. “Terrorist! Faggot! European!” Those were the nice things I was called.

For me, it’s fine, I’m just a single writer. I don’t particularly like being insulted this way, but, you know, it’s part of the gig, I can deal with it.

Unless your name is Clinton or Limbaugh or Grisham, no one asks you to write a book, so you’re pretty much obliged to take what comes when you put yourself out there like that. But a mega-corporation with billions of dollars at stake and shareholders to please can’t afford to be so cavalier.

And that’s one of the great misunderstandings about travel. The billions at stake. You and I experience travel in the most personal possible way. But in the larger context, it’s a global industry so massive that it’s net worth can’t even be properly calculated.

Depending on the year, it’s usually the world’s largest money maker after petroleum exports. As an employer, it’s certainly the largest industry on the planet.

Judging from the fact that glitzy travel magazines are the majority, are their editors merely “giving readers what they want.” Do you think readers actually prefer fluff, or have they just been deprived of quality travel writing?

There was a review of my book on the Internet that made, to me, the astonishing and ill-considered claim that readers were as much to blame as writers for the shortcomings of the genre. I couldn’t disagree more.

When my writing or editing has failed, I’ve always assumed it was my fault for not doing a better job of reaching my audience. I don’t like blaming readers for shitty writing, but that’s a more prevalent view among writers and editors than you’d imagine.

The short answer: Readers deserve better than what we’re giving them. That’s the title of the introduction to the book, actually: “You Deserve Better.”

A travel writer friend of mine said “quality travel stories ARE getting told, we’re just not making any money in the telling.” By that, I think she meant the internet has allowed a venue for authentic, gritty travel stories – but the problem is monetizing the content to support these writers. What do you see are the challenges for getting the word out about these alternative travel websites? Are they in fact, the only hope for quality travel writing?

I’m not the person to ask. I’m online everyday and regularly hit a few websites and some of the content is indeed great, but I’m neither interested in mining for nuggets of quality amid the dreck nor monetizing the content.

The fact is, I like print. I believe its demise has been greatly exaggerated. For portability and tactile pleasure and saving my eyeballs, I prefer books, magazines, and other hard copy to reading on a monitor.

Blogs are already a large part of the legit media mix. Great. I’m all for it. But they aren’t going to replace mainstream media anytime soon, financially or otherwise.

Given the mixed reviews on the aim of your book, how would you clarify your message?

The thing most interviewers and reviewers have focused on with this book is my critique of the travel-writing racket. That’s understandable, but the book is really more of a memoir masquerading as a travel book.

My primary goal was always to make it funny, entertaining. And what entertains me is humor, opinion, insight, solid anecdotes, and maybe a few poignant moments. Everyday while writing I asked myself, “Is this funny?” And if it wasn’t, it was gone, even if I’d spent weeks or even months refining it.

I figured that given the cover of the book, the chapter titles, and the fact that there’s a bit of humor-or perhaps more accurately an attempt at humor-on virtually every page, this intent would have been pretty obvious. But some people haven’t understood the book that way, and that’s surprised me.

Now, if you don’t think it’s funny, or it sucks, I can live with that. But it’s weird to me that the attempt at levity has been lost on some people.

Then again, as I say in the second chapter, by junior high I realized I was destined to live on the moral fringes-I have yet to vote for a single candidate in any city, state, or federal election who has ever won anything-so I probably shouldn’t be so surprised.

And, anyway, there are worse things to be than not laughed at.

Read more Chuck Thompson on his website and our review of his book “Smile When You’re Lying: Confessions of a Rogue Travel Writer.”

Ian MacKenzie is editor of Brave New Traveler. Aside from writing, he spends his time exploring the fundamental nature of existence and wishing he did more backpacking.
Tagged
Travel
What did you think of this story?
Meh
Good
Awesome