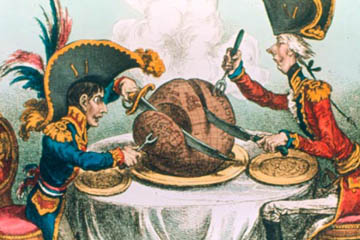 Carving up the globe. Image from Emory Libraries

I sometimes find myself at odds with the concept of nationalism. This is much more apparent when traveling abroad.

Suddenly, it’s easy to believe that, as an ambassador for your country, you have certain immutable qualities shared by all people from your humble area of the planet.

Canadians are polite. Americans are arrogant. Germans are efficient. The list goes on.

That’s the relatively benign side of nationalism.

The ugly side manifests itself as the belief that your people are somehow “chosen” in the eyes of God, or the universe. And with the declaration of “you” the idea of “them” quickly follows. A separation grows between the shared human community.

As Carl Sagan wrote in his1974 book, Broca’s Brain:

Much of human history can, I think, be described as a gradual and sometimes painful liberation from provincialism, the emerging awareness that there is more to the world than was generally believes by our ancestors. With awesome ethnocentrism, tribes all over the Earth called themselves “the people” or “all men,” relegating other groups of humans with comparable accomplishments to subhuman status.

Such views or their equivalent are only slowly changing, and it is possible to see some of the roots of racism and nationalism in their pervasive early acceptance by virtually all human communities. But we live in an extraordinary time, when technological advances and cultural relativism have made such ethnocentrism much more difficult to sustain.

The view is emerging that we all share a common life raft in a cosmic ocean, that the Earth is, after all, a small place with limited resources, that our technology has now attained such powers that we are able to affect profoundly the environment of our tiny planet.

With that in mind, consider the following question:

What good is nationalism in a global society?

Let’s get the discussion going. Share your thoughts in the comments!

And if you’ve got an idea for upcoming “Ask The Reader” questions, send me an email.