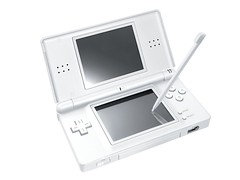 Picture yourself sitting in a train station, airport, ferry dock, or somewhere similar, with hordes of people going about their business. They’re boarding, disembarking, buzzing, or like you, they’re waiting. Endlessly waiting.

One of the travel realities that’s rarely revealed is the amount of waiting that accompanies every type of journey.

I remember in Thailand, I had taken a bus from Bangkok to the southern coast, arriving in the terminal sometime around 4am. It was unbearable hot, pitch black, and nothing was open. It was too muggy to sleep and I was too hungry to read a book.

In short, it was a mildly hellish 5 hour wait until morning when the ferry arrived. If only I’d had something more effective than a book for distraction, it might have made the time more bearable.

Enter: the Nintendo DS. I’ll be honest with you – like all adolescent boys, I used to be addicted to video games.

Luckily, I outgrew that practice in my early 20’s. Sure, I’d play video games now and then at a friend’s place, but for the most part, I left the pixelated world cold turkey.

So recently, when I tried the latest Nintendo DS, I was skeptical. (Full disclosure: I was sent a free review copy). Had video games really changed that much in the past 6 years? Would I really want to pack one of these in my backpack for guaranteed distraction on the road?

When the box arrived, I unpacked it with suspense. First impression: it’s sexy. Nintendo has definitely been taking design lessons from Apple, borrowing their white graphite aesthetic.

Second, it’s a marvel of technology. I remember when the original Gameboy weighed 8 pounds and sported one dismal black-and-white screen. This newer version is a fraction of the weight, and the dual screens are a beautiful site to behold.

Third, it comes with a stylus. Yep, it’s utilizes touchscreen. I couldn’t believe it myself. It’s like having a Blackberry — only one that you can’t get business calls from and forces you to play games.

Speaking of games, the Nintendo DS came with a copy of Brain Age. You may have heard of it already, as it was apparently one of the top-selling games in Japan.

It’s basically a combination of brain-sharpening activities that test your mental prowess, such as high-speed multiplication, reading exercises, brain teasers, puzzles, and even a version of Sudoku.

If it sounds mildly interesting, it’s not. It’s actually a blast.

Or at least, that was my wife tells me. Ever since we got it, she’s been playing it more than I have.

Maybe it’s the curious combination of competition and the promise of a better brain that makes Brain Age so addicting. Or maybe it’s the fact that the game is narrated by a jovial Japanese professor who cracks jokes and urges you to develop your “pre-frontal cortex.”

Either way, I’ve decided to do what I never thought possible. On my next trip, in anticipation of the agonizingly inevitable waits I’ll be forced to endure, I’m going to pack along the Nintendo DS.

Because you never know when you’ll need an escape.

Ian MacKenzie is editor of Brave New Traveler, and co-founder of the blogging community TravelBlogger. Recently, he also began offering website marketing consulting services specifically for travel websites and service providers.
What did you think of this article?
Meh
Good
Awesome
Bookmark
Posted In
Travel