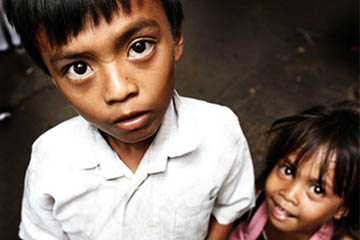 From time to time, I’ve posted various articles directly asking the readers to give their opinions: from “did you achieve your travel dream?” to “what’s the worst thing that’s attacked you?”

The issue I’m asking is the age old dilemma faced by many travelers in poorer countries of the world.

We’ve published a few articles in the past on this issue, including:

One camp usually says “Yes, it’s the least you can do for their suffering.” While another steadfastly believes “Giving to beggars only perpetuates the problem!”

But imagine, for a moment, the situation as it usually happens. You’re high on life, exploring a new city street for the first time, eyes never resting as you survey the colours, hear the sounds…until suddenly, you’re confronted by a voice.

You turn. It’s a person. A human being. They softly ask you for money…to help their child get food, to replace their leg blown off my a land mine. They ask for money because they know you have it.

Your mind races over a number of questions: is this person really poor? Are they faking it? Will my money make a difference? I’m just a tourist, why is this my business?

Or perhaps you feel guilty. After all, you’re living it up on vacation. You have so much and this person has so little. Will you really miss a few dollars from your pocket?

When you’re face to face with a very simple question, the answer becomes more complex.

How do you decide whether or not to give to beggars?

Let’s get the discussion going. Share your thoughts in the comments!

And if you’ve got an idea for upcoming “Ask The Reader” questions, send me an email.