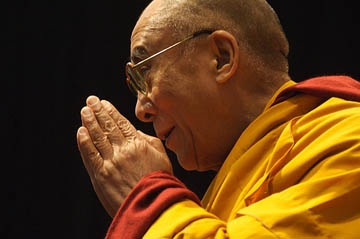 If you’ve seen the Dalai Lama live, or even online, you can tell right away he’s “real.”

By real I mean he offers no reason to treat him any different than “a simple monk” as he’s fond of saying. His tradition is Buddhism, but his religion is “kindness.”

You’d think his message of universal peace would be enough to warrant his popularity. Yet as Stephen Schettini writes in The Metropolitain, perhaps the real reason for the Dalai Lama’s superstar status is actually: Buddhism.

Visitors to Asia may perceive Buddhism as old-time religion, complete with invisible beings, superstition and intolerance, but scratch beneath the gaudy veneer and you find a thoughtful, healing and wholesome system of thought and daily practice.

In an age when religious faith is on the decline and people are having trouble swallowing its hollow residue, Buddhism offers a spiritual path that’s compatible with scientific enquiry, and perhaps even with twenty-first century realpolitik.

I’m reminded of a recent scene from the awful “Angels and Demons” film – when Ewan McGregor’s priest character is pontificating to the other church clergy about how “science and religion don’t have to fight! They can work together!” However clumsily, the message is meant to answer the age-old dilemma that is suffered by the Abrahamic religions: how to maintain “blind” faith in the age of Reason.

Buddhism, at least in the form popularly adopted by the West, doesn’t have this dilemma. There is no schism between science and religion – and this is key to understanding Buddhism’s popularity. As Stephen Schettini points out:

The Dalai Lama noted three crucial parallels between the Buddhism and modern science. They 1) share a deep suspicion of any notion of absolutes, 2) believe in universal natural laws of cause and effect and 3) depend on an empirical method. You can go a long way on those three premises.

Add to this the Dalai Lama’s brand of inner peace and simple wisdom, and it’s likely he’ll be in the spotlight for some time to come.

As one blogger says “He’s a religious guy who doesn’t support killing or hating people for God. It’s a big improvement.”