…the more it becomes clear that to be is to quarrel and pursue your self-interest, the more you are compelled to recognize your need for enemies to support you. ~ Alan Watts

I’VE BEEN READING “The Book” by Alan Watts lately. It’s one of those books (for me, anyway) that needs to be read over and over again for the message to sink in. It’s not easy to penetrate but when one starts to get the overall sense of what he is saying it becomes quite profound.

What I am getting out of it is that, despite us thinking that we are these individuals that exist as separate beings from each other and the world, we are actually defined by our surrounding environment (and, hence, part of the whole).

It brings to light how necessary even “enemies” are in order to identify ourselves. I can’t be a nice guy if there are no jerks around. With this in mind, last night I watched the media report on the riots that took place in Vancouver after game 7 of the NHL’s Stanley Cup playoffs.

Being from Vancouver and a lifelong Canucks fan, it hurt me like hell to witness the car fires, window smashing, fighting, and looting that was happening on the streets that I was walking just a few days prior. 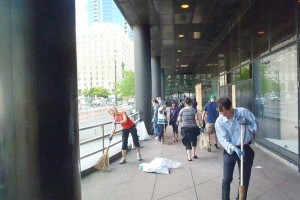 Like most residents, I’m sure, I felt ashamed for the city and embarrassed to the world. Then I logged into Facebook. One of the first posts on a friend’s wall I saw was an event called Post Riot Clean-up — Let’s Help Vancouver. It was an open invite for anyone to join in at 7 AM the next day to help clean up the streets in the downtown core. When I first saw it — within a couple hours of the riots starting — there were 8500 people attending (at the time of writing almost 20,000).

A post to the wall late in the afternoon said, “The city is so sparkling clean, thanks to everyone who did such a wonderful job! I got there at 10am and there’s not a speck of garbage left. Yay Vancouver!”

Another Facebook group called True Canucks Fans has popped up, their mission being to show everyone that the real Canucks fans have integrity (their logo includes a picture of Boston in front of the Stanley Cup with the caption “Congratulations to the Bruins”) and also to help support the local businesses that were affected by the rioting.

Nothing unites a community so much as common cause against an external enemy, yet, in the same moment, that enemy becomes the essential support of social unity. ~ Alan Watts

Without a question, the rioting that occurred in Vancouver was a major tarnish to the city and it unfortunately overshadowed the great season the Canucks had. But with that happening, it also offered the opportunity to the residents of the city to define themselves.

Against the contrast of the looters and hooligans, the caring and compassionate emerged. Without the haters, there are no lovers. Despite our disdain for those responsible for the mayhem, we are all part of the whole.