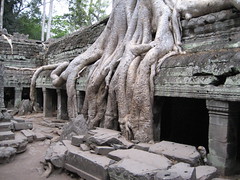 Since Halo 3’s long-awaited debut I’ve been living in a virtual reality.

I accompanied my boyfriend to the game’s midnight release and, comparing his passion for video games with my passion for travel, I considered the following question:

“Why would you spend $1000 dollars to sit on a plane for 12 hours when you can spend $50 for a video game and be transported to another world in an instant?”

I’m speaking of a digital world.

I’m sitting on my boyfriend’s leather couch with a wireless controller in hand and, with a few pushes of a button as he logs us into X Box Live, I am in that new world. 50,000 other players are with us in this virtual reality – from all corners of the globe.

I hold a gun in my right hand as I walk down a stone corridor in some kind of forested temple. This is my virtual reality but one that I completely buy into-albeit temporarily.

Guns and enemies aside, I feel like I know this place. I have been here before: Angkor’s Ta Prom temple, where the Tomb Raider movie (inspired by another video game) was filmed. This virtual reality reminds me of Ta Prom so much it’s a little frightening.

Maybe world travel and virtual reality video games are not so dissimilar. There are several games-old and new-that ask us to be informed about the world.

I can’t help but be reminded of Crazy Taxi (Sega) when walking the streets of any major city in Southeast Asia. SimCity allows users to recreate ancient civilizations. Prince of Persia (X Box) and Discovering Babylon (California’s Learning Federation) posed as entertaining and educational tools to teach us about the world and historical moments in time.

An article in the Washington Post reported that shoot-Ã¢â‚¬Ëœem-up video games prepared real soldiers for the war in Iraq.

Other forms of virtual media like the Travel Channel and GlobeTrekker TV (PBS) show viewers what it is like to be somewhere else when they are really in the comfort of their own home.

There is no easy answer as to whether virtual media cures or causes depression. There is evidence to support both claims.

Why spend the time and money to travel the world? For some, the choice between real and virtual travel can be difficult. For me, however, the choice is very simple.

Virtual reality is ultimately a poor substitution for the real thing.

Virtual reality is ultimately a poor substitution for the real thing. Nothing can truly compare to the actual feel of a place.

To witness the sunset from atop Angkor Wat is an experience that can’t be compared to seeing it on a TV screen. To struggle for words in a foreign language in a place not your own is a real-life challenge.

In a video game, you have an infinite number of chances to get it right-you can die a thousand times over and not be dead. Right here, right now, we each have just one chance to live well.

On the afternoon soon after the release of Halo 3, my boyfriend and I had planned on going surfing. Instead, we sat on the couch for three hours “killing” his friend in California through X Box Live.

“One more game,” he said, picking up the controller again. I gave him a cold, hard stare and he understood the problem. We had gotten lost in a virtual reality.

We lost track of time and, in this world-the real one, time is the most valuable thing we have.