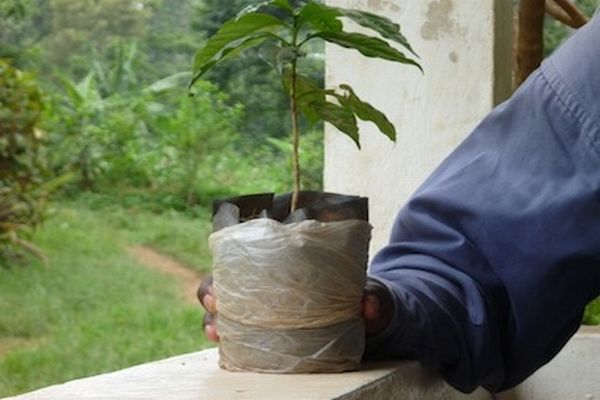 On a recent trip to Kilimanjaro, Jenna van Schoor joined an expedition team from South Africa on a mission to create awareness about climate change, and to highlight how it affects coffee farmers at the base of the mountain.

The lady with the white bandana headscarf, the farm owner, cuts the stems of the coffee shrub with a pair of chunky, heavy, silver scissors. It takes a few seconds for the thick blades to cut through the fleshy stem, making a thkk-crrrk-click noise as the dismembered branches separate from the plant, fall, and get stuck between the other remaining branches below.

Mike, our guide at Kahawa Shamba, which means “coffee tour” in Swahili, explains that she is cutting off stems with hard, blackened coffee cherries that have been affected by a disease known as CBD, or Coffee Berry Disease. He says that the increasing temperatures here at the foothills of Kilimanjaro, at an altitude of 1000-1200m, are contributing to the increase of these kinds of coffee plant diseases.

As I look up into the thick fog that hides the mountain from view, I remember the copy of Ernest Hemingway’s The Snows of Kilimanjaro, next to my bed at home. On the cover picture, the entire dome of Kibo Peak, the visible mountaintop of Kilimanjaro, is covered in snow, or more precisely, glaciers. Earlier, on the drive into town from our hotel, past the dry, almost dust bowl plains that surround the foothill town of Moshi, we could only see a few slivers of white on the dome.

In the villages that surround Kahawa Shamba at the foothills of Kilimanjaro, the glacial melt from Kilimanjaro has sustained independent farming for many decades. But today, as the white glacial streaks on Kibo slowly fade from view, less and less water is available to these farmers for irrigation. These farmers, who are predominantly Chagga, grow various produce in the area besides coffee, including bananas, avocados and yams. All these plants grow in a self-shading nursery plant system, as opposed to the rows of commercial coffee plantations further away, which grow on deforested land.

Except for a few visible lines of coffee seedlings neatly organized across from a white-washed wooden hut, these coffee shrubs are almost invisible in a humid haze of banana leaf fronds, with prolific camphor trees creating dense foliage canopies above them. And, in between these dense plantations live hundreds of other independent farmers, many of them contributors to the Kilimanjaro Native Co-operative Union, or KNCU.

KNCU has been in existence since 1933, when Governor Sir Charles Dundas set up a co-op for Chagga farmers in the area. Today the co-operative is made up of 68 primary co-operative societies, who all sell their coffee through KNCU. All farmers are trained in sustainable farming practices, and some of the smallholdings are certified organic, and use only organic pesticides, like the concoction the farmers make from cattle urine.

These co-operative farms supply various countries with 100% Arabica coffee beans. Every week, these farmers bring their coffee to the co-op headquarters to be sold by bag, where it is auctioned off at the KNCU auction house in downtown Moshi, and sold for export. 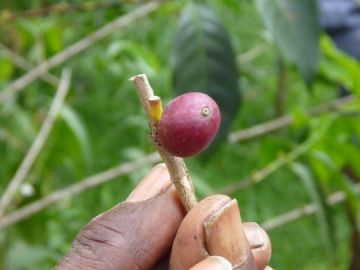 At Union Café in Moshi, in an alliance between entrepreneurs and co-operative managers, coffee is sold directly to the public, and is a place where farmers can also see how their coffee is packaged and sold. Union Café, the meeting point for the Kahawa Shamba coffee tours, also aims to create awareness about the coffee farmers and encourage local tourism.

However, in recent years, crop yields have decreased, which has been attributed to climate change. The sad reality is that is will impact heavily not only agriculture, but also local tourism, as the glacial melt streams that supply water further down also provide essential drinking water on Kilimanjaro climbing expeditions, which employ many of the local population as porters, cooks and mountain guides. Already, tour guides like Mike at Kahawa Shamba are only able to guide coffee tours once or twice a month, as other qualified people in the area also compete for the same position.

But as dire as the threat of climate change is for the coffee farmers, I can’t help but think that their lives are the most sustainable I have ever seen. Their reliance on subsistence farming means they eat fresh food, and don’t seem to rely on carbon unfriendly packaged food like I do. Their lives seem part of a consistent exchange cycle of use and give back that I feel so disconnected from.

Before going on the coffee tour at Kahawa Shamba I hadn’t even know what a coffee shrub looked like, so I was fascinated to see how the process of coffee making could be done without the need for electricity and with only the help of a waist-high pestle, large mortar, a half-cast iron pot over a fire and a small, plastic mesh sieve.

At this last stop on the tour, where coffee was made from scratch, and we saw how coffee berries were crushed through a hand-cranked grinder, I notice a thick, thumb-sized, grey slug, slowly edging itself up along the metal sides of the grinder. Obviously an unwanted intruder, the same lady with the white bandana quickly snatches up the slimy, grey shell-less snail onto a red flip-flop, holding it out for us to photograph.

Maybe its only an isolated, rogue pest incident, but it makes me think that even with the frightening threats of climate change becoming a reality in the area, and the necessity to do something about it, there would always be an element of natural intrusion that people will need to control.

You can visit Union Café on Old Moshi/Kibo Road in Moshi, Tanzania to take one of these coffee tours, or to find out more, visit their website: www.kahawashamba.co.tz.

A quick Google images search of “climate change” will give you photos of melting glaciers and rising sea levels, but what about the effects of climate change that one might not have considered or even known about? Julie Schwietert Collazo’s article, 3 Effects of Climate Change You’ve Never Heard Of explores some of these other possible ramifications.

Tagged
Travel Tanzania
What did you think of this story?
Meh
Good
Awesome

Across the ravaged land

24 hours in a Maasai Village [PICS]