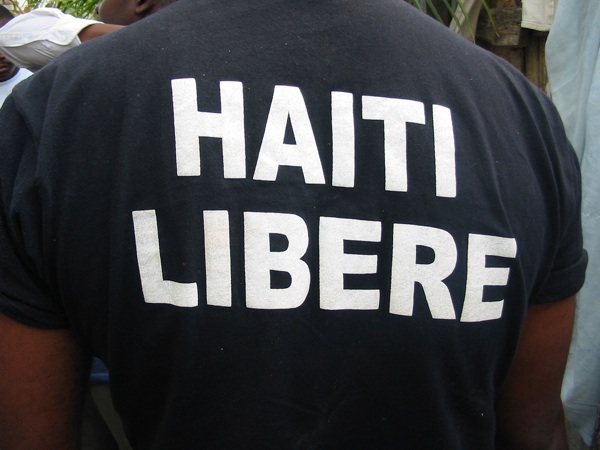 Critics of Twitter dismiss it as a platform for mindless, navel-gazing chatter. They clearly haven’t been following any of the people on this list.

All of the people on this #FollowFriday list have played an important role in informing their followers about Haiti. Some approach their tweets from an historical perspective, others with an urgency informed by their on-the-ground experiences in Port-au-Prince and other Haitian cities.

Some share their stories visually, others mobilize people with their passionate, energetic words. All of them are worth following, though, because of their ongoing commitment to help the rest of the world understand and care about Haiti, and compel followers to take action.

Folks Who Provide Backstory and Insight

@Anita5446:
In her doctoral studies, Anne explores popular thought and the connections between Dominicans and Haitians in the 1800s, overwriting what has been too often an anti-Haitian story in the east. Somehow, she manages to distill all her knowledge into digestible 140 character bites that make sense even for a Haitian history novice.

She’s also an excellent source of information about news and cultural events related to the Caribbean and the diaspora.

@RAMHaiti:
If Richard Morse doesn’t follow you back, don’t take it personally. He’s too busy dropping knowledge on Twitter directly from Haiti.

Richard Morse is an anthropologist AND a new wave/punk musician. Though born in the US, his mother was Haitian, and he moved there more than 20 years ago.

If you could go back to three and a half weeks and read all of @RAMHaiti’s tweets, you’d have a crash course in Haitian history and a pretty damn good sense of what the challenges are on the ground right now.

Both of these photographers have been on the ground in Haiti since the quake and their photos serve as crucial visual documentation of disaster and recovery. Antebi had also worked in Haiti before the quake, and his photo essay, “Port-au-Prince Before the Quake,” was published on Matador a couple weeks ago. Cowart just returned from Haiti this week and may be sharing photos with Matador in the coming weeks.

Both photographers, while on the ground in Haiti, updated followers on what they were seeing through their lenses. Antebi has been releasing limited editions of his photos, with proceeds going to Haiti relief efforts.

Connectors and People Who Get Things Done

@MelyMello:
Toronto-based Melissa Elliott exemplifies the positive power of social media. Her day job with Blackbox Communications has her focused on messaging, and she’s brought all of her professional skills to bear on getting out the word about relief efforts and serving as a powerful connector of people with information, resources, and the ability and energy to help.

@ShaunKing:
Featured earlier this week on MatadorChange, Shaun King continues to give his all to cutting through red tape and getting aid to Haiti. He’s currently focused on helping get temporary shelters to Port-au-Prince.

@amadril:
Quite simply, a one-woman tweeter rounding up information and news that serves as a daily digest of what’s happening right now in Haiti.

@LouisOxfam:
Louis Belanger, Oxfam’s humanitarian media officer in New York, was on the ground in Haiti immediately following the quake. His tweets continue to inform about relief efforts, and not just those headed up by Oxfam. Belanger also maintains an excellent, informative Posterous blog with entries from aid workers and journalists in Haiti.

In addition to my recommendations, Matador member AyeGotPassport has organized a list of Haiti tweeters worth following. She also mentions @lindsaybranham, @EstherHavens @ijeanson @jonathanolinger, all of whom she follows because “of their courage to do what they do and to provide support/encouragement in the process.”

Who would you add to our list? Please let us know by leaving a Twitter handle and your reason for the pick in the comments.

What did you think of this article?
Meh
Good
Awesome
Bookmark
Posted In
Travel
Destinations
Haiti

Haiti in View: Widowed by the earthquake

Haiti in view: Port-au-Prince at night

These are the faces of people I met in Haiti

We need to see more images of Haiti like this one

The West, not Hurricane Matthew, is the true devastator of Haiti

On healthcare as an inalienable human right: One doctor’s story from Haiti