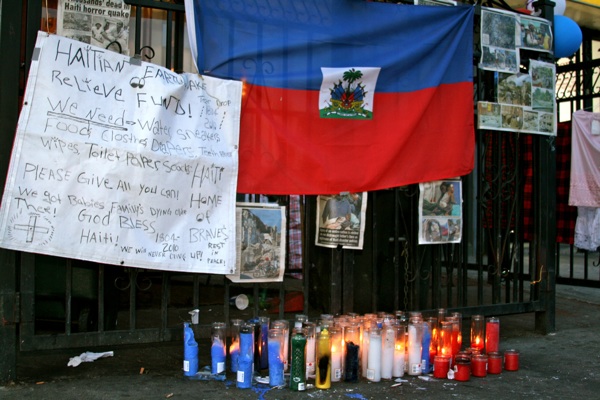 A sidewalk shrine set up in front of a Haitian restaurant in Flatbush, Brooklyn. Photo: Francisco Collazo

[Editor’s Note: Due to scheduled maintenance of the MatadorNetwork, we were unable to publish this update last night.]

Many readers have written to say how frustrated they are that they can’t be on the ground in Haiti, that it’s painful for them to sit at home, watching the rescue effort on TV, and “doing nothing.”

There’s something all of us can do, and there’s no need to feel powerless. Here are a few options, all of which are being spearheaded by Matador members or readers who responded to our initial call for volunteers. Read on… you’ll likely feel more clear about your own role in the recovery effort, and you’ll definitely be inspired.

1. Donation sites in New York City are being verified.

I spent today verifying the donation sites that are on the list provided by the Haitian Consulate. Only one of four sites visited is actively accepting donations, and that is Roland Realty, which is located at 907 Nostrand Avenue in Brooklyn. You can drop off donations of non-perishable food, clothing, and small household items at Roland.

Matador will be coordinating a sorting and packing day with American Airlines, The Society for the Advancement of People, and Roland Realty next week. More details to follow in future updates.

For anyone in the Miami area: We are taking donations of medical supplies, food, and blankets (clothing and building materials will be accepted later on as the warehouses are overwhelmed and the most items are going out first). The first shipment leaves Monday aboard the USS Comfort.

The drop off location is 7230 NW Miami Court in Little Haiti. Donations are being accepted on Sunday from 9am-3pm and Monday from 1pm-5pm.

Andrea Brown of central Florida reached out to Matador as a coordinator for local donation efforts in the Orlando area. Please follow her on Twitter (@aharbrown) for updates in that region.

3. Matador is sharing the information of medically qualified volunteers with Partners in Health.

Partners in Health has been working in Haiti for more than 20 years. We have been in touch with PiH since Wednesday and have agreed to share our list of volunteers with medical credentials with PiH.

More than 180 people who responded to Matador’s initial volunteer request, in addition to 70 Haitian American doctors who contacted Matador, will have their information made available to PiH. If you are among these people, please DO NOT contact PiH directly, as they are overwhelmed with calls. If they need your assistance, they will follow up with you directly.

Other volunteers without medical experience will remain on our volunteer list for a future trip to Haiti to assist in recovery efforts.

4. A Matador volunteer arrived in Port-au-Prince and reports he was able to get supplies to Bresma orphanage.

Vladimir Tilus was one of the first readers to respond to Matador’s call for volunteers. A former serviceman with experience serving in Port-au-Prince, Vladimir was determined to return to the city to assist in rescue efforts.

He reported that he arrived in Port-au-Prince last night. This afternoon, we asked Vladimir if he could try to deliver water and food to the children of the Bresma orphanage, as they had run out of water completely and food was running low. At 10:37 EST tonight, Vladimir wrote to say that he had reached the orphanage and was able to deliver both water and food. Though the kids are not out of danger yet, these critical supplies will help them hang on a bit longer.

We will continue to keep you posted with updates as new information is available.

Thank you for your continued support.