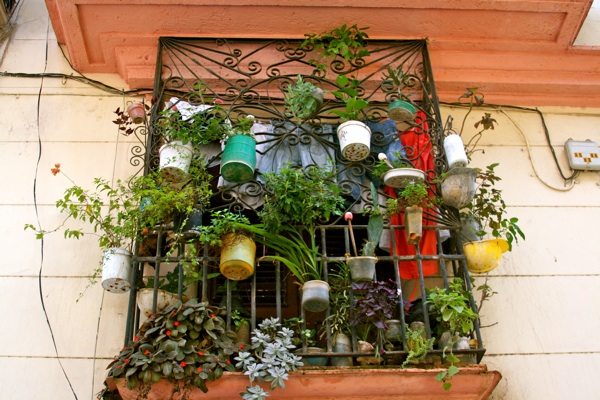 A construction helmet and other objects, repurposed as flower baskets. All photos by author.

Havana is a filthy city.

Each morning, when I step out the door and onto Infanta, there’s the triple assault on the senses: dog shit from dachsunds and mixed breeds; diesel fumes belched out in plumes from the tailpipes of Ladas and camellos, and piles of garbage sitting on street corners, baking in the sun as they wait to be picked up and carted off.

Within minutes, I feel dirty.

By day 7, I’m wondering what the long-term health hazards of living here might be.

For all of its grit, though, Havana offers the “developed” world some useful lessons in green living:

The guy who sells guarapo–the fresh-pressed juice from sugar cane–on Infanta doesn’t use to-go cups. You belly up to the bar, such as it is, plunk down your change, and take a long draught straight from a glass. When you’re done, you hand the glass back, it gets dipped in some water, and the guy behind you gets ready for his swig.

Whatever you’re drinking–guarapo, or coffee, or Tu Kola–you don’t need so much of it that it requires a special, disposable cup. And you definitely don’t need to be in such a hurry that you can’t stand around or sit down for a few minutes to finish whatever you’ve ordered.

My mother, in Cuba for the first time, leans over the deep freezer at Carlos III’s meat shop to inspect the chicken, some of which is packaged, some of which isn’t. No matter– the price stickers are pasted onto the non-packaged chicken, just as they are to the thighs, legs, and breasts bundled and twisted into clear plastic baggies.

In the US, frozen chicken free of packaging would likely be scooped out of the freezer and disposed of, the management citing health concerns. None of our fellow shoppers, however, seemed to be worried about the minimalist packaging.

3. Almost everything can be repurposed.

During my first Cuba trip, I watched my mother-in-law wash and reuse disposable grocery bags until the “nylons,” as she calls them, were worn out. I returned home with an obsession: everything could be repurposed. A rubber band, a plastic shopping bag, the newspaper: nothing should be wasted.

Though I’ve controlled the obsession (partly by becoming conscious of what I consume in the first place), each subsequent trip to Havana has made me realize just how much we could upcycle if we really wanted to try our hand at repurposing objects that have outlived their original use.

4. We don’t need nearly as many artificial lights as we think.

Part money-saving strategy, part resource-consciousness, Cuba’s capital is hypervigilant about energy use. Businesses that don’t need to turn on all their lights… don’t. Banks, restaurants, hotel lobbies, bookstores… no matter where you go in Havana, you’re not likely to witness any excessive use of artificial light. And really, I didn’t miss it.

5. Our bodies are an incredibly efficient source of energy.

Like the other lessons, this one’s painfully obvious–except for the fact that it isn’t in societies where folks are overly attached to cars and gadgets that promise to make their lives more convenient. 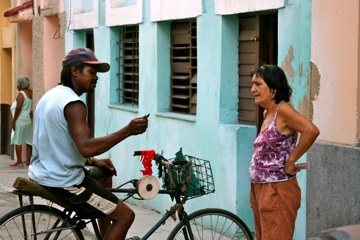 But check out the guy on the right. He’s repairing some nail clippers by pedaling a bike to which he’s attached a sharpener. What would happen if more people used the power of their bodies to do the work they need to do?

Many aspects of Havana’s “green” lifestyle were/are precipitated by sheer economic necessity- and by no means is my intention to romanticize poverty. Nor do I contend that the Cuban government consciously proposes or enforces any of these strategies as part of an ultra-environmental social consciousness, a la Curitiba, Brazil.

But economy and politics aside, seven days in Havana remind me of how easy it is to go green at the individual and societal levels. It’s worth a try.

Which of these strategies could you try? Any others you’ve seen in your travels that would be simple to implement? Share in the comments.

Tagged
Travel Havana, Cuba
What did you think of this story?
Meh
Good
Awesome

Major Lazer just rocked Cuba. You have to see this to believe

Raul Castro to Obama: Thanks, Barack. Now end the sanctions

A conversation with OMNI: The underground voice of Cuba

How to spend 16 hours in Havana, Cuba

What’s going on in this Cuban church?

How to budget travel in Cuba