14:06 Apr 22, 2020
View all travel news
Top Regions
Top CitiesView All Destinations
Trending Regions
Trending Cities
Load More
Landfill Harmonic tells the story of “Los Reciclados” — “The Recycled Orchestra” — a youth orchestra in Cateura, Paraguay, whose instruments are made out of the very trash that the town is built on.

WHEN FAVIO CHAVEZ AND LUIS SZARAN came to Cateura to start a music school, they realized that they had more students than instruments. Thanks to the resourcefulness of Cola, a Cateurian garbage picker, an orchestra came together, now featuring violins, cellos, and other instruments artfully put together from trash. Los Reciclados de Cateura, now an independent orchestra, recently performed in Brazil and Colombia under Chavez’s direction.

I spoke, over email, with Founder and Executive Producer, Alejandra Nash, and Producer, Juliana Penaranda-Loftus, about their experiences in Cateura, the making of the film, and their hopes for the documentary.

Nina: How did this project come about? Did you visit Cateura and find the Landfill Orchestra, or did you know about them from the get-go?

Alejandra Nash: I was born in Asuncion, Paraguay. I dreamed of the opportunity to help my country in a creative way; a way of bringing awareness to issues that revolve around children and women in Paraguay, so the idea of a documentary became the first seed. I contacted Juliana, who I met through a friend, and knowing she is a producer we started our research. During that phase, I met with Luis Szaran, the director of a non profit organization that brings music schools to the poorest areas in Paraguay. Los Reciclados story instantly took my breath away. Since then we have gone to Cateura, Paraguay several times filming the children and Cola, who all live there. Cola is the luthier, the sweet and humble garbage picker who makes those wonderful instruments for the children. Favio Chavez is the director and heart of the orchestra. His love and commitment to these children is fascinating.

Juliana Penaranda-Loftus: We heard a story about an orchestra that was put together using recycled garbage in April of 2009, it was during our first research trip to Paraguay. In the summer 2010, Alejandra and I came back with director of photography and friend Tim Fabrizio. We arrived to do some initial filming in order to produce a trailer. During that trip, we met the first group of children who were part of the recycled Orchestra, those children are now playing with professional Orchestras. We have been following this story since then. We went back in 2011 and have gone twice in 2012. Now there is a new group of children that have joined the orchestra. We have witnessed the commitment that Favio Chavez (orchestra director) has towards these children of Cateura, their families and their community. There is a whole social process that happens behind running the orchestra. We have developed very strong ties with them during these years and this is a story that goes way beyond the screen.

The trailer looks great. Could you talk a bit about the structure of the film? Who did you follow? What are some of the stories you’re trying to tell?

AN: Thank you. We are following three of the children in the orchestra: Tania, Maria, and Ada. As well as Cola and Favio (director of the Orchestra).

JPL: Our story follows a music teacher (Favio) and his students as they pursue their dream of building their recycled orchestra. The story explores the town where the children are from, Cateura, a slum built
on the top of a landfill. The film also follows a local garbage picker, the instrument maker.

We are still under production so the story is still evolving and taking unexpected paths for our characters.

The entire crew has really impressive bios and histories of past projects. How did you all come together to work on this project? 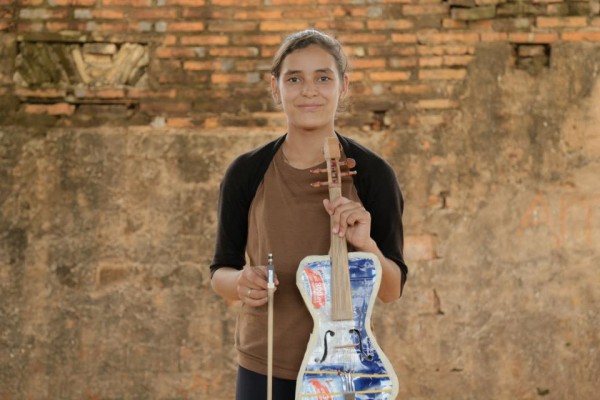 AN: Juliana, through her contacts, was able to get the crew together. I am extremely happy about having such a wonderful group of people involved in this project. It came through as a result of everyone having the same reaction as I did when I first knew of this story: we fell in love with it.

JPL: We are working with wonderful professionals who really love and believe in the story as much as Alejandra and I do: Rodolfo Madero (Executive Producer), Jorge Maldonado (Co-producer), Graham
Townsley (Director) Jennifer Redfearn (Consulting producer), Tim Fabrizio and Neil Barrett (Directors of Photography) and Monica Barrios (Production Consultant).

Is there a nonprofit backing the funding for this?

AN: We get donations through our fiscal sponsor Creative Visions Foundation. Creative Visions is a non profit organization that supports projects that utilize media and the arts to create positive change in the world.

JPL: The production has funded the project so far. But we are in the process of approaching sponsors to secure additional funding which will allow us to complete the film. We still have a lot to film as the story is taking the orchestra members to unexpected places.

Do you have an estimate of when you expect the film to be finished?

JPL: We are still under production and expect to complete the film in 2013.

Cateura is built on a landfill. Where does all that garbage come from? Is it all from Paraguay? How did the city come to be built there?

AN: All the solid waste stream from Asuncion (the capital) and the metropolitan area goes to the Landfill in the outskirts of Cateura. People in the actual town of Cateura don’t have any dedicated place where they can throw their waste.

JPL: There used to be a big lagoon in the Cateura area. Over time, the lagoon was filled with garbage, debris and other materials that come from the city. Displaced people that were so poor they had no other
place to go started occupying and building the homes over the top of the waste. That’s why we can say that Cateura is literary build on the top of a former landfill.

Can you tell me a little about the conditions in Cateura, from your personal experiences?

AN: The hygiene and environmental issues are a real problem. Even thought they live by the landfill, the infrastructure of the place is so under-developed that they do not even have a garbage pickup or
any kind of trash system in place. So people throw their garbage around, some burn them, creating a polluted area filled with trash everywhere. Their water creek is completely polluted. We hope to bring some awareness on these issues as well, and assist in creating opportunities to support a plan that will tackle this issue.

What was working with the kids in Cateura like? Did they have any prior experience with film crews / American journalists? 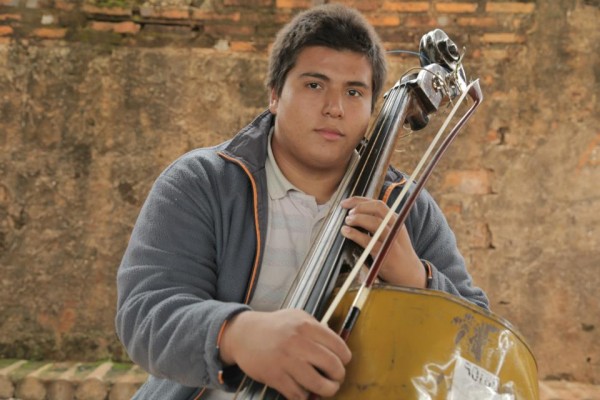 AN: Working with the kids has been wonderful. They had no prior experience with international film crews and were very shy at first. They are very interested in learning about United States and curious
about it. It still takes them a little bit to warm up to us when we first arrive. But then they are happy and open, we have created a very good relationship with them throughout the years we have been following them even before we started filming. Juliana is from Colombia and I am from Paraguay so speaking their language is a big plus. The director, Graham Townsley, speaks perfect Spanish as well.

What do you hope the effect of this documentary will be?

AN: My hope is to inspire, educate, and motivate, as well as bring attention to the sanitary conditions in Cateura. Through this film I hope people will be motivated to be creative and resourceful. We also have plans for outreach programs to bring Los Reciclados to United States and get them exposed to musical and educational environments and opportunities.

JPL: Our job as filmmakers is to share this remarkable story of creativity, hope and endurance with the world. This story will inspire people of all levels and ages to look at an adverse situation in a creative way.

We also hope to bring awareness to major global themes of our time — poverty and garbage management.

Tagged
Travel Paraguay
What did you think of this story?
Meh
Good
Awesome

8 reasons we should all pay more attention to this place

14 images of the real Paraguay

How I learned Guaraní in Paraguay

The best Airbnbs in Banff for a magical winter ski trip

The worst travel photo cliches and how to avoid them

Why The Ranch at Rock Creek, one of America’s priciest hotels, is more affordable than you think