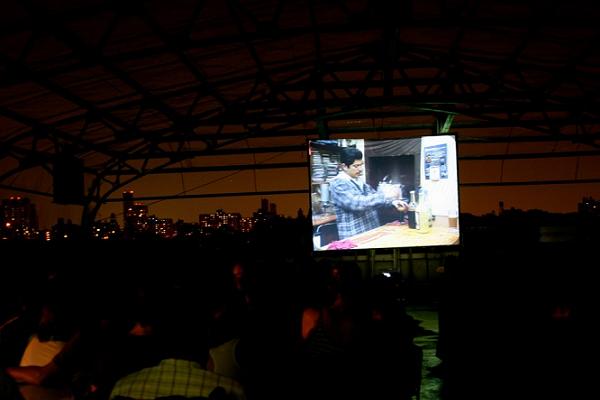 In this first article in an occasional series, “Steal This Idea!”, Matador Change editor Julie Schwietert highlights one urban initiative that could be adapted for your own city.

THE IDEA BEHIND this new series is to show off cool projects from around the world that can be adapted and implemented in your own city. We kick off the series in New York City.

Rooftop Films partners with 15 venues–from museums and high schools to old factories–to show “underground movies outdoors” during the summer months. For just $9.00 USD, New Yorkers can enjoy films from around the world each weekend–as well as a view of the city most people never see. Most of the films are shown on the venues’ rooftops– hence the name Rooftop Films.

The films selected for each event are organized around a theme that’s customized to appeal to the neighborhood where the venue is located. And each screening is preceded by live music and followed by a filmmaker Q&A and/or after-party (with free drinks!).

But Rooftop Films is a lot more than a summer festival that brings together people to enjoy films they’d be unlikely to see elsewhere.

Rooftop has been showing films in New York City since 1997 under the direction of filmmaker Mark Elijah Rosenberg. From Rooftop’s website:

“[Rosenberg] was looking for an innovative way to get people together for screenings of new short films. … [I]nstead of trying to rent a small dingy theater, Rosenberg got out his 16MM projector, a cheap sound system and a big white sheet and invited everyone he could find up to the roof above his little apartment. Hundreds came out, many with their films in tow, and the movies were screened deep into the night amidst the water towers and pigeon coops of the East Village skyline.”

When his landlord got wind of the rooftop film fest, Rosenberg had to scout for alternative locations, which wasn’t a bad thing. Rooftop’s gone from a gathering of friends and artists to a city-wide event that’s open to the whole film-loving public.

Sure, Rooftop has fancy projectors and screens now, but it got its humble start with a bed sheet tied up between two poles. You can do the same. Scout your local thrift store for a projector or see if a local non-profit wants to partner up with you– they loan you a projector; you give them some exposure.

And you don’t need a roof– a little patch of lawn will do just fine.

For more information about Rooftop Films, visit the organization’s website.

Love movies? Check out our guide to the world’s best film festivals.