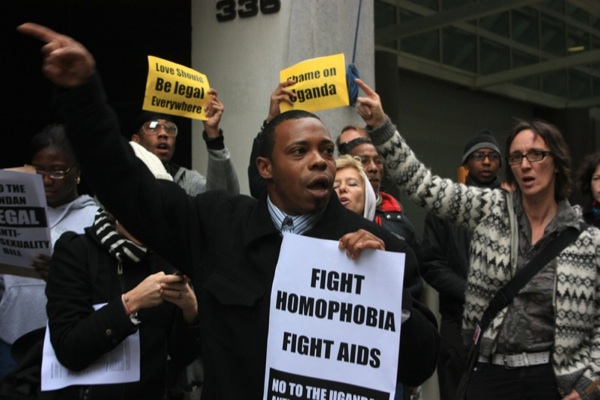 Gays all over the world continue to struggle for human rights. But in Uganda, that fight is poised to become a life or death issue.

Uganda’s Minister of Ethics and Integrity seems to be a very busy man.

In late 2008, Minister James Nsaba Buturo announced that the government was going to step up its efforts to manage “quality of life crimes” that threatened the integrity and well-being of all Ugandans.

Women known or thought to be prostitutes would have their names published in newspapers or on the Internet, and broadcast on television news. (Convenient, as Buturo is also the Minister of Information and Broadcasting).

“can cause an accident when you are… in a car. Men while driving gaze out when they see these women and this causes accidents.”

But the bee that’s really been buzzing in Buturo’s bonnet is homosexuality, and the Anti-Homosexuality Bill of 2009 was intended to quash this “emerging…threat to the traditional heterosexual family” by making homosexuality punishable by death.

Under the law, homosexuality would be defined broadly, including not just sexual acts or identity, but also activities the government considers to be supportive of homosexuality, such as the distribution of literature or other “pornographic material.”

Buturo and the government supported the imposition of a death penalty for gays until the United Nations and other world governments expressed their outrage and their intent to withhold aid and other support. This week, the government announced it would dial down the punishment. Instead of death, gays are eligible to be imprisoned for life.

All of this is troubling enough, but what’s more disturbing to me is the fact that three Americans appear to have played a significant role in helping the Ugandan government craft the Anti-Homosexuality Bill. The men–one a “reformed” gay man who leads “healing” workshops and the other two, missionaries–gave talks to thousands of Ugandans at a three day conference last year; they were presented as American experts on homosexuality.

According to Jeffrey Gettleman of the New York Times, “police officers, teachers and national politicians” were in the audience, and the effect of the conference was the setting in motion of “what could be a very dangerous cycle.”

Reverend Kapya Kaoma, a minister from Zambia who was interviewed by Gettleman, observed, “What these people [the missionaries] have done is set the fire they can’t quench.” Gettleman cited Kaoma as adding, “the three Americans ‘underestimated the homophobia in Uganda’ and ‘what it means to Africans when you speak about a certain group trying to destroy their children and their families.'”

Though the missionaries claim to have been horrified that their conference led to the crafting of such an aggressive bill– one is even quoted as saying something to the effect of “Some of the best people I’ve met are gay.”–their eagerness to present to a group of people about whom they obviously knew little, if anything, is problematic because they weren’t even able to imagine the potential consequences.

If you’re concerned about this issue and would like to keep track of events and make your own opinion heard, here are a few steps you can take:

1. Subscribe to the blog Gay Uganda, a personal blog maintained by a gay Ugandan. The first person perspective of this blog is paired with up to date information about developments regarding the bill.

Wondering how homosexuality is treated in other parts of the world? Read about India’s decriminalization of homosexuality.

Tagged
Travel Uganda
What did you think of this story?
Meh
Good
Awesome

Ugandan gorillas are experiencing a baby boom this year

On my way to work: Gulu, Uganda

The struggle to return home

In search of black identity in Uganda

The Uganda you don’t see in the news

A beginner’s guide to driving in Uganda

Why everyone needs to eat a rolex in Uganda