I FIGURED SOMETHING OUT,” I told a group of policemen standing next to me in their ninja-turtlesque riot gear on the corner of San Antonio and the Alameda in downtown Santiago. “If I stand by you guys, I don’t get hit by water.”

“No,” responded one of the police officers, “you just get hit by rocks.”

And it’s true. We’re two months into periodic protests and a paro, or stoppage by university students here in Santiago, Chile and tempers are bow-tight. I wanted to go today and write about the creative posters and signs and puppets and dance in the protest, the energy and the positivity, as I had before. But the request to march down the Alameda was denied by the city, and today’s scheduled 10:30 AM march (scheduled by the high-schoolers) never convened. I talked to a friend at around 10 this morning, and he said, “the cops are sweeping people out of Plaza Italia” (the traditional meeting place for protests and celebrations)

In essence, under the first right government in Chile since democracy was restored, the students are seeking a return to how education was administered under the last (socialist) government before the 1973 military coup.

The students, both university and high schoolers have been on strike for quite a while, with the first protests and stoppages dating back to April. The official start of the paro general (across-the-board stoppage) was June 1st, and since then, a series of protests have taken place, all seeking the same educational reform which seeks better access to education for all Chileans, regardless of their financial situation, and to make it so that universities are not for-profit, money-earning institutions.

In essence, under the first right government in Chile since democracy was restored, the students are seeking a return to how education was administered under the last (socialist) government before the 1973 military coup.

Though negotiations continue between the government and the students, no real advances have been made, and the surprise change of several members of President Piñera’s cabinet on July 18th hasn’t helped for them to find a common ground.

Students continue to demonstrate in a variety of ways on a daily basis, including a now 18-day-old hunger strike and a continuous run around parts of downtown, which will total 1800 hours in all by the time it is over. Today’s morning protests were convened by the high schoolers, but since the protest was not granted permission, the police were out in full force starting at about 7 AM, taking down barricades that had been set up at key points around the city. 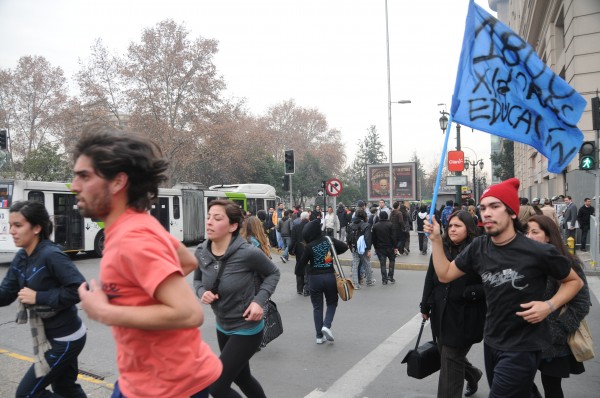 From the intended start of today’s protest (at 10:30 AM), I was out covering it, armed with a scarf for my mouth and nose, clear plastic glasses and a halved lemon. These items diminish the effects of drifting tear gas, though nothing will help you if you get hit full on in the face, which I know from experience.

The water cannons are another concern, as they are used to disperse and intimidate protesters, and the water contains chemicals as well, leaving a white residue on the street when it dries. The final concern is the rocks, as the police officers had mentioned, thrown by violent hangers-on to the student movement itself. 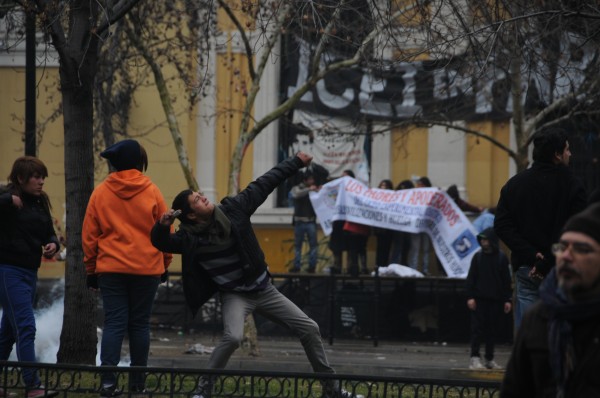 Protester throws a rock in front of U. de Chile.

And everywhere I went, the police were turning people back. I saw them ask Ismael, a 20-something kid with a crewcut and a few dreadlocks as a tail, for his national ID card, and they started writing down his information, and later, looked through the contents of his bag.

“Because I was filming.” He showed me some footage on his hand-held video camera of a young man being taken away by the police.

I’m taking pictures, too,” I said. “Maybe because I’m young, they think I’m a student,” he said. “I just like to film stuff,” he shrugged, walking south on the street Portugal, away from the police. 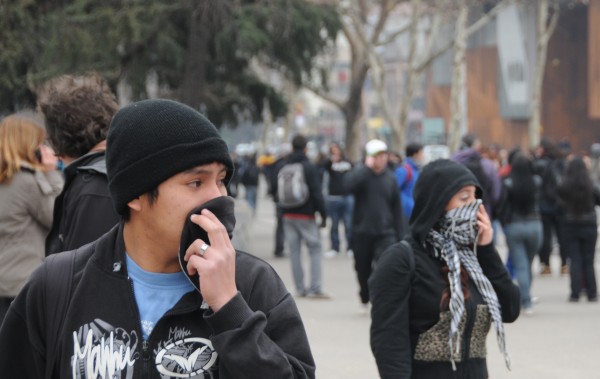 People cover their faces to protect against tear gas in Santiago.

A young woman with face paint and her boyfriend were turned back from another checkpoint. “Why didn’t they let you through?” I asked.

“Because we’re living in a dictatorship,” she said. “And because I have my face painted, and look young,” she added. “Nos discriminan,” (They discriminate against us.) She’d saluted the police officer before walking away, a false show of respect and a possible accusation of him of being in collusion with the military. 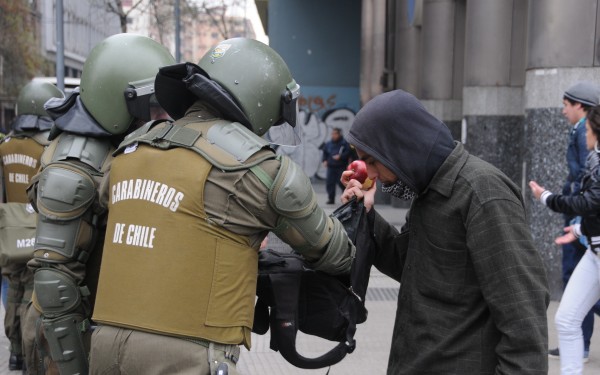 Police inspect a young man's backpack during the protest.

So it appeared. All along the Alameda, the police were turning students (or perceived students) back. While I, a gringa on her bike with a big camera, and business people and others circulated freely, the police would come up to young people, and point them the other way, directing them away from flareups, like at the Universidad Católica where I first stopped, and further down, at the Universidad de Chile, closer to where I live.

On the corner of San Antonio, where I’d joked to the policeman about staying dry under their watch, the group of them stopped no fewer than ten groups of kids in 15 minutes, to shunt them away from the Universidad de Chile and look inside their bags. And in between, the zorillo (vehicle that shoots tear gas) and the guanacos (water cannons) drove up and down the streets, hosing groups of kids down, and gassing them out of where they were standing.

And the guanacos were splattered with paint (people throw paint bombs at them), as were the shin guards and billy club of one of the policemen I saw. And people were throwing rocks, and even fruit crates from the fresh market at the police vehicles, and at the police themselves.

A man stopped as I was talking to Paola, a naturalist who’s watching the third consecutive generation of her family grow up without the possibility of a college education for financial reasons. The man asked if she had anything to help with his burning eyes, and she handed him half a lemon. I had just swept mine across my eyes, which hurt, but less than the tear gas that was making my eyes burn.

I came inside just a couple of hours after I’d left. There were no large groups of people, and while I heard a couple of kids singing slogans, the aggressive police presence just seemed to make everyone angry and upset. Felipe, a musician friend of mine who I ran into near Universidad Católica said, “as the police become more extreme in their actions towards the students, even the ones who weren’t violent before, become violent. They defend themselves.”

There’s a second (also un-permitted) protest scheduled for later this afternoon, organized by the university students. As of 2:30 PM, local news is reporting 133 people taken into custody for violence, or possession of weapons or explosives.