Each year, as the leaves turn from gold to brown in preparation for the long winter ahead, one of the nation’s most popular destinations becomes a ghost town. A tourist-packed park is overtaken by peace and tranquility. But just because the temperatures have dropped and the crowds have headed south doesn’t mean there’s nothing to do. In fact, some may argue that the park is most beautiful covered in a blanket of fresh snow.

During the winter season, which typically lasts from late October through mid-May, daily high temperatures can range from around freezing to the low fifties. In January and February, evening temperatures often dip into the teens. Before planning a winter trip to the park, make sure to check the National Park Service website, as many summer amenities are closed. Don’t worry though — there is still plenty to enjoy in Acadia during winter. 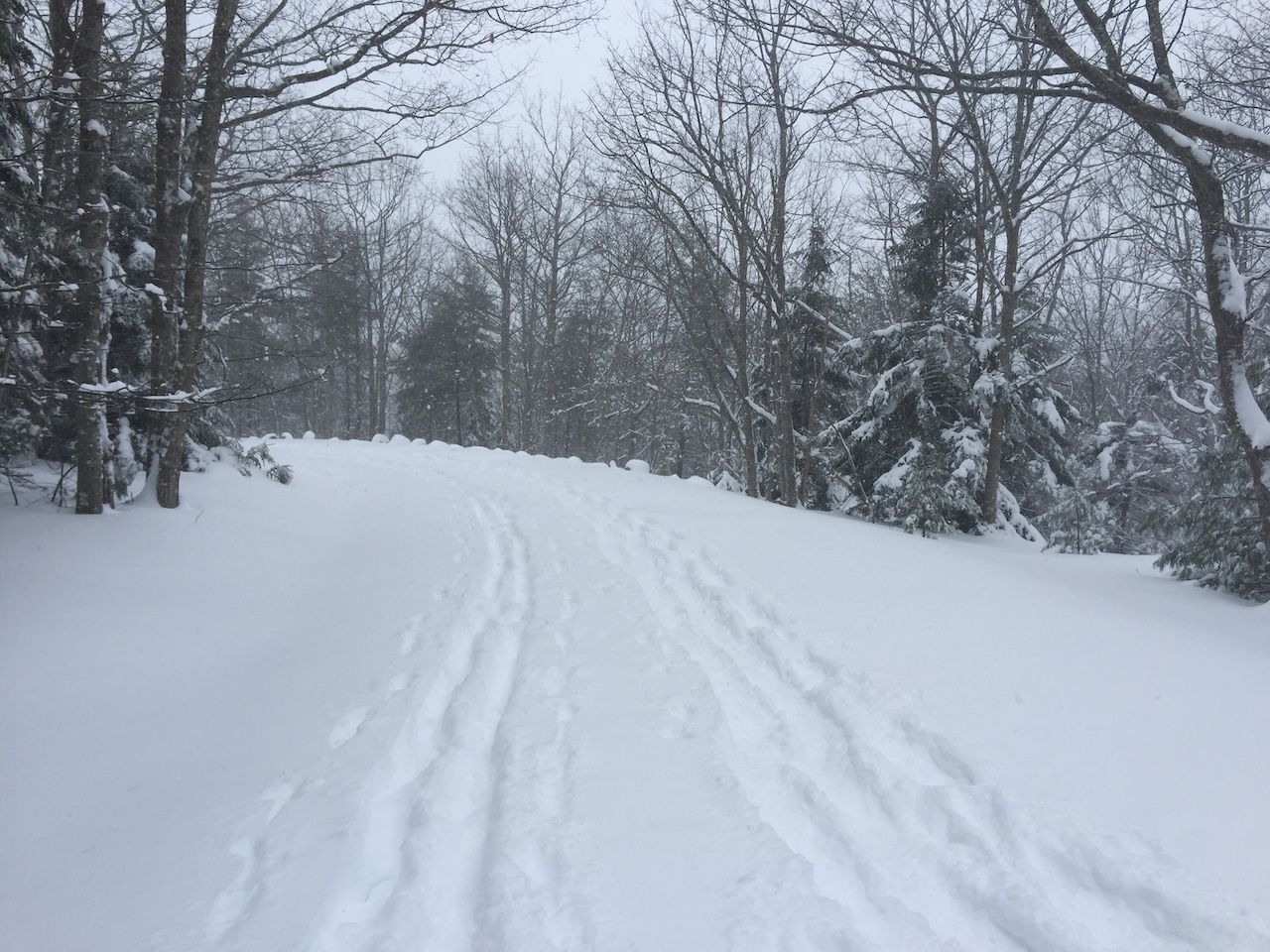 Snowshoe and cross-country ski on the carriage roads — When conditions allow, 32 miles of Acadia’s historic carriage roads are groomed for cross-country skiing and snowshoeing. Visitors silently glide and float along the park’s quiet, snow-covered roads, observing wildlife and landscapes that were filled with people just months earlier. Sections of the Park Loop Road are closed to vehicular traffic and open only to human-powered forms of recreation, although snowmobiles are also permitted. Cadillac Mountain Sports, located in Bar Harbor, offers snowshoe and cross-country ski rentals.

Go ice climbing — In the winter, many of Acadia’s dramatic cliffs and rock outcroppings are covered in ice that’s begging to be climbed by the adventurous. And if you time it properly, it’s even possible to climb frozen sea spray, which accumulates on the Otter Cliffs that tower above the Atlantic Ocean’s crashing waves. Acadia Mountain Guides offers ice climbing excursions and introductory courses in the park, from beginner low-angle snow and ice climbing to more advanced techniques on steeper ice. 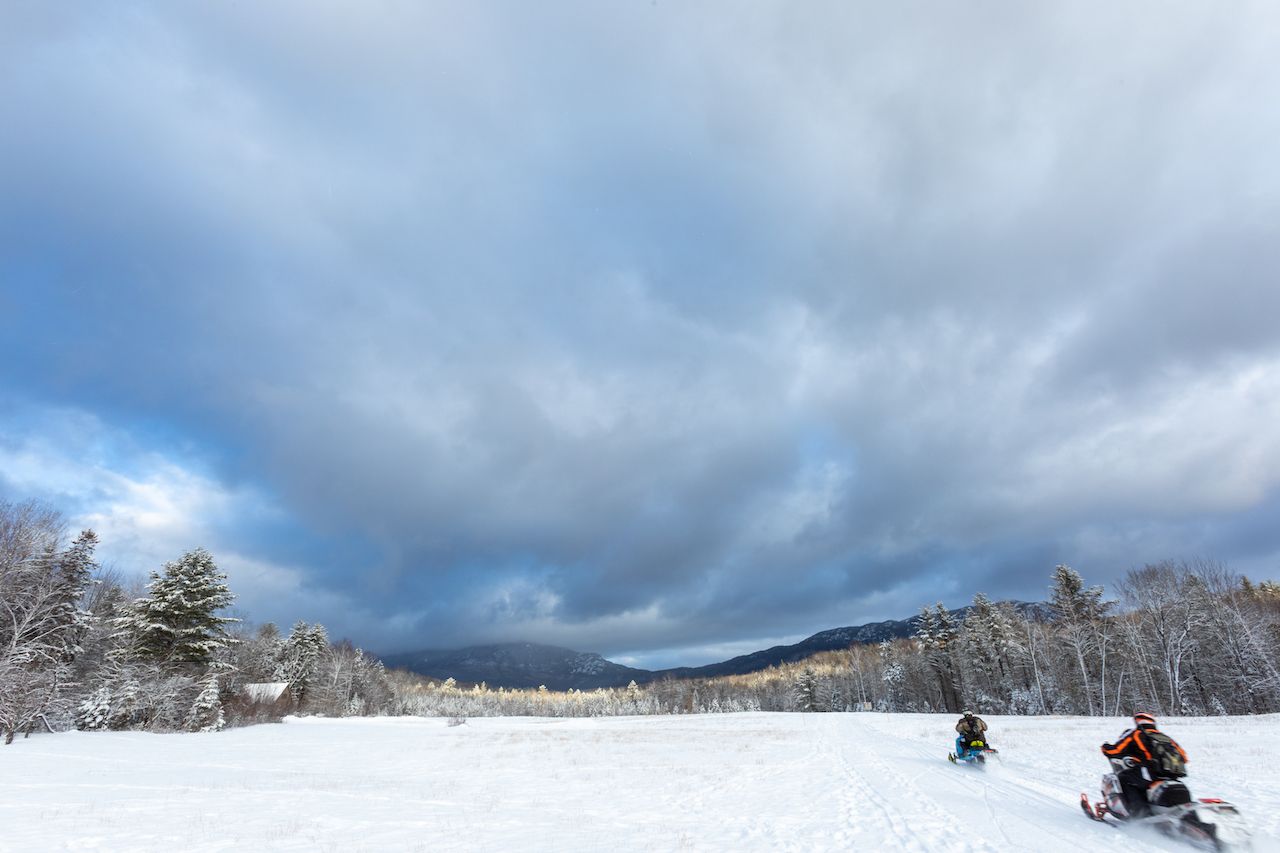 Ride a snowmobile — Snowmobiling is at the heart of Downeast Maine’s winter culture. At almost any gas station throughout the state, you can find a group of snowmobilers stopping to warm up during a day out in the woods. And unlike many other national parks, Acadia is no exception. Twenty-seven miles of Park Loop Road, many fire roads, and the road to the summit of Cadillac Mountain are open to snowmobiling. Unfortunately, no snowmobile rentals are available on the island, so visitors must either trailer their own into the park or rent from an outfitter outside of the island. 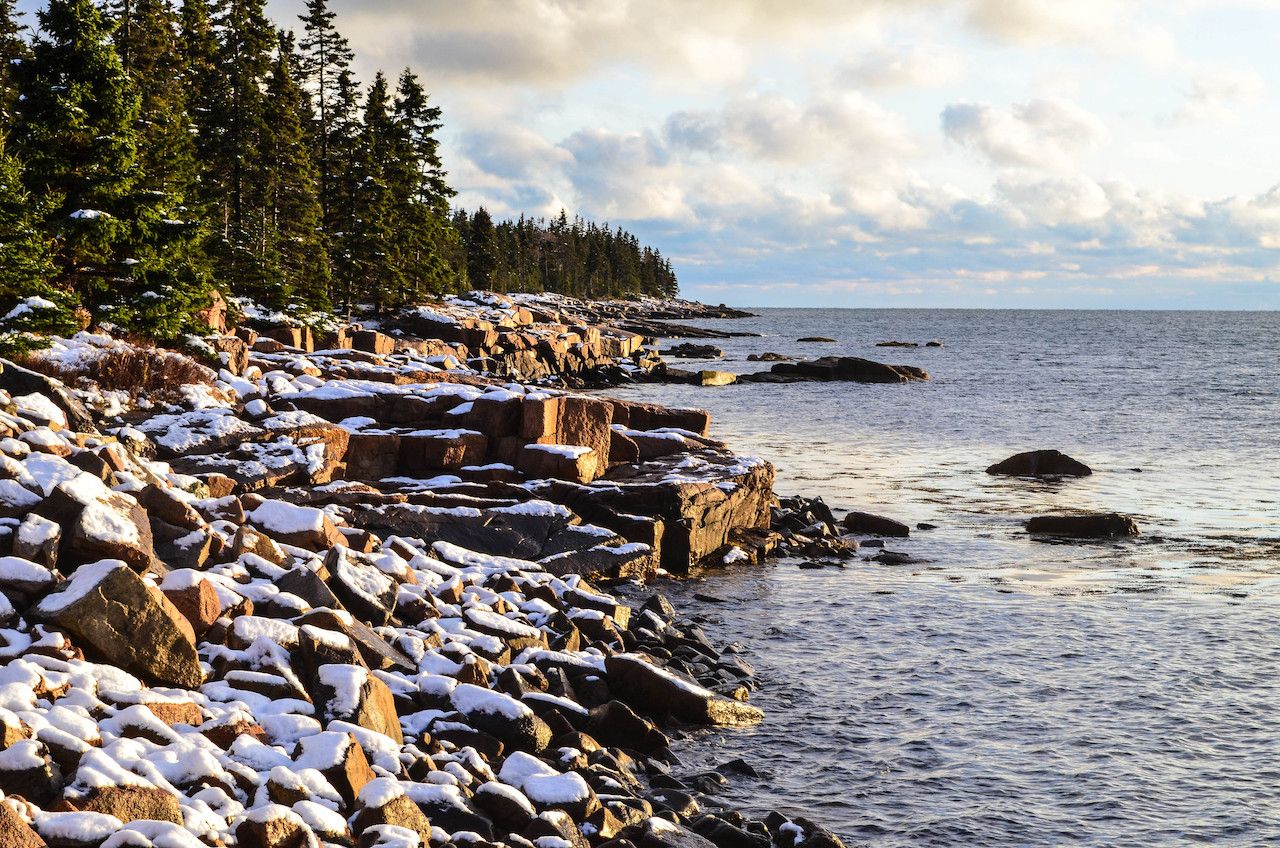 Go hiking — Hiking during the winter months can be the most rewarding way to experience Acadia. Winter is an opportunity to walk along some of the most popular trails, many of which are near impossible to have to yourself during the summer, in complete solitude. The sound of shuffling feet is likely to be the most audible noise once your car engine is switched off.

The 1,058-foot summit of Champlain Mountain can be reached by hiking the Beachcroft Trail, accessible from Sieur de Monts off of Route 3 during the winter. The summit boasts spectacular views of the surrounding bays and the Atlantic Ocean. Roundtrip is 1.8 miles.

While winter hiking can be extremely rewarding and enjoyable, it’s a serious undertaking, and you must have the appropriate gear and knowledge before tackling a winter summit. Among the most challenging winter hikes in the park is Pemetic Mountain, accessible from the Jordan Pond parking lot. From the trailhead, the hike is 3.1 miles roundtrip and often covered in snow but rewards with wide-open views of the ocean from atop a mound of flatbed rocks. 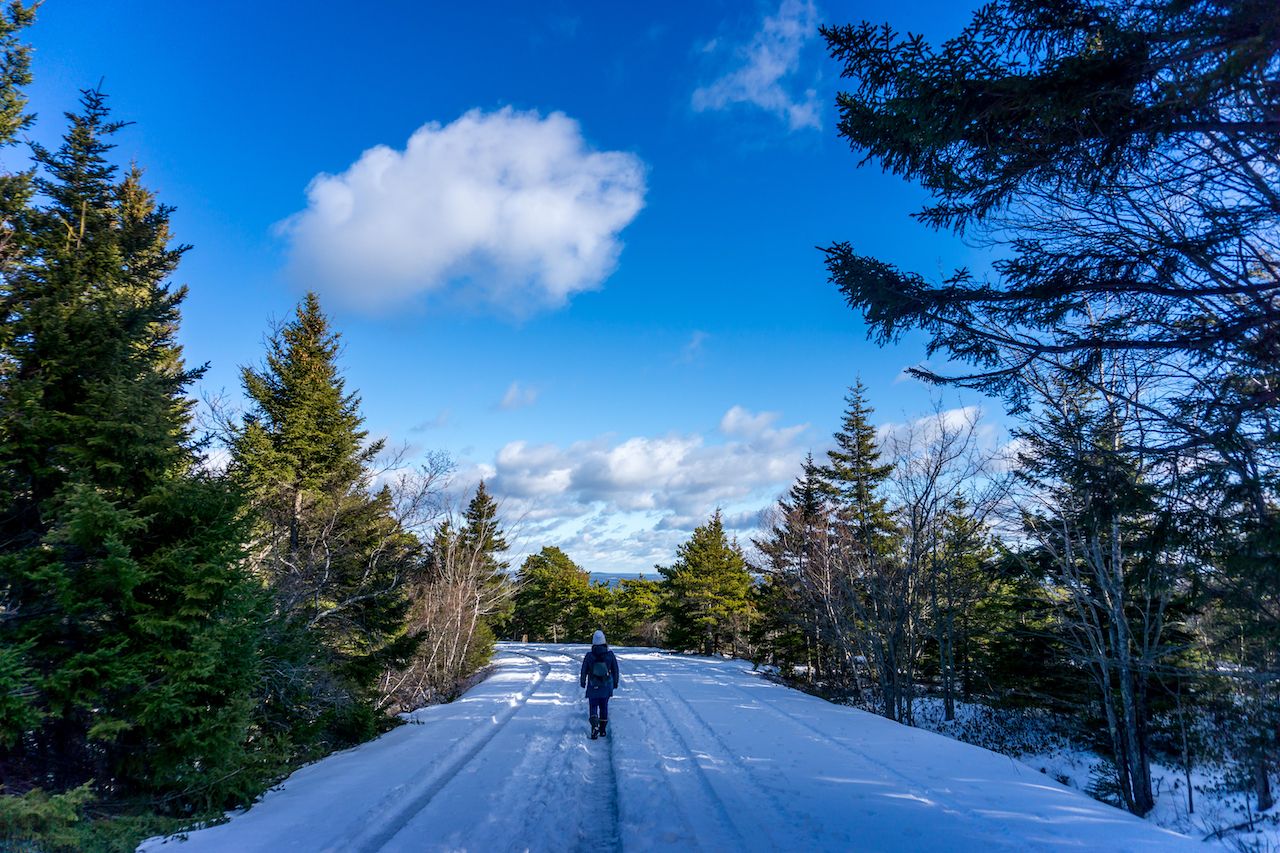 See the first light of day in the US — Cadillac Mountain — the highest point on the North Atlantic seaboard — is another great option for winter hiking. In fact, between October 7 and March 6 annually, the summit is the first place in the United States to see the sunrise. One of the best ways to hike Cadillac during the winter is via the Kebo Brook and North Ridge Trails. Just keep in mind the important caveats about winter hiking noted above. 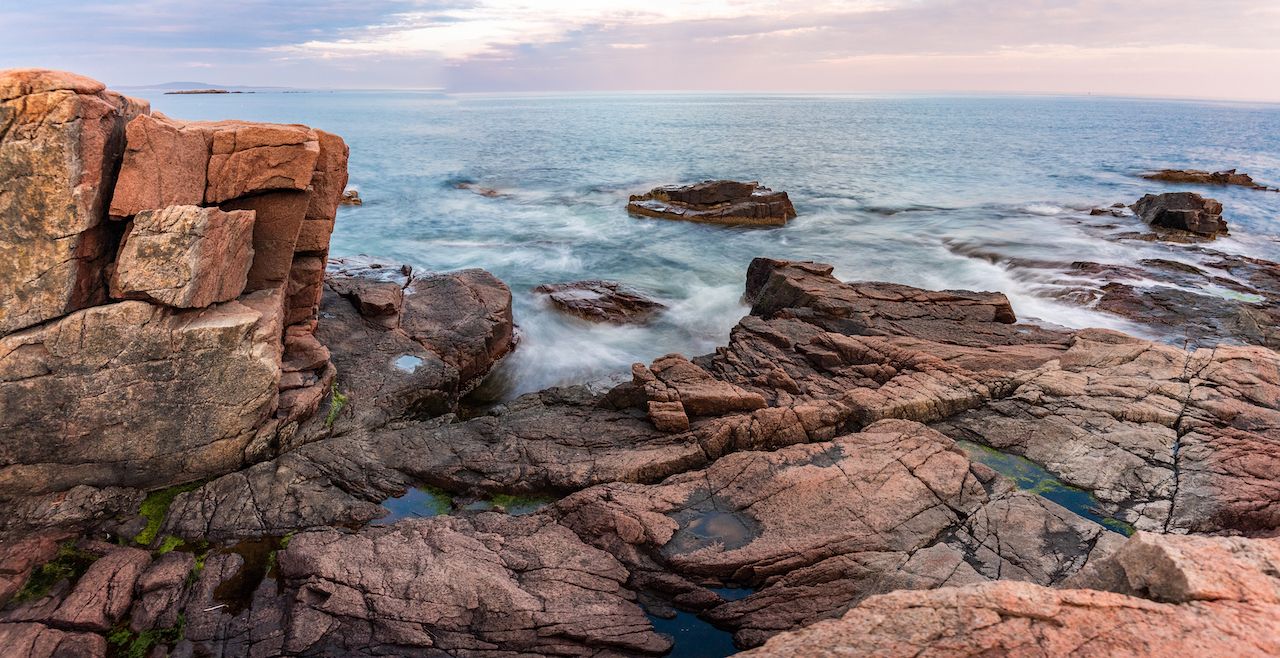 See popular attractions, alone — Not everyone can say they watched and listened to water spewing from Thunder Hole or strolled across Sand Beach with no one else around. Nor can they say they did so with a hint of frost piercing the air. Winter is the best time to visit the park’s most visited sights, like Jordan Pond, Sand Beach, and Thunder Hole, because these accessible attractions are some of the park’s busiest in summer months. You can follow Jordan Pond Road and Ocean Drive, the only parts of Park Loop Road typically left open year-round. Be sure to travel in a vehicle equipped for winter; seasonally appropriate tires are a must, and four-wheel-drive is recommended.