Toronto is a massive city, but that doesn’t mean it doesn’t have green space. Although the city suffers through a chilly winter, when spring comes around there is plenty to do that takes advantage of the city’s nature. Toronto has a plethora of parks, most of which are lively with locals, dogs, and small festivals. In the summer months, various parks host free evening movie screenings. To access large-scale nature, you have to venture to the outskirts of Toronto — but, thanks to well-connected transit, the trip isn’t too cumbersome. 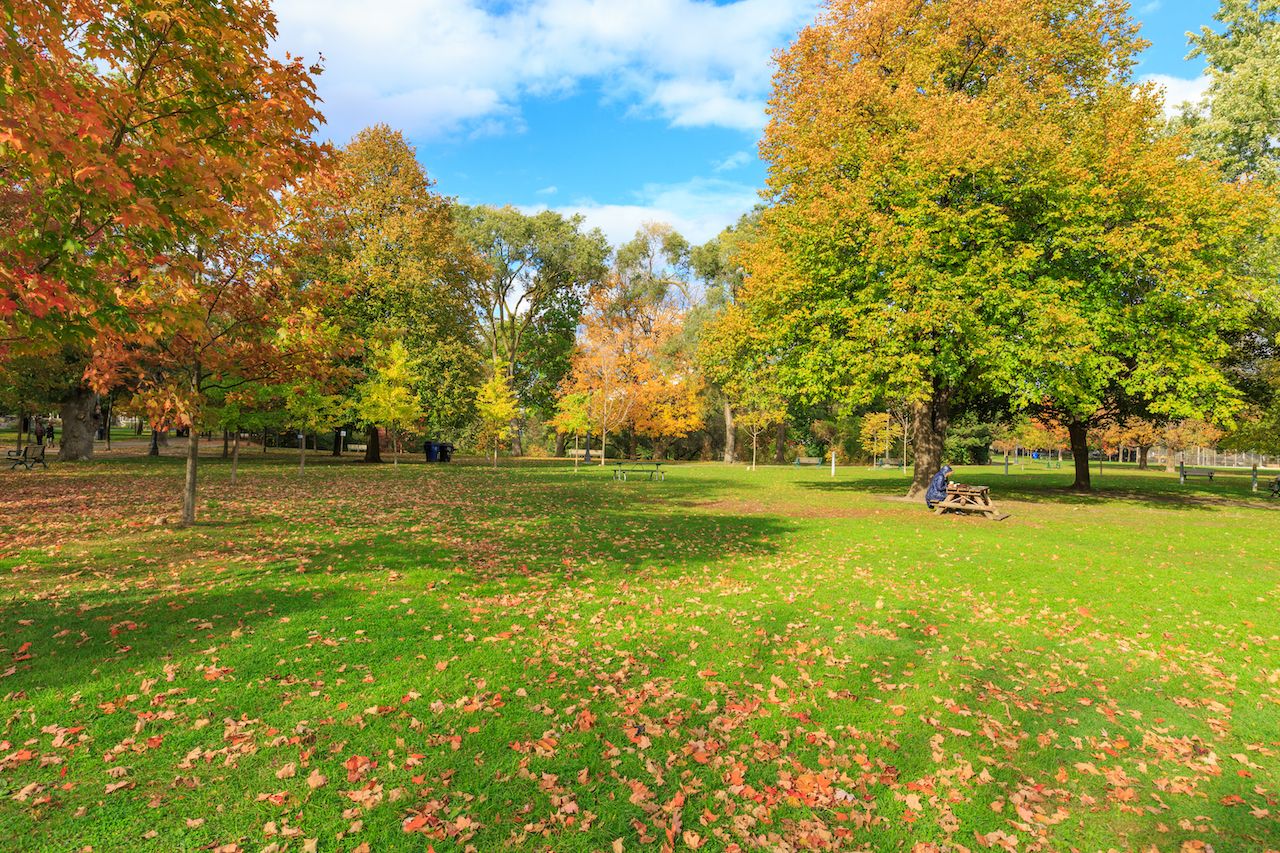 Trinity Bellwoods — According to Treepedia, an MIT project that measures green canopies in locations around the world, Toronto is one of the world’s greenest cities, and this west end park is a favorite among locals. Highly central and accessible, this large green space has a dog area, community center, farmers market, and various outdoor sports arenas. On summer weekends, the verdant area is always packed with picnics, slackliners, and cyclists. Trinity Bellwoods is known for its vibrancy and community, and with restaurants and breweries directly adjacent, it’s the perfect spot to spend an afternoon. 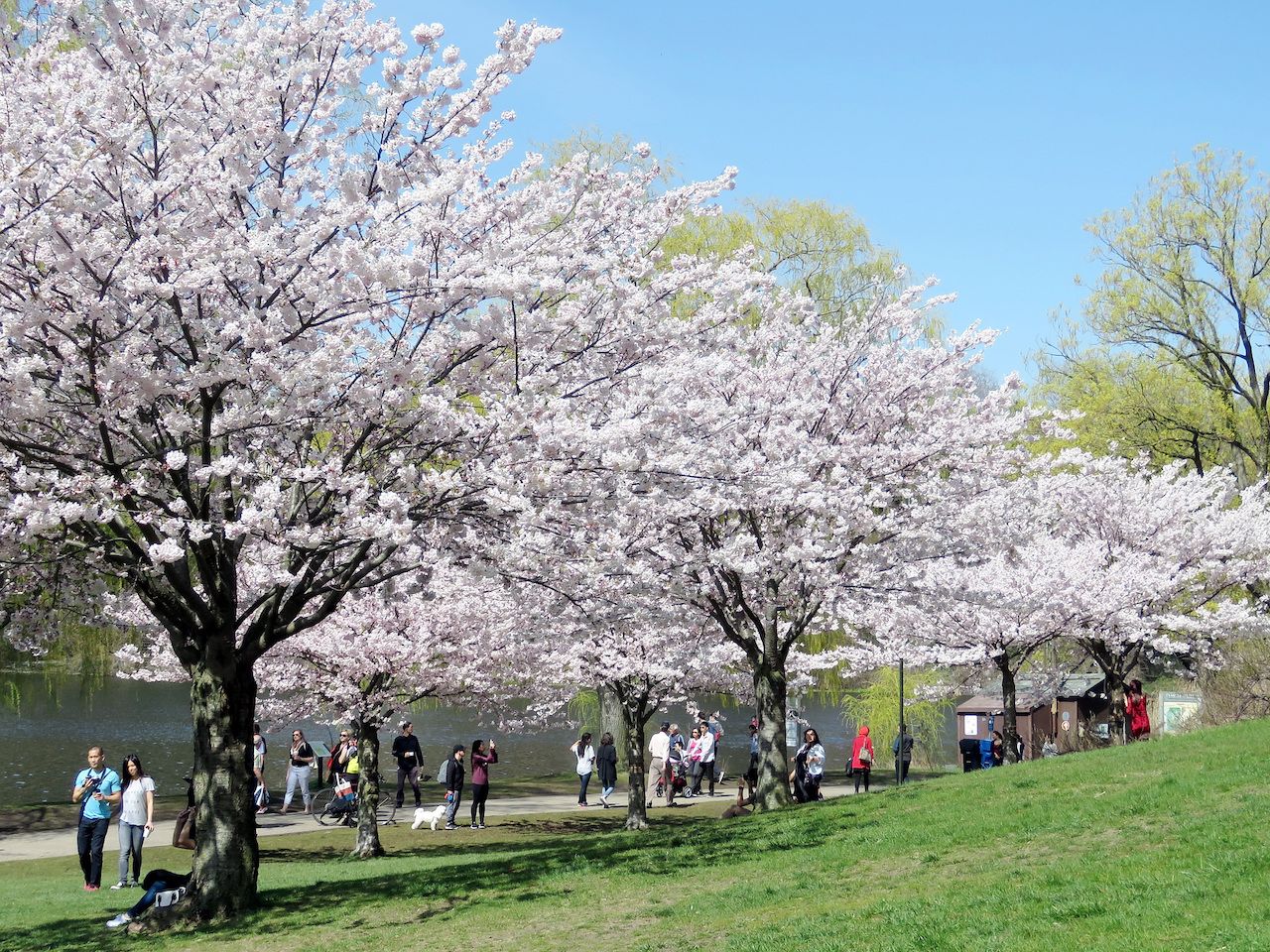 High Park — Located further west, High Park is Toronto’s largest green space. It spans over 161 hectares, one-third of which remains natural forest. You can explore that forest on one of the many hiking trails, or enjoy a waterfront stroll along Grenadier Pond. The park also has an off-leash dog park, a really cool wooden playground, and even a zoo. Springtime is a particularly beautiful time to visit, when you’ll be able to catch sight of the park’s cherry blossoms in bloom. 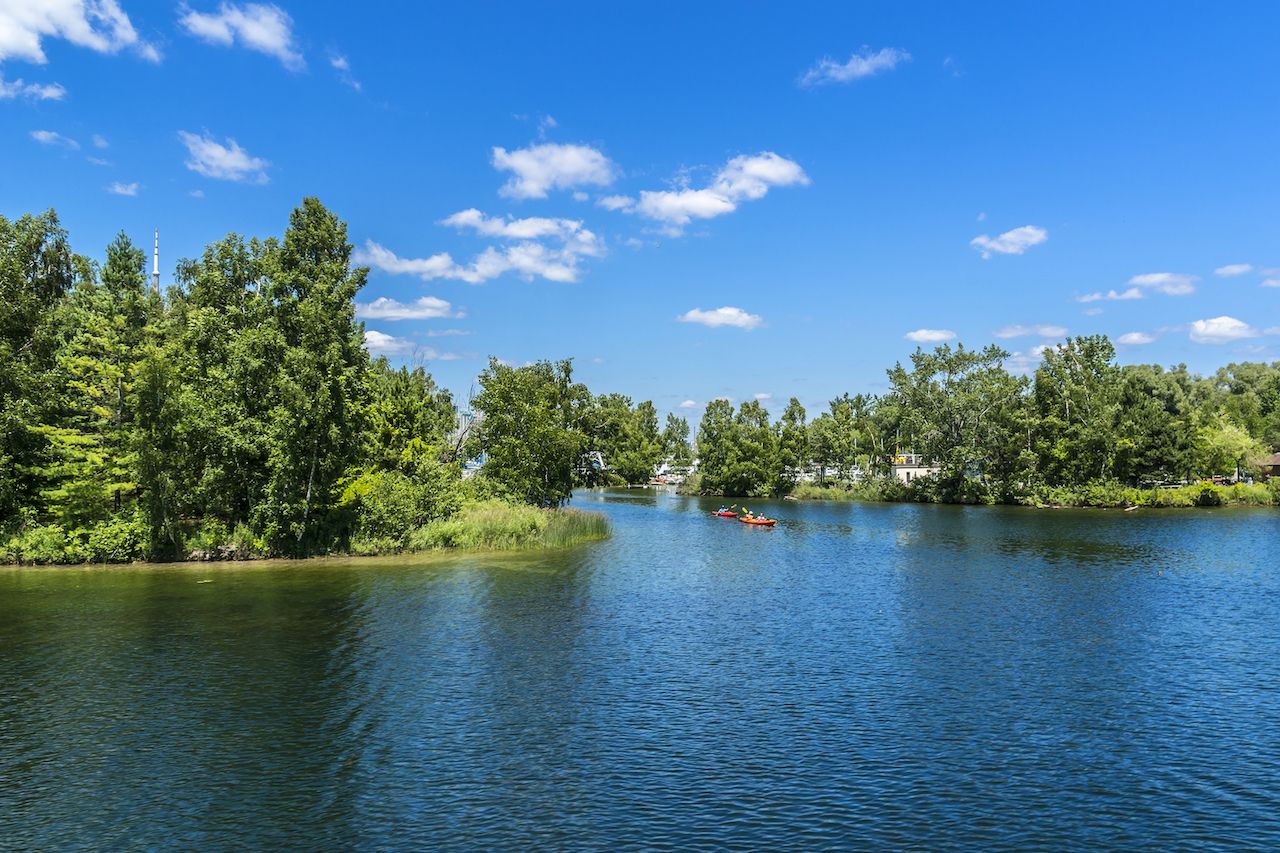 Toronto Islands — The Toronto Islands make for a wonderful visit, with everything to offer from beaches to an amusement park. To access the islands, take the ferry or a water taxi from the Harbourfront. The trip is quick and convenient, and on the way, you’ll be treated to beautiful views of the Toronto cityscape. The Toronto Islands are made up of several small islands, all but the smallest of which are connected via bridges. On foot, you can easily access the amusement park on Centre Island and lovely beaches, like the one on Ward’s Island. Otherwise, consider renting a bicycle to explore further. 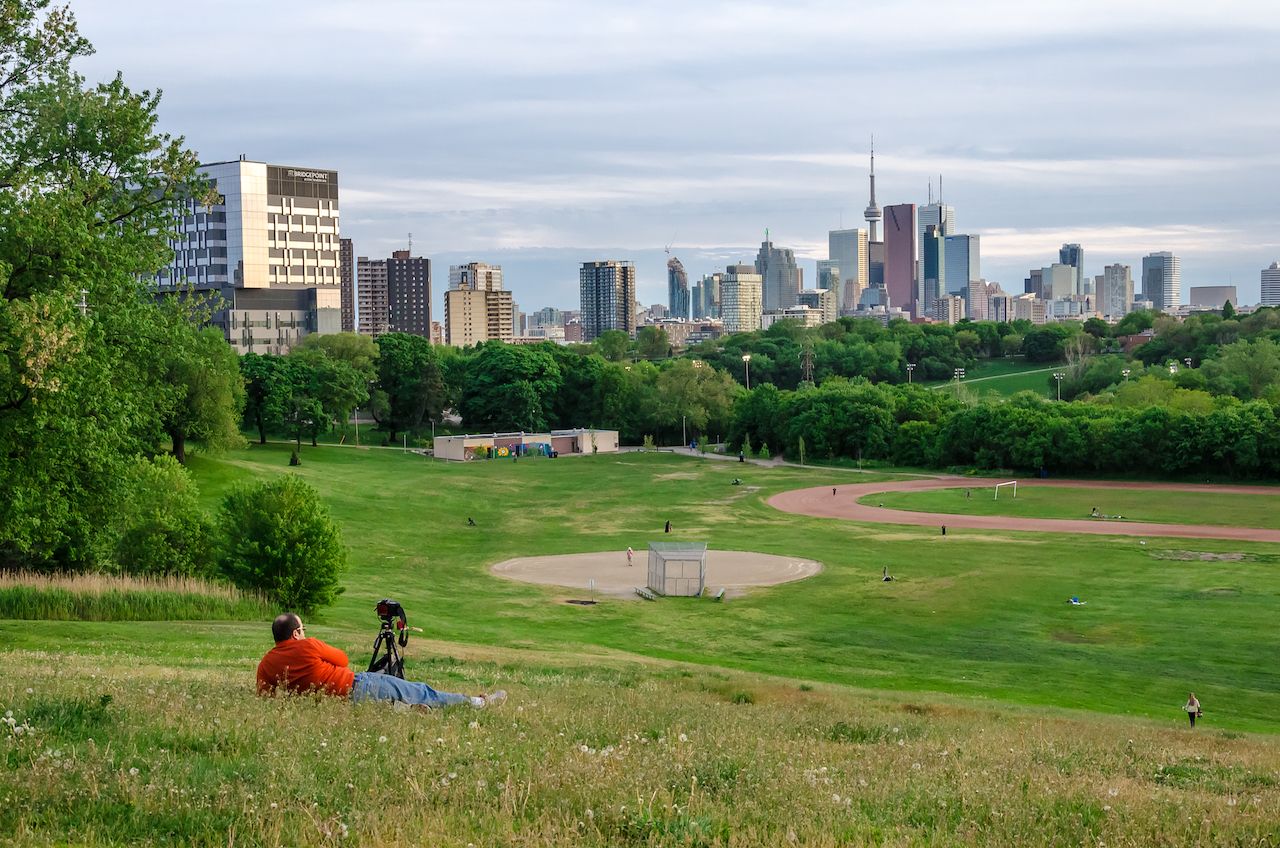 Riverdale Park — This 45-acre park on the east end has sloping lawns, perfect for lounging on, as well as baseball diamonds and a running track. There are beautiful views of the cityscape from the park’s highest points, some of which also make great sledding spots in winter. At the west end of the park is Riverdale Farm, a city-operated, publicly accessible farm. In the summer months, Riverdale Park shows movies under the stars for free — they’re all G-rated, for the kids. 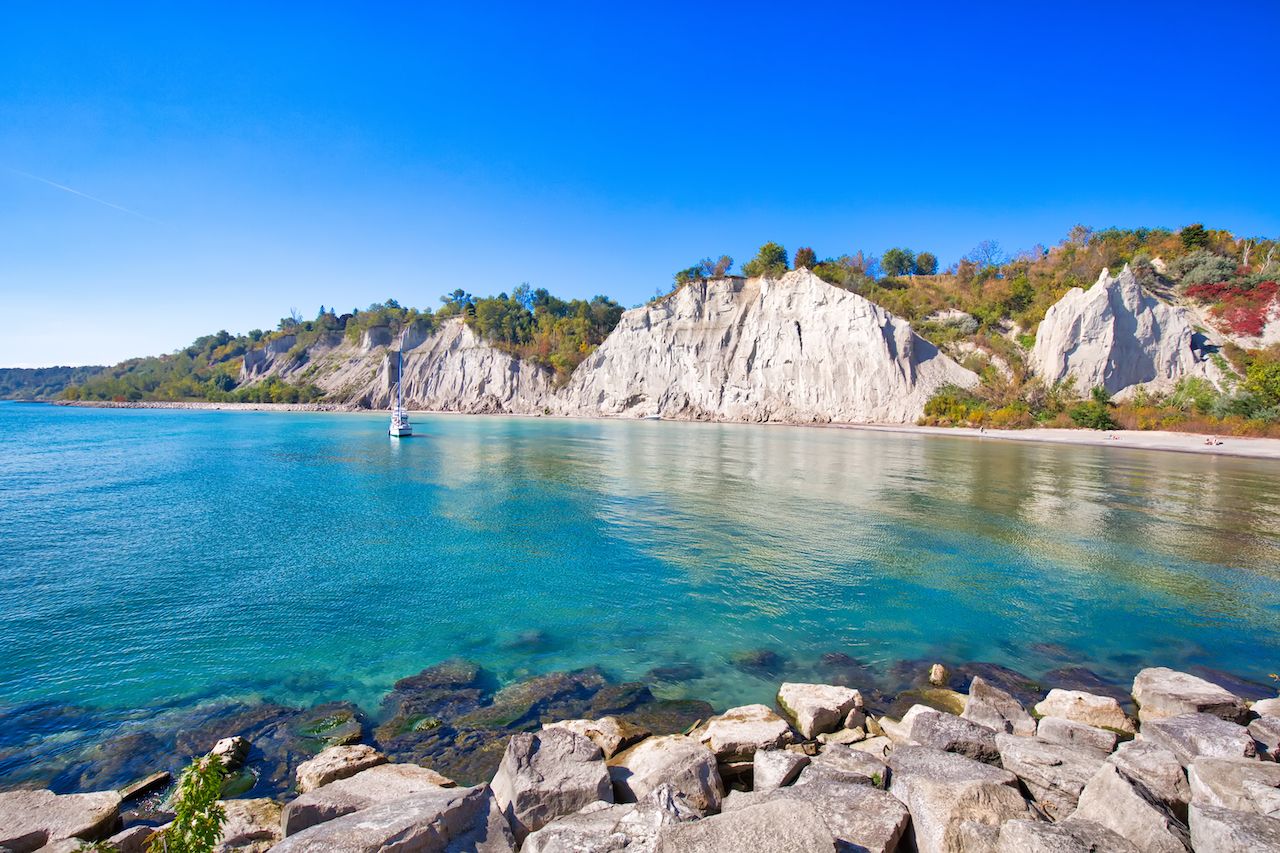 Scarborough Bluffs — The “bluffs” are a collection of parks that offer spectacular views of Lake Ontario, as well as beautiful beaches and hiking trails. Located in Scarborough, a suburb of Toronto, the views from Scarborough Bluffs are thanks to the cliffs — hence the name “bluffs” — that overlook the lake. These parks are a popular spot for shooting photos, thanks to the surreal blue water. You might think you’re in the Caribbean. 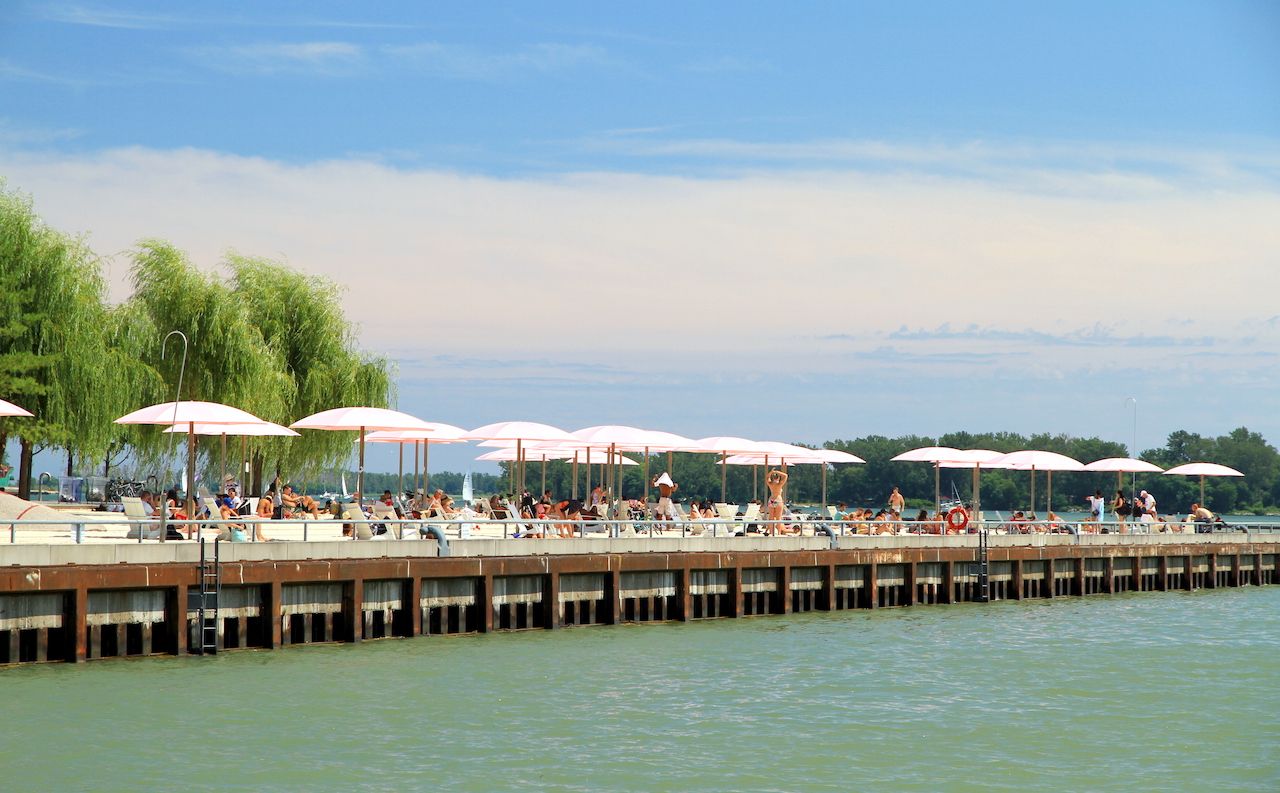 Sugar Beach Park — Formerly an industrial area along the waterfront of Lake Ontario, Sugar Beach Park is one of Toronto’s urban beaches. Although you can’t swim at this beach, the city has provided lounge chairs and iconic pink umbrellas, making it a great spot to claim a patch of sand for some reading, hangouts with friends, or to watch boats go by. 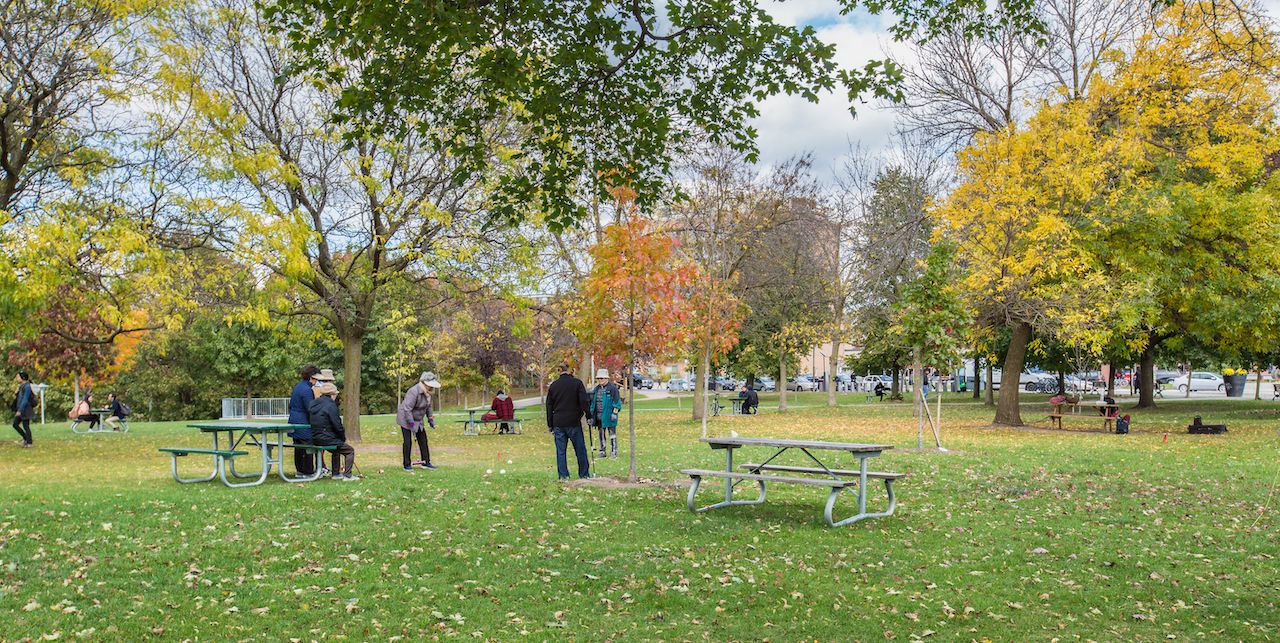 Christie Pits Park — Accessible by subway, this small park is a hub of activity because of its residential location. Christie Pits Park has a free public swimming pool, baseball diamond, children’s park, and, in the wintertime, a skating rink. This park is famous for its summer film program, the Christie Pits Film Festival. On Sunday evenings, locals gather to watch a themed film program.