From Chinatown, where you’ll find the best dim sum, to High Park, aptly named after its massive greenspace, to the Village, the center of LGBTQ+ celebration Pride Toronto, Toronto’s neighborhoods are all beautifully unique and reflect the city’s diversity. While some, like the Entertainment District, are trendy and upscale, other neighborhoods like Queen Street West and the Annex have a hipster, artsy vibe. Neighborhood hopping is a great way to expose yourself to the many facets of Toronto, and because the city is so well connected by public transport, exploration can all be done on foot. Here is your guide to Toronto’s most popular neighborhoods, and what to do when you visit them. 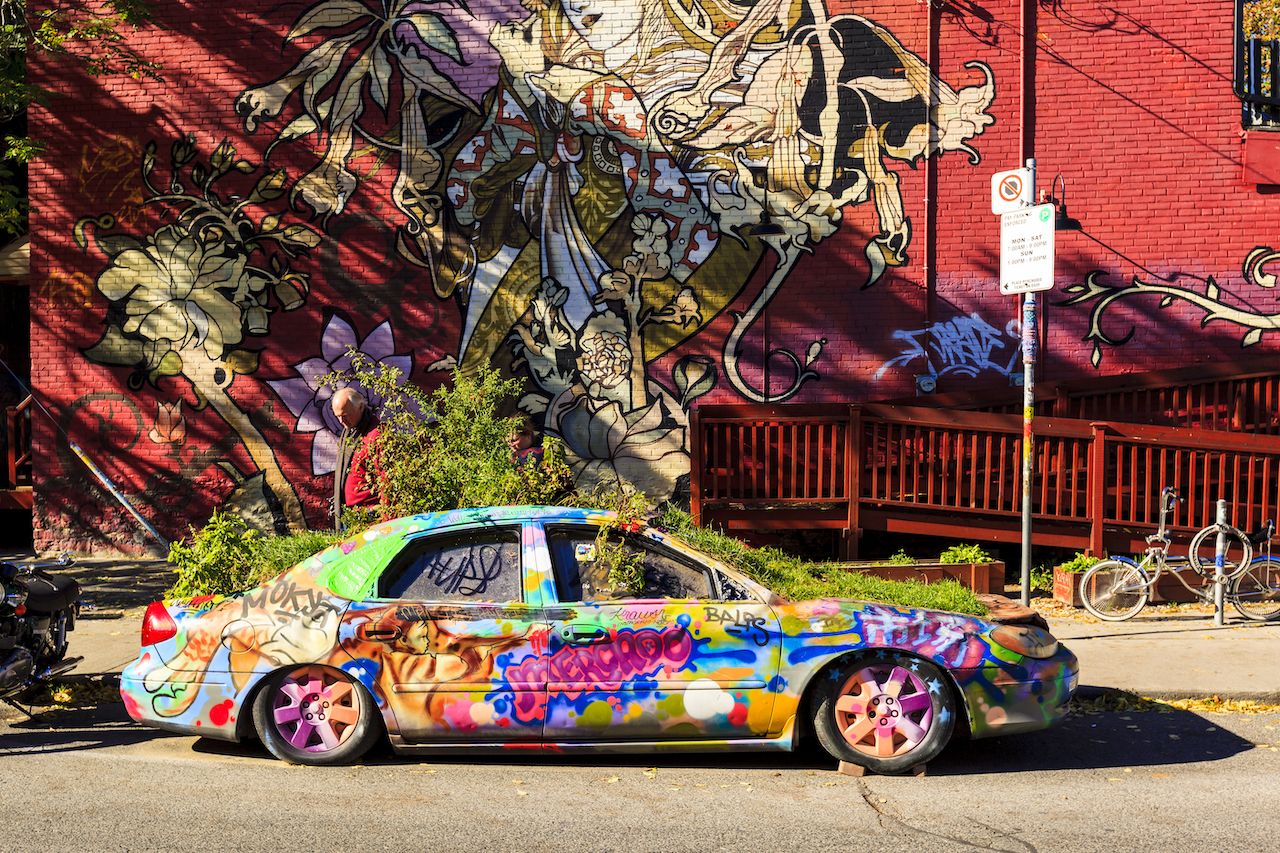 Kensington Market — Kensington Market is a designated National Historic Site of Canada. Kensington is characterized by its laid-back, artsy vibe as found in its eclectic shops, vintage clothing shopping, ethnic restaurants, street food, bars, street performers, and street art. Parked at the north end of Augusta Avenue in the neighborhood, you’ll find the famous garden car. This repurposed vehicle has foliage bursting out of its roof, windows, doors, and trunk. Originally a statement of protest against cars and vehicles (and their impact on the environment), it is now considered a piece of public art and a permanent landmark in Kensington. Drop by Wanda’s Pie in the Sky for pies and sweets, Rasta Pasta for Jamaican fare, or head over to Pow Wow Cafe for Indigenous cuisine. Popular spots for a beer include Ronnie’s Local 069 and Handlebar, both dives bars. You can swing by Thirsty and Miserable for a wide, rotating selection of craft beers. If you’d rather play it safe, have a cup of joe at Cafe Pamenar. 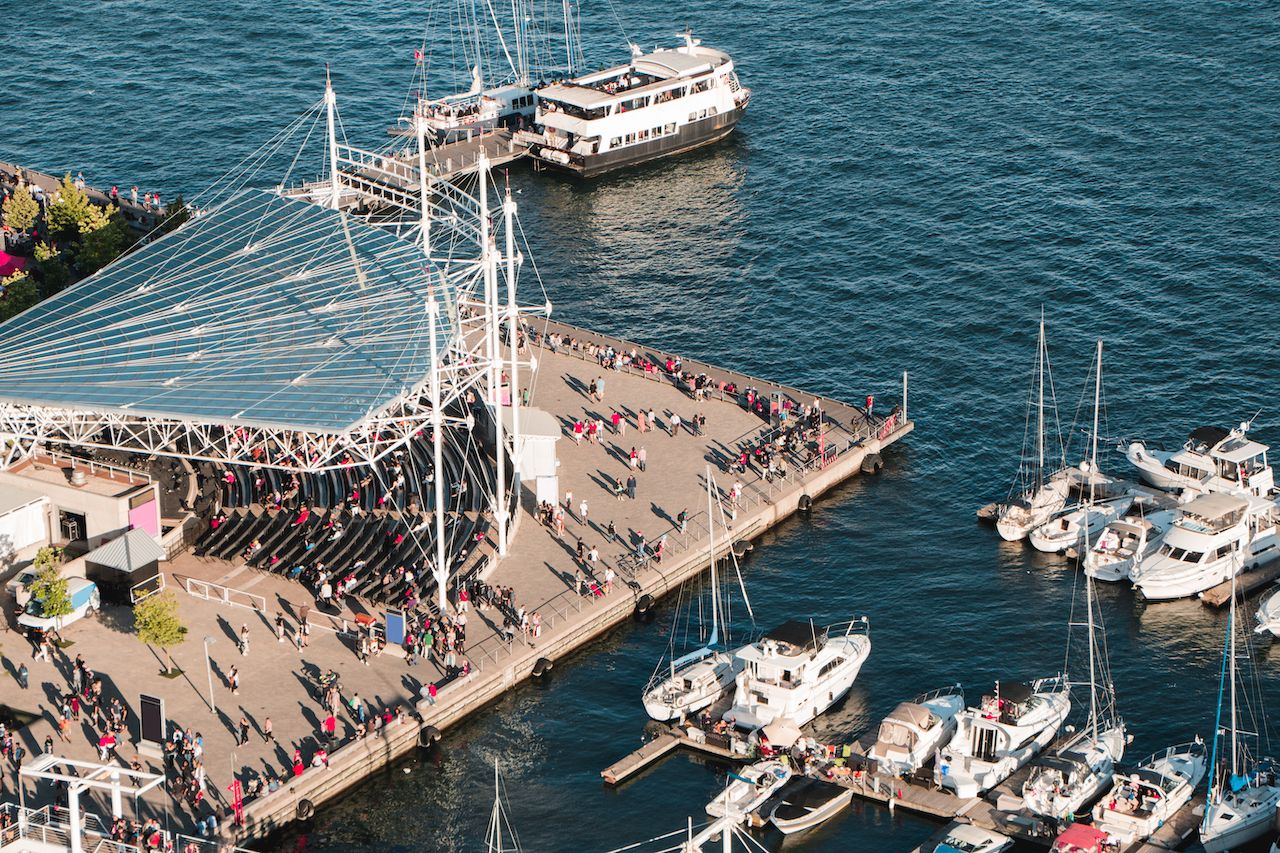 Harbourfront — On the northern shore of Lake Ontario and at the southern edge of the downtown core, Harbourfront is a long stretch of urban lakefront. To top off the beautiful views of the lake, the Harbourfront has parks, trails, breweries, restaurants, community activities, free concerts, and ferry connections to the Toronto Islands. Key spots include the Amsterdam Brewery, HTO Park for some sunbathing, and the famous waterfront “wavedecks.” The wavedecks are a collection of curvy docks that reflect the movement of Lake Ontario and its shores. Each wooden deck is artistic, beautiful, and perfect for lounging on. Harbourfront Centre is the neighborhood’s arts and culture hub and is home to four craft studios: ceramics, glass, metal, and textiles. During the summer the area has free concerts and performances every weekend, and during the winter, do as Canadians do and go for a skate at the Harbourfront’s free open-air ice rink. Finally, Harbourfront is your gateway to the Toronto Islands — hop in a ferry to head there from the Jack Layton Ferry Terminal and enjoy the spectacular views of Toronto’s skyline from the deck. 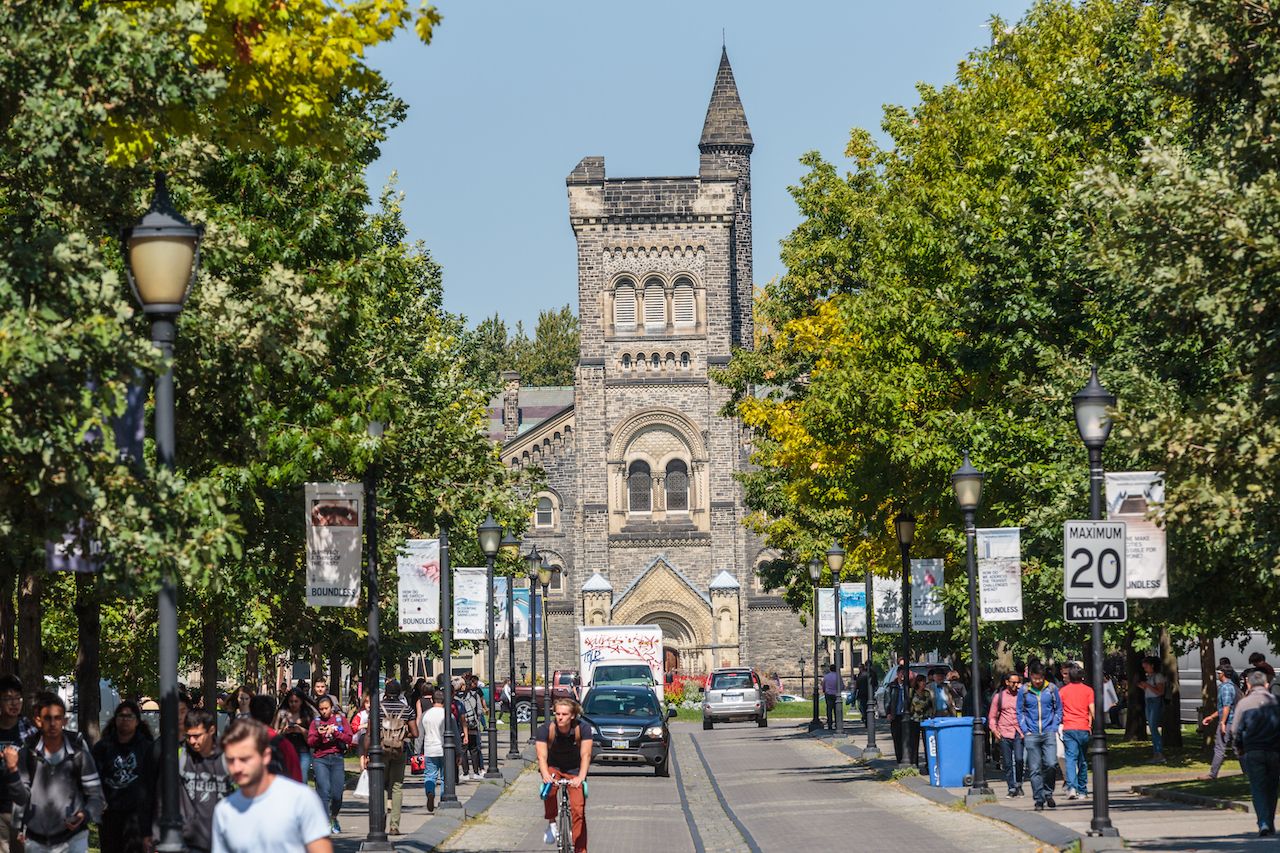 Yorkville and the Annex — Once the hippie hangout of Toronto, Yorkville and the Annex have evolved into elegant neighborhoods, home to high-end shopping and the University of Toronto. Known as a fashion district, Yorkville is where you will find haute couture shops such as Louis Vuitton and Hermès. This neighborhood is perfect for relaxation treatments, with access to spas, including The Spa at the Four Seasons Hotel Toronto. Despite its chic reputation, with proximity to the University of Toronto, student presence means there are many coffee shops, galleries, and bookstores to peruse besides chic boutiques. Toronto’s favorite bookstore, BMV, is nearby. 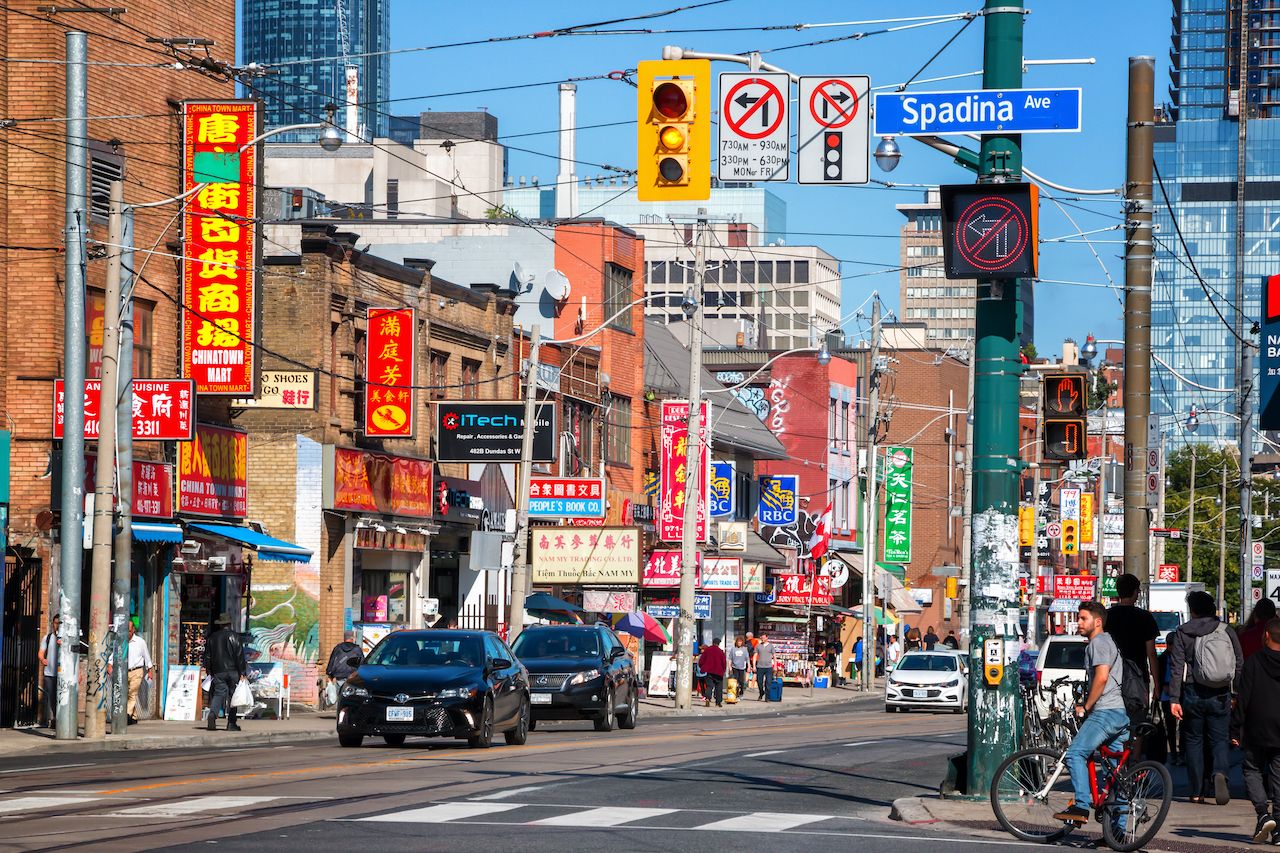 Chinatown — Toronto’s Chinatown is a neighborhood that has historically been home to immigrants from Hong Kong and China. Most businesses in the neighborhood, including medical centers and banks, offer services in Chinese languages. Chinatown is best explored on foot, allowing you to pop into the various shops and wander past street vendors. Mother Dumplings is a popular spot for dumplings, and Rol San for Sunday dim sum. On the outskirts of Chinatown is the Art Gallery of Ontario, which displays a variety of genres, including the works of emerging First Nations artists. Hot tip: The AGO is free on Wednesday nights. 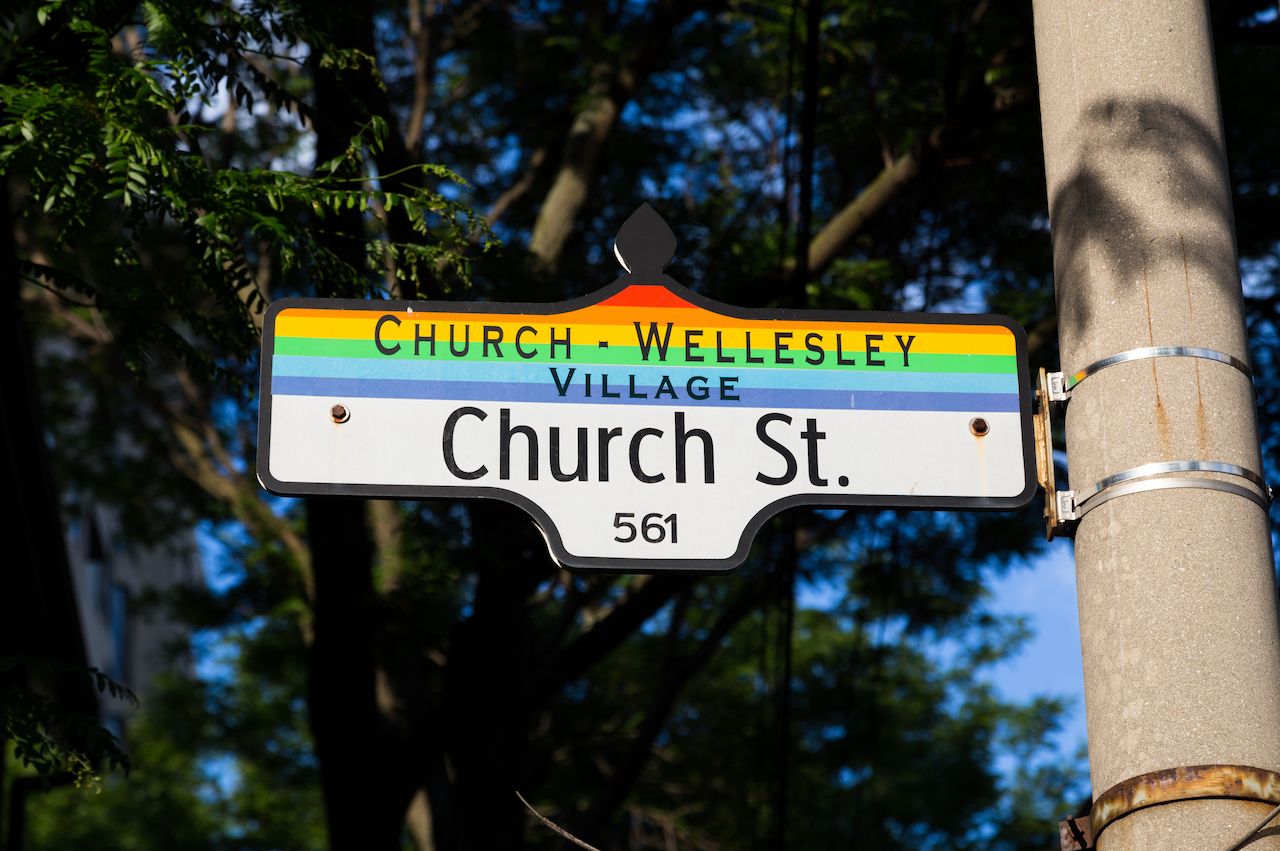 The Village (Church and Wellesley) — Toronto’s Gay Village, known locally as “The Village” is the historic home of the city’s LGBTQ+ community. Every summer, the area hosts Toronto Pride, but the neighborhood is vibrant with activity throughout the year. Drop by The Village for cafes, restaurants, LGBTQ+ oriented shops, entertainment, and nightlife. Some staples include the Buddies in Bad Times Theatre, which has a year-round program that includes a full season of queer theater, festivals, artist residencies, and intergenerational training and education initiatives. Crews & Tangos nightclub is a safe and inclusive spot for drag shows, and Pegasus Comedy offers queer-friendly comedy nights. For craft beer and pub fare, the Hair of the Dog Pub has you covered, or visit Smith for French fare. 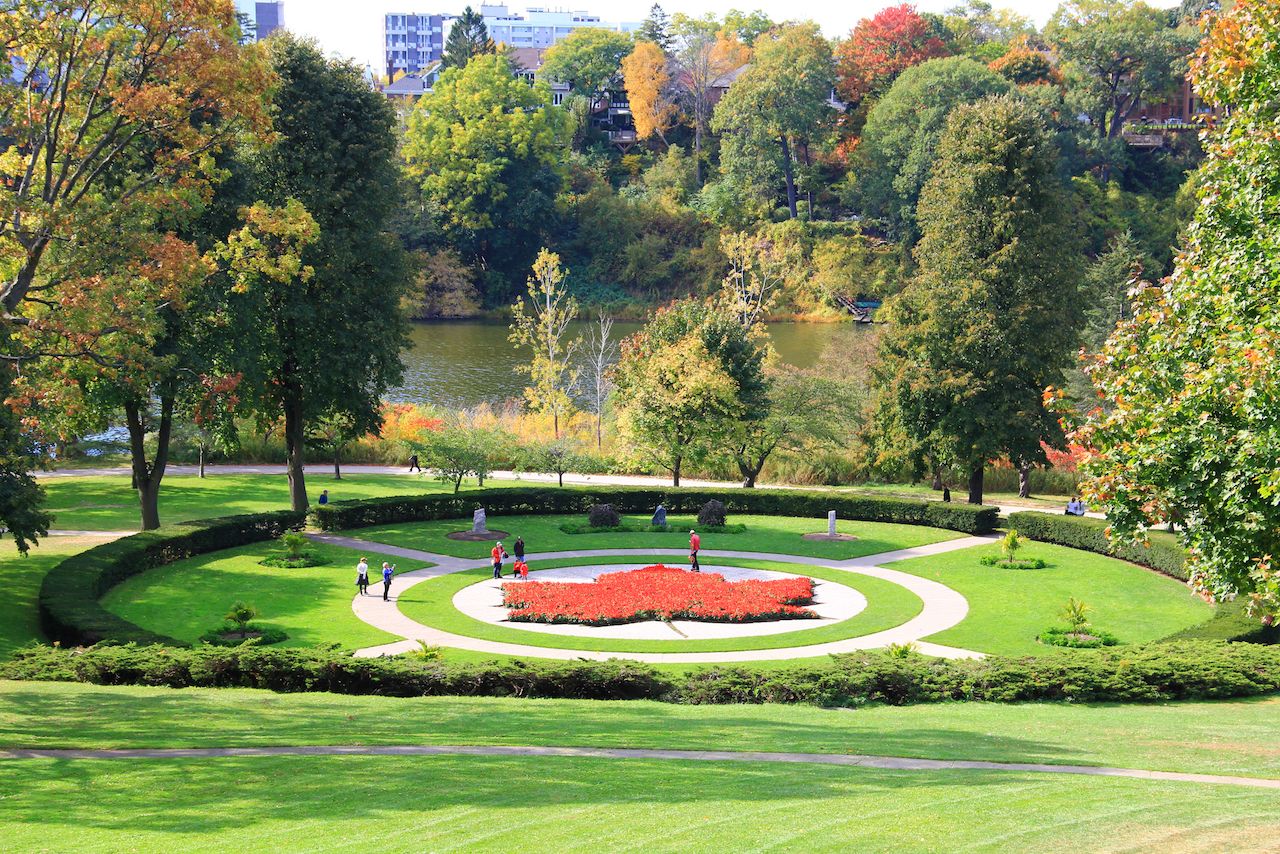 High Park — High Park is a quiet, residential neighborhood about a 30-minute subway ride away from the downtown core of Toronto. The neighborhood is appropriately named after Toronto’s largest greenspace — a park of 400 acres full of forest, trails, and spots to relax. In April and May, visit to see the many cherry blossoms. During the summer months, settle into the grass alongside one of the park’s ponds for a picnic with the locals. 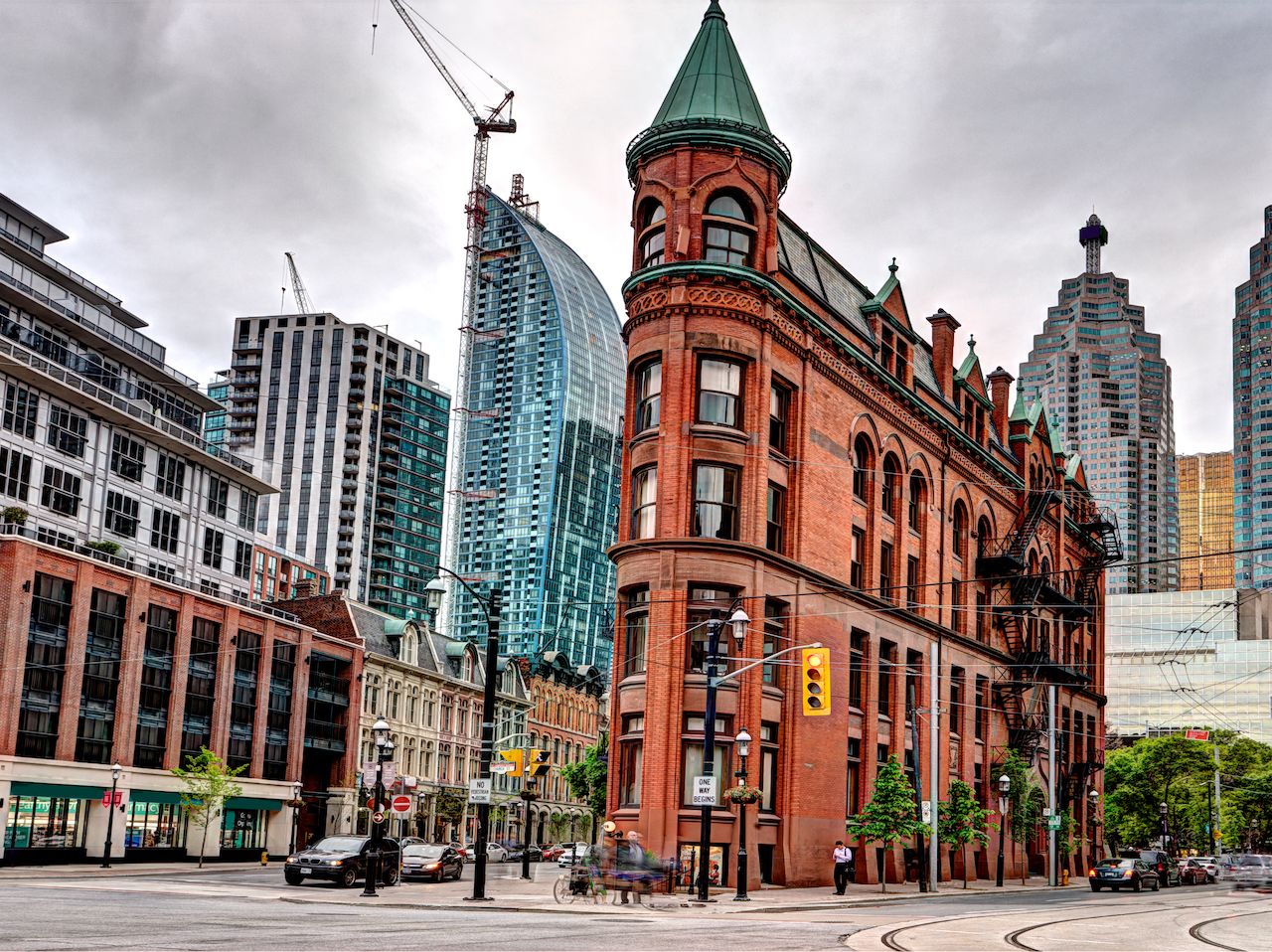 Distillery District — The Distillery District, as its name indicates, is a historic neighborhood that once housed a large whiskey distillery called the Gooderham and Worts Distillery. The distillery was founded in 1832 and by 1860, it was the world’s largest whiskey distillery. In the 1900s the distillery became progressively derelict and was no longer in operation by 1990. In the early 2000s the lots were bought so the area could be revitalized. The district today is characterized by its industrial 19th-century architecture, cobblestone streets, and St. Lawrence Market, an indoor public market that has artisanal shops and plenty of food stalls. In the pedestrian-only Distillery District, you will find hip indie restaurants, boutiques, galleries, and public art. Nearby is the Ontario Spring Water Sake Company, which is eastern North America’s first sake brewery. There you can enjoy a tour and sake samples, and buy your own freshly pressed, unpasteurized, and unfiltered sake to bring home. While you’re in the area be sure to walk past the Gooderham Building. This historic office building is known as Toronto’s “Flatiron” building. If you’re in the city around Christmas time, check out the neighborhood’s famous Christmas market. 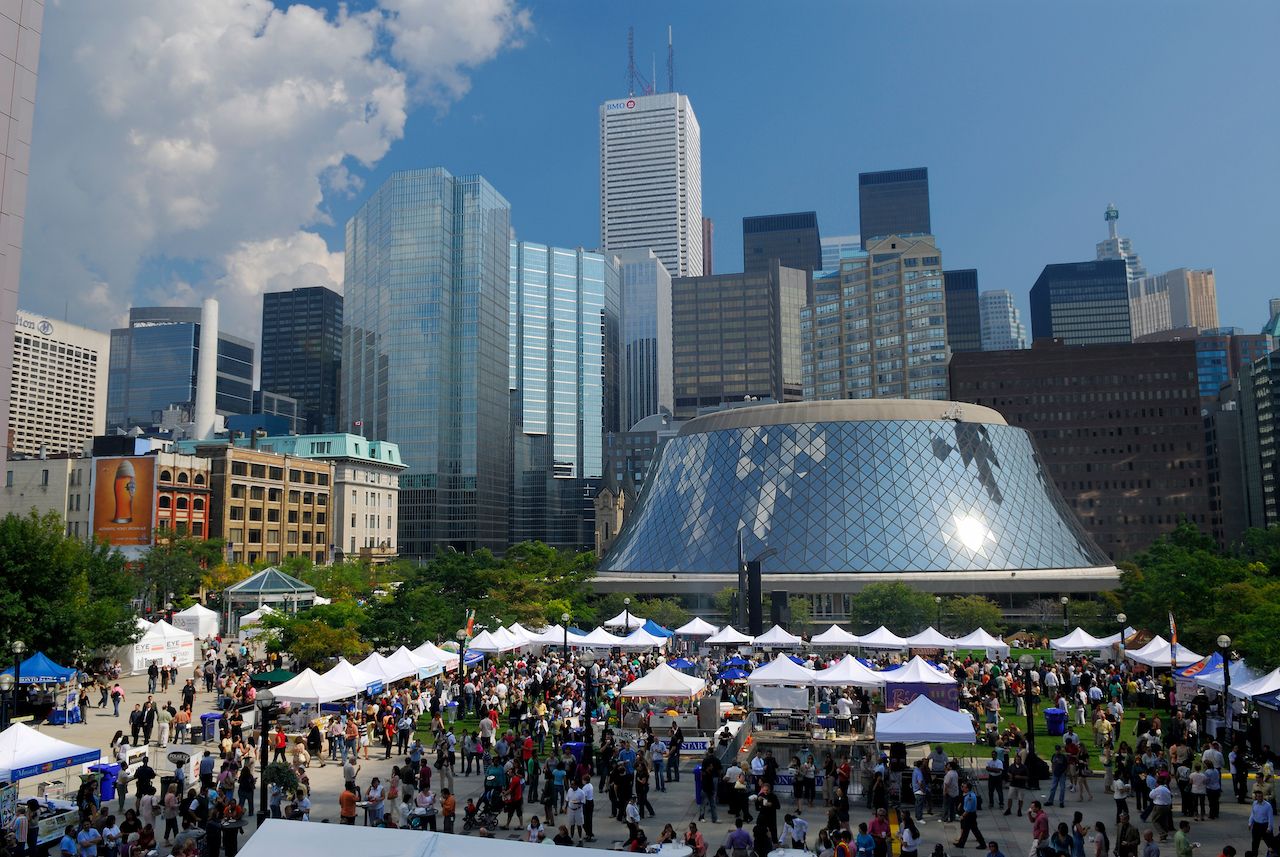 The Entertainment District — The Entertainment District is the core of Toronto and a hub of activities and experiences. This is where you’ll find the famous CN Tower. This freestanding building is a communications and observation tower that held the record for the tallest building in the world from 1975 to 2009. The tower has several viewing decks, including a glass floor that allows for straight-down exhilarating views. Visitors can also dine in the high-altitude restaurant, or do the thrilling “Edge Walk,” wherein participants in suits and harnesses circle the exposed top of the 1,167-foot-high building. For some evening comedy check out Yuk Yuk’s comedy club, and the famous Toronto International Film Festival offers daily screenings and media exhibits throughout the year in its permanent theatre. While in the area, swing by Union Station Toronto to admire the architecture and beautiful interiors. In 1975, Union Station was designated a National Historic Site of Canada for its fine example of classical Beaux-Arts style. For the beer drinkers, Steamwhistle Brewery offers tours of its premises and samples of craft beer. 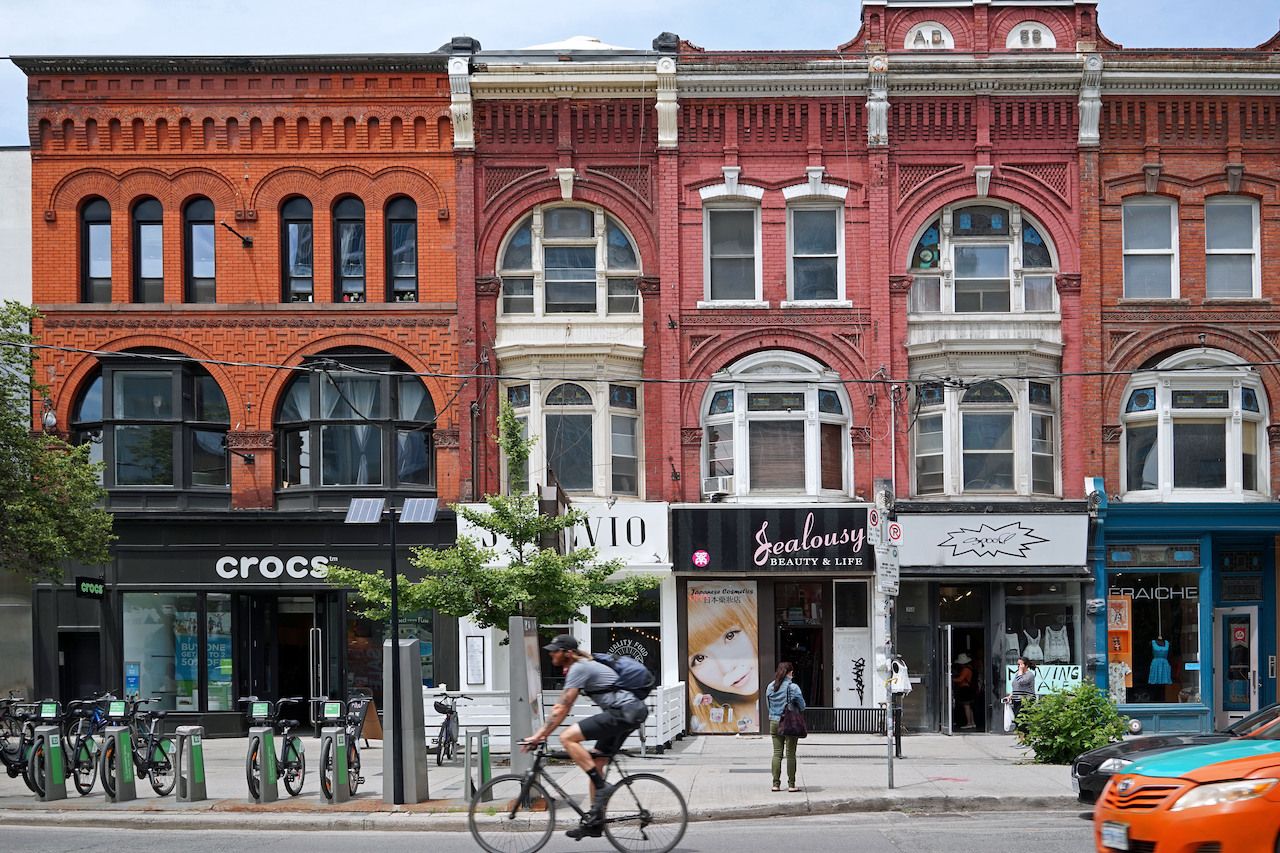 Queen West — Queen West is Toronto’s enclave for all things trendy and hip. Filled with restaurants, boutiques, tattoo shops, bars, and patios, it’s the perfect spot to spend a lazy afternoon. The famous graffiti alley is a hot spot for Instagram-worthy pictures or wander further west to check out the Trinity Bellwoods craft brewery if beer is what you’re after. Directly across from the brewery is Trinity Bellwoods Park; this public green space is packed every weekend of the summer with picnickers, dog walkers, slackliners, cyclists, and drum circles. 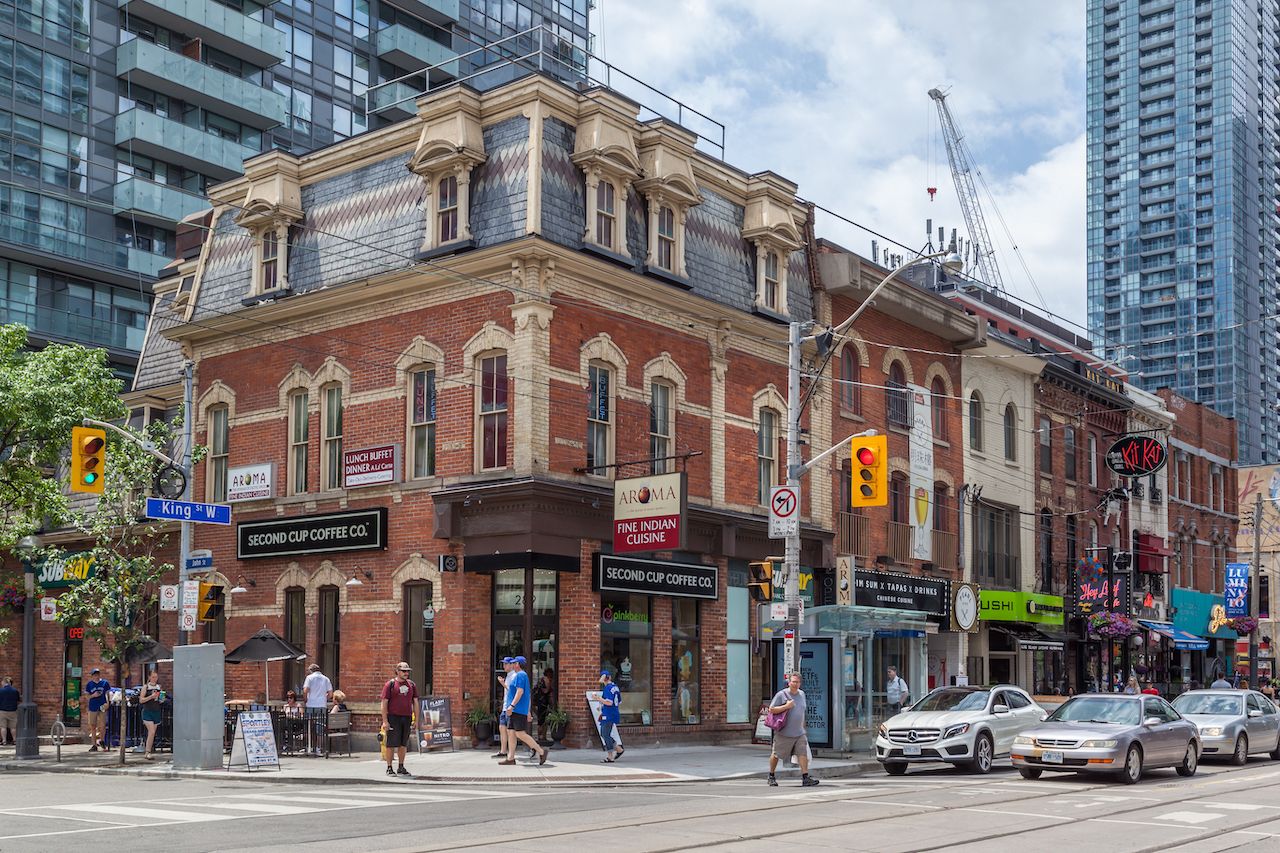 King West Village — This swanky neighborhood is filled with advertising agencies, condos, upscale restaurants, and nightclubs. If you’re hoping for a wild night out while in the city, this is the place to be. Begin your evening with dinner and cocktails at Cibo Wine Bar or Portland Variety. Then take your pick of bars and clubs to party the night away. Head over to Bar Hop to enjoy its extensive menu of craft beers (there are 25 on tap at any given time) or head over to The Everleigh or The Citizen to dance.