It doesn’t matter if you’re interested in ‘90s throwback dance parties or smoky hole-in-the-wall dive bars — Philadelphia has enough bars, clubs, and lounges to satisfy anyone’s taste. If you want a gay bar with a rich history, Philadelphia has it. You want a dance club with a ‘50s diner aesthetic? Philadelphia has that, too. And if you want a bar with its own functional library — you get the point. These are the best bars and clubs in Philadelphia’s hottest neighborhoods. 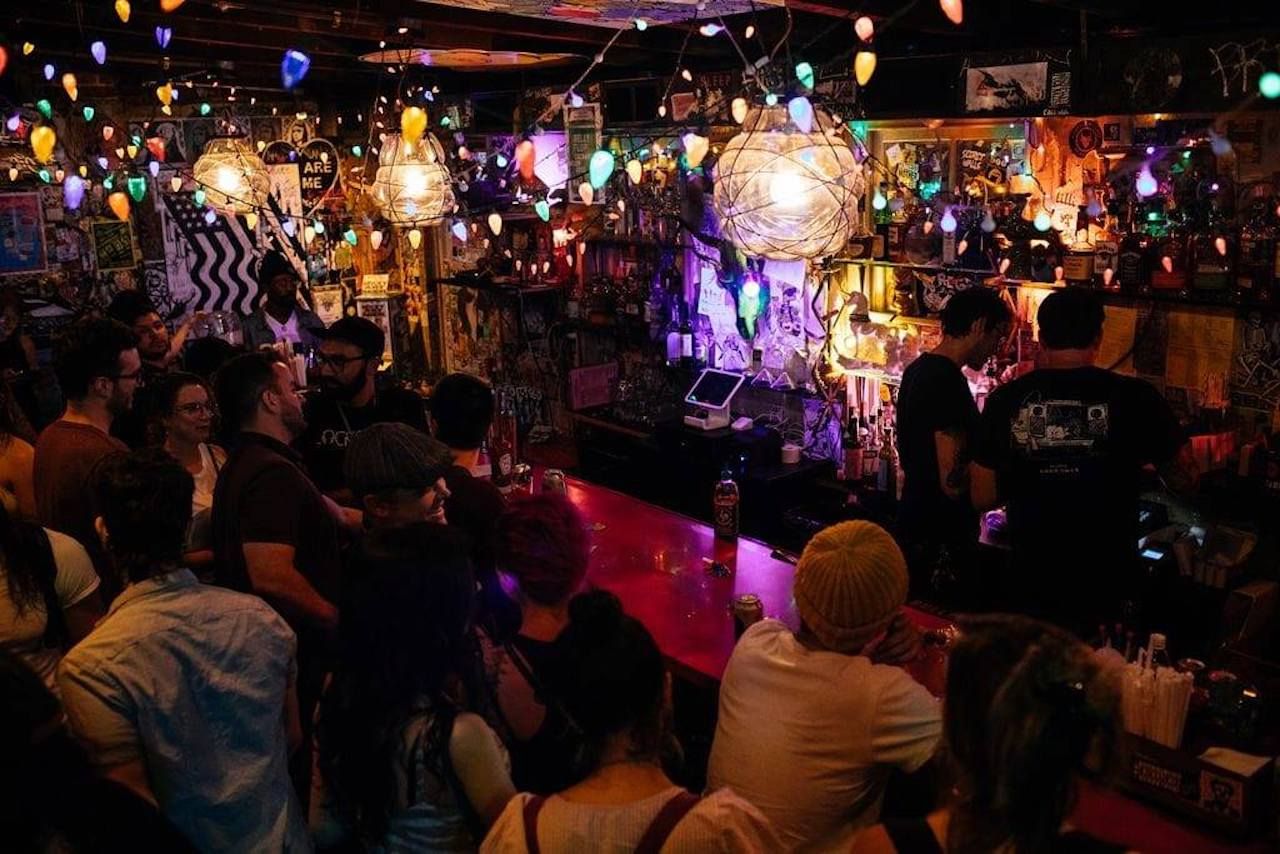 Tattooed Mom $ — Tattooed Mom embraces South Street’s special style. The bar focus is on beer and custom, often off-beat, cocktails like the Xmas Punk (a holiday cocktail with applejack, Port, and ginger liqueur) and Pickletini (yes, that’s a pickle-flavored Martini). Vegans love it for its vegetarian menu with options like veggie corn dogs. If that’s not enough to make you love this spot, there are two happy hours every day (one from 5:00-7:00 PM and a later one from 10:00-11:00 PM) as well as alternative events like SLAYHer, which is a heavy metal drag show.

McGlinchey’s $ — With its grungy, down-to-earth atmosphere, McGlinchey’s is a true dive bar. It’s a great place to hang out with friends on a budget. Grab a booth, split a pitcher of beer, and munch on 75-cent hot dogs. It’s also one of the few dive bars where you’ll actually want to use the bathroom, as McGlinchey’s restroom is tagged by so many graffiti artists that it’s practically a piece of art in and of itself.

Writer’s Block Rehab $$ — Most people don’t expect to find a library in a bar, but Writer’s Block Rehab (don’t let the name fool you, it is an actual bar) makes it seem as natural a combo as peanut butter and jelly. Browse through the upstairs library and then head downstairs to lounge on a sofa with a Martini. Writer’s Block Rehab is also known for its unusual decorations, like chandeliers made of globes, bookshelf wallpaper, and a giant Scrabble mural. Go for a cerebral, artistic atmosphere while you drink. 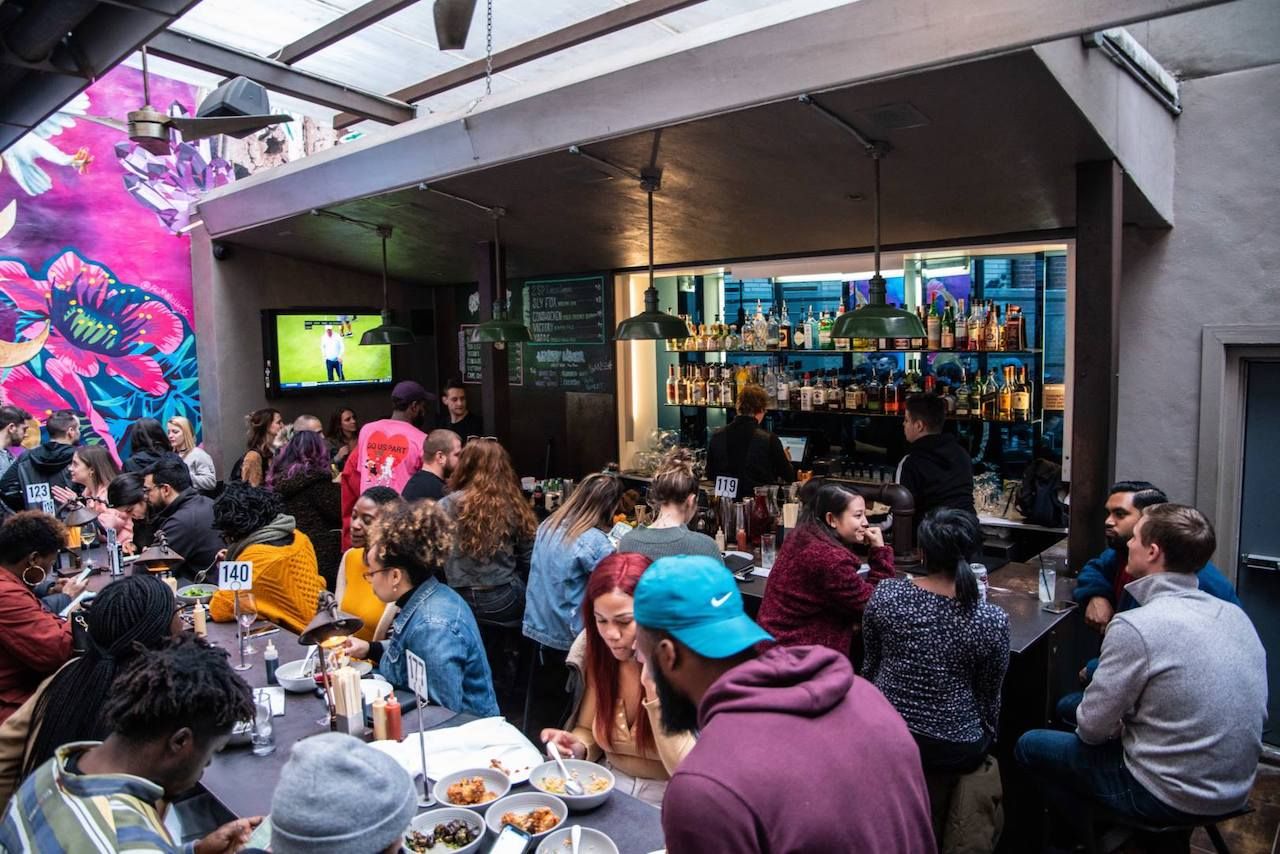 Graffiti Bar $$ — This patio bar is the place to unwind in an unconventional environment. It’s atypical in part because of its location. The Graffiti Bar is in the alley behind Sampan’s pan-Asian restaurant, surrounded by a chain-link fence. It might be hard to find, but you’ll know you’re there once you see it. The walls and tables are all tagged by local graffiti artists, displaying an eye-popping array of color that gives the Graffiti Bar a punk-hip-hop vibe. There’s a daily cocktail special, as well as beer and wine. Small bites from Sampan’s are available as well. The patio is open year-round, with heat lamps making the spot a draw even in the winter.

Woody’s $$ — Woody’s is Philly’s most famous gay bar and is often ranked as one of the best gay bars in the country. Going strong since the 1980s, it attracts people of all orientations. It has a blend of great dance music, a coffee room, and a $5 happy-hour menu that includes mango Margaritas and Vodka Redbulls. 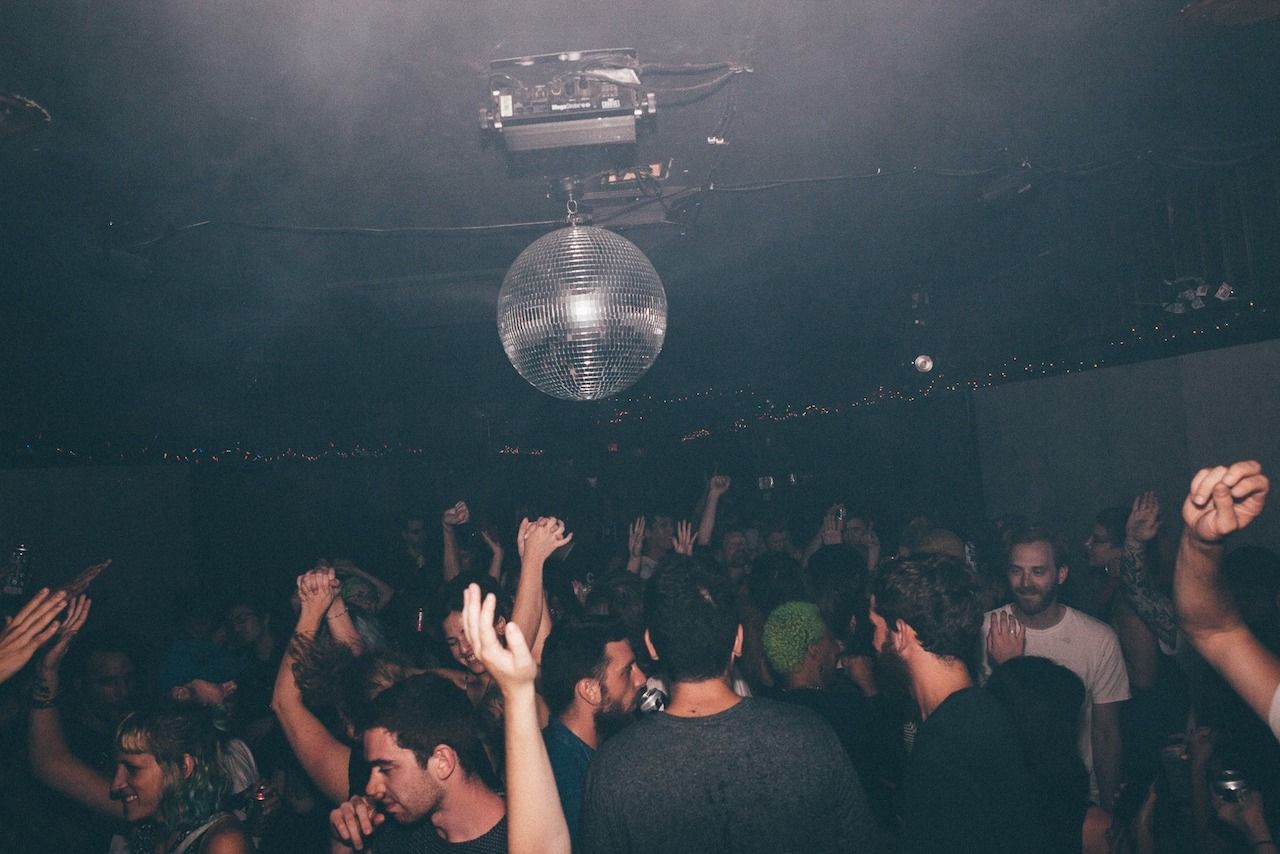 Dolphin Tavern $ — This South Philly dance club knows how to throw a party without busting your bank account. The club knits together indie style, light up dance floors, and burlesque dancers. There’s always something going on, whether it’s Disco Italiana night or throwback themes from the 1980s to the early 2000s.

Bob and Barbara’s Lounge $ — Bob and Barb’s is a staple among Philly dive bars. It has remained relatively unchanged since its opening in 1969. The bar attracts everyone from hip college students to blue collar workers grabbing a drink after their shift. There’s always some kind of live performance going on, including a local jazz band that plays every Saturday and karaoke on Fridays. On Thursdays, Miss Lisa Lisa hosts Philadelphia’s longest running drag show. All of this makes Bob and Barb’s an interesting bar experience in the city no matter which night you go. 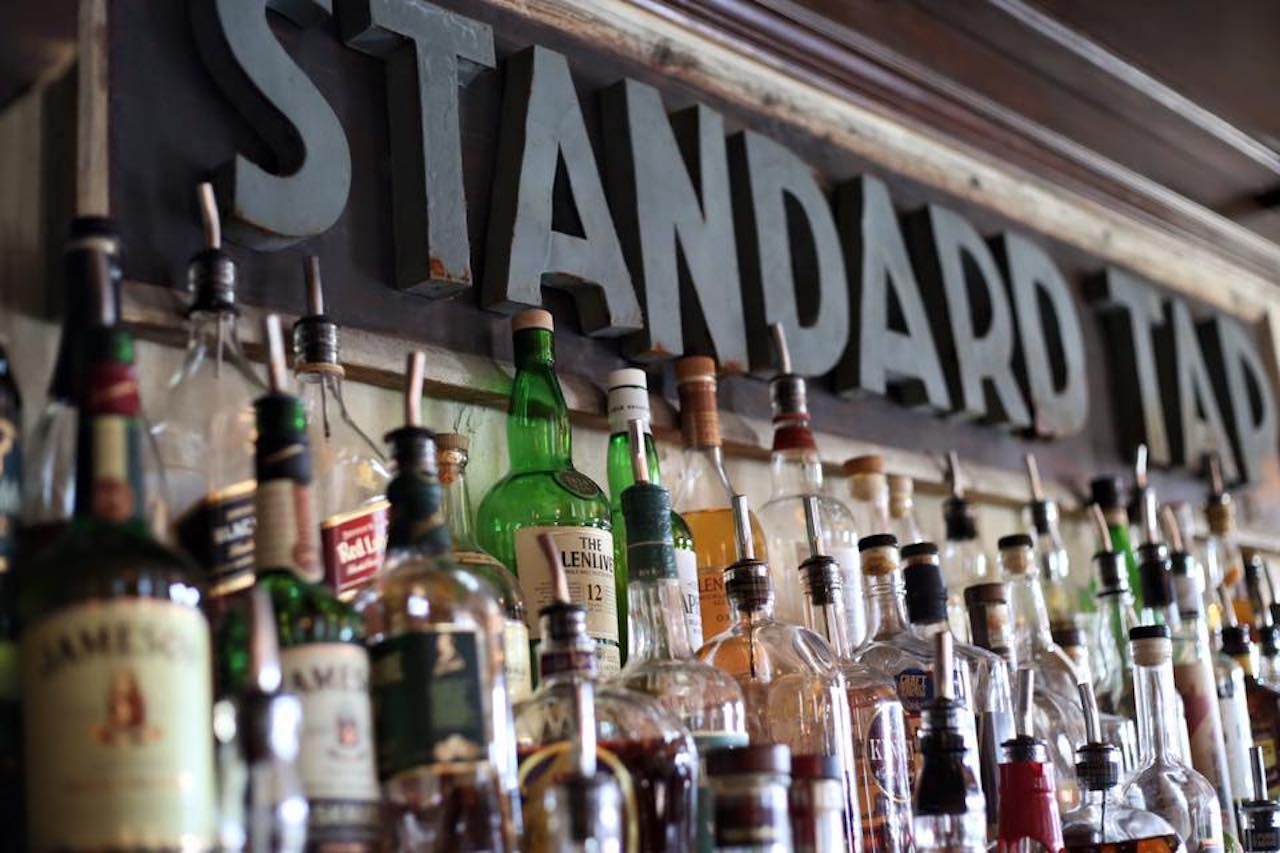 Standard Tap $$ — Located in a large white farmhouse, Standard Tap is one of the city’s oldest gastropubs and has a friendly, casual atmosphere. Standard Tap gives you a truly authentic Philly experience, and it takes pride in only using regional produce on the food menu and beers from local microbreweries at the bar. As an added bonus, it strives to be eco-friendly.

Silk City $$ — In a past life, Silk City was a 1950s-themed diner, and you can still see that in its blazing neon pink sign. It’s been reborn as a bar, dance club, and beer garden all in one. Silk City serves brunch until 3:45 PM (perfect if you’re a late riser) and dinner until 1:00 AM (perfect if you want a bite to eat after grooving on the dance floor). The beer garden is open in the warmer months if you want to relax outdoors, while the dance floor inside keeps the party going strong until close. 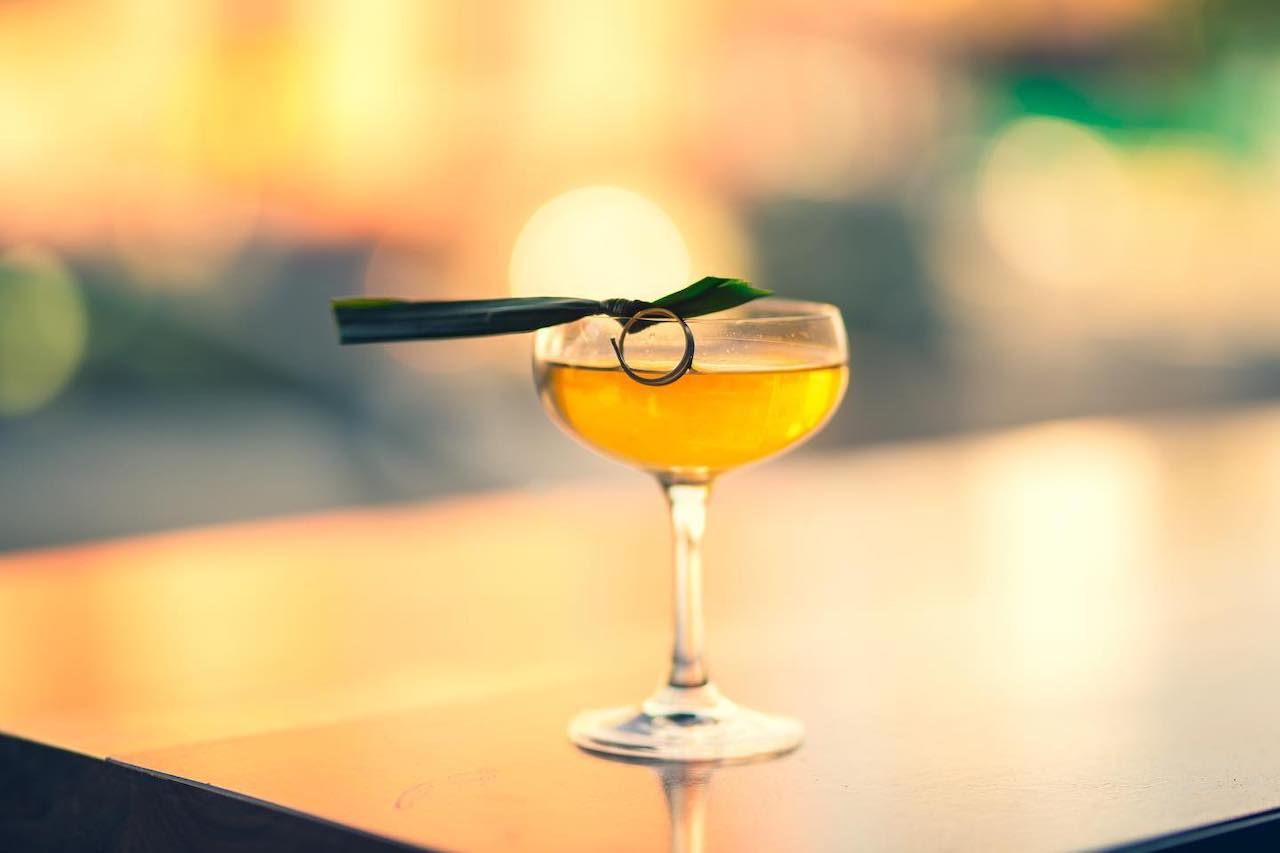 R&D $$ — This Fishtown cocktail lounge, with its dark curtains and pink-tinged lighting, has a calm, chill atmosphere. R&D is known for its original drinks and takes on classic cocktails like the Floradora (a flamingo-pink drink made with gin, raspberry, ginger, and lemon) and the Milk Punch (brandy, Jamaican rum, and milk with cinnamon and pineapple).

Johnny Brenda’s $$ — This revamped neighborhood tavern is one of the hottest hangouts in Fishtown. The first floor bar serves draft wine, local craft beer, and seasonal cocktails alongside a dinner menu that includes scrapple (the ultimate Philly breakfast food made with finely minced pork parts, cornmeal, and spices). The second floor’s music venue can comfortably fit 250 people and features local bands five nights a week. Johnny Brenda’s is perfect for anyone interested in Philadelphia’s music scene. 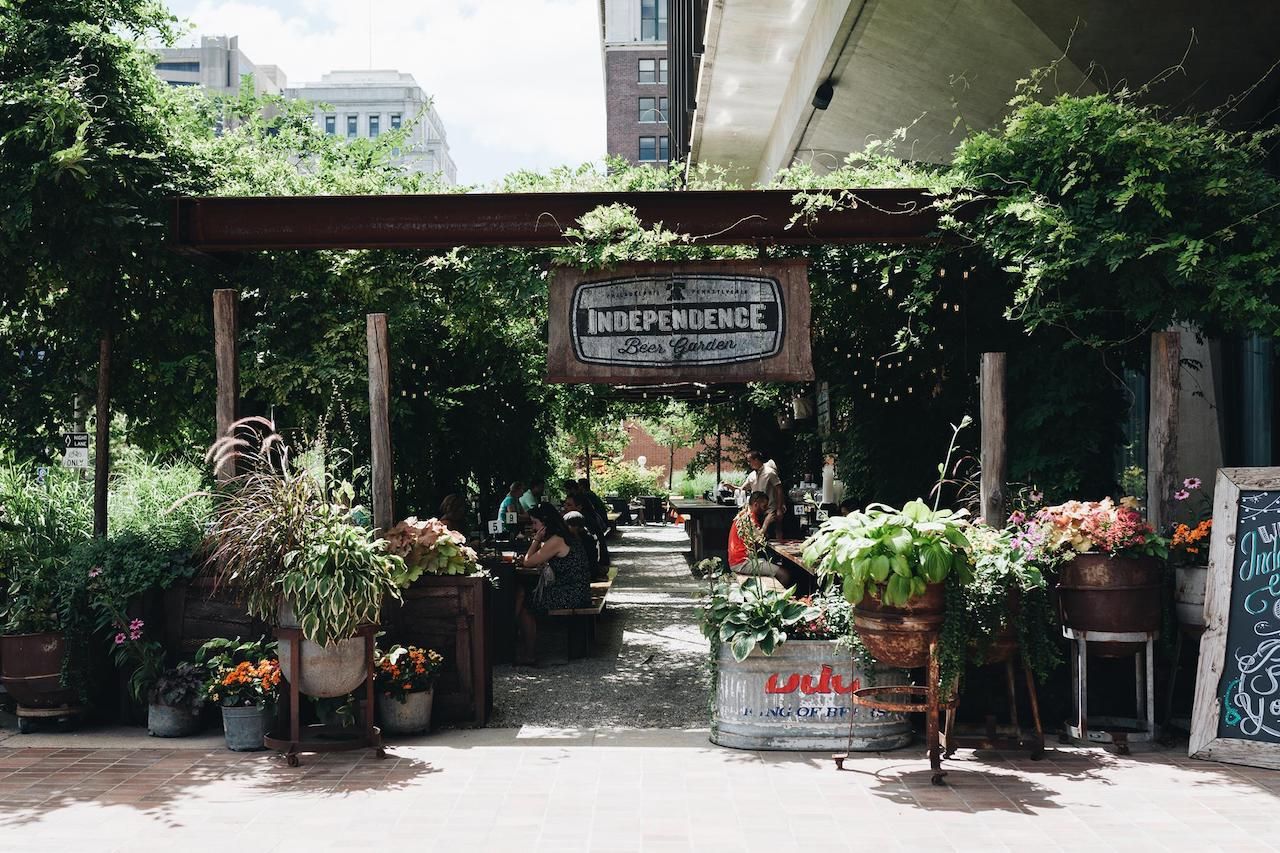 Independence Beer Garden $$ — Located next to the Liberty Bell and Independence National Park, Independence Beer Garden is a popular spot to order a beer after touring the historic sites. It’s only open in the warmer months when guests can bask in the good weather. Surrounded on all sides by trees and potted plants, it’s secluded from the city surrounding it despite being smack in the middle of the action. Order a boozy popsicle to beat the heat and get a buzz at the same time.

Mac’s Tavern $$ — Philadelphians love the show It’s Always Sunny in Philadelphia. The dark comedy is a point of city pride, even if it doesn’t always paint the city in a flattering light. This Old City tavern is co-owned by show creator Rob McElhenney, which is enough to make it popular, but Mac’s backs that up with a chill, down-to-earth atmosphere. It has a large selection of draft and bottled beer, which includes local breweries, British imports, and fruit ales. 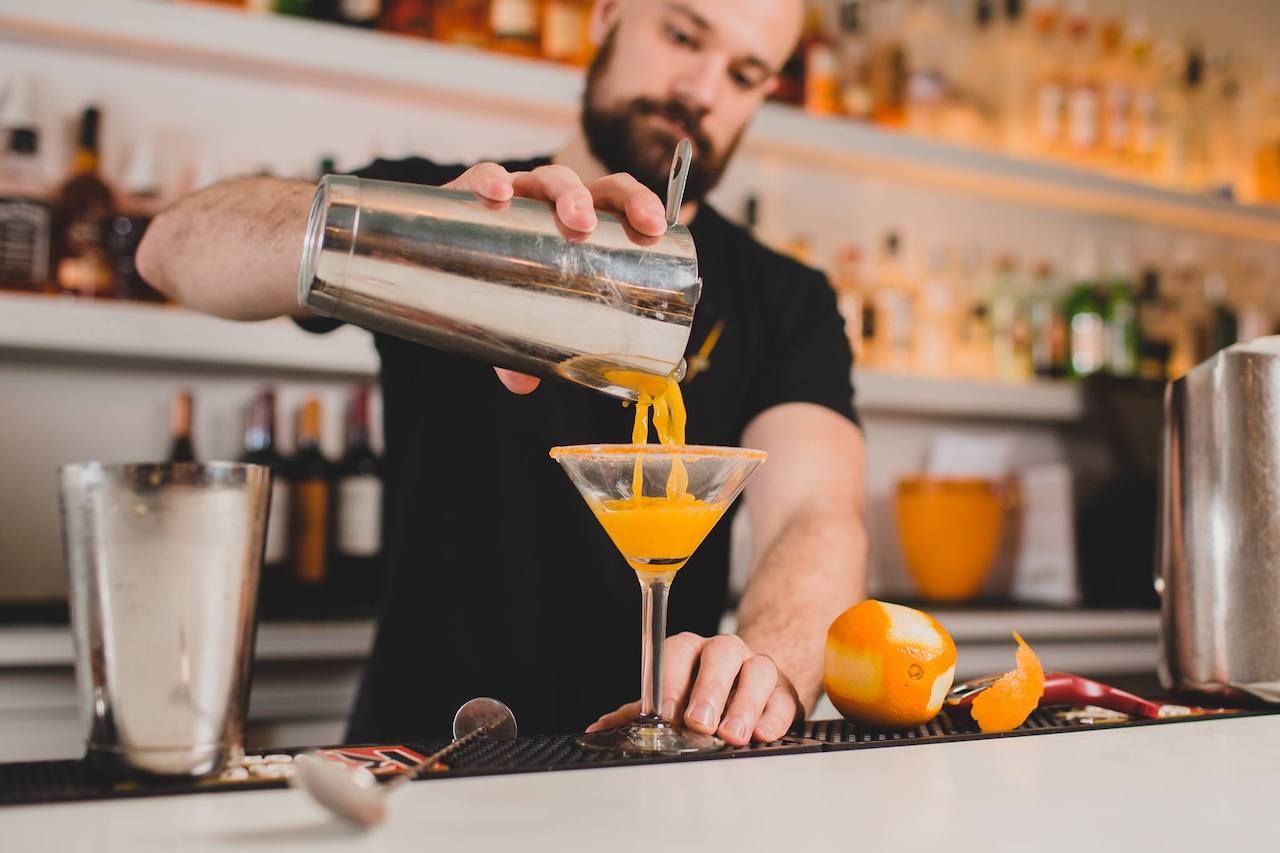 The Continental Restaurant and Martini Bar $$ — This bar blends together a classic Martini lounge with a 1950s diner aesthetic. The diverse menu has enough choices to please everyone in your group, whether they like Baja fish tacos, Korean pork, or lobster mac and cheese. Drinks include a short menu of wine and beer as well as cocktails. There’s a special section dedicated to all things Martini, as well.

Morgan’s Pier $$ — Morgan’s Pier is an outdoor beer garden and dance floor located on the Delaware waterfront with more than 40 beer options. It’s a party spot with a spectacular view, choice of craft beer and adult milkshakes, and live music. The outdoor stage features local and international DJs, as well as live music.