Because Philadelphia is such a large city, you’ll have your choice of hotels, hostels, and Airbnbs. Most hotels are in Center City, Rittenhouse, and Old City, where you’re within walking distance of popular restaurants and attractions. If you want something a little quieter, check out trendy neighborhoods like Fishtown and Northern Liberties, which have plenty of fresh new hostels and laidback hotels. These are some of the best places to stay, no matter the budget. 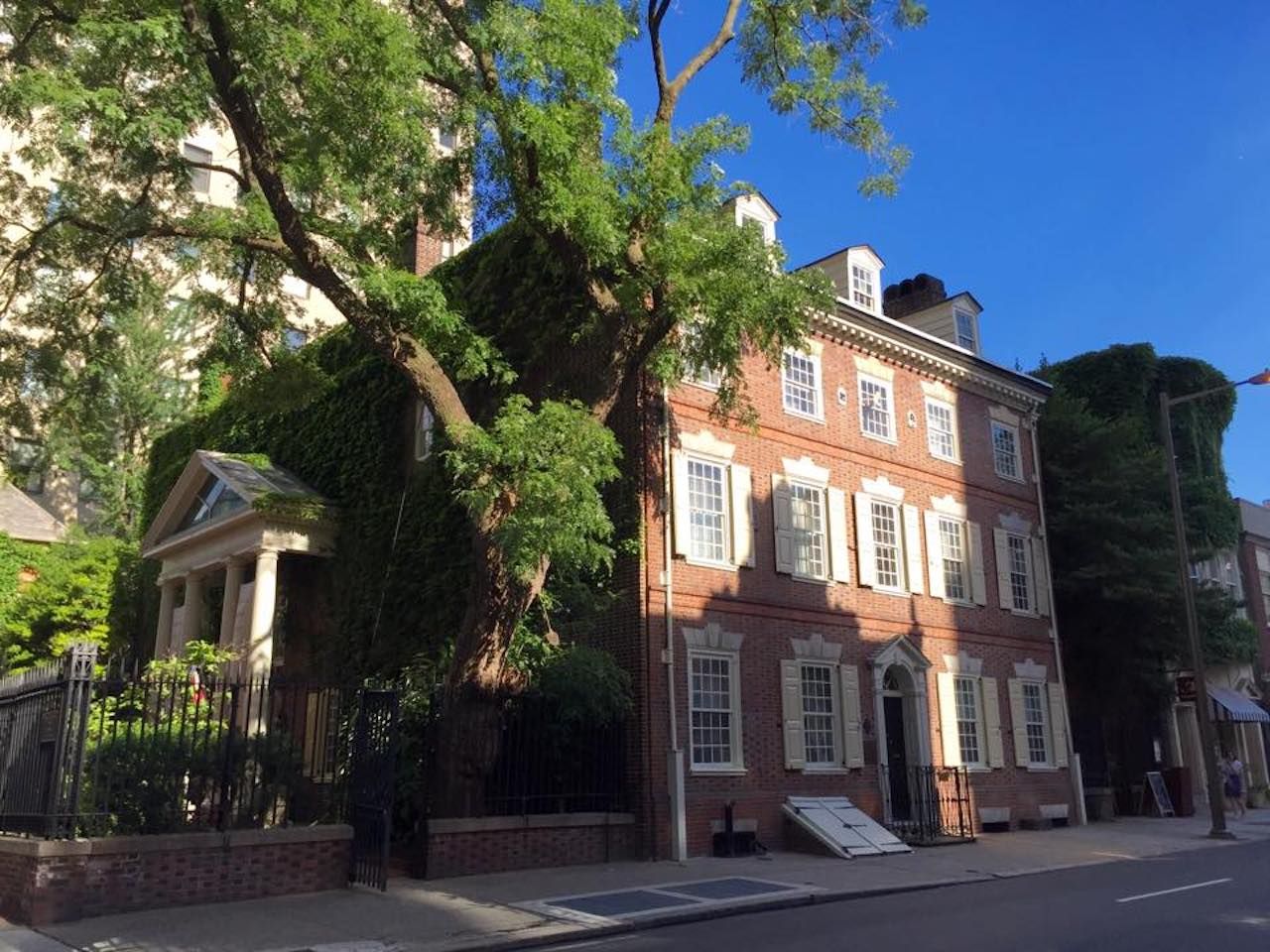 Morris House — At first glance, this colonial-style mansion looks like just another one of Philadelphia’s many historic buildings. And while Morris House is a National Historic Landmark, it’s also an old-fashioned hotel that doesn’t skip on modern comforts. Every morning, the cozy Revolutionary-era lounge serves fresh tea, coffee, and cookies to guests. Morris House also has a scenic garden view of the surrounding Washington Square Park, perfect for anyone who needs a little nature during their city vacation. 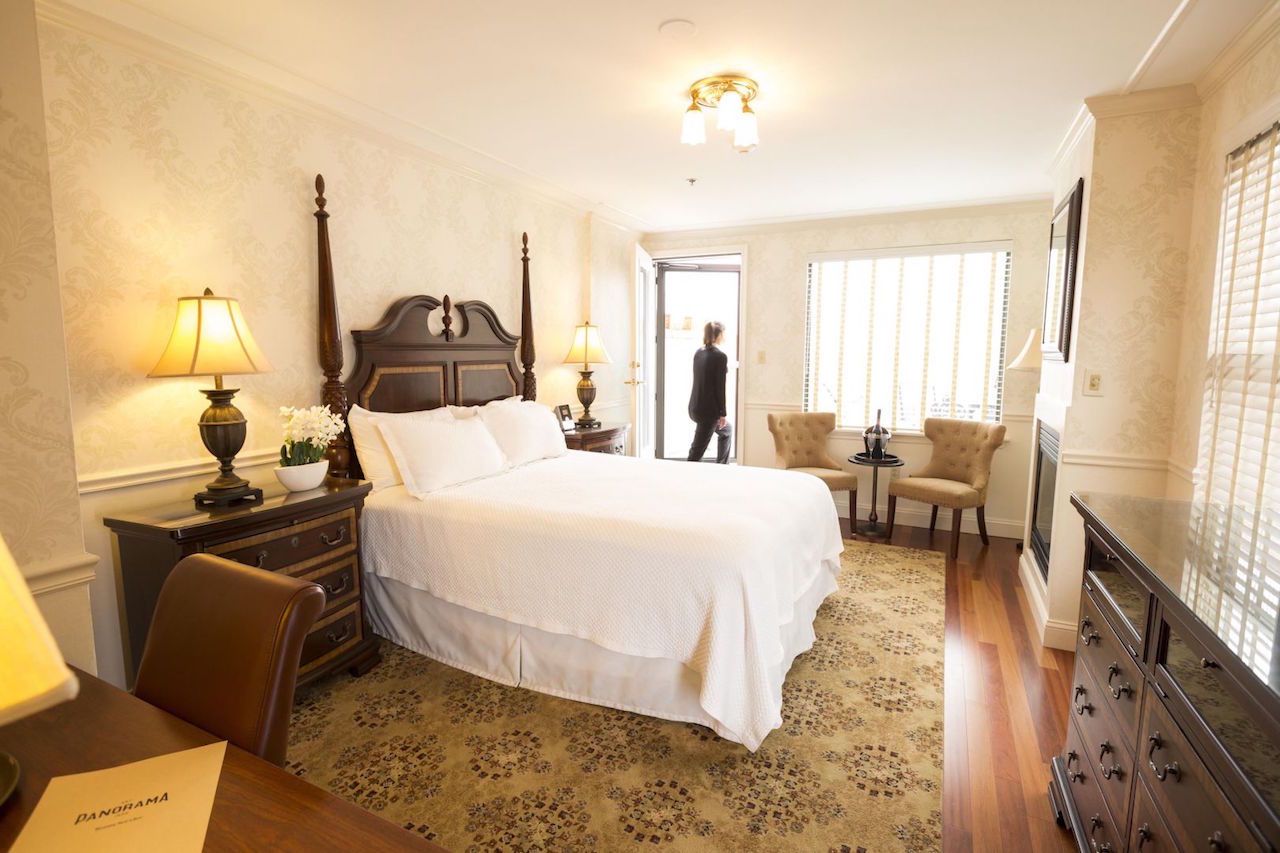 Penn’s View — This boutique hotel is located in the heart of Old City, within walking distance of the city’s most famous landmarks. Penn’s View uses a colonial aesthetic that matches the neighborhood, with a lot of red brick walls and intricate designs. Their amenities include private balconies and fireplaces, spa tubs, a gym, and the Panorama Italian restaurant. 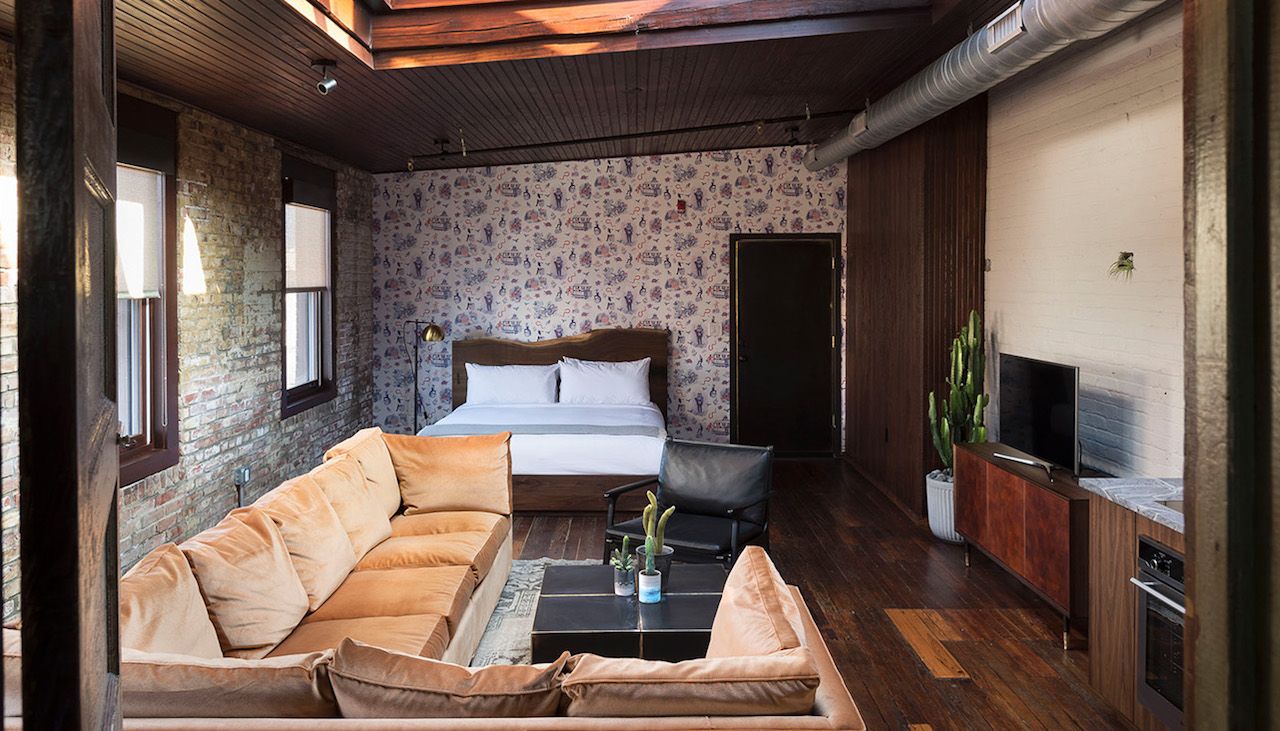 William Mulherin’s Sons Hotel — Once a whiskey distillery, it’s now a four-room hotel in trendy Fishtown. It’s away from more crowded areas like Center City and Old City, in a neighborhood known for having some of the hottest new restaurants and bars. Mulherin’s has a one-of-a-kind, vintage style, decorated with handcrafted furniture, potted plants, and throwbacks like vinyl record players.

The Bellevue Hotel — For over a century, the Bellevue Hotel was known as the Philadelphia luxury hotel. Although it’s now managed by Hyatt, it’s still known by its historic name and reputation. Since opening in 1904, it has hosted presidents, royalty, and movie stars. The 19-story hotel is located on Walnut and Broad Street (aka “The Avenue of the Arts”) right in the middle of downtown Philadelphia. 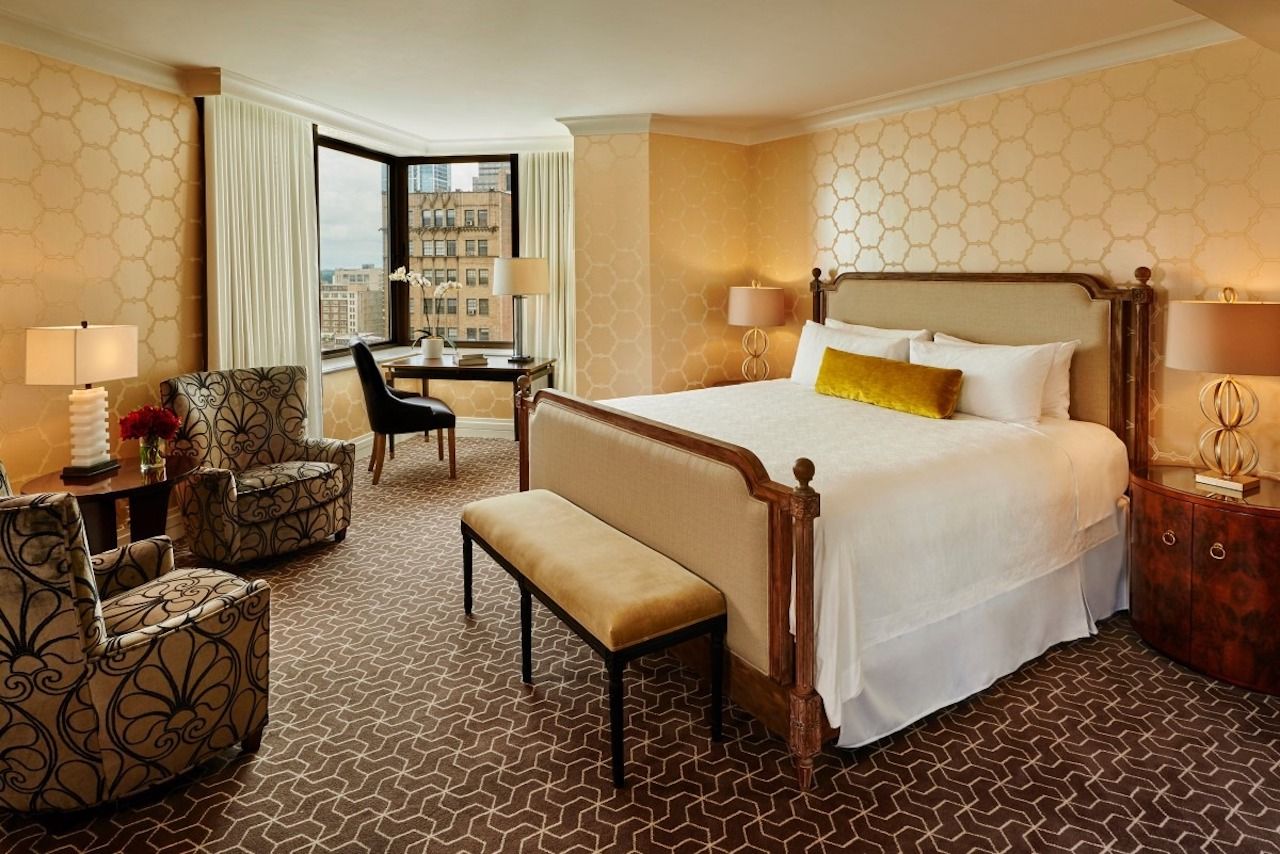 Rittenhouse Hotel — The view makes the Rittenhouse Hotel stand out. The luxury hotel is right across the street from Rittenhouse Square Park, so the natural beauty of the park and the downtown skyline are right outside your window. This Forbes four-star hotel has a choice of finely decorated suites that come with four-poster beds, marble bathrooms, and an indoor pool. 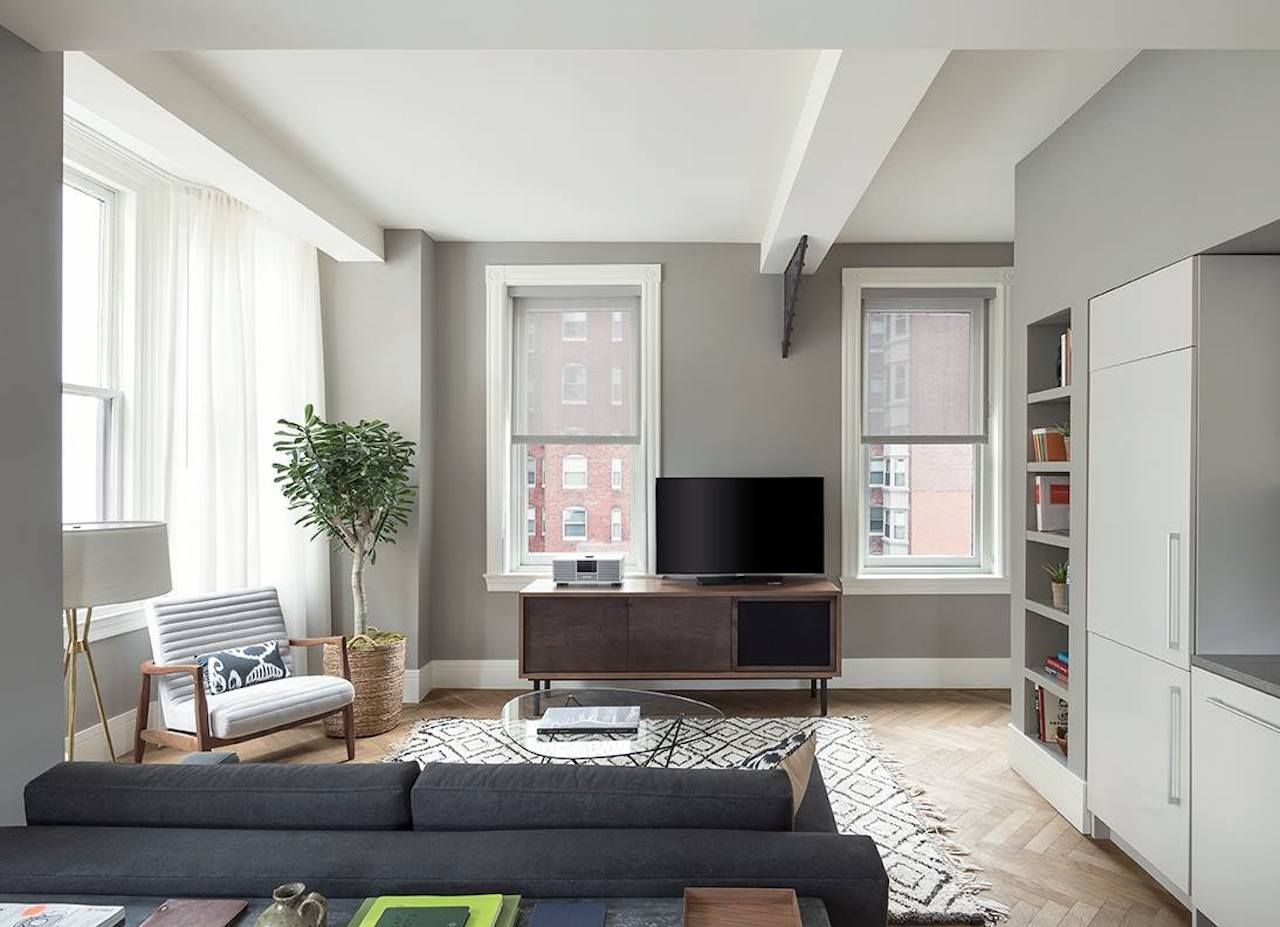 ROOST Rittenhouse — ROOST, located on the edge of Rittenhouse Square Park, is a boutique hotel that resembles a luxurious downtown apartment. Studios, one- to two- bedrooms, and penthouse options are available, which include king-sized beds, full kitchens, and a 24-hour help desk. There are quite a few perks, like a dog walking service (ROOST welcomes animal lovers who don’t want to leave their fur babies behind) and a bicycle-sharing program. 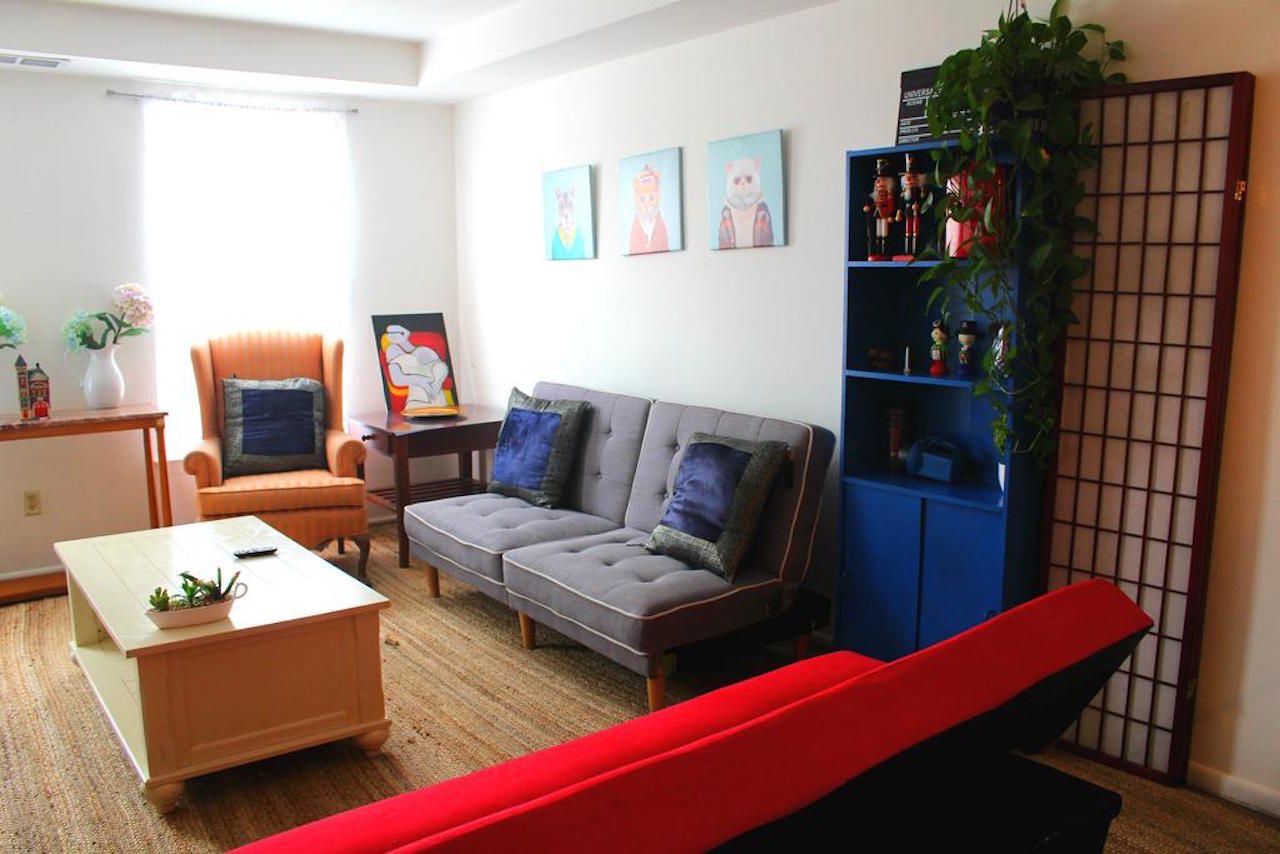 Artist in the Barn — This hostel looks and feels like your own trendy apartment, filled with decorations like cat portraits and nutcrackers. It’s furnished with all of the necessary home comforts, like a dishwasher, microwave, and coffee maker, so you won’t have to do without. Artist in the Barn is in University City, near college campuses and the airport, close to many popular attractions without being too crowded. 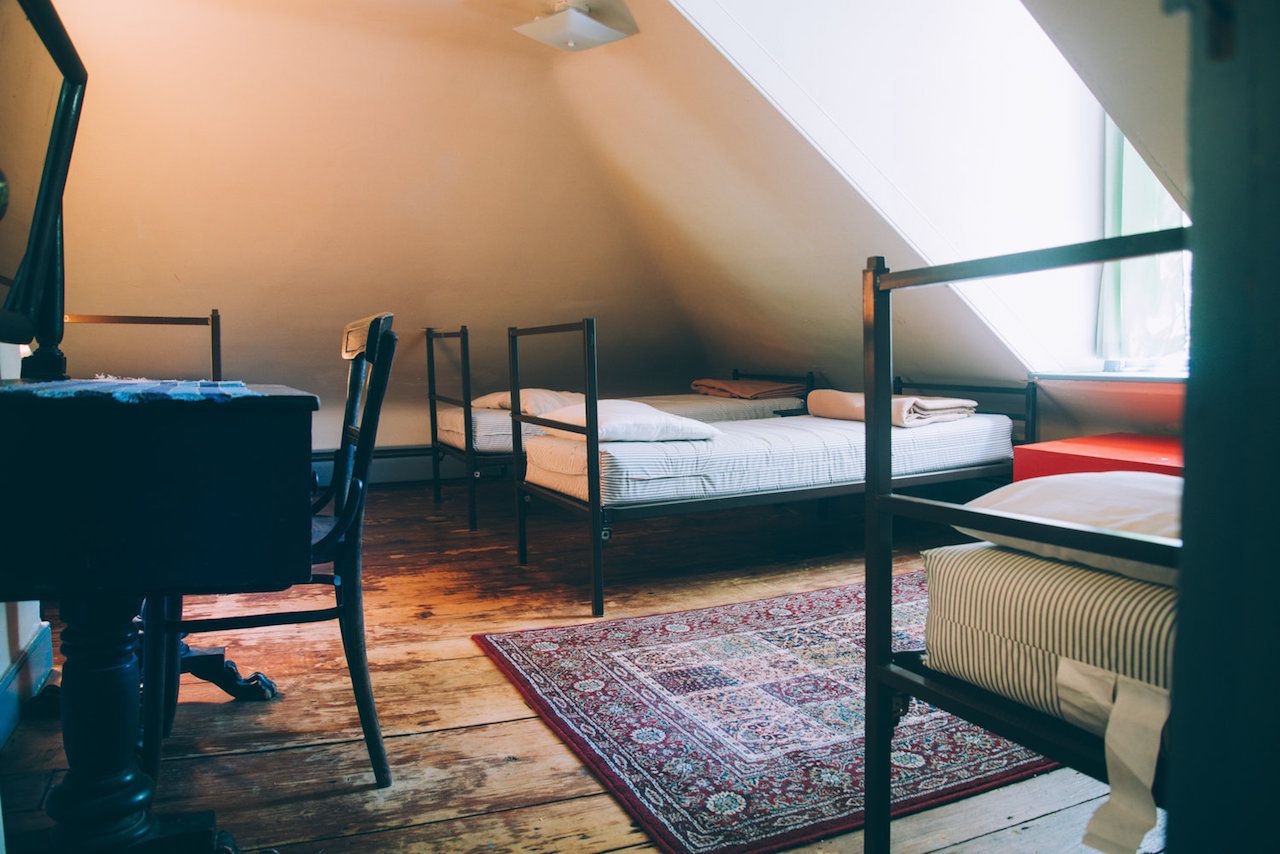 Hi Chamounix Mansion — Hi Chamounix is an old mansion in Fairmount Park, surrounded by woods and gardens, near the Schuylkill River and Art Museum. The mansion’s guests have daily do-it-yourself pancake breakfasts, a bike lending program, a library, and a ton of outdoor activities like tennis, volleyball, and Frisbee. The staff actively encourages guests to get out and explore the city with mandatory lockout periods from 11:00 AM to 4:30 PM. 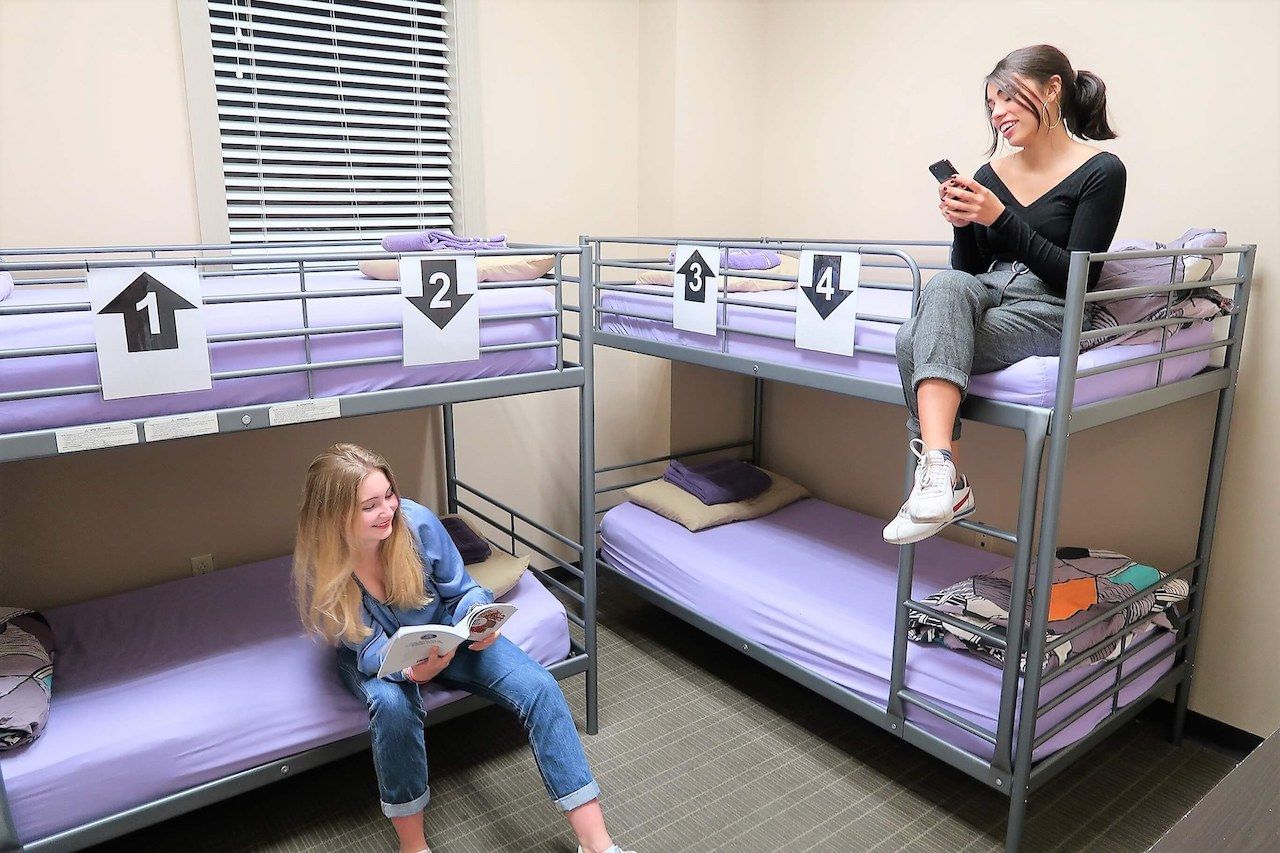 City House Hostel Philadelphia Liberty — City House is one of the closest hostels to popular tourist destinations like the Liberty Bell and Penn’s Landing. The environment here is friendly and welcoming; chill-out areas can help you meet new friends, and there’s plenty of group events like karaoke, movie nights, and salsa lessons. It’s shoe-free, so make sure you pack a pair of slippers. 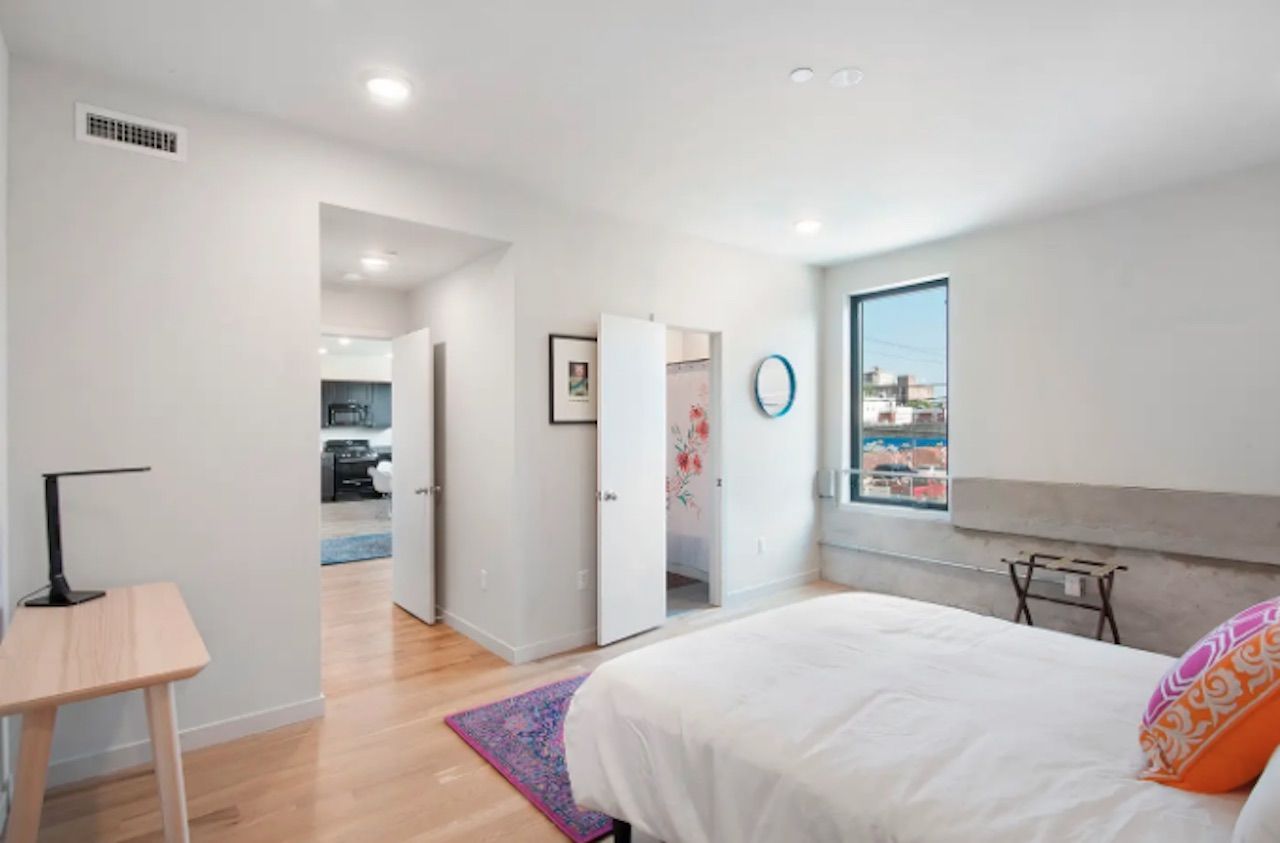 Fishtown textile factory loft — This loft in up-and-coming Fishtown has a minimalistic feel — which makes sense since it was once an industrial-era textile factory. It also has a renovated kitchen and smart TV, so you won’t go without modern touches during your stay. All artwork in the loft was designed by local artists. 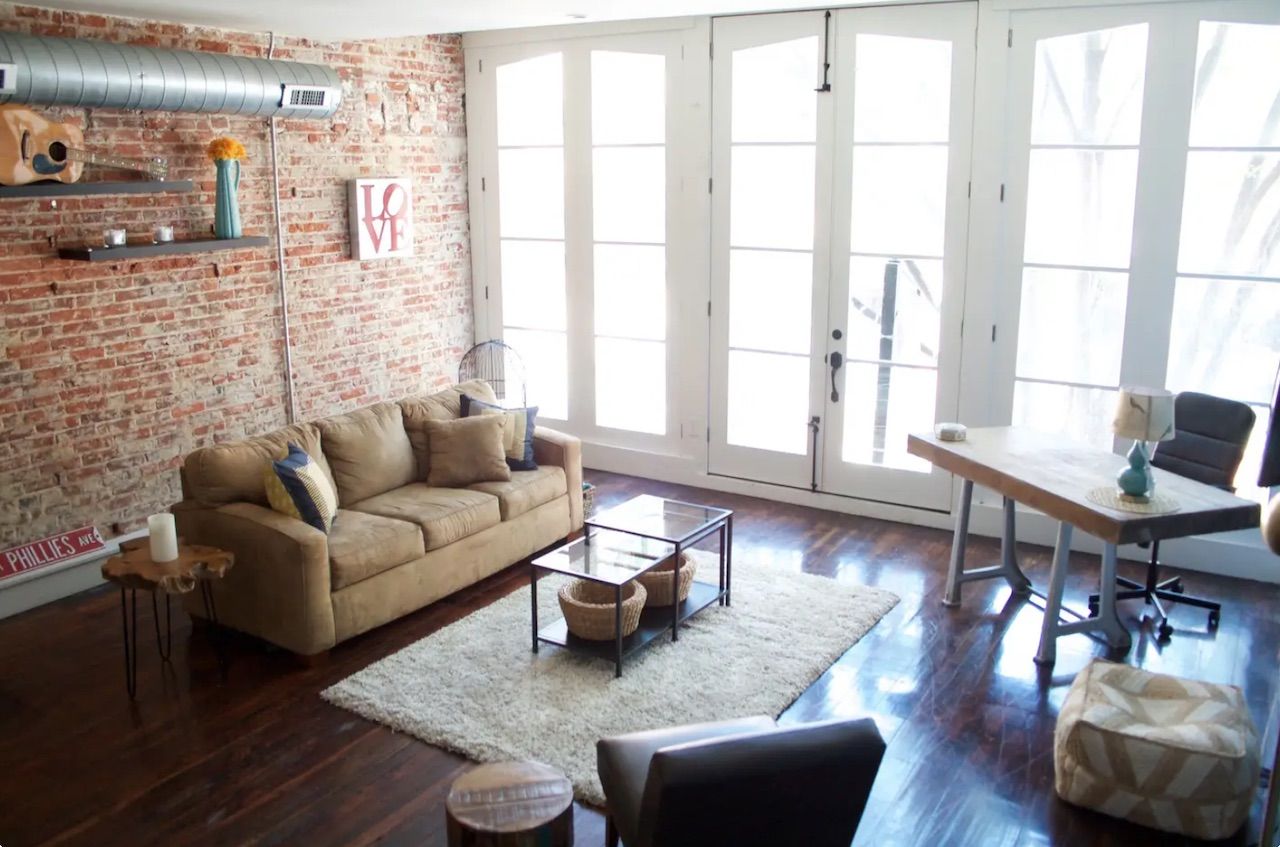 Old city apartment — Located in Old City, surrounded by beautiful buildings and historic sites, this apartment is perfect for history lovers who want to experience one of the oldest neighborhoods in America. It has two bedrooms and two baths, so there’s enough space without feeling cramped, and the recently renovated apartment has plenty of natural light to create a happy and energetic atmosphere. 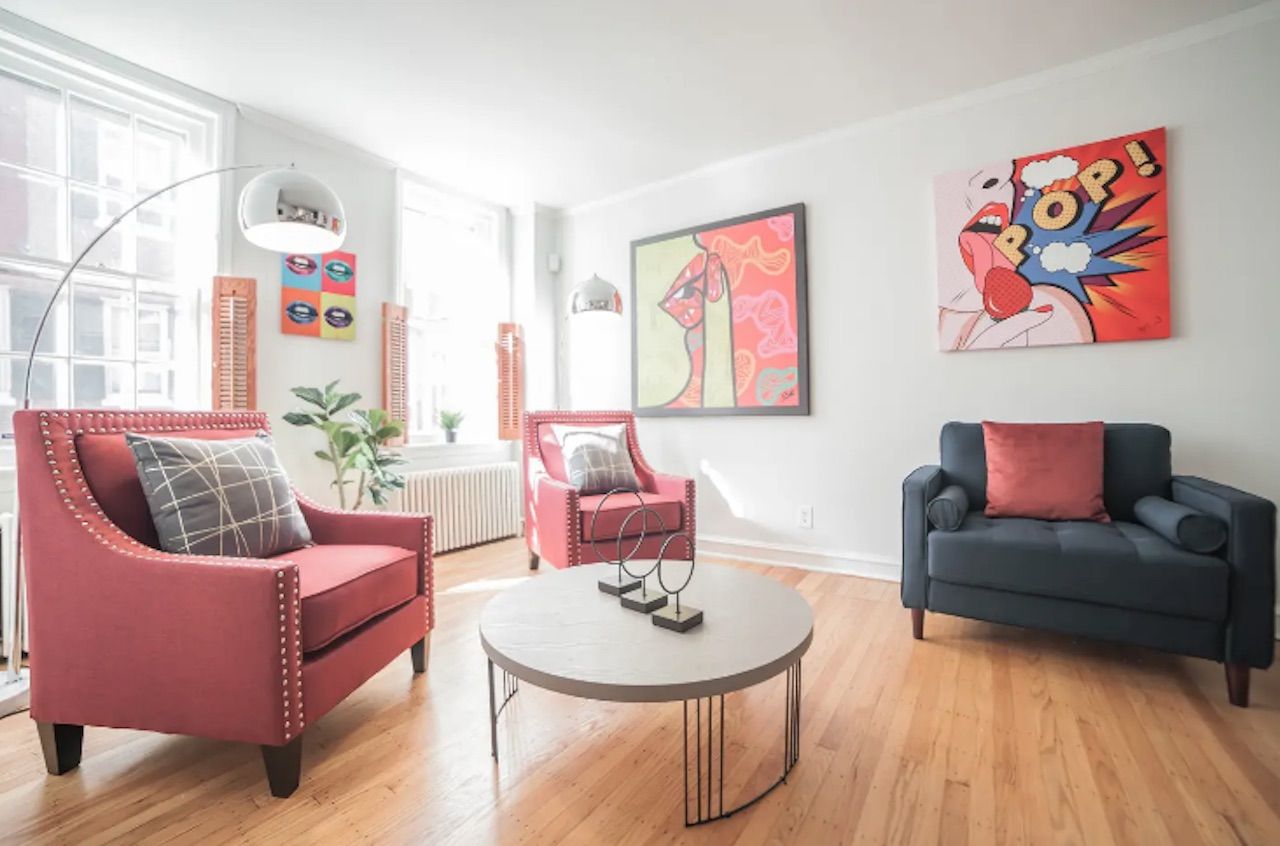 Apartment on Rittenhouse Square — This is an ideal place for anyone who wants to be in the heart of downtown Philadelphia. Located in beautiful Rittenhouse Square, it’s within walking distance of the city’s top attractions. The apartment is stylish, comfortable, and affordable at $45 a night.