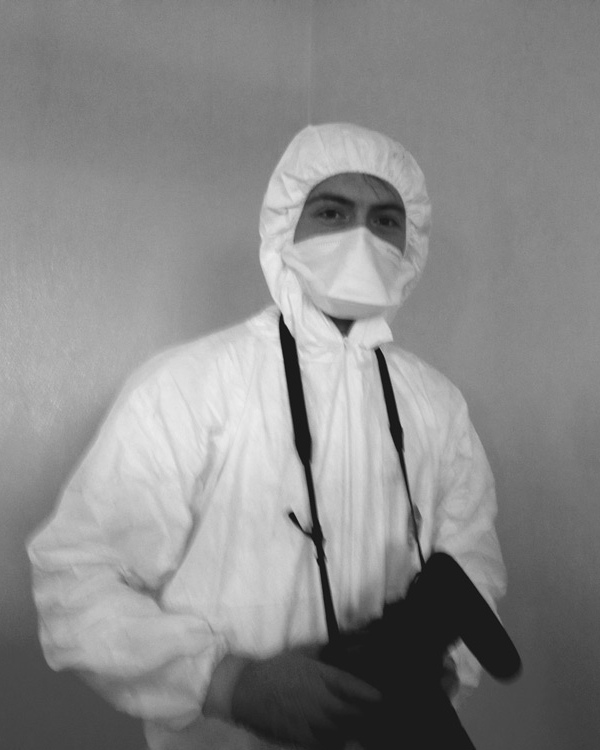 “I am a video journalist currently based in West Africa. I grew up in Sheffield in the UK but I don’t think I have stayed in the same place longer than six months since I left school.

Over the past four years I have worked as a filmmaker and photographer in countries such as Ukraine, Sierra Leone, Liberia, Lebanon, South Africa, and Europe. I regularly produce work for TV and online news. Most recently I’ve been covering the Ebola outbreak in Sierra Leone West Africa.” My everyday DSLR bag for shooting video and stills

1. G3 wireless mics — especially if it’s a busy or noisy place
2. Think tank card case — not waterproof but it holds lots of cards and is small enough to fit in my pocket
3. Zoom H4 — for my lapel mic so I can monitor and record sound separately
4. 5D MK ii + 35mm F2 IS. + small black strap of an old Nikon — IS or image stabilization is perfect for hand-held video
5. 24-105 F4 IS — my number one lens
6. Zacuto z finder + eye cushion — for bright sunlight and the cushion stops sweat when its hot
7. Rode shotgun video mic and windshield
8. Moleskin notepad — I have a stack of them but this little one lives in my camera bag
9. Alcohol-based hand sanitizer — I use about a bottle a day at the moment and I rub it on my hands, arms as well as my gear
10. Loads of spare batteries — sometimes it can be a few days between charges
11. Pens + sharpie — so I can write on anything anytime
12. Rocket lens blower for sand and dust
13. iPhone car charger + In ear headphones — quality is great and easy to replace
14. Dry bag and Domke shoulder bag — stops cameras from getting wet when there’s a downpour
15. Face mask (not pictured) — I use it when close to bodies, but only because there so much chlorine spray in the air When I shoot for news

1. Three meter XLR cable — small enough so it doesn’t get in the way, but quick and perfect length if I want to take it off my camera to get closer to subjects
2. Canon Xf100 tiny broadcast-quality camera
3. Rode NTG1 shotgun mic + windshield — durable and excellent quality
4. Soft bag for batteries or spare cables
5. iPhone battery case — gives me an extra day between charges and also offers great protection
6. A really good set of headphones — two channels for if I’m running multiple sound
7. Everywhere, green and orange tape — I use it to mark, label and repair my kit
8. Batteries — enough but not too many
9. Think tank card reader + lots of CF cards 4x32GB, 2x16GB
10. Always keep a coin for swapping base plates What I carry in my pockets Red Cross (IRC) burial teams workers stare at bodies in back of an ambulance. Only half are loaded. A lack of resources means that many bodies have to be transported at the same time. Kailahun, Sierra Leone.

Tagged
Travel Sierra Leone Ambassadors
What did you think of this story?
Meh
Good
Awesome