ANDREW STANBRIDGE has been traveling and photographing throughout Southeast Asia for the past 15 years. His first work documented the continuing modernization of Thailand, Laos, and Cambodia, a theme he returns to frequently. While traveling through these countries (particularly Cambodia and Laos), his interest was piqued by the histories of conflict that his own home country of America had been involved in, and the recovery from the aftermath of these conflicts.

For the past 5 years he has concentrated on this theme by addressing the physical, emotional, and cultural scars left from the various wars fought in these countries. He has spent time clearing and photographing unexploded ordnance, gone on patrol with ragtag armies, and spent countless hours hearing the stories of those whose lives have been affected by the vestiges of war. These people include sex workers, rice farmers, politicians, and others whose stories beg to be told, but who have been overlooked by the mainstream media, who too often forget the stories of rehabilitation and instead focus on the next hotbed of wherever blood and guts are being spilled. He has also begun to make forays into the African continent to photograph post-colonial communities on the islands of Sao Tome and Principe, as well as create a visual survey of Ethiopia beyond the well-known images of drought and starvation. 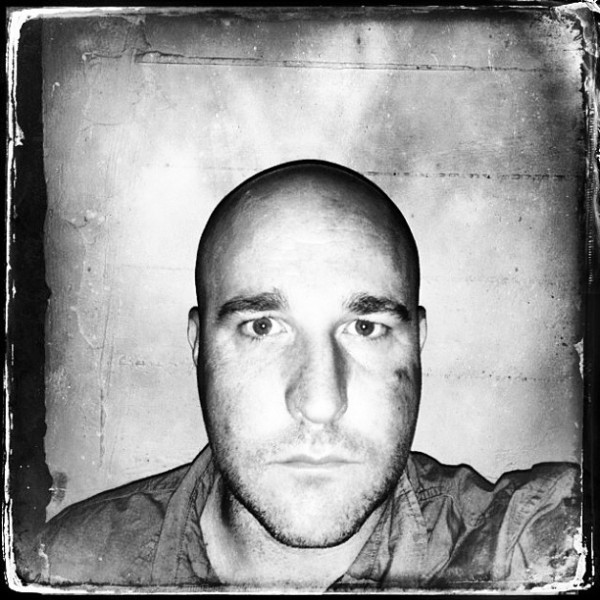 Although he would not call himself a conflict photographer, he has brought his camera into areas where bullets are flying and bombs are falling. Recently, this kind of experience has involved image making in Syria. His work has also followed Burma through its dark history and into the recent “democratization,” and this year he has concentrated on the religious tensions developing in various corners of the country, photographing those who are affected by the conflicts.

Stanbridge is a collector at heart and looks at his photographs as the big things he can’t fit in his suitcase. He also enjoys returning to the studio to print and handwork the images, allowing him to devote more time to the situations he encounters. His work has been exhibited and published internationally and is held in several prominent collections. It has been supported by many grants, and he frequently visits colleges and universities in America lecturing on the aftermath of war. He holds a Master of Fine Arts from the School of the Museum of Fine Arts, Boston and Tufts University.

He was recently documenting the ongoing violence between Buddhists and Muslims in Myanmar, focusing on those who have been displaced by the conflict. For more information and images please visit www.andrewstanbridge.com.

1. Scarf – Um, sometimes you just need one of these to joke around with and say in a douchey voice, “I’m a photojournalist.” Other times these things are a serious bit of gear, from padding equipment to dust storms to keeping warm to using as a piece of triage equipment, etc. My bag rarely doesn’t have one in it.

2. Bandana – Or sweat rag as I usually refer to it. Also can be used for sun protection on my bald head.

3. Waterproof Outdoor Research stuff sack – I shoot in a lot of monsoon environments and this is great for throwing over my camera body when I’m not shooting.

4. Power inverter – Power out or on assignment in a Land Rover out in the bush? Here’s your power source — just plug into a cigarette lighter and you are good to go.

11. Canon 5D Mark III – I also have a backup Mark II that I leave at the hotel. Sometimes it comes with me if the assignment requires it, but I would usually rather travel lighter.

12. Lucky talisman – Helps me shoot and helps me stay alive. Don’t ask me how.

13. 115 lumen flashlight – Man, the power they pack into small flashlights these days is incredible. And I love the fact that LEDs don’t screw with white balance too much, so you can light a scene with it if need be.

16. Tourniquet – I have two better ones in my med kit, but this one is always in my camera bag. Even if I’m not in a conflict area, there could be a bus crash or a drunken jump off a balcony that warrants it.

17. Knife – For defense or just to slice some cheese for lunch, this is a mainstay.

18. Micro multitool – Those big multitools are too heavy, but this has the essentials for repairs, medical stuff, etc. 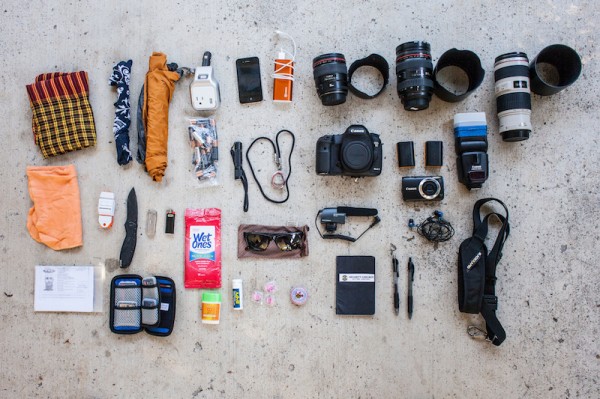 19. Lighter – Make friends with a rebel lighting their cigarette or make a fire at night in the bush.

22. Sennheiser MKE 400 shotgun mic – I’m not a big fan of shooting video, but when I do sound is important.

23. Earphones – For shooting video or sitting on a bus.

24. BlackRapid Camera strap – I don’t always like having a strap on my camera, so have really been liking this BlackRapid strap that clips onto the bottom of my camera.

25. Pens and notebook – You have to put the facts somewhere, not to mention phone numbers you may pick up along the way.

26. White Monkey Holding Peach Balm – ESSENTIAL. This stuff is great for keeping cool, insect bites, and muscle aches to name a few. I even saw this stuff save an old woman’s life in Cambodia one time, but that is a story for another day.

27. Pepto Bismol tablets – I eat a lot of weird shit. Sometimes it doesn’t turn out so well.

28. Advil – Could have been a long one the night before or a twisted ankle.

29. Yaa dom – This is for sniffing. Great for around dead bodies, smelly buses, or just to enjoy. It also says it cures dizziness on it, but I have yet to try it on that.

Tagged
Travel Myanmar Ambassadors
What did you think of this story?
Meh
Good
Awesome
✖
travelstoke
Download the mobile app
stoked by