The Frontline Freelance Register (FFR) is a representative body for freelancers, created and run by freelancers. It is an independent, ring-fenced entity which sits within the Frontline Club Charitable Trust with membership open to all freelance journalists working in conflict or foreign reporting. The FFR’s core objective is to support the physical and mental well-being of freelance journalists. In a world where staff jobs and fully paid foreign assignments are increasingly scarce, foreign and war reporting is dominated by freelancers, many of whom are deeply committed professionals doing outstanding work. At the same time, many of these freelancers lack the institutional support and the financial means to adequately manage the challenges of operating in dangerous environments in the long term. They also lack organised representation, often leaving them at the mercy of powerful media groups. FFR aims to help freelancers by providing them with a forum, a representative body, and a critical mass to face some of these challenges.

Matador is teaming up with FFR to show you what conflict and foreign freelancers carry with them on assignments.

Emma Beals is a New Zealand-born, London-based independent journalist with an interest in conflict and social affairs. She currently has her eyes firmly on Syria. This month she was in the northern Syrian city of Aleppo reporting on women, Kurdish militant groups, and the ongoing conflict in the country. 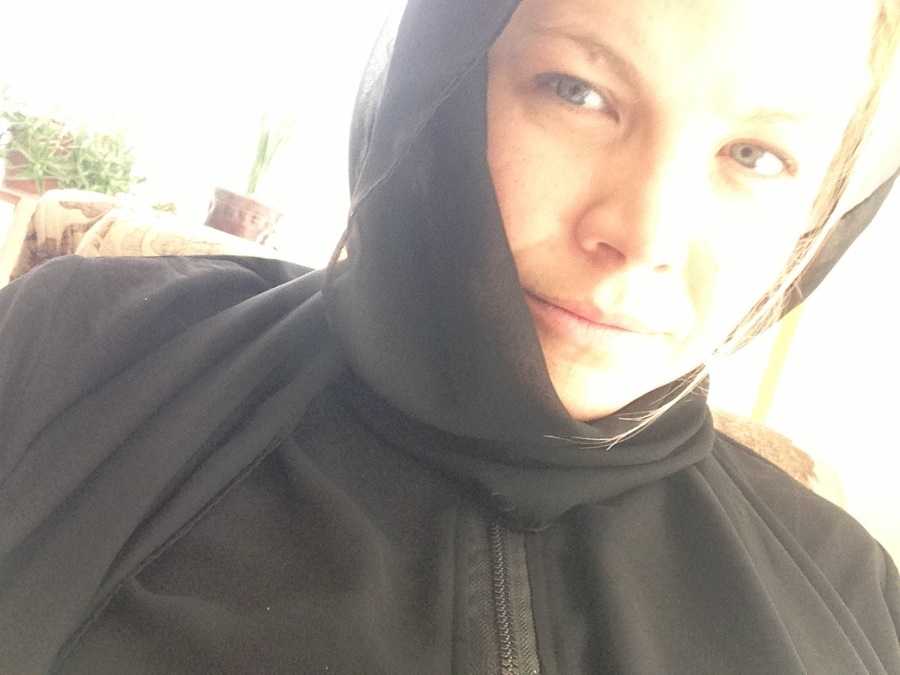 Koolertron camera bag – When travelling I carry this Koolertron because it looks like an old calico bag. It’s not a foolproof plan, but it doesn’t advertise the contents too much. I pack everything in and travel as light as I can, although the kit doesn’t leave much room and it’s changes of clothes that suffer — or the people sitting next to me at the end of a trip!

Jungle Deet – Northern Syria is home to a disease called Leishmaniasis. It’s so common in the area it’s often called “Aleppo Button Disease,” and the number of cases is on the rise in the war-torn country. It’s caused by parasites transmitted by sandflies, and prevention is better than cure as infection is characterized by large sores on the skin, which frequently scar. Jungle Deet is a must.

Energy shots – Fasting during the long, hot days of Ramadan in an abaya and hijab is no joke, especially if you need to work. In a trick learnt from long-distance running, I find carrying gels means you’ve always got a discreet hit of glucose on hand to give you an energy boost.

Flak jacket and Level IV plates and ballistic helmet – A concealable bulletproof vest with high-level ceramic plate protection is essential in Syria. Can withstand fire from an AK47 or Kalashnikov rifle, most fighters’ weapons of choice. The plates weigh nearly 3kg each, so you sure know you’ve got them. Press are now targeted in Syria, so negotiating when to wear the vest and helmet is becoming more and more difficult.

Canon 5d mkii, Sigma 17-70 f/2.8-4, and Canon BG-E6 battery grip – I love the colour profile of the 5d. While I’m no photographer, in the world of online news I’m often asked for images to go with my stories, and the Canon certainly makes this amateur photographer look a whole lot better.

Sennheiser headphones – I’m never without a decent set of headphones. I’ve fallen in love with the HD 201s mostly because they have Sennheiser-quality sound at a price I can afford to replace when I inevitably bust them up or leave them somewhere.

Trauma medical kit – A friend made me up this pack based on a personal military trauma first-aid kit. Being part of FFR, we all sign up to carry the medical kits needed to save our colleagues and friends, and we work with an excellent organisation called RISC, set up by Sebastian Junger to train freelancers in trauma first aid. 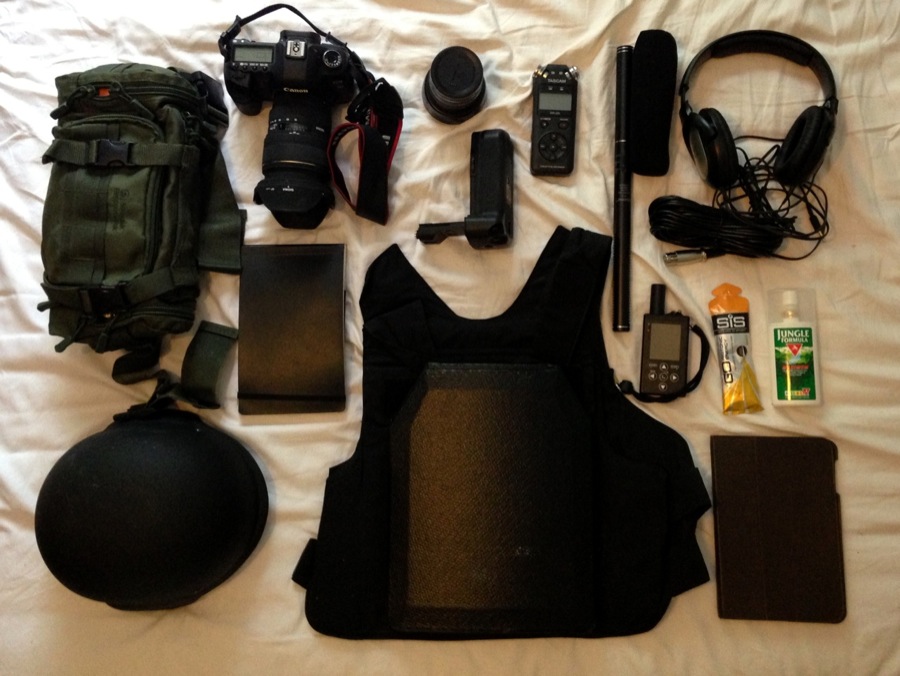 The contents of Emma’s bag

iPad mini – A gift from a family member, my iPad mini comes everywhere with me. Its well-worn leather case passes as a scrappy reporter’s notebook. For Syria it’s reset to factory settings. My MacBook, iPhone, and hard-drives are left with the rest of my stuff with a friend on the border, ready to use on my return.

Moleskine reporter notebook – A classic, but like most classics it has earned its place. Hard wearing and convenient, my Moleskine comes everywhere. I keep copies of my work and my press card in the pocket to prove I’m a reporter if I need to.

Iridium Nano shout satellite tracker – There’s one thing you notice when you enter Syria — the feeling of ‘going down the rabbit hole.’ Unlike most other countries, even those in dire trouble, there is simply nobody there — no UN, no Red Cross, no police or government or order. Electricity is sparse, meaning the internet connection, when you can find it, is patchy, and communicating with the outside world is difficult. Kidnapping is also high, so I check in frequently with a colleague using this small, concealable satellite device.

Tascam DR-05 handheld digital audio recorder and TIMETOP shotgun microphone mic – Years ago I worked in radio and I’m returning to this early love, recording the sounds of war and working on a long-term project for radio.