MANY OF US HAVE HEARD OF BANKSY only within the last few years as he has transcended into worldwide notoriety and infamy. We have seen the stencils and heard the name, yet the man himself remains a mystery.

Not much is known about Banksy outside of his work. In the midst of rumors, journalists and art aficionados have produced little verifiable concrete background information about the underground British artist.

UK’s Daily Mail published an article last summer, claiming to have uncovered Banksy’s true identity, although at the very end they concede that their whole discovery could be bunk.

The most commonly accepted facts are: his hometown is Bristol, UK; He was born in or around 1974; and his involvement with graffiti art began in the early 1990s.

In interviews granted to various media outlets, mostly anonymously, Banksy talks about his background only in relation to his work.

Having always been interested in art, Banksy started graffiti when he was just 14 years old. He gravitated toward stencil art because it was quick while still allowing him to do aesthetic, detailed work.

“If you damage someone’s property it’s good to show some dedication to it. [To] just slop it up is a bit rude, I fear.”

Having never been a fan of school, Banksy, instead, found his place and identity within the underground graffiti culture. Since picking up a spray can and stencils, the artist hasn’t looked back. 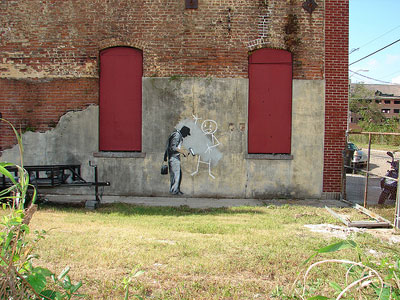 Regardless if you’re a fan or a member of Keep Britain Tidy (a group that believes Banksy’s work is criminal vandalism) you immediately recognize a Banksy when you see it.

Starting in the early 2000s, Banksy began to extend past Britain and work all over the world. From the Guantanamo prisoner in Disneyland to the sprayed art on Israel’s West Bank wall, Banksy’s art has covered the globe, uniting all sorts of people in his fan base. Currently, fans include some of Hollywood’s most famous stars, though in all likelihood Banksy wouldn’t brag about that.

What probably makes Banksy most notorious, however, is not just the message, but the overtly mischievous and humorous style evident in his work. 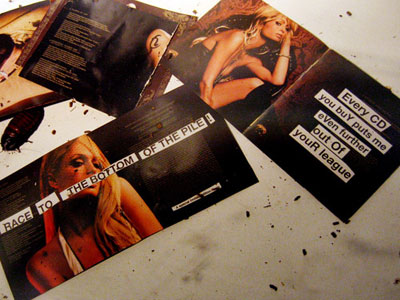 A few years ago, Banksy added his own prehistoric piece to the walls of the British Museum, mimicking cave art style and depicting a man with a shopping cart chasing a buffalo. The statement “This finely preserved example of primitive art dates from the Post-Catatonic era,” was in the sign hung beneath.

He once snuck into the London Zoo, spray painting the message “I want out. This place is too cold. Keeper smells. Boring, boring, boring.” in the elephant pen.

When Paris Hilton came out with her debut music CD, Banksy replaced 500 original copies with his own doctored CDs across 48 UK record stores. He Photoshopped the cover art to replace her face with that of a dog’s and added titles such as, “Why Am I Famous?” and “What Am I For?”.

In response to his increasing notoriety, Banksy offered for sale a painting of an art auction with the sentence, “I can’t believe you morons actually buy this shit.” 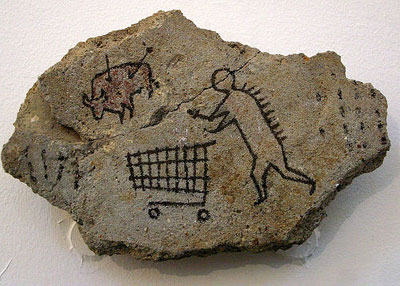 A little less playful and a lot more disenchanted, Banksy has told The New Yorker’s Lauren Collins “I originally set out to try and save the world, but now I’m not sure I like it enough.”

He’s admitted that his infamy and the fact that just one of his pieces fetches hundreds of thousands of dollars makes him uncomfortable.

But this doesn’t mean he’ll retire from art activism. Just late last summer, he tagged several buildings in New Orleans to commemorate the third anniversary of Hurricane Katrina. Hopefully, for his fans around the world, he’ll never stop working.

You can visit Banksy’s official website at www.banksy.co.uk. Original prints can be found at lazinc.com and are sold through his agent’s gallery in Soho, London.