When my friend Sarah texted me shortly after the election, asking if I’d join her on a bus that was heading from Mount Desert Island, Maine to the Women’s March in Washington, DC, I didn’t want to go. I’m in the middle of building a house, money’s tight, and I’ve never been able to sleep in a small, cramped space. I ignored her text for a few hours.

Then, it hit me. I’m a feminist. I disagree with the racism, misogyny, and bigotry that was displayed throughout the election. And ever since I awoke to the struggles of others while in college, I’ve tried to be active in resistance. I’ve attended small protests for marriage equality, reproductive justice, and climate change awareness — but when have I ever taken my beliefs to our nation’s capital, alongside hundreds of thousands of other people? This was an experience that I couldn’t let go just because I didn’t want to spend two nights sleeping in the fetal position on a 34-hour round trip bus ride.

So I paid the 140 bucks and reserved a seat, hoping to be part of something that future generations might read about in history books.

Nothing could have prepared me for what I experienced in D.C.

I grew up in Waldo County, Maine in the same town that my mother grew up in. My grandmother grew up nearby as well. I’m proud of my roots, but I’d be lying if I claimed they were very diverse. The narratives I’ve been exposed to are, for the most part, those of poor white people. What was it like to grow up in small town Maine in the ‘60s and ‘70s without access to reproductive healthcare, where your only sense of community comes from a church that tells women their bodies aren’t their own? Ask my mother. What was it like to grow up in Maine’s most impoverished area where the only dependable job is raking blueberries, constructing wreaths, or digging for worms? Ask my boyfriend. What is it like to watch elementary schools and small businesses close down in your community? To watch historical buildings rot into the ground? To no longer be able to afford health insurance because Medicare wasn’t expanded in your state? Ask my neighbors. What is it like to drive an hour for an OBGYN checkup, only to pass by protesters holding grotesque signs, shouting at you? Ask me. Ask my sister. Ask any one of my girlfriends.

These are the struggles that the people in my life have had to face, and they’ve certainly been difficult, but they aren’t representative of every hardship that’s out there. If there’s anything that I’ve learned from being a millennial woman, it’s that I’ve got a lot to find out about other people. And the privilege of growing up in the technological age is access — access to different points of view.

At the Women’s March on Washington, I was swept into an ocean of diverse viewpoints. I wasn’t reading an article online anymore, written by a woman of color, I was marching alongside her. I spoke with a senior woman from Baltimore who said that if she could speak to my generation, she would say: “You all have a voice in whatever way you choose to express it. Keep on fighting.”

I spoke to a woman in a head covering from Connecticut, who told me that even though she donates to Planned Parenthood every year, is a member of the ACLU, and has attended D.C. marches of this size before, her biggest form of activism is raising her three children to be good people.

I marched alongside a woman from New York City, a millennial too, who told me terminating a pregnancy at 19 was the best decision she has ever made. She’s now a lead person at the National Network of Abortion Funds and has devoted her work to getting stories like hers out into the public. “Abortion is a human right,” she said. “So we will resist.”

I asked a young Latina woman, much younger than I, if she would pose for a picture. She stood proudly, holding a sign that read: “Latinas. Mis padres no crusaron la frontera, la frontera cruzó a mis padres.” Translation: “My parents didn’t cross the border, the border crossed them.” 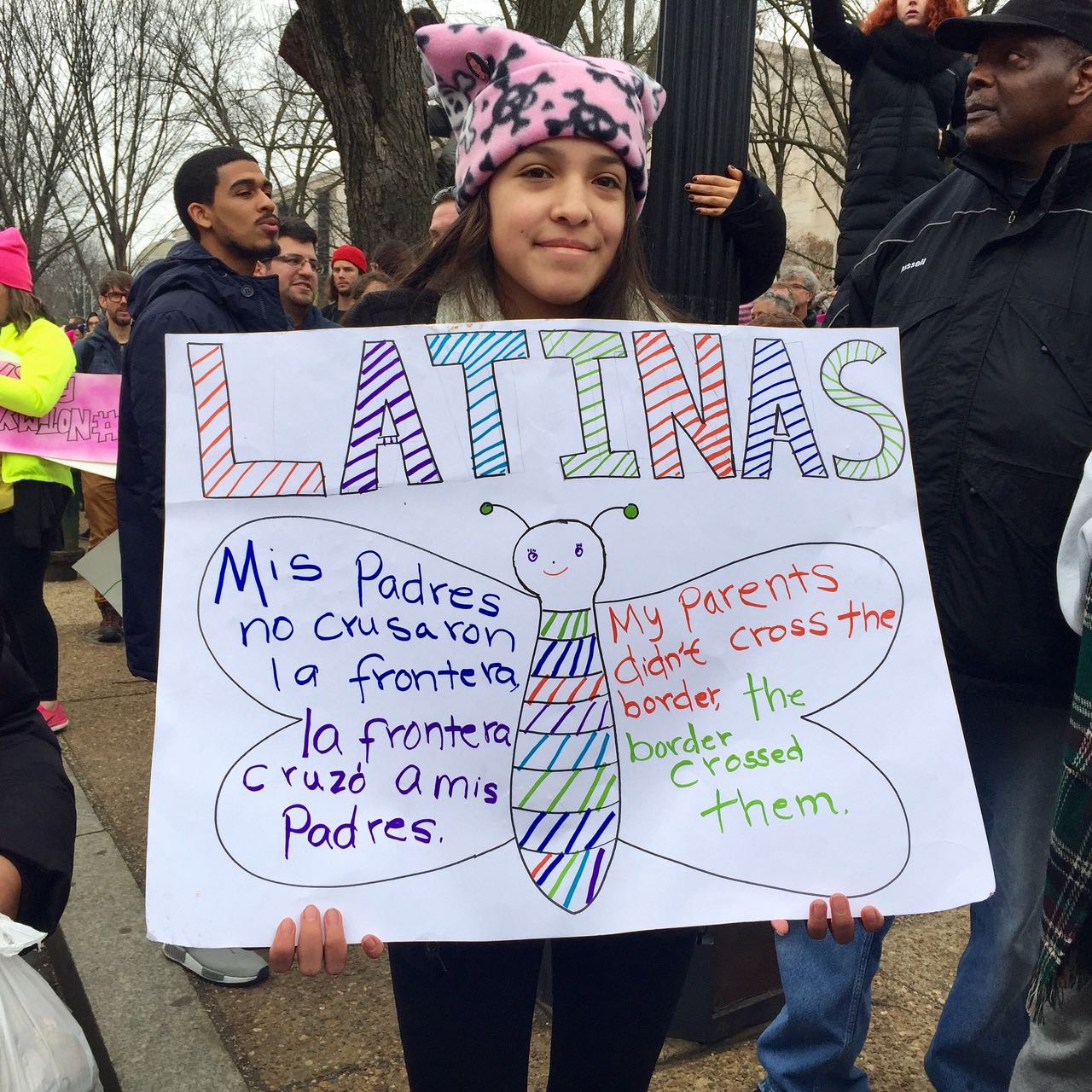 On the way to D.C., Sarah said someone back home had told her not to waste her time or money traveling to the march, he didn’t believe it was going to accomplish anything. If the Women’s March on Washington was successful in just a single goal, it was bringing more than one million people of diverse backgrounds together in one place. And I believe that it set the tone for the multicultural, intersectional feminism that my generation will come to be known for.

When I returned home, I returned empowered, but with a little frustration and a little guilt as well. I disagreed with so much that was said during the election — the hatred toward immigrants, the normalizing of racism, the fact that our sitting president mocked a journalist with a disability, and that he claimed he would consider punishing women who terminated their pregnancies. But what did I do to voice that disagreement within my small, rural community? Not much.

I live in Cherryfield, population 1,232, and my area is quickly transforming. We’re experiencing a newfound diversity as migrant families choose to remain here permanently. When I asked my boyfriend if this place has always been diverse, he said no. When he was growing up, there was just one person of color in his entire school. Today, Cherryfield and its surrounding towns of Milbridge, Harrington, and Deblois are home to many Latino families, primarily from Mexico and Ecuador. What have I done to make them feel welcome in our county that, despite its changing population, voted in favor of a man who believes fearing other cultures will offer us a better quality of life than welcoming and learning from them?

My after-march goal is to continue to speak out in favor of choice, take action against climate change, and promote LGBTQ rights, but to also learn from the women I marched with who have experienced hardships worlds away from my own. To support them and seek out their stories within my community. To be outspokenly pro-Immigrant, pro-diversity and pro-equality. Because the truth is, I don’t want to grow old in the same Maine that I grew up in. I welcome this change in our state’s culture, and I encourage my community to welcome it too. Because whether or not we’re afraid of it, the future of Maine is coming, the future of America is coming, and it will be filled with stories different from our own. Let’s listen to them.

More like this: These 17 signs illustrate the unity of the Women's March on Washington
What did you think of this article?
Meh
Good
Awesome
Bookmark
Posted In
Activism Narrative
Destinations
United States

7 states with strange alcohol laws you should know about

Fairbanks, Alaska, is the best place in the US to catch the northern lights