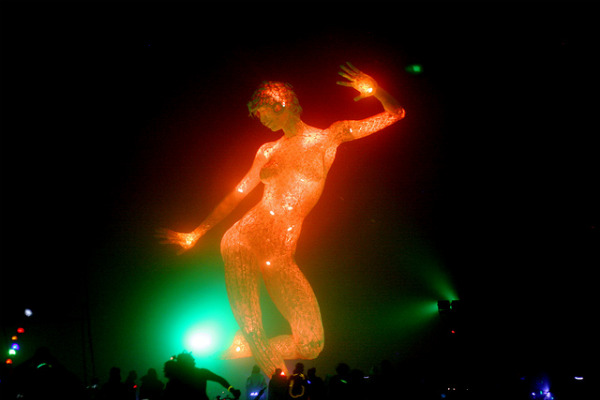 Only by letting go of what you think you want and where you are can you find where you truly need to be.

Last year, I hitched a ride with Vanessa at Trader Joe’s. After hours of people claiming they had no room in their vans, trucks and RVs, she made room in her two-door hatchback for me.

Last year, I recoiled when greeted at the front gates with a hearty “Welcome Home!” This was not my home.

Vanessa dropped me off somewhere near the coordinates of my camp just as a dust storm began. I spent hours wandering around. I stumbled into Center Camp, surrounded by naked people, music, and other loud noises. But the dust blowing through made my eyes burn and I couldn’t see. It was already dark when I found my camp. 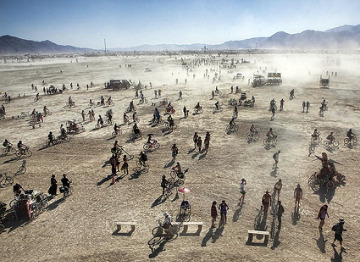 This year I drove myself and Chris, whom I’d found at Walmart in need of a ride. I wanted to help bring someone to burn as Vanessa had helped me.

We made room in the truck lent to me by unbelievably generous cousins: people who have never been to Burning Man and probably never will, but who already live the core of what Burning Man means. Rely on yourself. Give to others.

This time, that which used to feel strange was normal. I knew where I was and where to go. What took hours last year took minutes, and I found my camp immediately. I hugged everyone hello, filled the water, then ate a bit before getting to work building shade structures and setting up tents. Just as we finished, rain poured down, followed by a double rainbow encircling the entire city.

That night, Center camp. Klezmer music played on a stage while a woman covered in sparkly green body paint massaged a man in nothing but boots and fuzzy cat ears tied firm to his head by an uncomfortable-looking chinstrap.

In the center of the center, people slid across puddles on wet plastic covering the floor. “Pasties for your nipples,” I heard Pastie Dan say somewhere in the background. 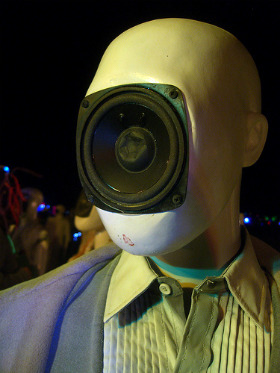 Absorbed, I walked through and out into the night and hopped on my bike to head towards the Man. I moved quickly, loving the wind and the cold of the night, and stopped only once at a Hug Snack stop to order a Cinnamon Twist.

I lined up, holding hands with several others. We wound ourselves into a caracol, held tight, hugged, then spun out into individuals again, each going somewhere else.

Later, at the Temple, the counterpoint of peace to all the madness, I read what others wrote on the walls. Words of things we have, things we want and things we no longer need.

In the distance I saw an electric fish roaming the playa, blasting Michael Jackson while carrying fire dancers in its big iron maw. Somewhere, from the outer reaches of the city, a gong bellowed out, sending rivulets of sound across the dust.

Last year, I resisted. This year, I embraced.

I love not knowing what to think, where to look next or how to interpret my senses. No, I crave it.