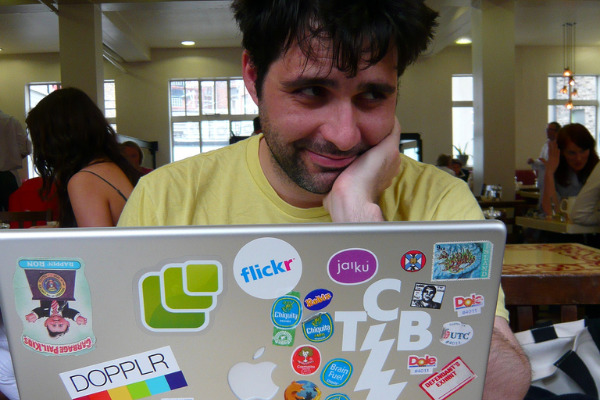 Matador editor, Carlo Alcos, has been spending a lot of time in cafes lately. He thinks he knows the answer.

Since leaving an office job almost a year ago and moving into the full-time realm of the freelance writer, I’ve spent a crap load of time in cafes. For the free wifi, of course. But even when I have wireless Internet where I’m staying, I still find myself sitting in cafes for hours on end. I have a love affair with them.

It’s counter-intuitive really: you would think the comings and goings of customers, the conversation at the next table, the staff iPod on shuffle and the cute barista would be insurmountable distractions. They’re not. I actually find myself more focused than when I’m at home.

A guy came in, bought nothing, totally destroyed the bathroom, put a $5 bill in the tip jar, and left without a word.

Some cafes have rules against people like me. There’s a cafe in Jackson Heights in Queens, NY, that states you have to buy something for every hour you’re sat at a table. I’ve been in cafes that strictly forbid the use of laptops on the weekends. Some cafes limit your online time by handing out vouchers that expire after a certain number of minutes.

I was even in a Subway in Halifax once with free wifi, and found out they blocked access to Facebook, Twitter, and Gmail. What the hell else are people doing on the Internet if not those things?

So what do we do? We seek out rule-less cafes with the beacon of free wireless, with bountiful electricity sockets and, hopefully, cute baristas. But if they’re not enforcing any rules, do we have an obligation to be “ethical”? In other words: Is there such thing as a cafe douchebag?

From their point of view

While in Toronto for a couple of weeks, I found my daily office in the form of Lit, an atmospheric cafe serving Stumptown coffee on Roncesvalles Avenue. After establishing myself as a “regular”, I asked the barista (who happened to be cute) what her thoughts were on folks sitting for hours using their laptops: “Personally, I don’t have a problem with it whatsoever. And neither do any of the people I work with here, as far as I know. We love our customers.” 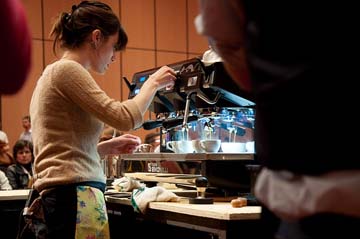 It wasn’t what I was looking for though, and scared I would further embarrass myself, gave up on the pursuit. “Well, if you think of any good stories, let me know.”

In my ongoing search for an expert opinion, I threw the question out on HARO. Candice Broom — a former barista at an indie cafe in southeast USA — told me of some particularly sketchy behavior:

The term servers use for people who hang around after they finish their meal is “camper.” Campers are welcome but, as with KOA, if you are going to use the campground you need to pay rent. I cannot think of any hard rule on how much you should tip for “camping”, but what usually works out as fair for everyone is that you tip the standard 20% for the price of your meal plus $1 for each hour you camp. Additionally, I would say “absolutely not” to the question of bussing your own table. 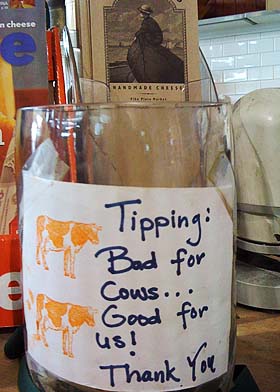 My take on it

Being the conscientious and humble Canadian that I am, I prefer to err on the side of politeness. Follow these tips if you’d like to lower your level of cafe douchebaggery.