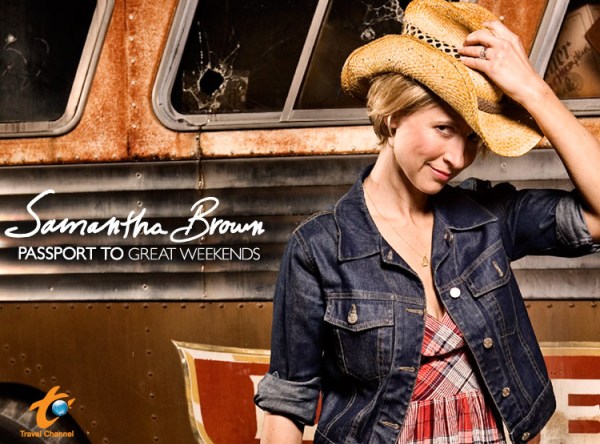 “Hi Samantha how are you!” My voice cracks just a little and I speak entirely too quickly. As an avid Travel Channel viewer, I have been a Samantha Brown fan since I discovered her show one rainy day in Taiwan over three years ago.

Every season, Brown takes us vicariously all around the world with programs like Passport to Europe and Great Hotels. Through the lens, she introduces people from diverse backgrounds and captures breathtaking scenes.

Viewers can’t help but be drawn to the natural warmth of Brown’s personality. She seems so down to earth that you almost feel like you’ve met her before, standing in line at the local grocer’s or sitting down at a neighborhood dinner party.

I grew up in New Hampshire and came from of background thinking other people got to travel, not me.

And yet, spending over 200 days traveling each year, Brown can rarely be found in her home in Brooklyn.

“I honestly never thought this would be my job,” Brown said. “I grew up in New Hampshire and came from of background thinking other people got to travel, not me. I didn’t think I had that much to bring to the table.”

In university, Brown studied musical theater and after graduation found her passion in improvisation and sketch comedy. Up until her agent informed her of the Travel Channel audition, Brown had no interest in travel or travel hosting. Unbeknown to her at the time, her theatrical skills that would help her land the job of a lifetime.

“Because we are unscripted, [travel hosts] have to roll with the punches and talk about destinations while somehow forwarding the plot,” Brown explains. “We have to juggle spontaneity with purpose.”

Spontaneity and purpose were exactly what drove Brown to stand in front of a commercial airliner poised for take-off in order to make her audition with the Travel Channel. Having missed the plane for her first audition, Brown was given one last chance at a live audition to impress casting directors who were unmoved by her demo reel.

Running late that day, Brown missed final boarding, but doggedly sprinted out onto the tarmac and begged her way onto the plane.

“I was standing at the nose of the plane shouting ‘Please!’,” Brown recalls with laughter. “I wonder about that pilot today [who] saw a little girl standing in front of his plane waving her arms and crying. The moment they let me on [the plane], I knew I had the job.”

Now, 10 years later, it’s hard to imagine anyone but the affable Brown leading us across boundary lines on our televisions. But travel programs were strikingly different during Brown’s audition and it took not only her brave determination, but classic good timing for her to land the hosting job.

“I was lucky that Travel Channel wanted a change,” Brown admits. “Back then, travel hosts were poised, perfect people, like Stepford wives, and I thought ‘I’m nothing like that!’ Now, you see a diversity of hosts, but back then it was a pretty boring pot of soup to be in.”

With the advantages of today’s new media and web 2.0 technologies, aspiring travel hosts don’t necessarily need agents or the cajones to stand in front of airplanes to grab network attention. For those who are interested in travel hosting, Brown recommends taking full advantage of the omnipresent internet and building a fan base from there.

“I think people have a lot more going for them than I did 10 years ago,” Brown said. “[Use] YouTube, Facebook, any of those programs to get your name out there. If you develop your own steady fan base and bring it to the Travel Channel or any other network, you can grassroots your own career. You just have to show your point of view is different and compelling.”

It’s encouraging advice, but Brown warns that the naive that travel hosting is not simply a vacation with the camera crew. Travel hosts are on their feet around 10 hours a day, shooting and re-shooting takes, dealing with hecklers that inevitably follow, and overcoming technological snags along the way.

“We were just in Key West filming aerobatics,” Brown said. “I get nauseous pretty easily and was glad when we finally [landed], but we found out none of it was caught on tape so we had to go up and do it all over again. Through the years, I’ve learned that you definitely have to roll with the punches.”

A Life on Camera

In addition to juggling complications at work, Brown struggles to not let her personal life get overwhelmed by her career, not an easy feat for someone who spends most of the year away from home. This past year has been especially trying since Brown spent 240 days traveling, 20 days over her annual average.

Recently married, Brown is determined to make her personal life the focus of 2009.

“It’s tough, very tough,” Brown admits. “My life is literally on camera. When I go home, I’m just catching up with bills, but this year my big project is my personal life.”

this year my big project is my personal life.

Don’t get her wrong, though, Brown absolutely loves her job. It has taught her not only gratitude in her everyday life, but also the immense importance of communication.

“My life has completely changed [due to my job],” Brown said. “When I started, I thought travel meant checking things off a list. But I’ve learned that it’s all about connecting with people, looking at their everyday life. It’s about unlocking that and celebrating the small everyday moments; that’s my passion.”

For more information on Samantha Brown, including her taping schedule, you can visit her page on the Travel Channel website.