FRIDA declared that her art was not surrealistic nor did it reflect dreams, in spite of what they might seem. Her paintings were representations of her own life and emotions: “Me pinto a mí misma porque soy a quien mejor conozco.”

For Frida, life was a series of troubles and challenges. When she was eighteen she was in a disastrous bus accident. The pain from her injuries would make her suffer for the rest of her life. 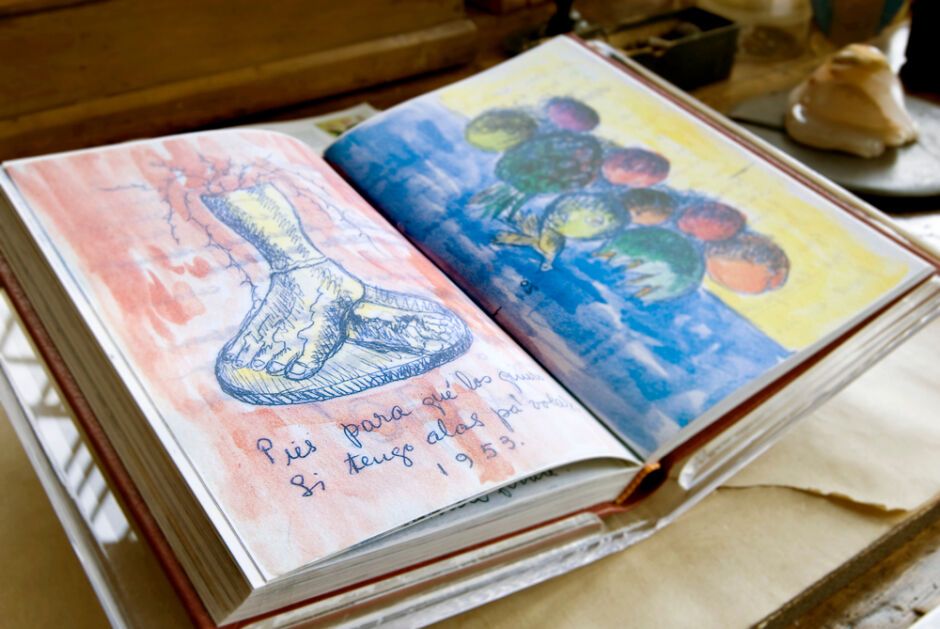 Drawing “Pies para qué los quiero si tengo alas para volar” (Feet. Why do I want them for? If I have wings to fly)

In the painting (which you can see in the video below), Frida drew herself naked from the waist up, wearing a steel brace to hold her body as the doctors told her to do. A huge opening runs through her torso to reveal her broken spine. Hundreds of nails are embedded in her body, the one in her heart showing an enormous sadness. We can see tears in her eyes and, behind her, a desolate background. The entire work is a desperate cry of pain.

Kahlo worked on this portrait during the first years of their marriage. She painted both of them face forward with serious expressions, but holding hands as a symbol of the great love they feel for each other. You can see Frida and Diego Rivera portrait at SFMOMA. 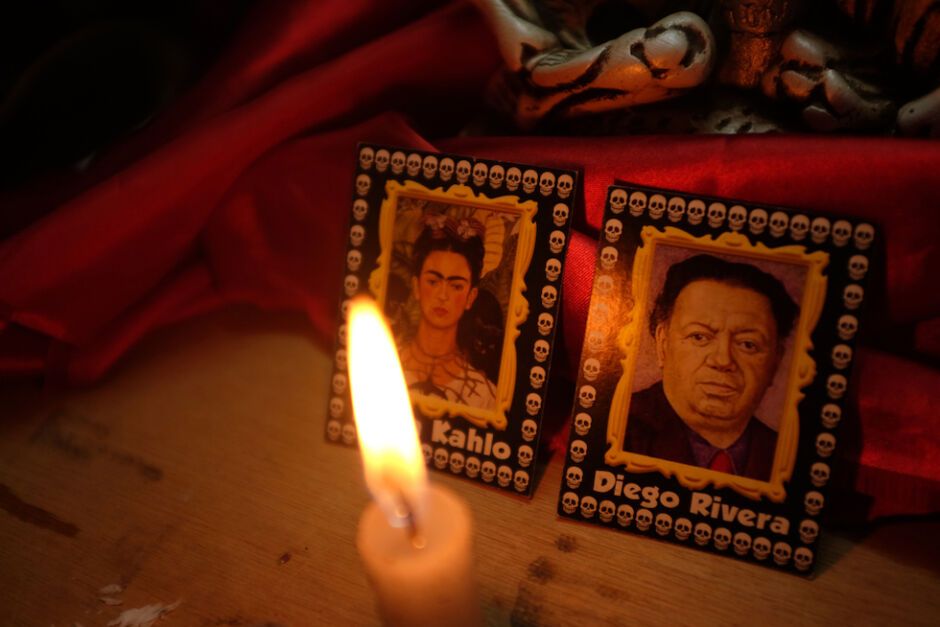 Frida stuck to reality, showing how different the sizes of their bodies were. Diego was tall and burly; she was small and thin. Since the beginning of her relationship with Diego, Frida changed the way she dressed and adopted typical Mexican clothes. She painted her husband holding a palette and brush in his right hand. Frida admired his artistic talent. Unlike other pieces, where lush backgrounds and colorful scenes dominate, in this picture there is nothing to distract the attention from the two characters.

“Aquí me pinté yo, Frida Kahlo, con mi reflejo en el espejo. Tengo 37 años y es Julio de 1947. En Coyoacán, México, el sitio en donde nací” reads a band at the bottom of loose hair the painting. It is definitely a work in which she seeks to reinforce her identity, as indicated by the scroll’s presence in the foreground with its mention of the city where she was born.

In Frida Kahlo paintings, the hair is a main character in several pieces of art. In some, by drawing it beautifully long and thick, she seeks her husband’s admiration — Diego admitted Frida’s hair was one of the things he loved most about her. But Frida has also represented herself with cropped hair and masculine outfits, such as in the 1940 portrait that MoMA holds in its collection. 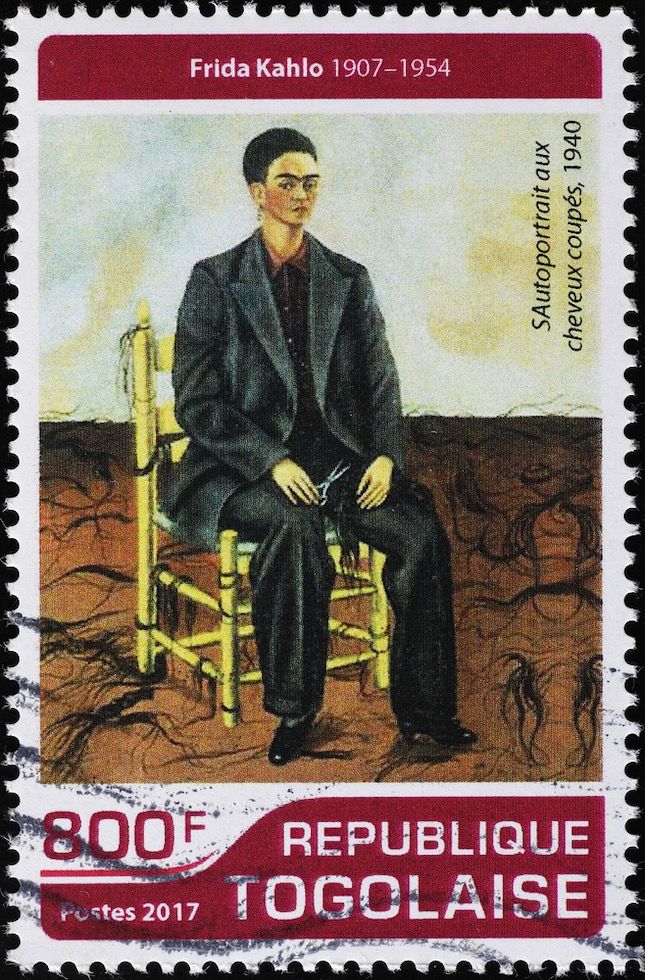 Self-portrait at the border between Mexico and the US 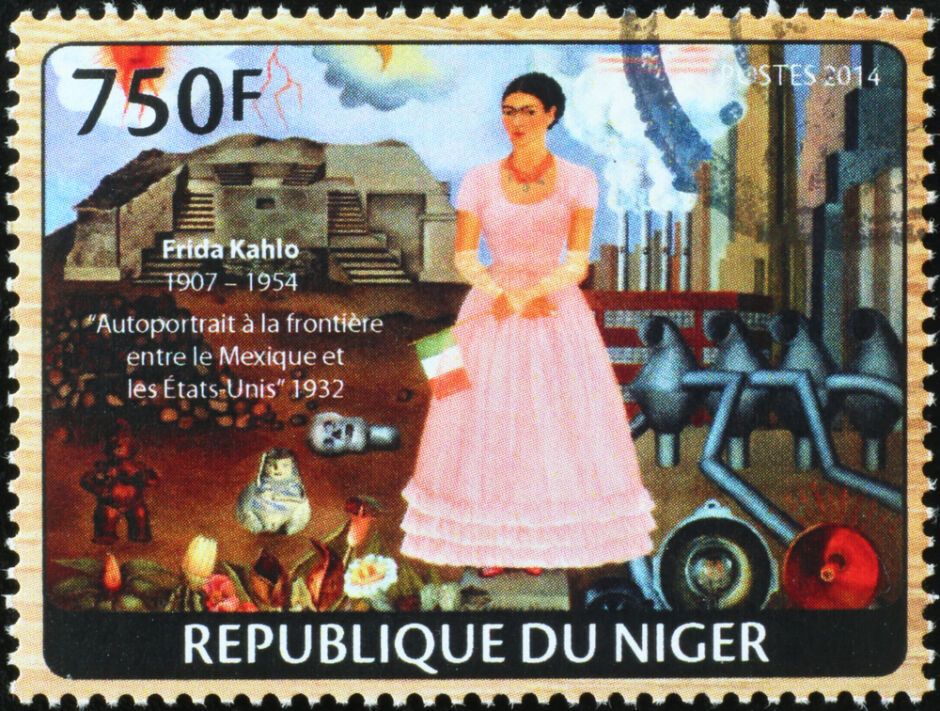 When Diego was invited to work in the US, both he and Frida stayed there for almost three years. Diego loved his new life in a place where his talent was appreciated. But for his wife, the new country lost its charm quickly.

Frida missed Mexico and wanted to go back. Out of those feelings emerged this painting. Frida is in the center of the picture, on a pedestal, wearing a simple pink dress. The background is full of images that evoke both countries. On one side, her vision of Mexico is represented by nature, vibrant color and images of the Aztec culture. On the other side, in the USA prevail industry and technology. Kahlo holds in her hand a little Mexican flag, signifying the place where her heart belongs.

The natural abortion she suffered in 1932, while living in America, was one of the most traumatic moments of Frida’s life. In the painting, we see her lying in a hospital bed, covered in blood. From her still swollen stomach emerge six red and thin filaments that appear to be umbilical cords. Each one of these filaments connect her body to an abortion-related image: the fetus of a baby boy, “Dieguito,” the son she longed to have but never did; a purple flower that she received as a gift from her husband; a snail that symbolizes a slow and painful abortion; the figurine of a woman’s open torso showing her organs (almost declaring she detached from her body as it had not been able to carry out the pregnancy).

She painted a machine to reflect all the cold instruments used for uterine curettage; and finally, through the image of her pelvis she transmits the physical pain.

The painting is part of the Museo Dolores Olmedo collection, and you can see it online here. 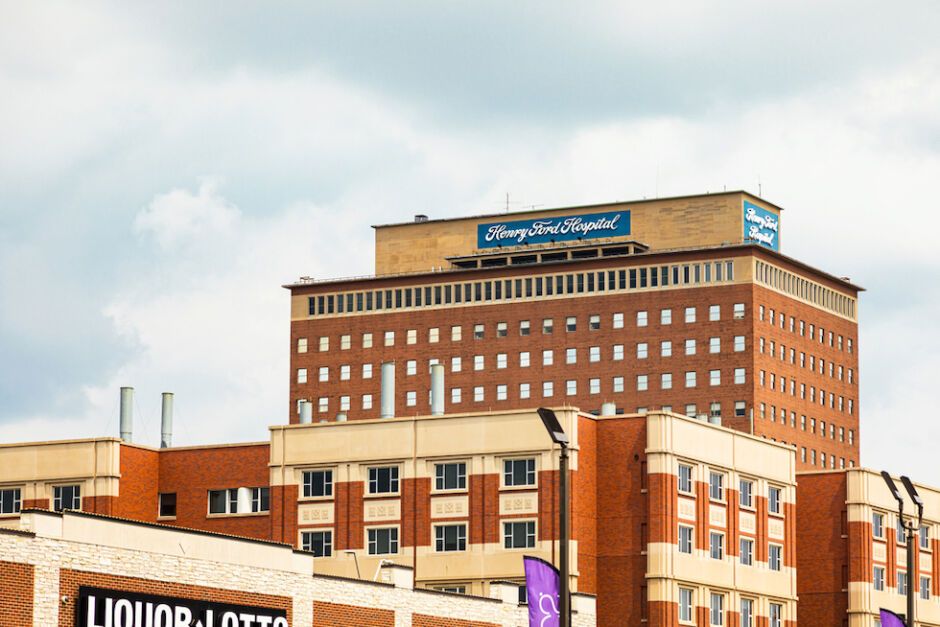 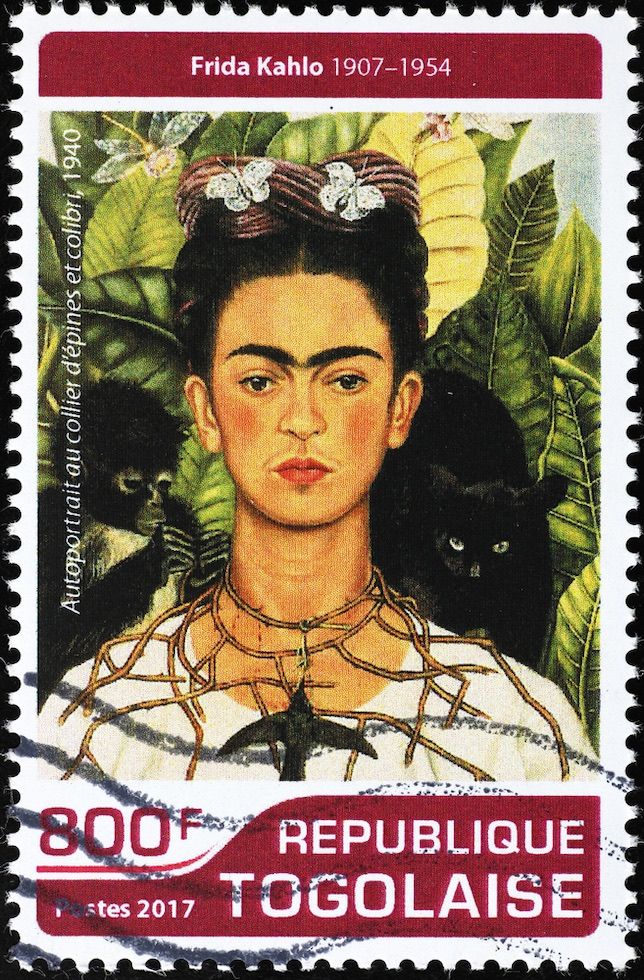 Frida painted this portrait during a time of crisis in her marriage. The main element is the thorns necklace sinking into her neck — a sign of pain caused by her broken relationship with Diego. This symbol comes from the famous Crown of Thorns which is very significant for Christians.

From the necklace hangs a black, dead hummingbird, its outstretched wings compared to the shape of Frida’s eyebrows. The hummingbird symbolizes the end of her marriage. On her shoulders is a black cat (a common symbol of misfortune) and her monkey (a gift from Diego), that looks distant and indifferent, just as she felt treated by her husband. In this painting, Frida is wearing the traditional Mexican dress which had already become part of her own identity. 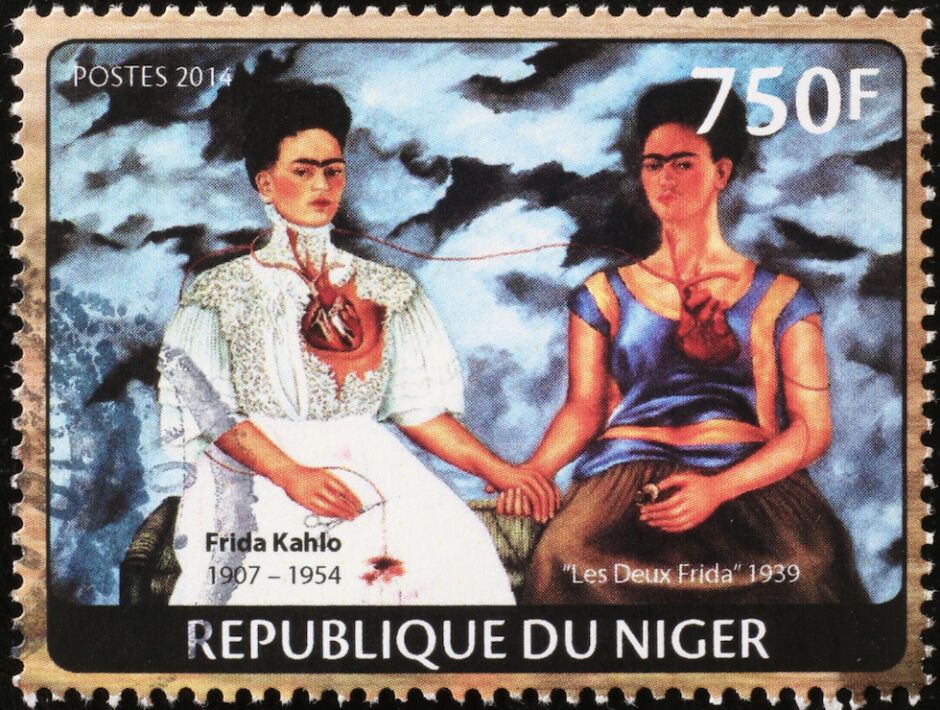 The inevitable happened. In 1939 Frida and Diego divorced. She was devastated and her emotions were reflected in this painting. She drew two identical Fridas, but with different personalities. One is the “Mexican Frida;” the one Diego Rivera fell in love with. The other is “European Frida” — the new and independent artist that’s recognized worldwide, but also, the woman her husband abandoned.

Their hearts are exposed over their clothing, and there is a thin vein passing through them both, uniting them. Victorian Frida holds surgical scissors that cut the vein in her lap, and the blood spills on her white dress. Frida was experiencing real sorrow, the kind of sorrow that made her feel she could bleed from the pain. Both women are holding hands as if the artist accepted she was the only person who understood her, loved her, and could help her to move on. 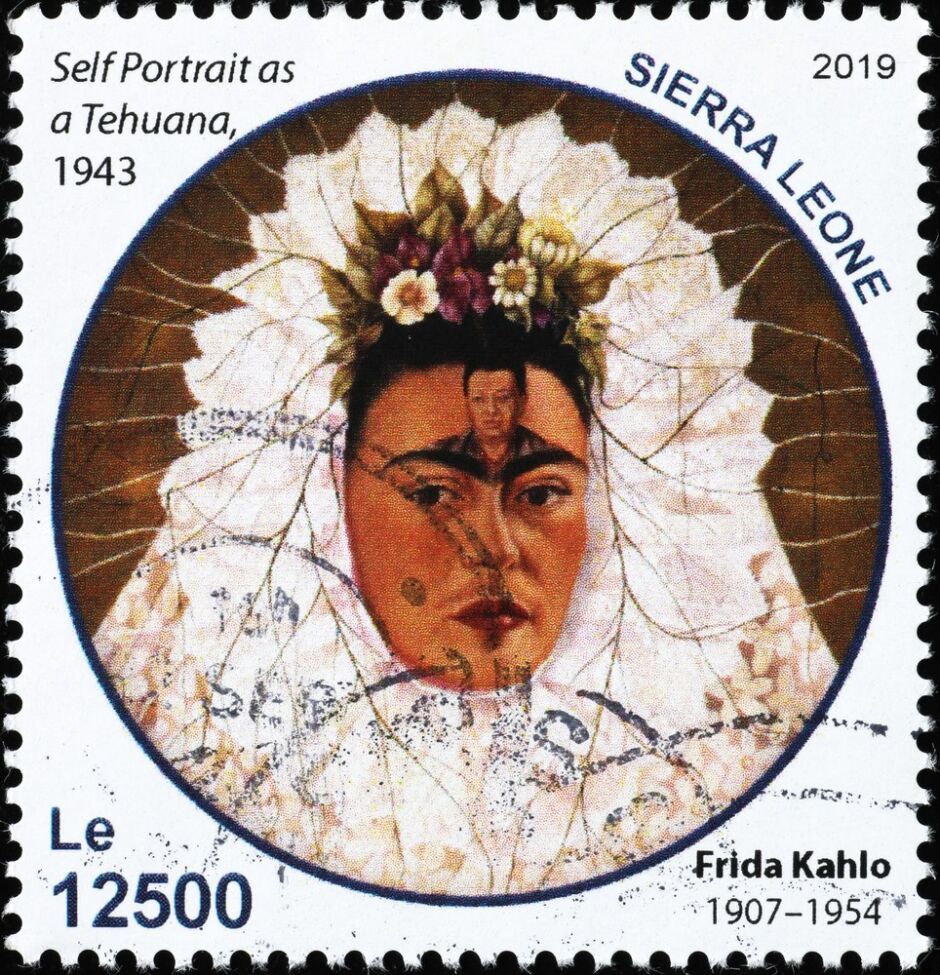 Despite their divorce, Frida never stopped loving Diego. She knew her ex-husband wouldn’t give up having affairs with other women and would never be able to be the husband she desired. However, she had still place for him in her heart and her paintings.

In this self-portrait, she painted his face on her forehead, in place of the third eye, ever present. Frida wears an elaborate tehuana Mexican dress — Diego’s favorite — perhaps in an attempt to recover his admiration. Around her face the whole painting is full of cracks, symbolizing the marks in her soul. 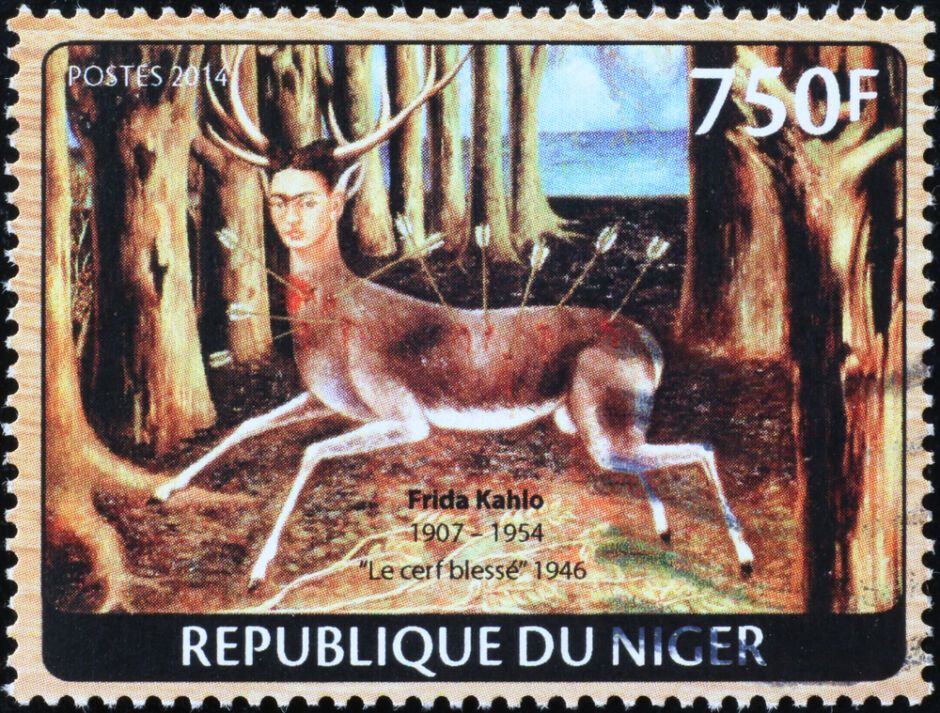 There’s a way to know when a painting by Kahlo expresses a feeling of unbearable pain — in those cases, Frida was unable to replicate the suffering in her own body and therefore she used other images. In this case, she drew a deer with her face on it.

The poor animal’s body is fully pierced by arrows. It is alone and injured in the middle of the forest. Frida painted this picture after a spinal surgery that would supposedly lessen her pain, but on the contrary, it brought even more backaches. In the lower left corner of the work, Frida scrawled the word “karma,” meaning “fate.”

The loving embrace of the Universe 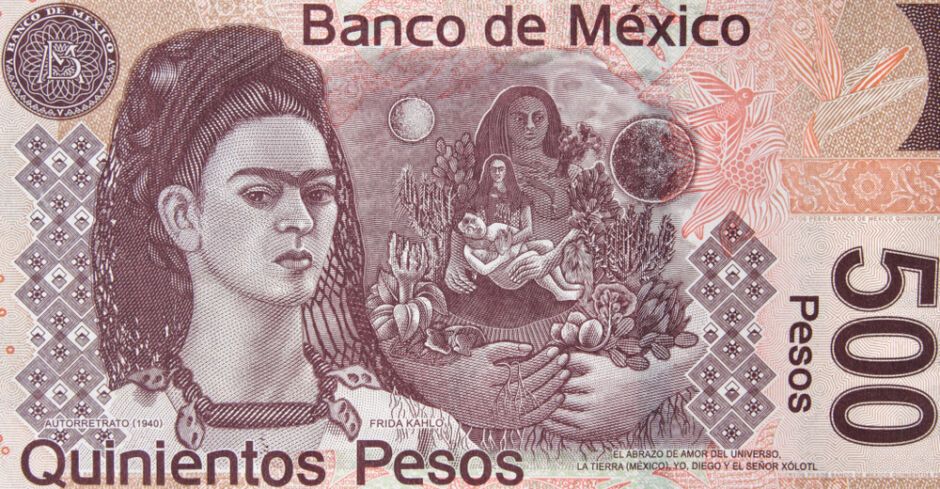 Frida Kahlo paintings appear in multiple everyday objects, such as banknotes and stamps. In “The loving embrace of the Universe”, included in the note abobe, elements abound: Mexican representations of the day and night, the moon and the sun, life and death, Mother Nature. In the center of the picture we see Frida hugging a naked and childish Diego, illustrating the great love she had for her husband — a love that was changing shape. At the same time, the image reminds us of Frida’s inability to procreate, which undoubtedly was the greatest wound in her life.

Read a version of this article about Frida Kahlo paintings in Spanish here.