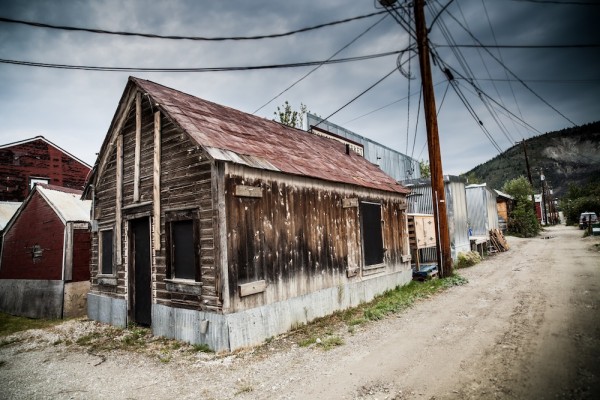 DAWSON CITY IS A MERE EIGHT HOURS DRIVE from the Arctic Circle, making the Dawson City Music Festival one of the most remote on the continent.

It’s just far enough from a big city to attract only the most adventurous artists and festival-goers, yet on arrival I felt I somehow landed at the center of the universe.

I angle parked our pothole-weary truck in front of the Eldorado Hotel. I was traveling with photographer and Matador Ambassador Colin Delehanty.

We’d met just that morning but the day-long drive from Whitehorse to Dawson through the epic Yukon wilderness was a great setting to get acquainted.

From our conversation it was clear that we were a good team for covering this journey. Colin’s interest was in photographing the landscapes of the territory; mine was photographing the people who call this place home.

We emerged from the truck and stretched out our legs. A celebratory drink and a meal seemed called for, so we made our way through Dawson’s preserved Klondike-era downtown. 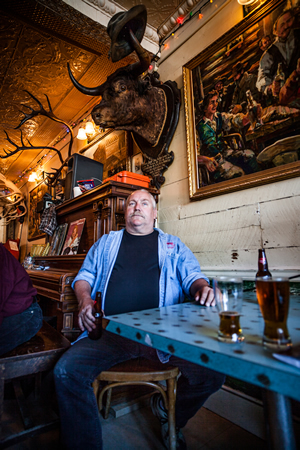 The town has a placid museum-like quality at first glance, but that impression was quickly disrupted when I noticed the local street dogs skulking under the shadows of the buildings, the gold-miners tromping heavily by in gumboots, and the big logging trucks emitting the scent of fresh cut wood and chainsaw gas.

Despite all the preserved touristy history of this place, it’s still a working town.

The Dawson City Music Fest has been rocking this northern town since 1979. It’s a grassroots, volunteer-powered event known for charming those who make the journey into returning year after year. During the festival, the population swells with young travelers, musicians, and artists. This July weekend was warm and the sky was clear. Twenty hours of daylight and northern boreal air seemed to supercharge us in preparation for three non-stop days.

There were a few great unofficial venues that I discovered over the weekend as well. Of the many saloons, my favorite was the Snake Pit. This is definitely a place where hard-working trappers, gold miners, and prospectors go to drink.

Stepping inside, my eyes adjusting to the dim light, I met the gaze of a hat-wearing bison head mounted on the wall. He looked dutifully over the band at the boisterous crowd with two cigarettes dangling out of his mouth. 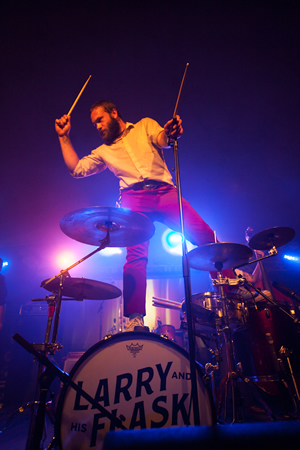 It was Chicago-born Jimmy D. Lane’s blues-rock licks that lured me in the door of the Snake Pit. When he finished his set I asked him how he described his music. He replied humbly, “You know, I have learned a couple of things from the guys that raised me from a pup. You know: Muddy Waters, Jimmy Rogers, Little Walter, Big Walter, Willie Dixon, Buddy Guy… I like to think that I carry it on pretty good… I hope.”

Meanwhile, on the main stage, 70-year-old music industry legend Andre Williams was about to whip the crowd into a frenzy. During his 55-year music career he has been a recording artist, songwriter, producer, road manager, and — according to the internet — he’s the father of rap and all-time master of “sleaze-rock”. Tonight he was wearing a white fedora, silk purple slacks, and a deep red silk shirt. I was amazed watching how this unapologetic and suave “dirty old man” could own this mostly twenty-something crowd.

The show stoppers of the festival in my opinion were the Eugene-based punk rock hillbillies, Larry and His Flask. This band is entertaining in the extreme, especially the gravity-defying double bass player who somehow bounced like a rubber ball, bass in hand, from one side of the stage to the next.

Later, at the beer garden, the crowd was getting pretty greased. Mud-wrestling broke out in what seemed like a spontaneous bout of good-natured score-settling. I was told that the tradition started a number of years back and is called “mud dancing”. At any rate, the dance ended up on the ground pretty quick. Depending on who was dancing with who, it could be courtship or domination, or both. The crowd cheered them on regardless.

For over a century now Dawson City has been the place people have come to cut loose. In the audience and on the stage, there was not a shred of self-consciousness or pretense. We were all simply out here in the wilds of the North. As Jimmy D. Lane put it to me in the Snake Pit, “Dawson City is a once in a lifetime place and is just about real people having a real good time.”

Tagged
Travel Canada
What did you think of this story?
Meh
Good
Awesome
✖
travelstoke
Download the mobile app
stoked by