View all travel news
Top Destinations
Top CitiesView All Destinations
Trending Regions
Trending Cities
Load More
The first Thursday of every month finds a short stretch of Melrose Avenue filled with some of the world’s most famous food trucks. We sent our resident porker in for the kill.

FIFTEEN TRUCKS WERE present as my friend Shell and I hustled towards the three blocks that housed them, all parked curbside and ready for action. I’d had some successful binges before but I knew that this was going to be a challenge. There was too much concentrated yummy, even for this guy. 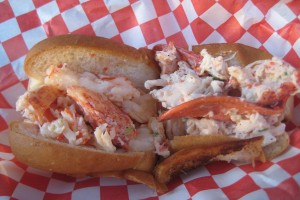 We started with Lobsta Truck, which served up a GAH-worthy lobster roll, dressed with just enough butter not to overpower the meat.

The little suckers are flown in from Maine. This was big chunk stuff, not chintzy knuckle meat. At twelve bucks, it was the most expensive thing I’d eat all night, but also the most satisfying.

We passed trucks that I’d heard of but wasn’t feeling, knowing that I’d have to pick my battles. Ludo Fried Chicken tempted with its chicken balls (looked better than it sounds), as did Buttermilk, whose inventive brunchy-ness was undeniably killer (I wanted to try the Hawaiian Breakfast Sliders, made with Portuguese sausage, shoyu scrambled eggs and Hawaiian bread). 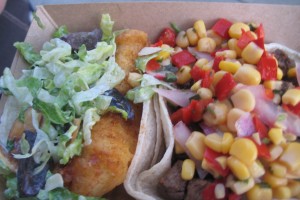 We fell for the hype and opted for Komodo next, which served up a taco made with fish, grapes and roast almond salad. It sounded crazy enough to work but it really tasted like a porned up Filet O Fish, falling dead on my taste buds.

Shell’s Komodo 2.0 taco looked a lot better – seared sirloin with jalapeño aioli and southwest corn salad. Six bucks total. I kicked myself for not trying the meatballs with romesco sauce, which would probably have been better than both of our choices. 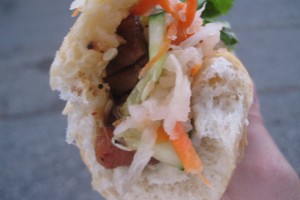 Mandoline Grill had a chalk board hawking bánh mì, which was a simple sell for me.

It was less spicy than those of my favorite Nom Nom truck (not present), but damned good. The salad topping (a mix of cucumbers, carrots, daikon, cilantro and jalapeno) was in perfect harmony with tangy chicken. A win.

We opted not to wait in line for the ever-popular Grilled Cheese Truck, knowing that the cheesy mac & rib sandwich would put us in a coma for the night. 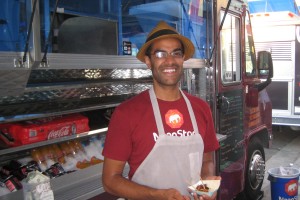 Nonstop naan! One of the owners of Naan Stop smiles on front of his truck.

We also politely declined flirtation from Lee’s Philly Gogo, whose chef had worked at the famous Philly cheese steak outpost. The steak & shrimp special was hard to pass up. Instead we tried a sample from NaanStop, which hooked us.

I toyed with the idea of having a samosa (mom’s recipe) and instead grabbed some masala fries, topped with a creamy spicy tomato gravy and yogurt cilantro chutney. The were expertly goopy and right on, although I would have preferred the whole thing if the fries were of the thicker variety (the little ones got soft pretty quick). 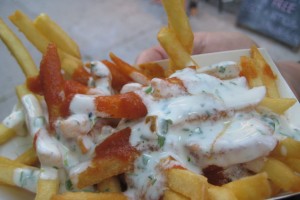 I left rooting for the two brothers who’d only owned these wheels for six months, and promising I’d come back for one of the Naan sandwiches.

We entertained the idea of having more spuds at Frysmith, where chile cheese fries sport beer-and-chocolate-beef-chile topping with cheddar cheese. We passed, fearing outright bowel rebellion.

Far past the point of gluttony and at the end of our rope, we split a homemade ice cream/cookie contraption from Cool Haus, who allow you to mix and match your own ice cream and cookie base. 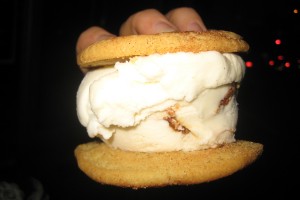 I let Shell wear the pants. She ordered a real beast – snicker doodle cookies gummed up with Haus’s most famous iced cream flavors, brown butter & candied butter. It was scarfed quicklike, and not without a lot of guilt.

Follow all of the trucks on Twitter for their current locations and see who’s up next Month for Melrose Night by following @melrosenight.