View all travel news
Top Destinations
Top CitiesView All Destinations
Trending Regions
Trending Cities
Load More
Rick Powell came to Buenos Aires in September 2009 and the street art and artists of the city inspired him to start the San Telmo Art Walk. Then, in May 2010, he wrote the first blog post for Juanele AR.

THE SAN TELMO Art Walk (led by our own Kate Sedgwick) is now a part of Juanele AR. The organization also promotes Argentinian artists and hosts art-related dinners and events. They’re also in the midst of a fund-raising effort at Indie GoGo.

I emailed Rick to get some back story on the projects and find out where they’re headed.

When did the Art Walk start, and what inspired you to start the tours?

Two days before I landed in Buenos Aires, I randomly decided to stay at Art Factory Hostel in San Telmo. Every available wall space in Art Factory is painted by street artists, most of them local, but some of them international travelers who just picked up a brush or spray can and painted.

I got to watch the process when Dano and Cabaio Stencil System transformed the [hostel’s] walls and bar, respectively. So the hostel itself was an inspiring crash course in street art. Walking around the streets of San Temo I saw the same artists’ work, and I also discovered a burgeoning gallery scene, including Appetite (now closed unfortunately), Wussmann and Zavaleta Lab, just to name three. Yet the hostel had made no real connection to all this stuff going on right outside its doors with the stuff going on inside.

The Buenos Aires art scene is open in a way that I’ve never experienced before. Sure, there are insufferably stuffy pockets of establishment art but no one pays much attention to that scene at all. It’s simply dying a slow, slow death.

It made sense to me to connect the hostel and its guests with all that, so I did some research, introduced myself to the galleries — who were uniformly welcoming and enthusiastic – and the San Telmo Art Walk was born.

We still end the tour at Art Factory and it’s one of the few ways that non-guests can see all the cool stuff on the walls there.

How do Juanele AR and the Art Walk work together?

Juanele AR’s overall goal is to promote Argentine art in English. It seems a natural fit. It’s also one of the few sources of independent income that we have [for Juanele AR].

What is it like to go on an Art Walk?

The tours are usually led by one sassy guide [that’s Kate!], but I sometimes join the tours to see what’s new in the streets and because I enjoy walking around in San Telmo and meeting the folks on the tour.

We say the tours are three hours but they have gone longer when the group is enthusiastic to continue. In three hours we only scratch the surface. I once led a 7-hour tour out of Art Factory Hostel with a large group of crazy, smart backpackers. It turned into a bar hop. 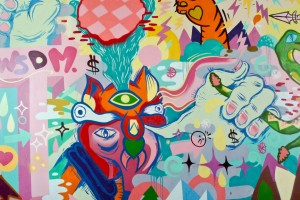 Painting on the wall of Juanele's office.

We’re also pretty flexible. If guests want to stop for a coffee or a beer or lunch, or have particular interest in a gallery, we’ll almost always accommodate them. The tour is as much about the onda of San Telmo as it is about the art and street art there.

What was the inspiration behind Juanele AR?

I was inspired by the accessibility of the art scene here and the equally open onda of the artists themselves. Yet, despite that there was no consistent and serious coverage of the Buenos Aires art scene in English, either printed on dead trees or on the Web.

There’s plenty of coverage in Spanish spread over several different print and Web publications. On the Web there’s Ramona, from which I stole the concept for the name, Juanele.

I liked the idea of a personal name representing what we do. (Ramona does it.) We’re not a business, and we’ll probably never make a profit, we’re just people enthusiastic about art, looking at it with our own eyes. When I was searching for names, I came across the biography of Argentine poet Juan Laurentino Ortiz whose fans nicknamed him Juanele. I didn’t know him before that but I liked the way his name rolls off the tongue.

Most of the Web publications read more like calendars or PR — there’s little criticism or first-person blogging. As far as I know, there’s no one source in either language that’s doing what we’re doing — blogging all week long about the arts in Buenos Aires.

I started Juanele AR to introduce tourists, expats and virtual travelers to a vibrant scene that has largely been unknown to those groups. Tango and beef aren’t all there is to life in Argentina.

Next Page
Tagged
Photo + Video + Film
What did you think of this story?
Meh
Good
Awesome