I first picked up a camera during my junior year of high school, as part of a photography 101-type class. That year, I learned the basics of film photography and even had a development session in the darkroom. However, living on the edge of the digital era, I quickly found myself immersed in digital photography, and didn’t look back until moving to China in 2007. I brought my only camera at the time, an old Cannon AE-1, and thought I’d be able to transfer my years of shooting digital over to the film format easily.

After 12 rolls of films, countless memories squandered, and about 200 RMB out of my pocket, I gave up and ran back to digital with my tail between my legs. Film was frustrating. The photos didn’t turn out. It took forever to get them back. I only had a limited number of shots. I couldn’t look at the photos on the viewfinder right away. To get better I needed time, patience, and expendable cash; something my time in China didn’t allow.

I picked up film photography three years later after returning once again from a stint in Asia, this time with the patience, some money, and the motivation to learn. Since then I’ve been shooting film regularly, learning from the experience, and honing my photography skills. I won’t say I depend on my film cameras for all assignments, but I enjoy using them because I enjoy photography, and I appreciate how they’ve helped me embrace and learn the medium.

Yes, it’s costly, takes forever, and can be as frustrating as waiting for a bus in Bangkok, but I love shooting film, and here are 10 reasons why. 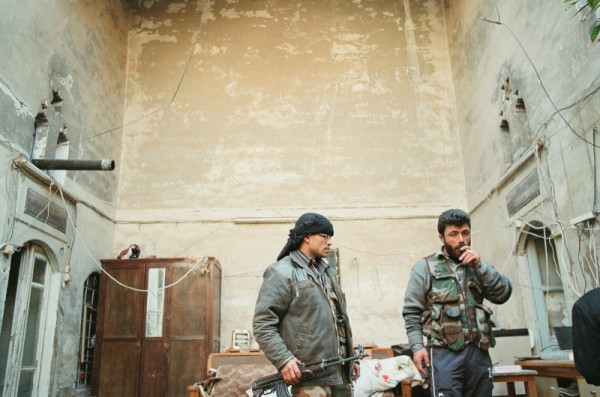 Two fighters with the Free Syrian Army leave their safe house in Aleppo.

1. It’ll teach you about your camera.

Unlike a digital camera that can be picked up by anyone and used immediately, it’s hard to use a film camera without knowing, at least at a basic level, how a camera operates. And it’s even harder to get good pictures without a detailed knowledge of how photography works.

One of the beautiful wonders about our digital toys is the ability to change ISO (how sensitive the image sensor / film is to light) instantly, something a film camera keeps locked down for the duration of the film roll. Although some of the newer film cameras have automatic shot settings, many of the older analogue cameras rely on fully manual shooting with near-basic light meters, if any, to gauge shots. Having to adjust settings to your surroundings might not be something you’ve ever done or had to do, and a film camera is going to force you to learn.

Even if you do shoot on manual with your digital, you know you’ve been able to check over each shot, recalibrate, and try again. Film removes any second chances — it has to be right or it won’t work. You won’t be able to check your attempts until you get your prints back, which also happens to be one of the most frustrating aspects of film photography. 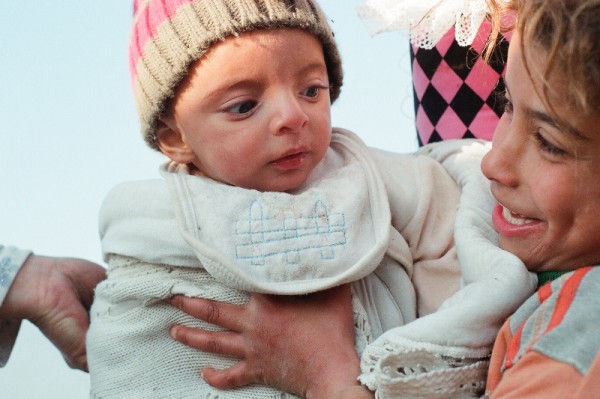 A young girl holds up her little sister for the camera in a makeshift Syrian refugee camp near the Turkish border.

There’s a certain texture to film, the level of grain stripped away by megapixels and jpgs. It’s true, you can certainly replicate a film look in Photoshop, but there’s nothing like the real thing, watching it turning out on each and every frame. The texture. The saturation. All those visual elements that got many of us into photography in the first place are very much alive in film.

Aspects like depth of focus and bokeh (how the blur of out-of-focus elements in a picture appear) take on a beautifully different look in film than in digital. You’re capturing the light on a strip of film, a physical frame for each time you open the shutter, not flashing light on an image sensor that translates into a digital file. Film has that beautiful old, rich, and pure look that defined so many eras of photography.

I grew up scouring National Geographic, which in many ways affects how I judge my own photos today, and watching the colors match up in my head to the ones that inspired me is a perfect example of the value of film photography. 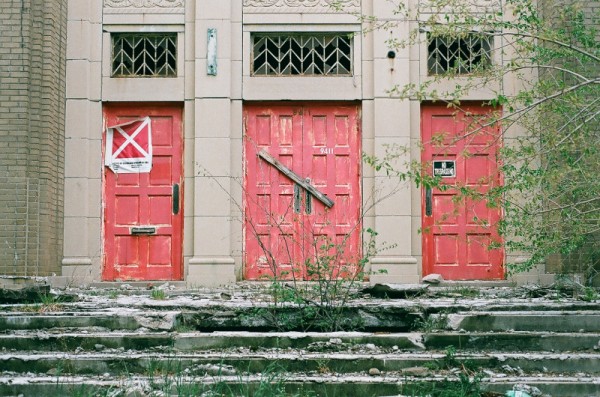 The barred doors of an abandoned church in Cleveland, Ohio.

There will always be antique cameras — no one’s going around and rounding up the metal scraps of yesterday to hide them from future generations — but most camera companies have stopped producing new film cameras. It’s not an exaggeration to say it’s a dying art form.

As Kodak closed its doors this past year and Fujifilm plans to cut producing yet another line of film, how long might it be before this art form is completely unaffordable or gone forever? The Economist thinks fairly soon. I don’t want to have to say to my child one day, “I only had 36 frames when I walked up that hill to school two miles in a snowstorm, barefoot.”

You can find an up to date listing of companies still producing film at ACE.

4. You’ll learn where your hobby came from.

Entering the film world opens the opportunity to learn where photography came from, and provides a much deeper understanding of how photography works outside megapixels, brand names, and auto settings. Shooting film may spark your interest in the different types of film and the cameras that use them, and what came first technologically.

Old cameras are sitting around garage sales everywhere waiting to be picked up and played with. Give something new (old) a shot. Opening that first door will lead to more options and aspects of photography to fool around with, increasing your knowledge of how your art form came to be, and what you can still do with it today. 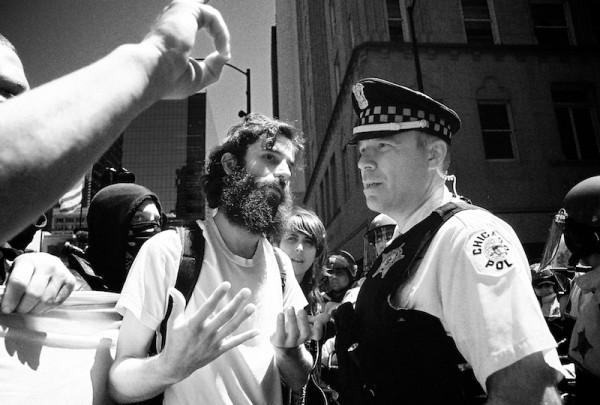 A protester argues with a Chicago police officer during NATO protests.

Photography’s most important factor is light. Without it you can’t make a photo. It controls what comes through your lens and makes an image. Without the quick shifts and adjustments to settings digital cameras provide, and even sometimes do automatically, you’ll need to gain a deeper and more intuitive knowledge of how light is affecting your photos. You’ll be slower at first, but everything comes with time.

With film, you’ll no longer have the time or spare frames to waste measuring your light. Shooting with film will teach you to be at the top of your game at all times, focusing on light angles and availability, with an eye toward how the image will turn out. You may only have a few frames with which to shoot that image you see, and you’ll need to make it count the first time, not the 15th or 700th like you can with a digital camera.

6. It forces you to take your time with shots.

Unlike digital photography, film photography has limits to the number of frames you shoot. Unless you have a duffel bag stuffed with rolls of film, you’ll never be able to shoot as many frames as you would on a digital camera. Shooting with film might be difficult and frankly annoying at first, because you know there are only a limited number of frames on a roll before you’re spending another couple bucks both for processing and for the purchase of another roll.

But having a limit on the number of times you can click that shutter will automatically make you value them more, putting more emphasis on how well you use them and intrinsically forcing you to spend more time framing, gauging light, and making sure each and every shot is perfect. Cutting out the ability to “spray and pray” makes shooting harder, and in struggling with these new challenges, you’ll not only become a better photographer, you’ll come to view the entire medium differently. 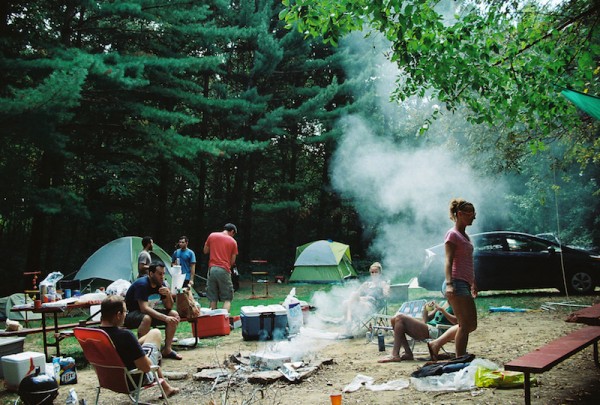 A campsite in western Wisconsin.

All these bullet points emphasize one thing: Film photography isn’t easy but it will make you better. The progression of digital photography is one of the most amazing things to happen in the world of recorded human history, allowing everyone on Earth to snap and share photos with the click of button, without even a basic knowledge of how images are created. No learning curve, no waiting.

Every time I pick up my digital camera, or pull my phone out of my pocket, I can look over what I just shot, edit it instantly if needed, and share it with the world. Think of shooting film as similar to going camping and dealing with the small discomforts, but knowing that a warm, familiar house awaits you when you’re ready to leave.

Too much and too long with the same thing will grow boring. Putting down something you’re familiar and comfortable with will spark new interests, just like stepping out into a new city or trying exotic and unfamiliar food. Leave your comfort zone and you’ll look at your hobby with fresh eyes, have to adapt to new settings and challenges, and rethink the art form you enjoy.

Although their prices have fallen dramatically in recent years, good starter digital cameras are still out of the feasible price range of many people. On the other hand, pristine film cameras that were carried around by pros just a decade or two ago can be found cheaply. The loss of extra gadgets, falling demand, and the advent of cheaper, easy-to-use digital cameras has caused film camera prices to plummet.

Don’t get me wrong, you can still go out and spend a fortune on film bodies (think Leica), but the prices for professional-grade film cameras are incredibly affordable.

Maybe this is a con. 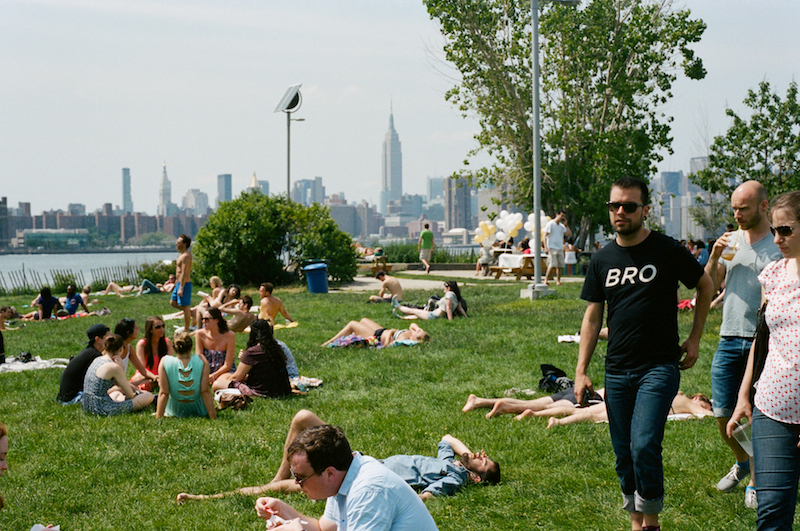 People relaxing enjoying the summer in a Williamsburg park in New York.