We’re in the square between the train station and the Dom. The spires of the cathedral watch over us. Wiener smoke billows from wooden shacks lining the square. My wife is hungry. We’re all hungry.

We walk around the stalls until we find an opening. Fran hits the beer shack next door. They’re opening bottles of Bitburger, a pilsner, and pouring them into plastic cups.

There is a round, medieval-looking rack hanging over a charcoal pit. It’s piled with wieners, steaks, and buns. I get the girl’s attention and order four bratwursts. Vier bratwurst bitte. She smiles, tells me the price in English.

I take off my gloves when she starts handing me wieners. By the time Fran shows up with the beers my fingers are numb. We all tap our cups together and say “prost.” 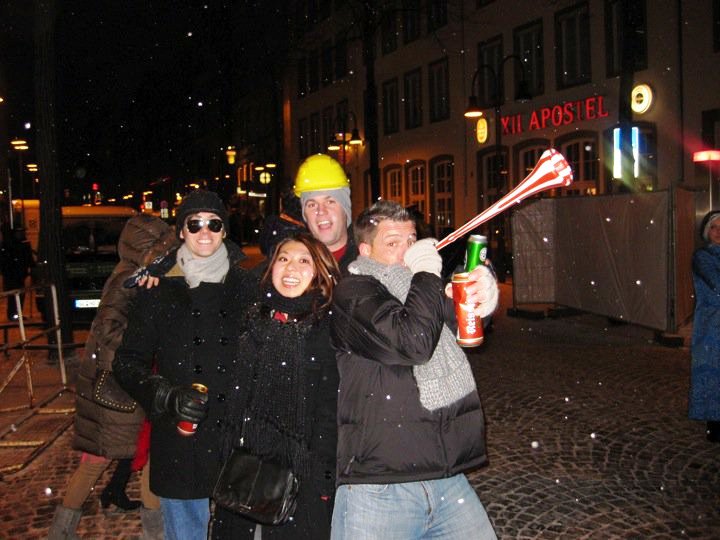 Fran buys a long plastic horn from a balloon vendor. He tries four times before making it blow right. It trumpets through the shop-lined alley like the mating cry of some desperate elk.

We follow the crowd toward the Rhine to the altstadt. The place is packed. Fran, I remember, has this thing about large crowds. We dip into a nook between wiener carts and find a team of latex-gloved surgeons doing the same thing. They ask us “Where are you from?” “What do you do?” “Can we open your chest cavity?” You know—small talk. They hand each of us a bottle of kölsh, Cologne’s regional brew, which, honestly, I can’t distinguish from pilsner.

Before leaving, one of the surgeons pulls out a pamphlet and writes out a prescription that says: Drink Beer. Repeat. 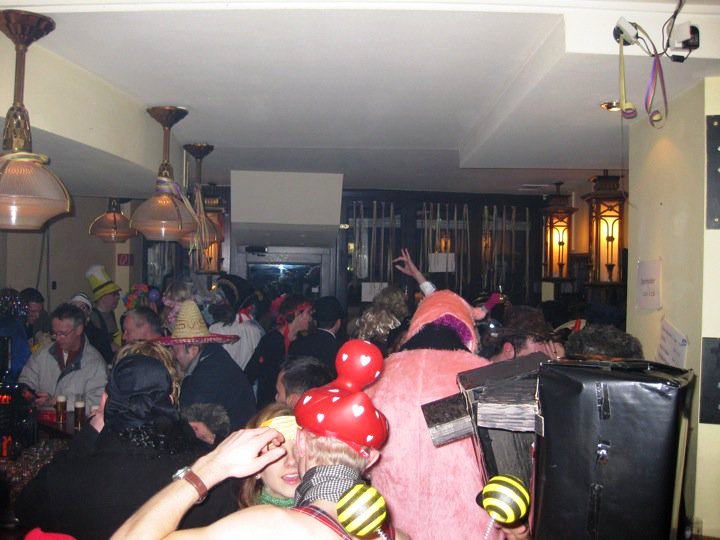 We enter a bar where a conga line is in progress. We follow the caboose to the back and order four kölsh beers. The bartender serves them in a tall, thin 0.2 liter glass called a strange. These glasses show off the beer’s straw-yellow hue, but Fran and Mike have spotted something else: there is a ladybug standing by the bar. Her hair is the color of kölsh, and I already know what Fran is thinking. I’m watching her too, but with curiosity: She communicates only through a coach’s whistle pressed between her lips. I don’t see how this figures into her costume; nevertheless, she is fully committed to it.

Her antennas wobble as she leans over the bar. When the bartender is near, she makes a fluttery warble. The bartender nods and begins filling her glass like a man well versed in interspecies exchange.

As ladybug waits, Fran makes his move. He whispers something in her ear. She turns and blows right in his face. Fran sets his glass down and lifts the horn to her face. He’d won some affection with the crowd outside, but folks aren’t so keen when he blasts it in here.

Ladybug takes a breath and lets it rip. Everyone covers their ears. Fran takes a deep breath, but the bartender comes over and tells them to can it.

A day earlier, Takayo and I showed the boys around our city, Düsseldorf. We brought them to Uerige. Our table was in a low, wood ceiling room flooded in dim, yellow light. It’s the type of place you’d take grandpa for a drink before dropping him off at the hotel.

Altbier originated in Düsseldorf. It’s dark, yet crisp with fruity notes. They sell it in bottles, but its best served at cellar temperature straight from the wooden keg.

The boys got a kick out of how they served the beer. Keeping with the old tradition, the waiters wear aprons and walk around with a metal tray full of glasses. If he sees you have an empty glass, he’ll take it and give you a new one unprompted. Each time they mark your coaster with a pencil.

“It’s like your bill,” said Takayo. “They just add up the tick marks.”

“How do you get them to stop?” Mike asked.

“You put your coaster on top of the glass,” I said.

“So, theoretically,” Fran said, “you could just sit and drink all day without doing anything else.”

“Sure,” I said, “with enough money…and a catheter.”

We leave the bar after the ladybug incident. Fran is fired up now. He blows…and blows…the horn to his lips is like air in his lungs.

Somewhere in the distance his call is reciprocated. Fran blows again. They blow. Fran blows. We listen, and home in on the raucous call that seems to be getting closer.

We walk up the block and stop. Fran blows, and then we turn the corner to find ourselves standing before a group of German youths. When we start talking, they look to each other like they can’t believe their mating calls seduced a group of foreigners.

“Where are you from,” striped shirt asks.

“Obama!” They all shout. 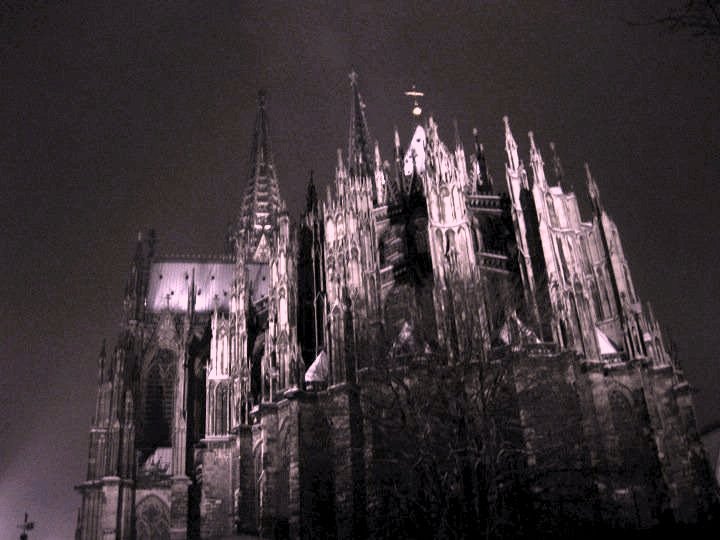 The Dom. Photo by author.

The boys are drinking weizenbier, Bavarian wheat beer, straight from the bottle. Compared to a clear, light beer like Bitburger, wheat beer is cloudy and has a bread-like flavor that you can almost chew on. Das ist gut.

Before moving on, the trio comes together and blows in unison. Beneath the pale glow of the streetlamp, steam rises up from each horn.

Eventually the streets clear out. Ruffled collars and felt hats line the gutter as if Cologne has been stricken by some costume form of leprosy.

We let those serrated spires guide us back to the station.

Inside, fangs of glass crunch beneath our shoes. The platform is deserted. We check the schedule, and can hardly believe it when our train to Düsseldorf arrives on time. Before the doors open, Fran blows the horn one last time, and, somewhere in the distance, we hear the sound of an elk answering, softly.

Here’s how to couchsurf Carnaval in Brasil.

Tagged
Travel Germany
What did you think of this story?
Meh
Good
Awesome

How They Like Their Rock 'N' Roll in Germany

Where To Go for Carnival if You're in Europe

How To Say 'Exploded Eye' in German

Confessions of a Food Snob: I Ain't Eating That Crap

We're All Here To Fart Around

German City Offers $1.1 Million To Anyone Who Can Prove It Doesn’t Exist