The pants hang over the chair back, butt up.

Six inches below the right rear pocket, a rip runs vertically for two inches down the leg. The way the pants hang puckers the rip open. A tongue of white pocket sticks out.

I worry that I shouldn’t wear these pants anymore. People standing behind me can see my boxers through the rip.

People say it’s too touristy, and maybe they’re right. Maybe I like touristy.

But I don’t know this yet. I just walked through the old Spanish gate, followed the wall east a hundred feet where it drops into terraced park space and then the water.

I’m sitting on a rough section of terrace wall. There are six other tourist pairs and individuals—six tourist units. We’re all spaced evenly. We’ve all got our spots. I’m looking out at the water and thinking it’s too bad you can’t see BA from here. It would look pretty cool, hazy sky and skyscrapers.

The rocks of the terrace are rough. It’s kind of painful to sit on them. I do a little seated roll to get up, and I feel something catch on my pants, maybe six inches below my right rear pocket.

Shit, I think. I think I just ripped my pants.

I’m incredulous that I’ve found what I want, in my size, in the first shop I checked, in what people say is the largest market in Latin America.

The pants match the ones I gave away last week. They’re made of the same synthetic, thin, parachutey material, with the same cargo pockets I adore, the same color, with even the same fold in the fabric over the zipper that sometimes lifts up and makes it look like my fly’s down.

I do an awkward probando dance in the back of the shop to verify the sizing of these secondhand pants that came from who knows where to be resold in this backstreet stall of la Cancha. They fit nice. 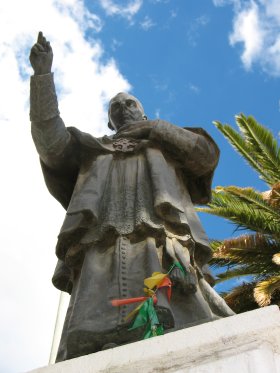 I go outside to the gate, thinking he’s selling fruit.

His face is dark brown and leathery. His hair is dark black and matted. He’s wearing a lot of clothes, and they’re all dirty. He’s not selling fruit.

He says he’s from Peru. I tell him my name’s Enrique, and he tells me they have that name in Peru, but in Peru they shorten it to Rique. I think that sounds cool.

He asks me for money, or food, or something. I’m living in a volunteer house, so I figure I should oblige. Then I get an idea. I run into my room and grab the pants.

The pants are old. They have rips, but I can’t remember their histories. There’s one in the back, beneath a pocket, and a big one under the left knee, like the pants are ready to convert to shorts. I’ve almost thrown them away a couple times.

I run back out and pass the pants through the iron bars of the gate. I tell the man I hope they’re his tamaño. He looks pretty happy, and he starts off down the sidewalk towards Plazuela Sucre.

Back inside, I sit on my bed and feel happy. Then, I feel sad.

My parents and sister flew into Seoul last night, and I have a lot to show them. But the first thing we’ve done is hop on the Green Line to Technomart. I need some pants. 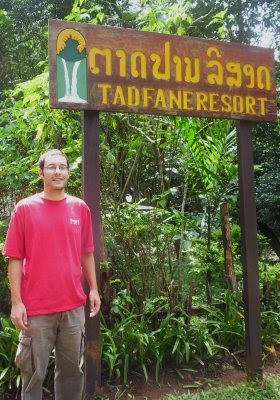 Technomart has the typical Korean shopping mall setup, with a tall, semicircular foyer and escalators shooting up to about ten floors of kiosked shopping. Expats say it’s good for clothes.

On floor 2 or 3, I look through a rack of pants and find a pair I like. They’re brown, made of a synthetic, thin, parachutey material. They’ve got sweet cargo pockets.

My parents, my sister, and I escalator down and exit through the hall with the roasted nut vendors to Gangbyeon station. We get on the subway. It’s almost noon. It’s time for their first Korean meal.

I’m sitting on the subway wearing thin, brown, synthetic pants. I’ll take these pants when I leave Korea to bike Southeast Asia. I’ll wear them through a class 3 typhoon in Hoi An, at an “eco-resort” in Laos and a lakeside hostel in Phnom Penh. They’ll be in my pannier in Bangkok, Kuala Lumpur, Singapore, Honolulu. I’ll dresser them in Portland, Maine. I’ll wear them at campsites in Nova Scotia and on top of pyramids in Mexico. I’ll pack them, rips and all, to South America. I’ll wear them in Cuzco, in Copacabana, in Cochabamba. I’ll give them to a Peruvian beggar on Calle Bolivar, and replace them with a pair I find in la Cancha. I’ll look at the replacement pair hanging on a chair in about five years and feel things I can’t really explain.

But I don’t know this yet. I’m sitting in a subway car with my family. I’m about to introduce them to kimchi.