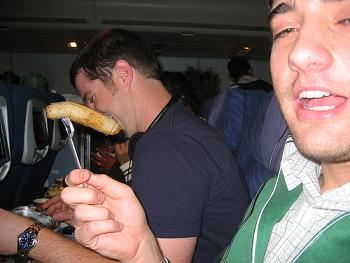 As someone who spends lots of time in airports and airplanes, I got a good laugh out of Matador writer Liv Hambrett’s “10 Constants of Air Travel.” Take a look at her list and see how many of these things you’ve experienced on your most recent flight:
*

The Seat Hogger has no qualms in taking both arm rests, sitting with their legs spread far wider than common decency suggests and lolling into your personal space when they fall asleep, head back, facing you. The Seat Hogger may be sitting behind you, and feel it necessary to put one foot on either arm rest, thus tickling your elbows with their bed socks. The Seat Hogger is a shifty being, so always be assertive in reclaiming your precious space. Do not let it be usurped.

No matter what airline you are flying with, it’s there. Like something out of an RL Stein novel, it nestles in next to the scrambled eggs, or ‘bacon’: It is The Breakfast Sausage.

Indeterminable ingredients, indeterminable, texture and indeterminable taste. I have eaten a breakfast sausage, once, and felt sub -human for days, like I had eaten something alien and it had made a home in my stomach. The Breakfast Sausage deserves its place on this list for its unwavering support role on the breakfast tray.

Some airlines feature more of these stalwarts on their team than others, but there is always one. There has to be, to off set the Too-Nice Flight Attendants (see below), to whom nothing is ever, nor ever will be, a problem. The Nasty Flight Attendant sighs when you request a thimble of faux orange juice (also see below), or is quick to snatch back the headphones as you prepare to land.

Although I’m loathe to complain about people being too nice, particularly people who may have to serve you for the next 14 hours, the Too-Nice Flight Attendant can become unnerving. The constant smile, the bouncy walk, the wide eyes. Around hour seven of a long distance flight, this continuous delight in everything aircraft, combined with the onset of long-haul-flight-delirium, begins to play out like a scene in “Fear & Loathing in Las Vegas.” You begin to yearn for the normality of the Nasty Flight Attendant.

The worst type of hogger/passenger. The Bathroom Hogger is only really familiar to the poor sods whose seats are right outside the bathrooms, seats which are akin to torture on any flight that exceeds two hours. The Sydney-LA flight, seated outside the bathrooms? Hell. The Bathroom Hogger will either try to mix it up and patronise the bathrooms at either end of the section, or proudly utilise the same cubicle every time. Neither situation is a winner. The best you can do is keep a miniature bottle of fragrance in your bag and hope to God you’re not near the bathrooms.

The Annoying Child can take on a variety of forms; it can be the little baby who won’t stop crying, the three year old who won’t stop running up and down the aisles, or the six year old who can’t control the volume of its voice, particularly when lights are out, curtains are drawn and eye patches are on. Whichever Annoying Child may be on your flight, chances are the exhausted/oblivious parent will do little to appease the situation, particularly if the child running up and down the aisles means time out for the parent.

The Snorer doesn’t even have to be next to you. In fact, chances are The Snorer will be several rows down, and the noise will blanket the entire cabin, treating all passengers to the dulcet tones of their faulty adenoids. Unless you fall asleep before The Snorer, there is little chance you will get any sleep on the flight, unless you had the foresight to pack ear plugs. Otherwise, headphones plugged into easy listening is your only option.

8. The Movie You Really Want to See but Can’t Hear

On a long distance flight (so, every flight out of Australia) your one saving grace is the in flight entertainment system and a good book. Inevitably, out of all the movies offered, there is one you’re genuinely desperate to see. Perhaps you missed it at the movies, and you thank God two hours of the flight are taken care of. And then you plug in your headphones and discover it is the one movie in the entire program that has audio problems. You are thus resigned to watching the two offered episodes of “The Office”, on repeat.

Faux orange juice, served in half full plastic thimbles, is a total staple of air travel. However, what has to be addressed is the simple dietary issue that sugar dehydrates and nothing is more sugary than aeroplane juice. So you drink it like it’s going out of fashion and dehydrate yourself even further, so much so that the next time the flight attendant passes by with a tray, you clamour for more, unaware it is directly contributing to your papery skin and cotton mouth.

The Bizarre Neighbour will always attempt to engage you in conversation, will reveal an uncomfortable amount of detail about themselves without being asked and will make a two hour flight seem like a lifetime. The bizarre neighbour is almost statistically unavoidable, particularly if you are a frequent flyer. You have no choice but to enter the realm of weirdness for the duration of the flight and engage in conversation or wear your eye mask for the entire flight. If all else fails, feign deafness.

Have you experienced these constants of air travel? Would you add any to Liv’s list? Share your experiences below!