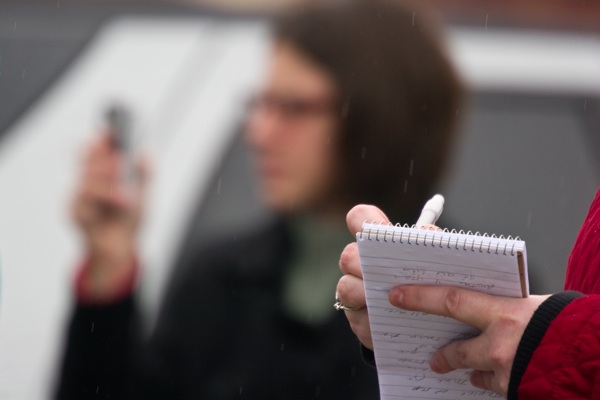 In light of the fact that we’ve just opened the application period for Glimpse correspondents, it seemed appropriate to introduce you to some of the professional journalists in the Matador Travel community.

I don’t know how often you browse through the profiles of fellow travelers in Matador’s travel community, but do it more often: there are thousands of incredible people just like you waiting to share their stories and experiences.

Some of them, though, happen to do so for a living.

In light of the fact that we’ve just opened the application period for Glimpse correspondents, it seemed like a good time to introduce you to some of the professional journalists in the Matador Travel community.

Francisco’s hometown is Ciudad Juarez, Mexico… one of the least safe places for journalists on the planet.

He currently lives in El Paso, where he is a journalism student and a reporter for a local Spanish-language newspaper.

Alexis Grant, a regular Matador contributor, graduated from the Medill School of Journalism at Northwestern University, worked as a reporter at the Houston Chronicle for three years before taking a temporary leave from the profession to backpack around Africa.

Her trip gave her plenty of writing material–so much so that she spent the period following her return from the trip writing a memoir about it. Her memoir finished, she’s now looking to pick up where she left off as a journalist. You can read more about her in this interview or on her blog.

And don’t forget Matador contributor Sarah Shourd, one of the three Americans detained in Iran. Learn more about how you can help the effort to free Shourd and her friends in “5 Things You Can Do to Help Free the Hikers.”

Conner, an American expat who has called Cuba home for just shy of a decade, has written a whole shelf of guide books and other travel-related articles for publications like Cuba Absolutely and others, but her day job is working as the senior editor of the MEDICC Review, “the only peer-reviewed journal in English dedicated to Cuban health and medicine.”

She recently returned from a trip to Haiti, where she reported on Cuban doctors’ work in post-earthquake Port-Au-Prince. Keep up with her on Twitter or her blog.

Andrew, a recent arrival to the Matador community, describes himself as a travel journalist who “focuses on the coasts of the globe,” filing stories for surfing publications.

His mission? To “help Americans understand that the world is not flat, and that three miles off our coasts the ocean does not, in fact, drain off in some Niagra fashion into the deep of space.”

Friend him up here on Matador and follow his blog.

Mei-Ling is a long-time Matador member who lives in London, where she works as a journalist and producer. Much of her work has focused on human rights issues, and she has collaborated with the International Red Cross and the Human Rights Watch Film Festival.

Are you considering a career in travel journalism? Read Sarah Stutteville’s article “To Be (or Not to Be) a Travel Journalist” for some first-person insight on the profession.