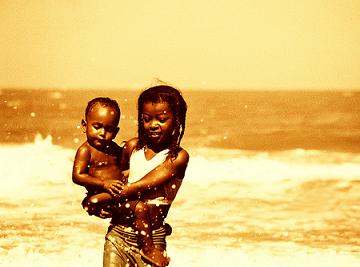 A few years back, my husband and I had some Spanish teachers over for dinner. They were lovely people and we’d enjoyed a spirited conversation about Latin American politics and culture… until one of the teachers looked at Francisco and asked him earnestly, “Do you consider yourself black or Cuban?”

Without pause, he replied, “Both.”

The teacher pressed on, confused, it seemed, insisting that he “must” be one or the other. How could he be both? And anyhow, how were there Blacks in Cuba and in every other country south of the U.S. border? (The answer: A prosperous slave trade throughout the Americas).
*
I’ve long nurtured an interest in Afro-Latin/Afro-Hispanic culture. One of my travel dreams is to wind my way through Latin America to document the stories of Afro-Colombians in La Boquilla, Afro-Mexicans in Costa Chica, Afro-Ecuadoreans in Esmeraldas, and Afro-Nicaraguans in Bluefields.

It seems like the world outside Latin America is finally beginning to take notice of Afro-Latin communities. A recent article published in Newsweek’s international edition describes “a black-consciousness movement stirring in Central and South America.”

This week, CNN aired a six-hour series called “Black in America,” focusing on far more than the U.S. Civil Rights Movement and giving at least a cursory nod to the fact that a sizeable Afro-Latin community exists.

I expect we’ll all be learning a lot more about these marginalized communities as the topic suddenly becomes popular.

Watch this documentary about race in Brazil aired by Wide Angle or check out this series of Miami-Herald articles, “Afro Latin Americans.”