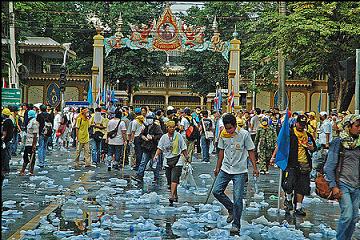 Earlier this week, anti-government protesters stormed Suvarnabhumi International Airport and Don Muang, the domestic airport, forcing both facilities to shut down. All flights have been cancelled.

The past few days have been rife with rumors of army movements into the city, riot police ready to disperse crowds, and the dreaded c-word: coup. Tanks have been seen in key protest areas but so far, no violence has broken out.

Embattled Prime Minister Somchai Wongsawat has declared a state of emergency. On Friday, police ordered protesters out of both airports “otherwise law enforcement officers will carry out appropriate and necessary measures to solve the situation,” heightening fears of bloody confrontation.

What does this mean for travelers?

Thousands are stranded here, waiting out the crisis in hotels. Some have been able to leave by traveling to alternative airports in Phuket, Kuala Lumpur, and Singapore.

Airlines also began flying passengers out from Utapao Air Force Base, a Vietnam War-era military airport about 3 hours’ drive from Bangkok. Utapao is also allowing some incoming flights to land.

Thailand’s Ministry of Tourism and Sports has apparently approved a stipend of 2,000 baht (about US$56) per day to assist those stranded in the city.

The US State Department recently issued a travel alert on Thailand. The country has also made the list of the Most Dangerous Places compiled by the Telegraph, putting Thailand behind Iraq, Afghanistan, and Chechnya.

Approximately 30,000 visitors fly into Thailand via Suvarnabhumi each day; the loss of tourist dollars is staggering and given the above warnings, the extent of damage to the travel industry has yet to be gauged.

For the latest developments, check out the Bangkok Post or the Nation newspapers. For background information on the protests in Thailand, click here.