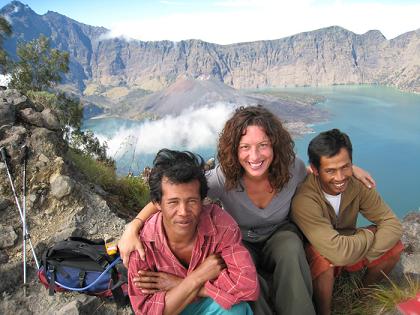 I’ve said it before, but it bears repeating: Matador members are incredible people.

They travel not just to see the world, but to take in what they see and then act as agents of positive change.

She’s a regular contributor to the Matador Network… her most recent article, “The Ultimate Baja Escape,” left me ready to step away from the computer, get behind the wheel, and get on the road.

She’s a TV and film producer… currently, she’s on location in Kentucky, where she’s also found time to munch her way around Louisville (she’s a food critic in all her spare time. About Louisville’s eats, she says, “I’ve had some of the best food in my belly’s career here.”)

She also produces Pilates retreats in Isla de Mujeres each year–I’d give you the link for the next one, but it’s already sold out–, drives her solar powered travel trailer around the Americas, and sails her boat on the world’s seas.

And oh, she’s just launched phase 1 of her NGO– Fourth World Love. There’s a million things to say about 4WL, and you should definitely check out its website, which channels the Misty vibe just like any other project she pioneers. But the big announcement she’s asked me to make is this:

DONATE $100 and you can not only provide funding for the next phase of her project–which helps kids in Indonesia–you can also win an expenses-paid trip to Indonesia to see 4WL in action, snorkel in the ocean, trek a volcano, and, I’ve got no doubt, eat some seriously good local food.

That’s her up above in the photo, by the way–and I’m pretty sure that jaw-dropping, eye-popping scene in the background is where you’ll find yourself next spring if you win her contest.

Learn all about it here.