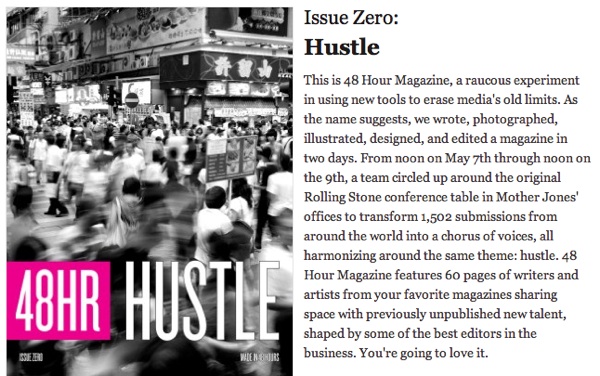 One of the more interesting projects that came to the attention of Matador editors in recent weeks was 48HR Magazine.

Here’s the idea behind 48HR Magazine:

A group of writers, editors, and new media professionals decided to get together and crowdsource a magazine that would be produced in 48 hours. By putting out a call on Twitter, the group behind 48HR Magazine would generate buzz for a couple weeks before unveiling the theme of the first issue: hustling.

The theme was sent to all writers who signed up for 48HR’s news alerts and the challenge was for them to turn around a piece within 24 hours; the editors, in turn, would review all submissions, select pieces for inclusion, and then produce a real magazine–a digital version and a print version–within the next 24 hours.

More than 1,500 writers submitted pieces about “hustling,” among them Matador Sports editor, Adam Roy. And of the 70 pieces selected for publication, Adam’s was among those, too.

Adam’s piece, “How to Be a Better Liar,” is available in the print version of the magazine, which can be purchased for $10 USD from MagCloud.

To learn about other interesting writing and new media projects, be sure to check Matador’s The Travelers Notebook, our blog about all things media-related.

More Than Spaghetti: Can You Identify These Lesser-Known Pasta Shapes?