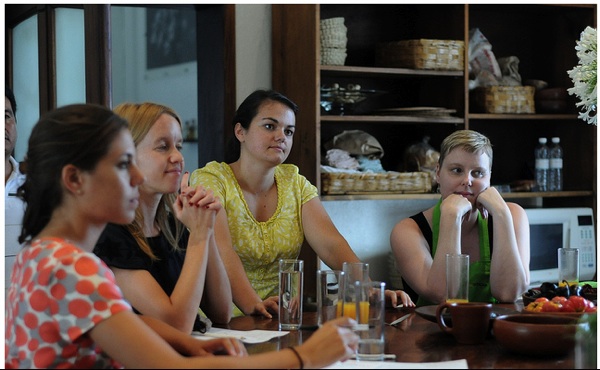 How did you originally learn about Matador?
Upon getting familiar with other travel bloggers and searching for that which interested me, Matador organically came into view. I thought Brave New Traveler was a clever title and a concept that really attracted me.

I didn’t aim for Nomadderwhere to be a consumer travel blog, so the stories about “why we travel” spurred my own musings and made me pleased to know those stories were appreciated. Thus began my avid interest in Matador.

What is your role with Matador?
Since April of 2010, I’ve been a member of the MatadorTV team, scouting out the Internet’s top travel videos and formatting them for the site. I also reach out to the video producers, occasionally create content for the vlog, and promote with social media. It’s a gay ol’ time.

Tell us about your background, academically and professionally. Did you study film/video production formally?
I loved photography and attended university with the intention of studying the crap out of it; however, a new zest for travel documentation (not to mention an extreme dislike for a photography teacher) led me to realize I couldn’t quite say all I wanted to with photos.

Luckily, my major wasn’t specific to photography but all studio art. I grew to love drawing, ceramics, graphic design, and many other media that allowed me to translate my artistic voice. Enter multimedia as my new obsession.

I traveled on a round-the-world trip after graduation with the intention of documenting the experience and found real satisfaction in doing so. This prepared me nicely for receiving the STA Travel World Traveler Internship in the summer of 2009. Post-internship, I returned to Fiji, the first stop on the itinerary, to attempt creating a volunteer project in a highland village, all the while still snapping shots and editing videos like a maniac.

I wasn’t a product of a film program (though it crossed my mind when looking at colleges), but I organically found a knack and necessity for production in my life. To this date, I’ve made over 130 travel shorts, and anyone can see my gradual progress on YouTube from my first Windows Movie Maker slideshows to my more recent Final Cut Pro mini-films. It was simple practice and experimentation, all fueled by passion. It would have been incredibly beneficial to attend film school, but for now I’m sustaining myself by constantly learning from others and self-teaching new techniques (hence one of the many great benefits from working for MatadorTV).

What’s the project you were just working on in Mexico?
All that traveling and documentation ended up crafting me into a traveling film producer. That was a real shock after feeling like a valueless vagabond for years. My worth was finally recognized by ProjectExplorer.org, a non-profit based out of New York City, which creates free educational travel series for children. We actually found out about each other through Matador.

After seeing a profile of their Good Global Citizen campaign on Brave New Traveler, I soon wrote about the concept on my blog, and because of a trackback, Jenny, the director of the organization, encouraged me to get involved and eventually apply for a position.

During the month of June, I traveled as a crew member for ProjectExplorer.org throughout Mexico City, Oaxaca, and Merida. We spent our days the way I’d imagine our boy, Tony Bourdain, and his crew do: writing, filming, crafting on-screen appearances, photographing, and producing content for the web while continuously marketing our concept through social media.

After three weeks of on location production, we returned to our respective homes to begin with post-production video editing and community outreach. Thus far, I’ve already produced over 40 short educational films for the organization and hope to present the ProjectExplorer.org resources to my former schools.

At the moment, our next travel series is between Rwanda, Thailand, and India, which is determined by student/teacher interest as well as the level of support from each country’s tourism board. I’ll be pumped wherever we go. The real thrill for me is just to move and teach through multimedia.

What are some of your short/long-term goals?
Had I concocted a plan during high school or college for this portion of my life, I don’t think I would have landed where I did. I stick with the no-plan plan most days.

Short-term goals: I have dreams of writing a relevant travel narrative. I’m also interested in developing my film skills with some sort of intensive structure alongside brilliant minds.

Long-term goals: To stay alive for a while.

Any favorite travel anecdotes?
My most moving and memorable travel moments are all similar. They are either relatively mundane and involve social interaction or are centered around mountains. Dancing with one friend on the beach in Zanzibar, watching “Indian Idol” with some new friends in Delhi, driving through an intense bloom of yellow butterflies – those are some of the small scale favorites. Seeing Mt. Everest from a hill near Darjeeling (107 miles away from the peak) was a top-tier experience.

“I have a really hard time valuing certain experiences over others, because my travel incentives aren’t destinations but challenges.”

I have a really hard time valuing certain experiences over others, because my travel incentives aren’t destinations but challenges. I just don’t like to have it easy. If I’m peeing on the side of the road in the African bush or freezing my toes off at high altitude, I feel like I’m sharpening my blade and succeeding at something. Those are the memories that stick.

What do you predict to be the role of film/video in travel narratives over the next couple of years?
I love written word. It’s the crux of travel documentation, and I think the freedom the reader has to make the experience their own is incredible. However, I’m finding, especially in my own travel blogging pursuits, that people yearn for the dynamism of video. It’s also much more accessible and motivational for the largest amount of people. It’s likely there will be a shift in how the majority of people concoct their stories from the road. Maybe industries will collide in a more obvious way: music and travel, tourism and film, etc.

Anticipating the future isn’t one of my strong suits, but hopefully, the use of video in travel narratives will remain about artistry and storytelling, not so much about timing, inaccessible technology, or marketing.

39 of the most breathtaking natural wonders in the world
Drink your way across Texas wine country on this Christmas wine train
How to plan for 2021 travel in the age of COVID, according to 23 travel agents
For the perfect day of hiking and Colombian coffee, head to Jardín
The spookiest mythical creature in every country in the world