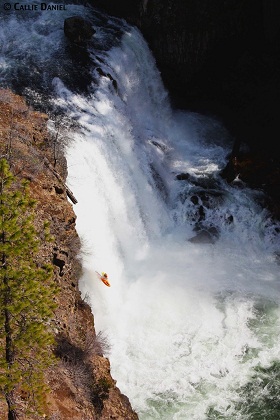 This photo and more by Callie Daniel.

FOR THE PAST FEW WEEKS rivers have been rising and dropping up here in Nor Cal. A gauge I always keep my eye on is the McCloud river about 25 mins outside Mt. Shasta. During the middle of last week I saw it was on the rise and tried to rally the troops. Unfortunately everyone has a life or something and can’t drop everything to come huck a perfect 50 footer, so I weighed my options. It was pretty clear the flows were going to peak Thursday and I was pretty sure there wouldn’t be another chance for me to run it this year.

With those facts in mind I rallied out with Callie and my father to check out the falls. When we arrived at Middle Falls Thursday (April 28th) around 4:00pm it quickly felt different from my previous experience there with all the boyz a couple years ago. I looked at it from the top viewing platform and it looked like a little more than half the flow we had during the the previous record high descent in 2009. Dream flows peaked at just over 1700 cfs @ the reservoir that morning. We walked down to the base of the falls to get a better look. From there I saw a really solid line with a great boil at the bottom and felt confident it would be good to go.

As I was getting changed I realized I forgot my Canyoneers (standard rookie sh#t) but decided to give er anyway since the flows were peaking. The only thing I had to wear were my Sanuks which were a little sketchy on the hike in but all in all much better than nothing. After getting geared up I handed my Dad a throw rope and showed him were I wanted the most moral support as I knew a throw bag wasn’t going to do much if sh#t hit the fan.

As my Dad hiked down to the bottom of the falls, I set up a trip pod and got Callie dialed for photos. During the hike down above the falls, I found myself thinking about the crew from the last trip and how much I was missing that camaraderie. As I got into my kayak I gave Callie the thumbs up and she confirmed with the “safety” we were good to go. I peeled out the eddy and started stroking for the lip. Came off a little far right but was able to get a good stroke off it stomping it down to a 45. 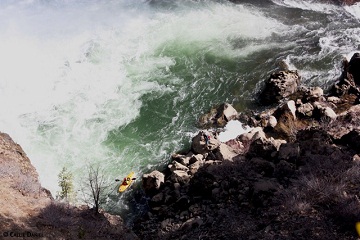 A quick offside roll at the bottom and I paddled away from the right wall with a successful descent. The priceless look on my Dad’s face was probably what made the day but being able to fill the line I saw in my head, without the support of any other paddlers, was a big step forward for me. It was a perfect training session before our big trip to Japan going down in 7 days, plus after finally getting that waterfall off my mind I may actually be able to get some school work done. Look for the footage to be featured in my new film Slippery When Wet coming out in July. Big thanks to my Dad and Callie for providing the support needed to make this happen!