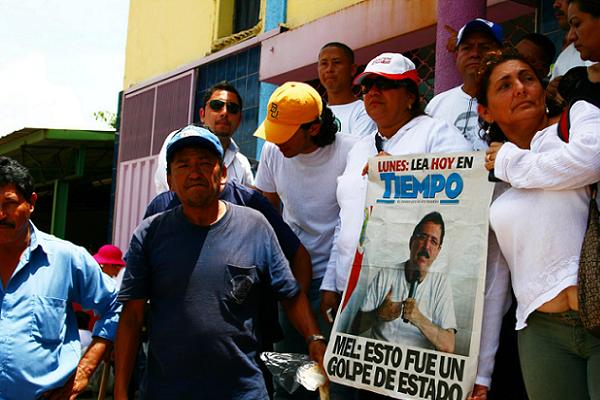 Was the military’s action in this weekend’s removal of Honduran President Zelaya a coup? Many analysts say yes. And many–including some Matador readers–say no.

After publishing a breaking news article about the military raid of Honduran President Zelaya’s home, his ousting, and subsequent pajama-clad plane ride to temporary exile in Costa Rica, Matador editors received some thoughtful comments and e-mails about the developing political situation in Tegucigalpa. We also continued to monitor news reports, both from mainstream media and the blogosphere, comparing viewpoints that were often at odds with one another.

Matador CEO Ross Borden came across this posting, in which someone claiming to be Honduran emphatically declared that the event was not a coup. One Matador reader wrote to say he was glad that the military had “kicked his [Zelaya’s] ass out.” Folks were afire on Twitter, too: “There was no coup.” “We didn’t have a coup.” “Honduras did not have a coup on Sunday the 28th.”

All the chatter sent us back to the dictionary to look up the definition of a coup, and here’s what the Oxford English Dictionary yielded:

“a sudden violent seizure of power from a government.”

The definition says nothing about the motives of such a power grab, nor does it confer judgment on whether a coup is “right” or “wrong.” Instead, it suggests four specific criteria or conditions: the degree of swiftness (sudden); the type of force used (violent); the wresting of authority from one entity by another (seizure of power); and that the entity from which power is wrested is the government, which, in this case, was elected democratically.

What can we take from this definition in our analysis of the current political situation in Honduras?

The events that occurred over the weekend were, based on the information we have now, indeed a coup. Regardless of one’s feelings about the politics or legitimacy of the referendum President Zelaya had proposed to extend term limits (a referendum, I might add, that has similarly been proposed by New York City Mayor Michael Bloomberg and which resulted neither in a coup nor in conspiracy theories about leftist governments, though it was not without criticism), Zelaya was removed from his home in a military exercise that was clearly hostile according to this report by The New York Times.

Today, President Zelaya appeared before General Assembly of the United Nations, where he was received with support from the body that passed a resolution that “condemned the removal of Mr. Zelaya as a coup and demanded his ‘immediate and unconditional restoration’ as president.

Zelaya indicated he plans to return to Honduras on Thursday, potentially escorted by other world leaders and heads of state who support the resolution of the underlying political questions in a democratic, peaceful manner.

Now that we’ve had our semantics lesson, can we stop debating whether this was or wasn’t a coup and get back to some real dialogue?

I felt safer traveling to Aruba during the pandemic than I have in the United States in months
How to plan for 2021 travel in the age of COVID, according to 23 travel agents
Everything Americans need to know about traveling to Mexico right now
7 countries you can’t enter if you have a DUI
13 airports where you can get tested for COVID-19 in the US

Flying is safer than grocery shopping, according to new Harvard report