With such a diverse range of cultures, geography, architecture, and natural beauty in such close proximity, Europe has everything you could possibly want in a fall adventure. But with so many countries to visit, so much food to eat, and so many city names to mispronounce, it’s tough to know where to start. A group of friends and I recently rented a van and drove across Europe, aiming to get the full fall experience in seven different countries. Here is the beauty we witnessed. 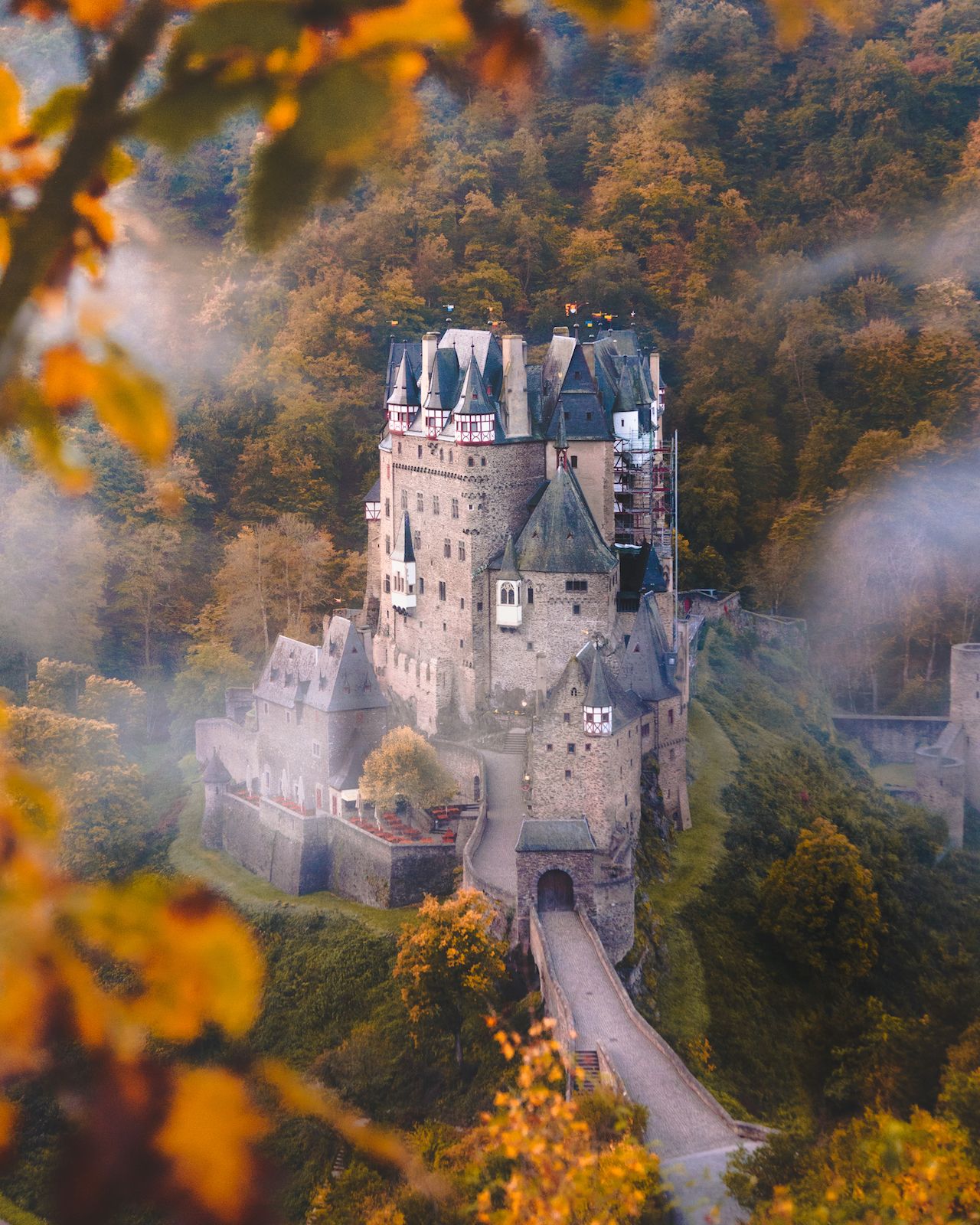 While there are certainly no shortage of beautiful, medieval castles in Germany, Burg Eltz is among the most memorable. Located in the lush Moselle Valley along Elzbach river, this castle was completed in 1540, and is one of the few in the area that is perfectly preserved. There are dozens of hikes available around the castle, including the popular Eltzer Burgpanorama trail, which is particularly scenic. Castle tours are conducted every 15 minutes in German, although French, Dutch, and English tours are also available on a more limited basis. 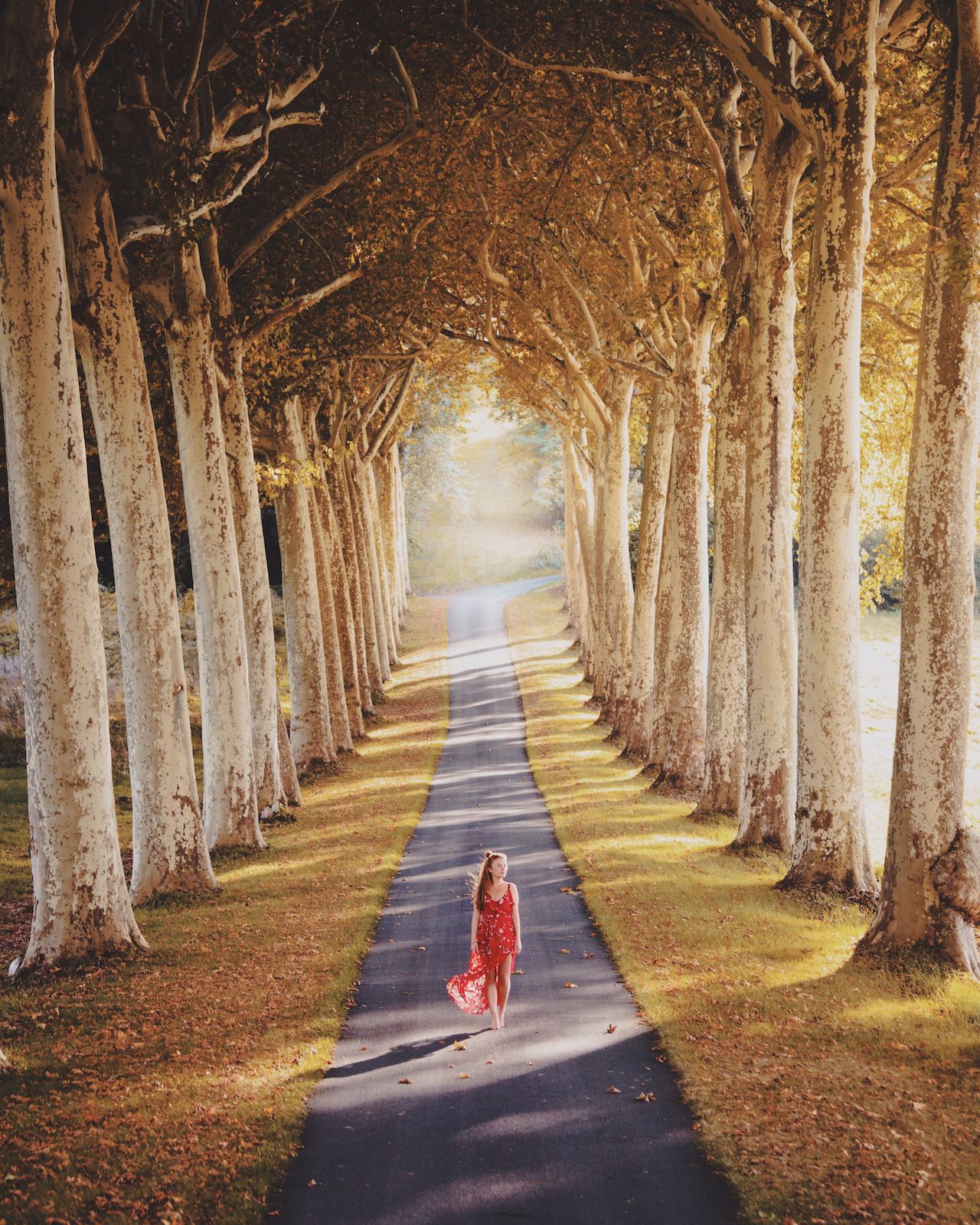 After a few days of exploring Paris, we traveled east toward the German border, where we spotted an incredible tunnel of huge trees just outside Chemin. A lonely country house sat at the end of a leaf-covered road, making for a truly perfect fall setting. 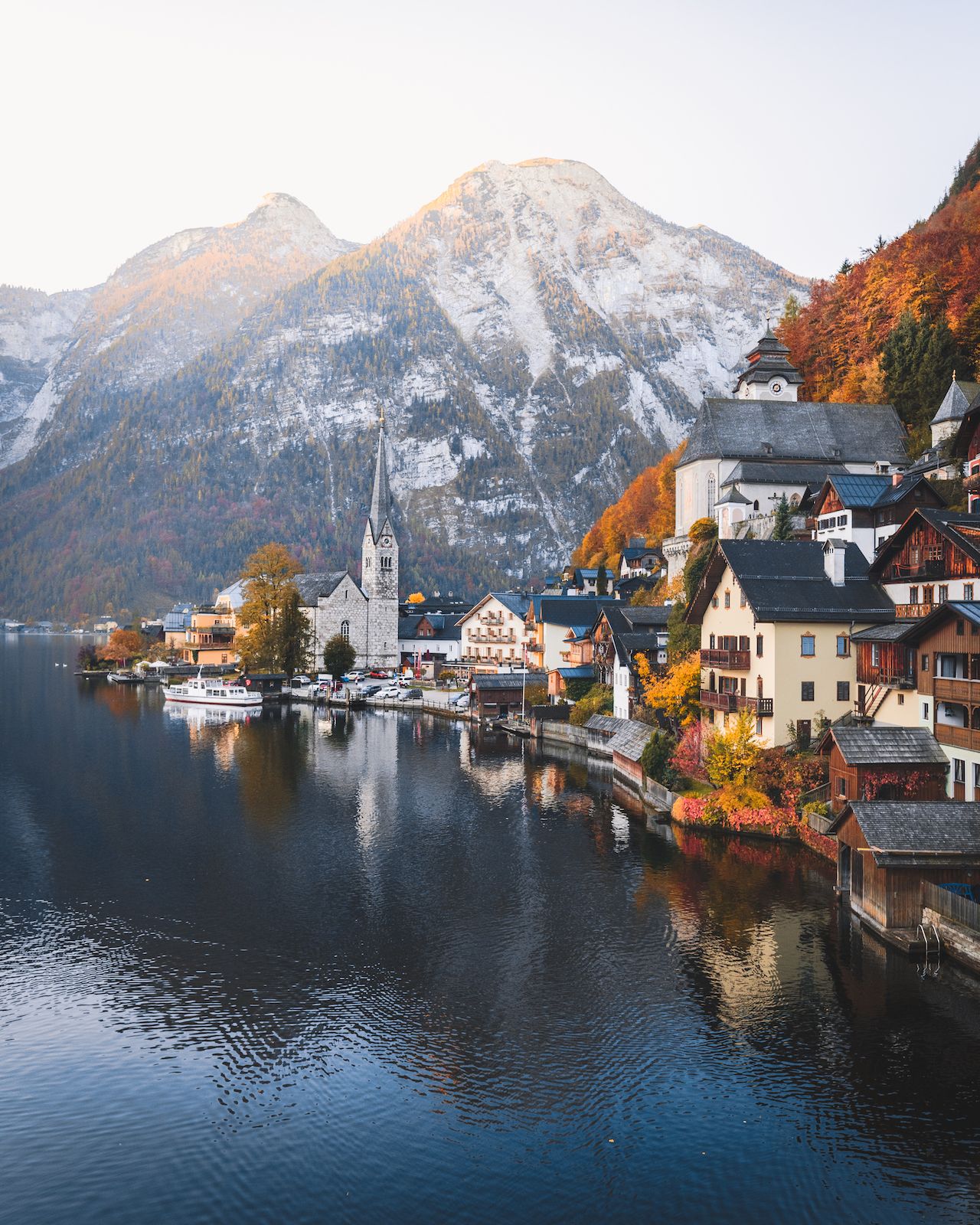 Located between the mountains on Lake Hallstatt, the town of Hallstatt in Austria looks nothing short of perfect. Dotted with 16th-century homes and filled with cafes, there are few places more peaceful. For hiking enthusiasts, there’s a trail leading to the Echern Valley glacier garden, where you can see glacial potholes, the Waldbachstrub Waterfall, and a funicular railway leading up to an old salt mine. The village of under 1,000 residents is just over an hour’s ride from Salzburg, although you’ll need to park out of town, as Hallstatt itself is refreshingly car-free. 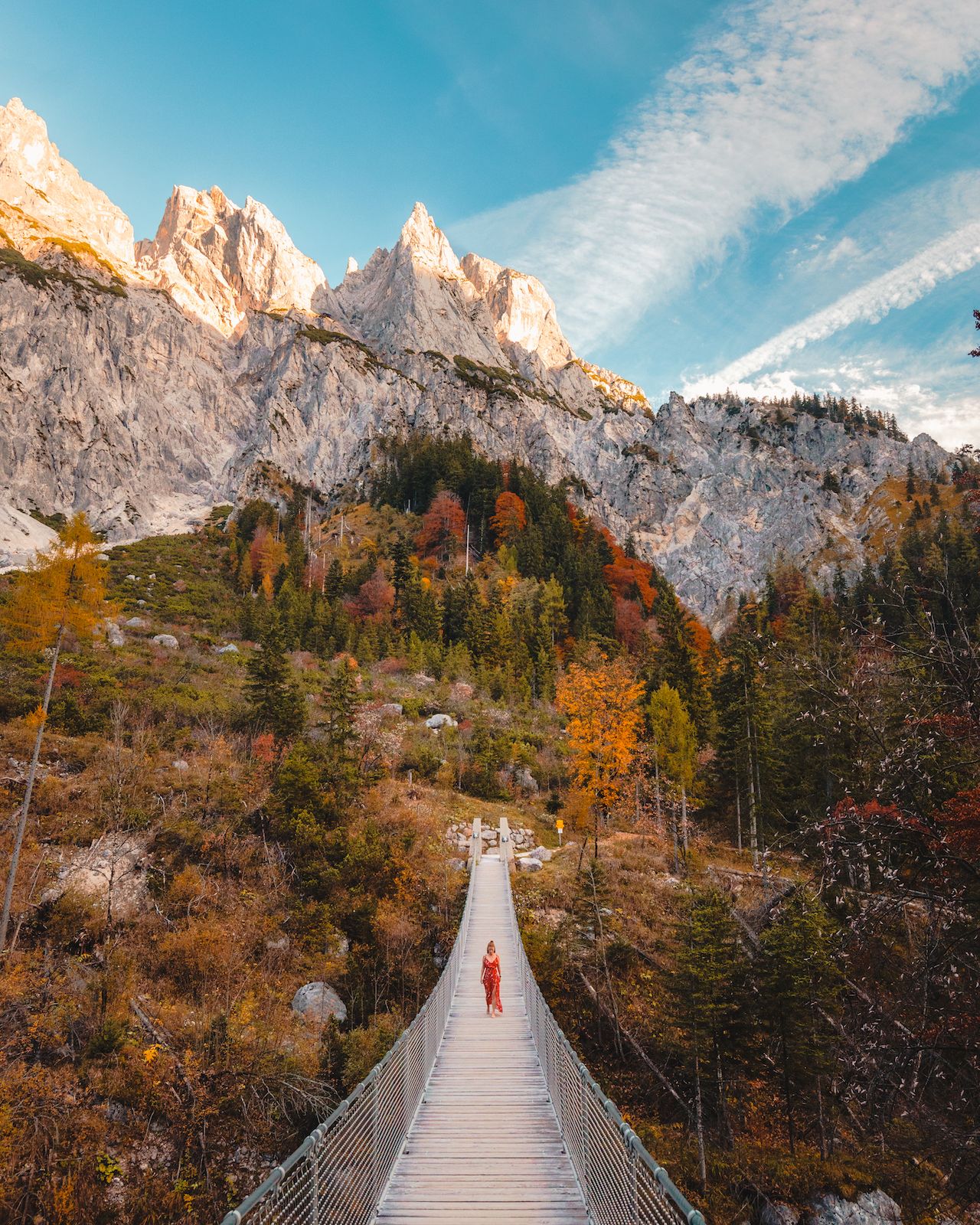 Berchtesgaden National Park is located in Upper Bavaria, covering 81 square miles. The bridge in the picture above hangs over the Klausbachtal Valley and provides stunning alpine views and an array of popping fall colors for those who cross it. You can get more epic vistas by hiking the Watzmann mountain (the highest in the park at nearly 9,000 feet), and exploring Lake Königssee, which is considered to be the cleanest lake in all of Germany. 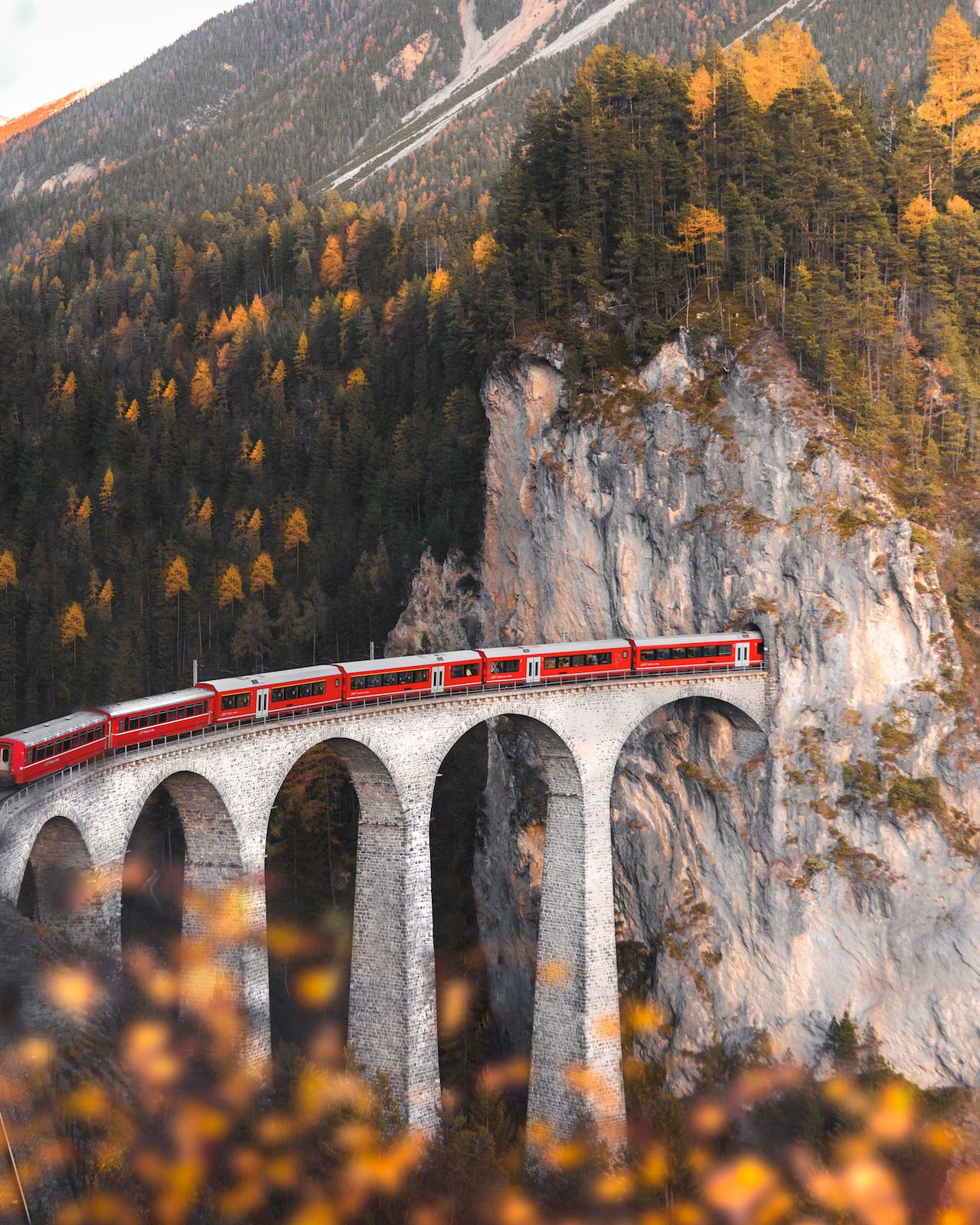 The Landwasser Viaduct on the Rhaetian Railway in the Albula is only a 30-minute walk away from the village of Filisur. Completed in 1902, the bridge is 213 feet tall, with six arches that are each 65 feet long. Completely surrounded by the Alps, the Rhaetian Railway, a World Heritage Site, passes through 144 bridges and 42 tunnels. 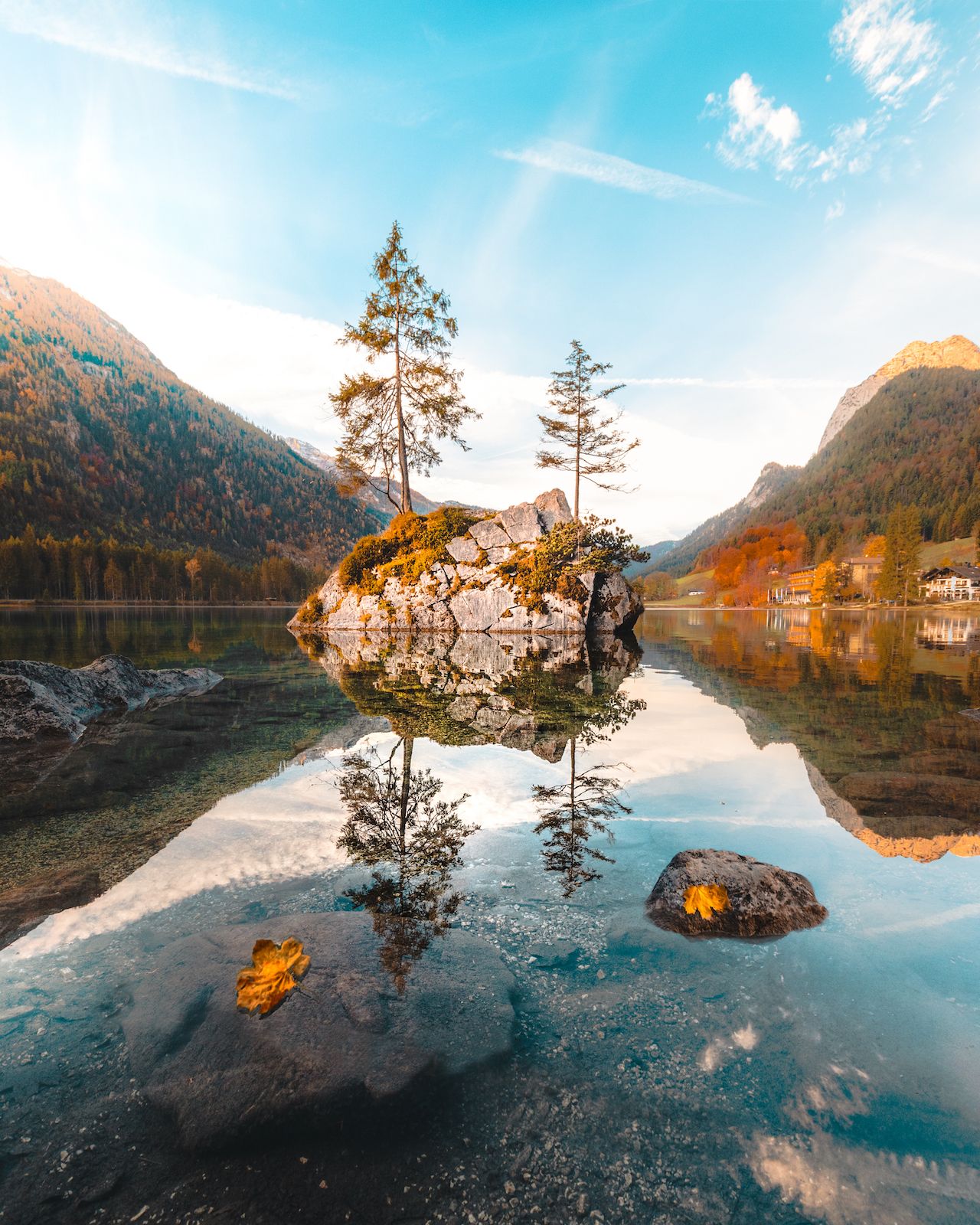 Located in the small town of Ramsau, Hintersee Lake is another great spot in the Bavarian Alps. The most scenic route to the lake is walking along a path through the Zauberwald (Enchanted Forest), and beside a mountain stream. Hintersee itself is perfect for boating, but strolling along its edge and basking in the view of the surrounding alpine peaks is pretty darn good, too. If you’d like to see the landscape as captured on canvas by famous artists such as Carl Rotmann and Ferdinand Georg Waldmüller, you can take an art-themed hike around a lake called the Painter’s Road — the trail is lined with paintings. 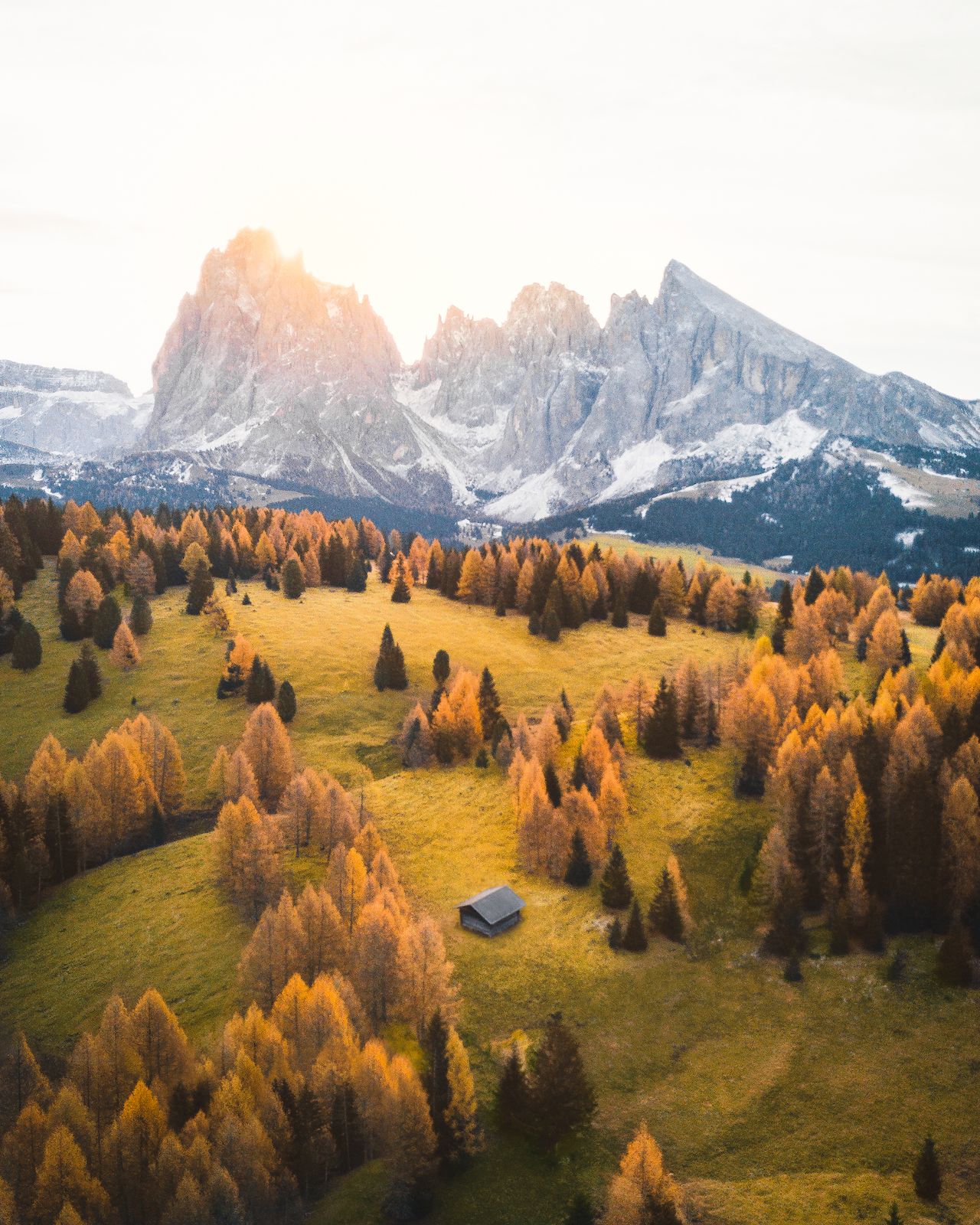 Europe’s largest mountain plateau, the Alpe Di Siusi in Italy’s South Tyrol, is the perfect place for an autumn hike or bike ride. With views of the Dolomite peaks, the area also has small forests and a smattering of settlements. The largest is called Compatsch, on the western side of the plateau. It serves as the perfect base camp for your Alpe Di Siusi trip, with hotels, restaurants offering traditional South Tyrolean cuisine, and a cable car up to one of the nearby mountains. If you’re visiting later in fall, or winter happens to come early, the area is also ideal for downhill and cross-country skiing. 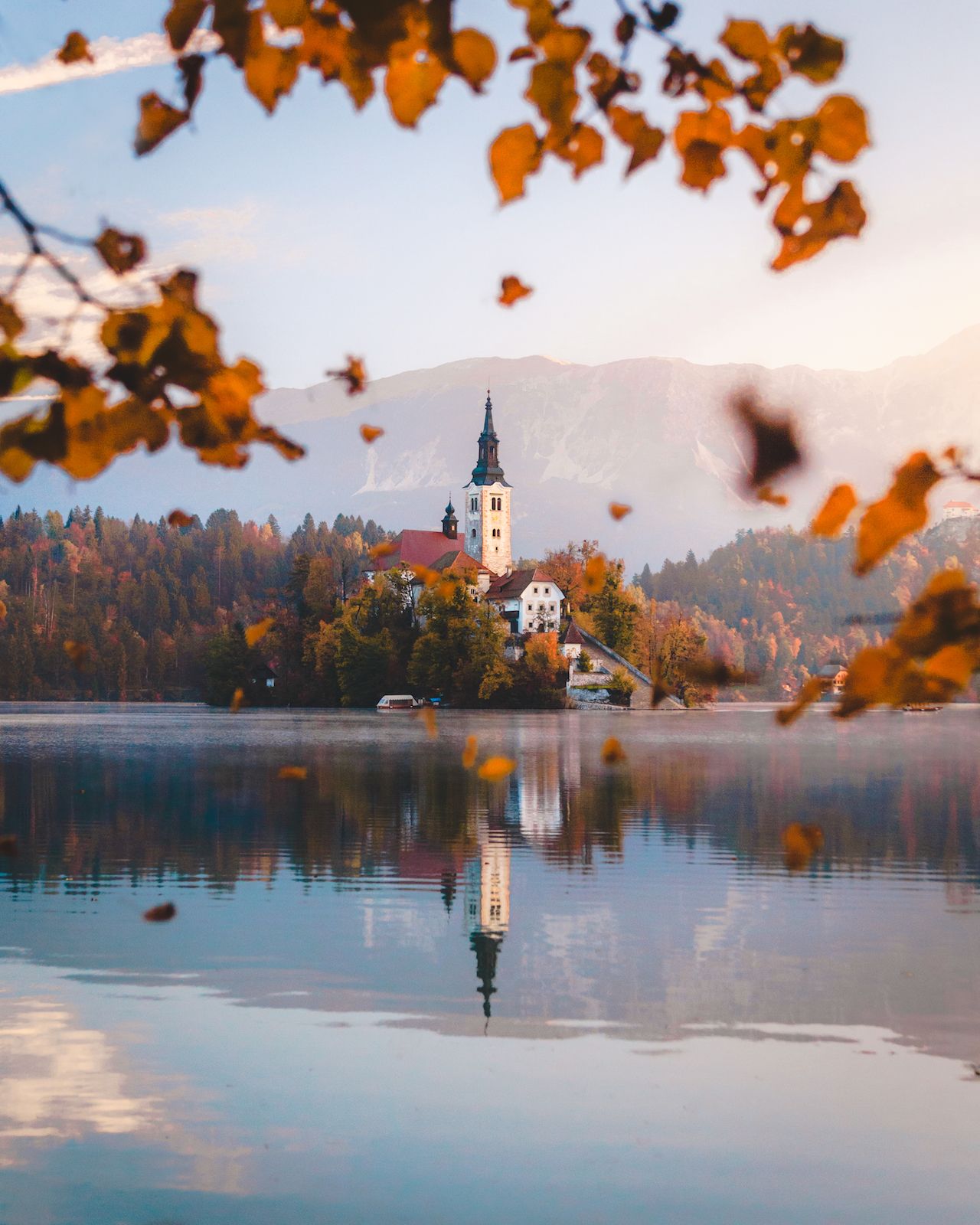 Lake Bled is probably Slovenia’s most recognizable spot, and for good reason. With the deep blue water and surrounding forests and mountains, Lake Bled is stunning. But you can do more there than just take cool photos. If it’s still warm enough, you can go kayaking, swimming, or use the lake as a starting point for hiking through the Slovenian Julian Alps. If you’re so inclined, you can also take a tour of the various nearby wine estates. Getting there is easy, too. Just take a bus or train from the capital of Ljubljana for a few euros, and you’ll be there in under an hour. 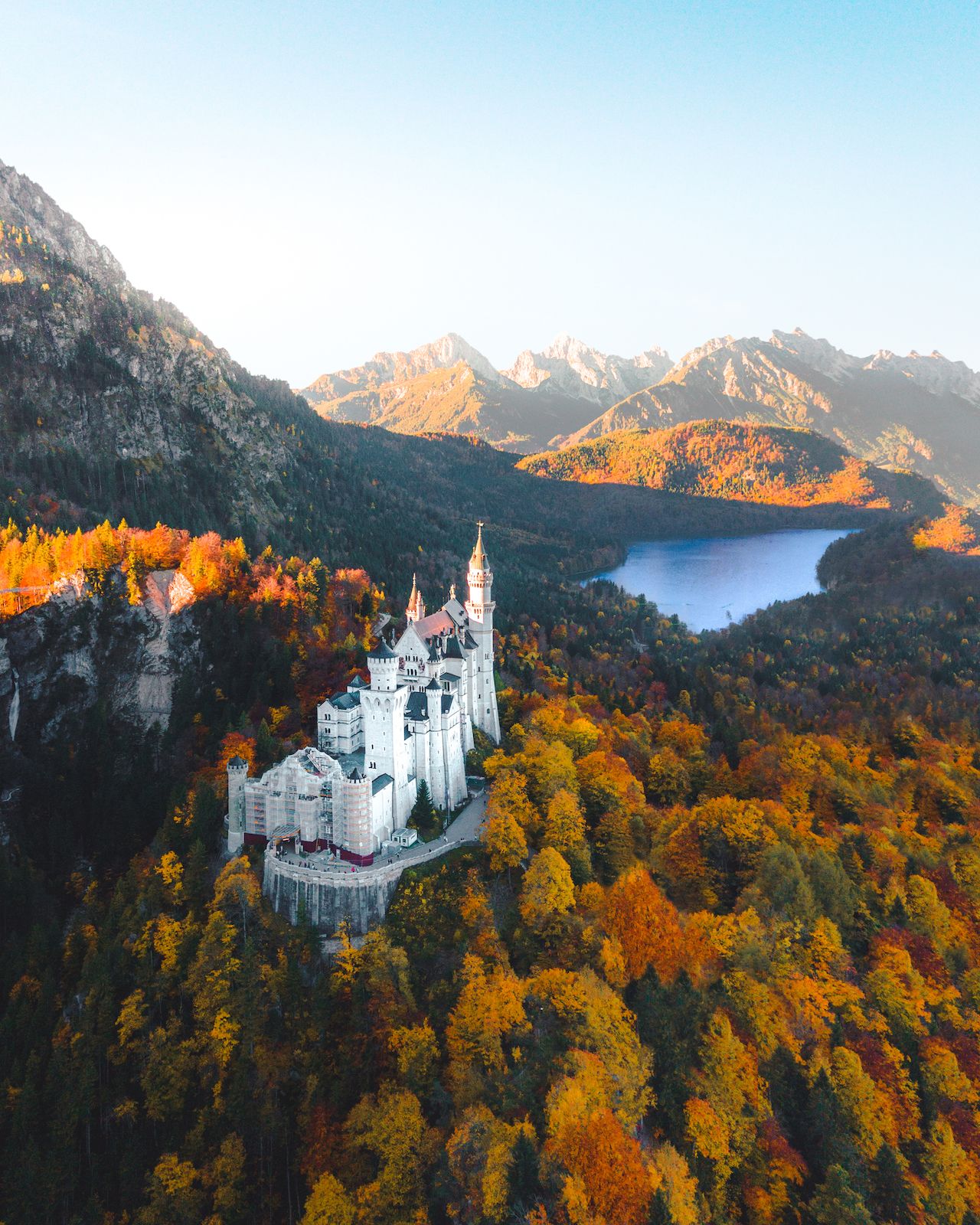 Built in the 19th century by King Ludwig, the Neuschwanstein Castle looks like it’s right out of a fairytale (it inspired Disney’s Magic Kingdom after all). Located in the Bavarian Alps, on top of a hill near the town of Füssen, the castle has a panoramic view of the countryside. Ludwig built the castle in honor of the composer Richard Wagner. Neuschwanstein itself translates to “New Swan Castle” — a reference to one of Wagner’s characters called the “Swan Knight.” 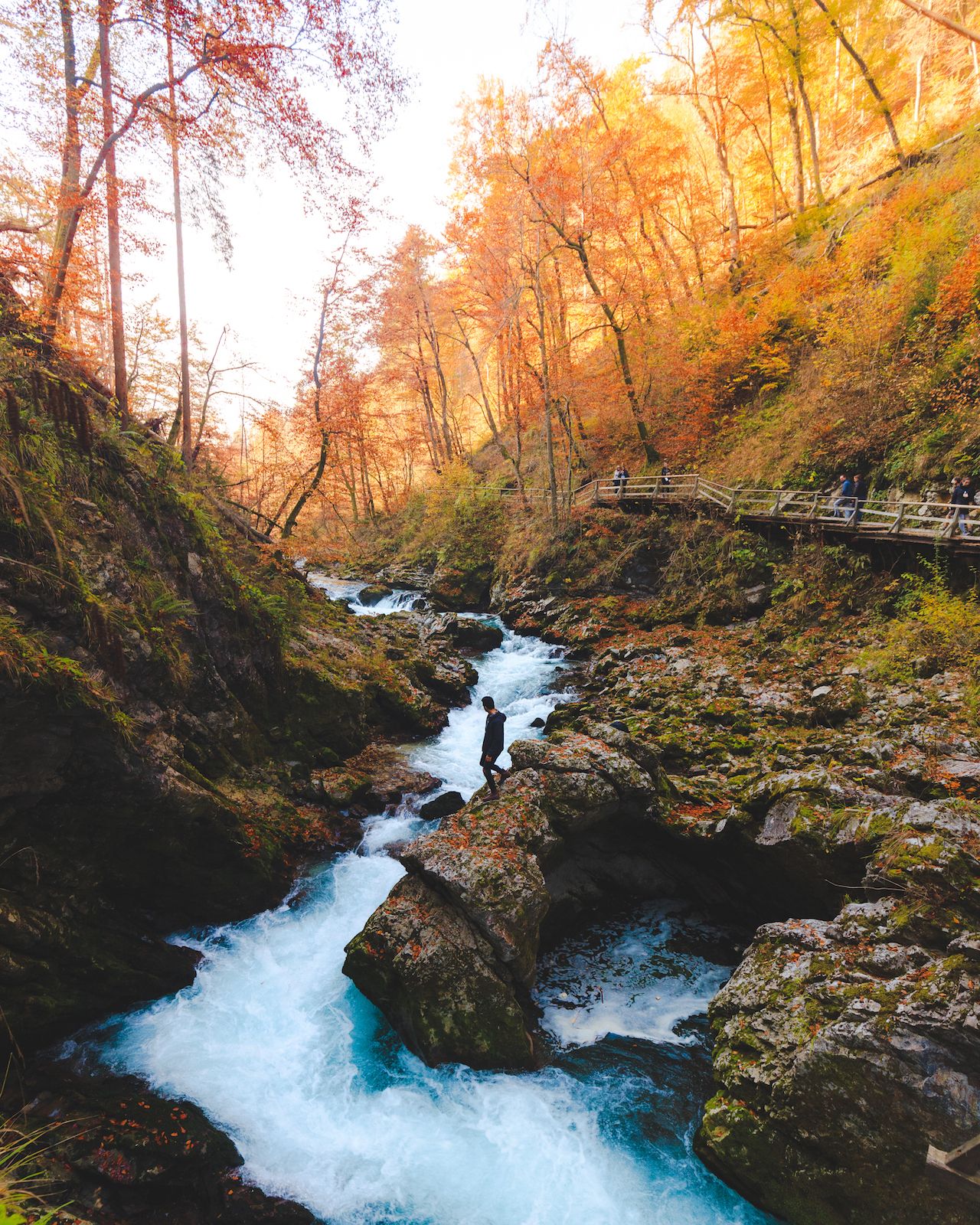 One of the most popular natural features of Slovenia, the bridges and walkways of Vintgar Gorge make hiking relatively easy. The canyon’s winding wooden walkways lead past the turbulent Radovna River, ending at the 42-foot-high Šum Waterfall — Slovenia’s highest river waterfall. There’s also a cafe just before the waterfall, where you can relax. 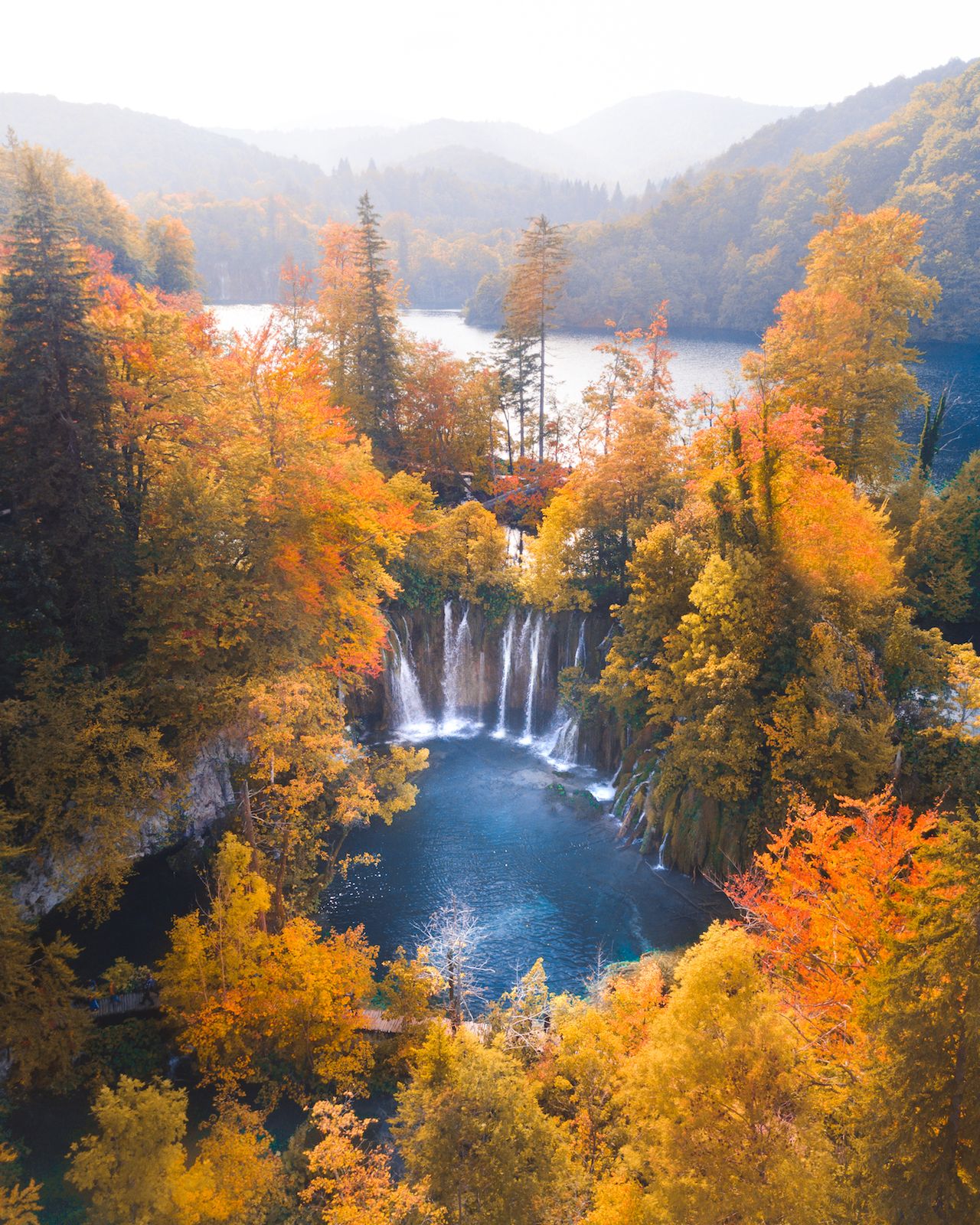 No visit to Croatia is complete without a trip to Plitvice Lakes National Park. While it might be a little farther east than you were planning on venturing, Plitvice Lakes is well worth the detour. The park, located in the heart of the country, about 80 miles from Zagreb, includes 16 natural lakes connected by a series of waterfalls. Covering 115 square miles, the park is full of deer, bears, wolves, boars, and rare birds, with the forest’s richest colors really coming out in autumn. The park is open year-round, for a fee of $8 per visitor.

Road TripsThe Most Scenic Drives Through Europe in the Fall
Tagged
Galleries Europe
What did you think of this story?
Meh
Good
Awesome