Most of our planet is made of water. It makes sense, then, that some of Earth’s most photogenic scenery lies beneath the sea. Since much of the ocean’s depths still remain a mystery, we rely heavily on underwater photography to give us a glimpse into this largely unexplored part of our planet. The Underwater Photographer of the Year Competition is designed to do just that. From a close-up of shipwrecks to strange, glowing marine organisms, these photos give us a window into another world. These are the winners in each category from 2021’s Underwater Photographer of the Year Contest and the photographers’ accounts of their backstories accompanying them. 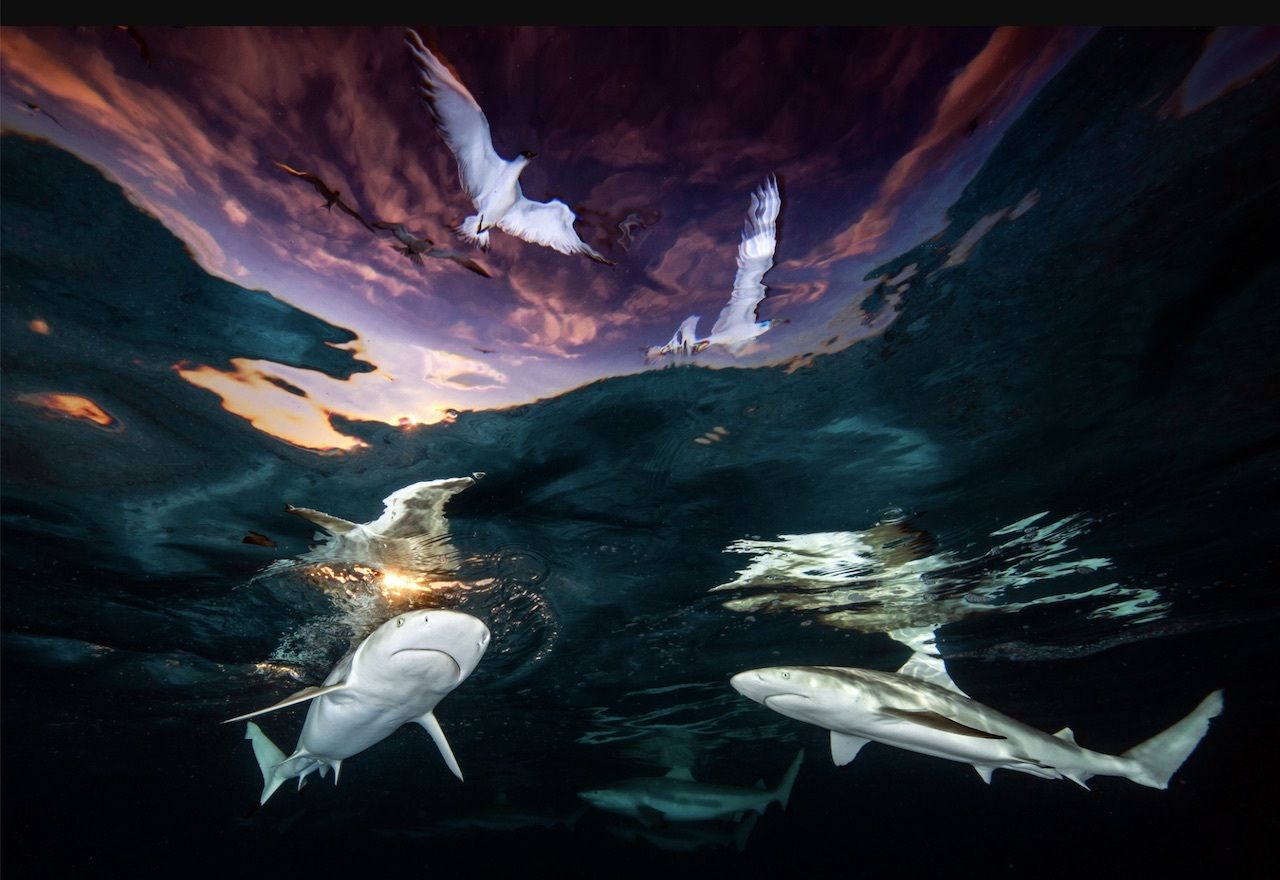 “In French Polynesia there is strong legal protection for sharks, allowing them to thrive and balance the marine ecosystem. In August 2020, I visited the island of Moorea, which was not only open to visitors but also happens to be my favorite place to photograph sharks. During this trip, I spent several evenings in the shallows at sunset, hoping to capture something unique. Instead of focusing on split-level images that I am known for, I decided to try something different. I envisioned and aimed to capture the sharks underwater with the sunset seen through Snell’s window. It took many attempts, but on this particular evening the water was calm, the sharks came into a nice composition, and I got lucky with the birds as well. Since many shark species are threatened with extinction, it is my hope that images of these beautiful animals will help promote their conservation.” 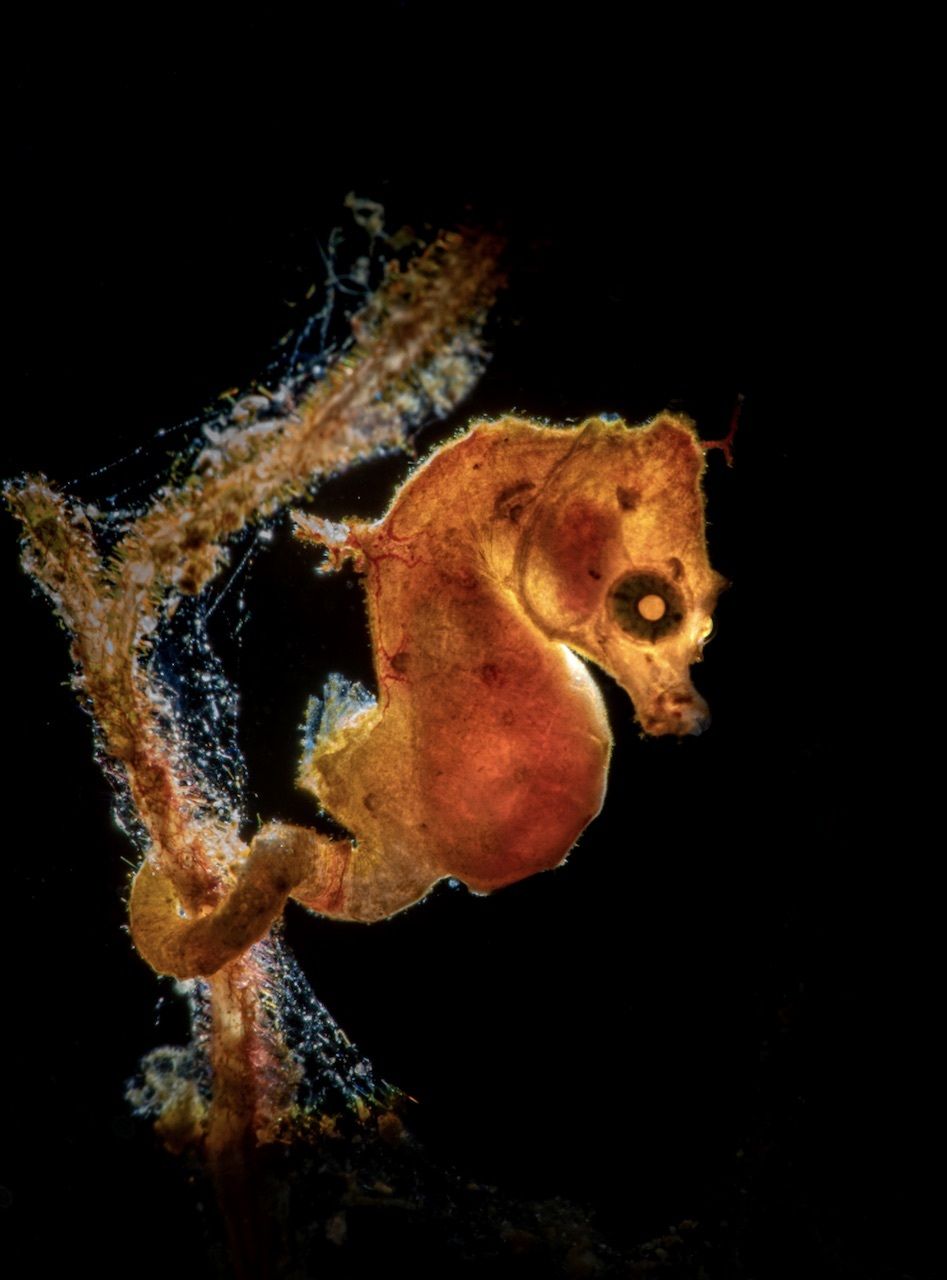 “Pontohi pygmy seahorse (Hippocampus pontohi) is one of the smallest and most recently discovered seahorses. They usually live on reef walls and can be hard to find. We had found two during the morning dive, so I decided to dedicate the afternoon to getting a backlit photo. We were lucky to find this particular individual hanging out from the wall, allowing the use of a snoot to backlight it with the help of Rando, my dive guide. After setting up the camera and strobe we had to wait for it to get used to us and finally turn toward the camera for a brief moment.” 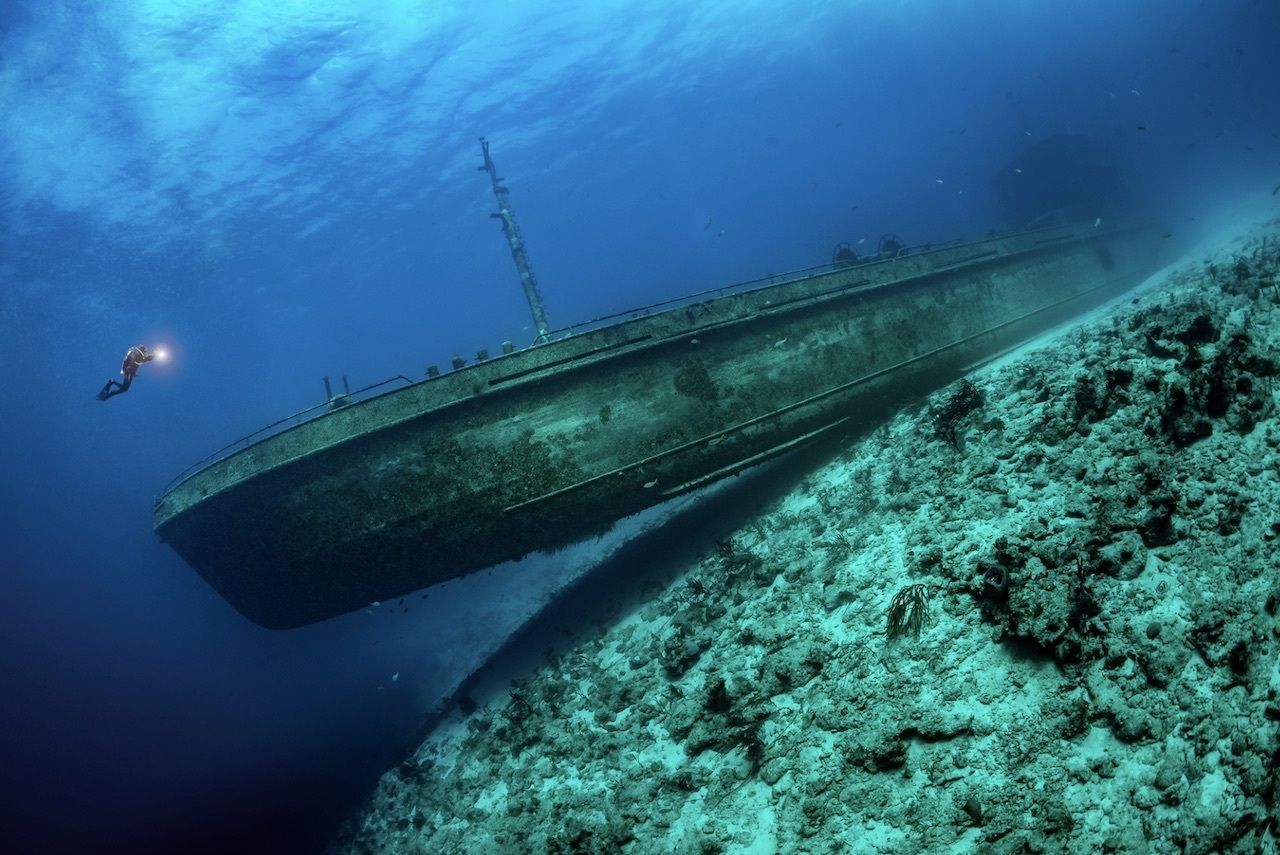 “Due to bad weather at Tiger Beach and in Bimini we had to look for shelter near Nassau in the Bahamas and do some regular dives. This wreck was totally new to me and a big surprise when we descended as the bow is hanging almost completely over a sandy overhang.”

Category: Behavior — “A Striped Marlin in a High-Speed Hunt in Mexico” 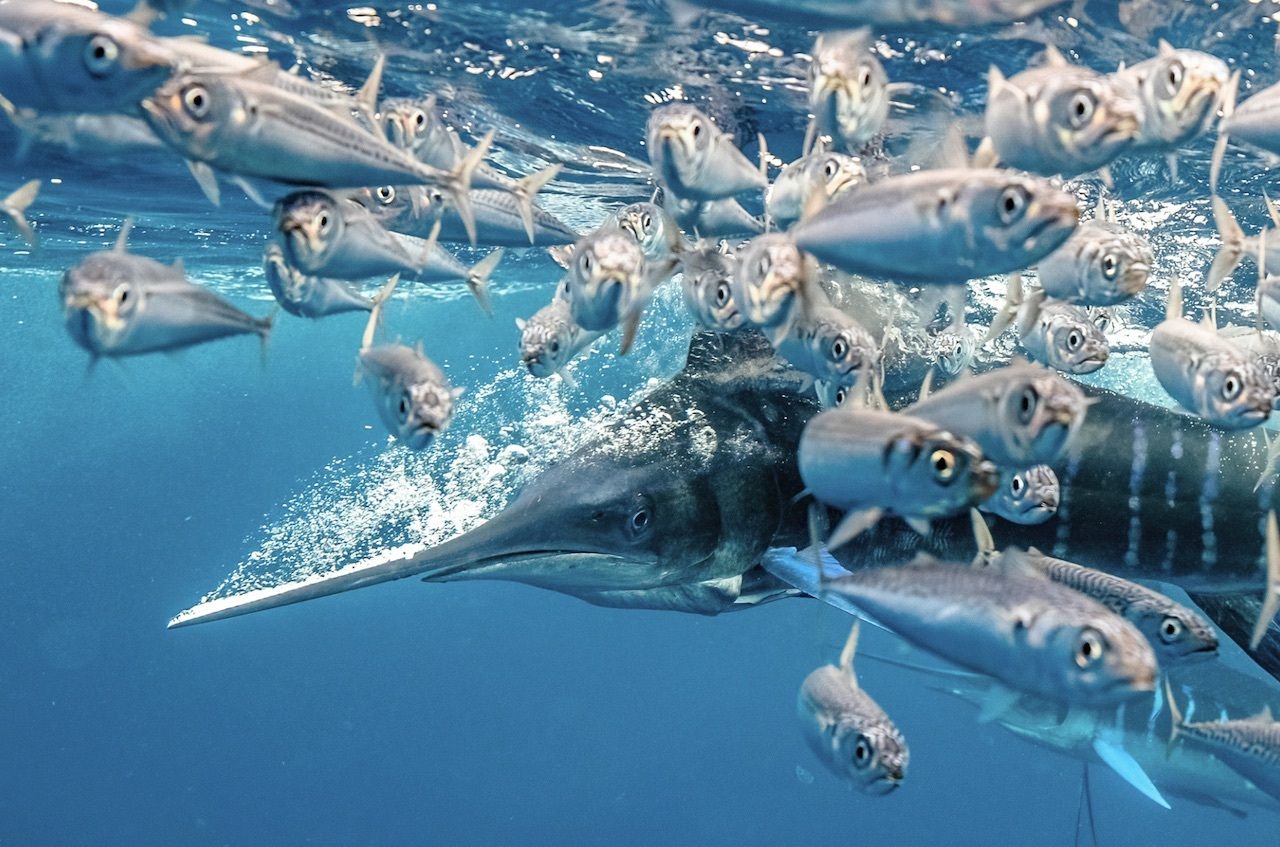 “This is a terrifying scene for the small fish, fleeing for their lives as a striped marlin hunts them. The slightest mistake means life or death. There are often birds hunting from above and sometimes a dozen other marlin and sea lions attacking from all sides. Marlin are one of the fastest fish in the sea, a terrifying predator for a small fish in the great blue desert. I went to Mexico to document these feeding frenzies but was not expecting such a fast-paced hunt, almost too fast for my brain to process. For a brief moment, this scene unfolded before me, and I had to rely on all my instincts and practice underwater to take this photo. I used natural light and stayed on the periphery of the bait-ball so as to try and minimize disturbance. Watching wild animals hunt is one of the greatest spectacles in nature.” 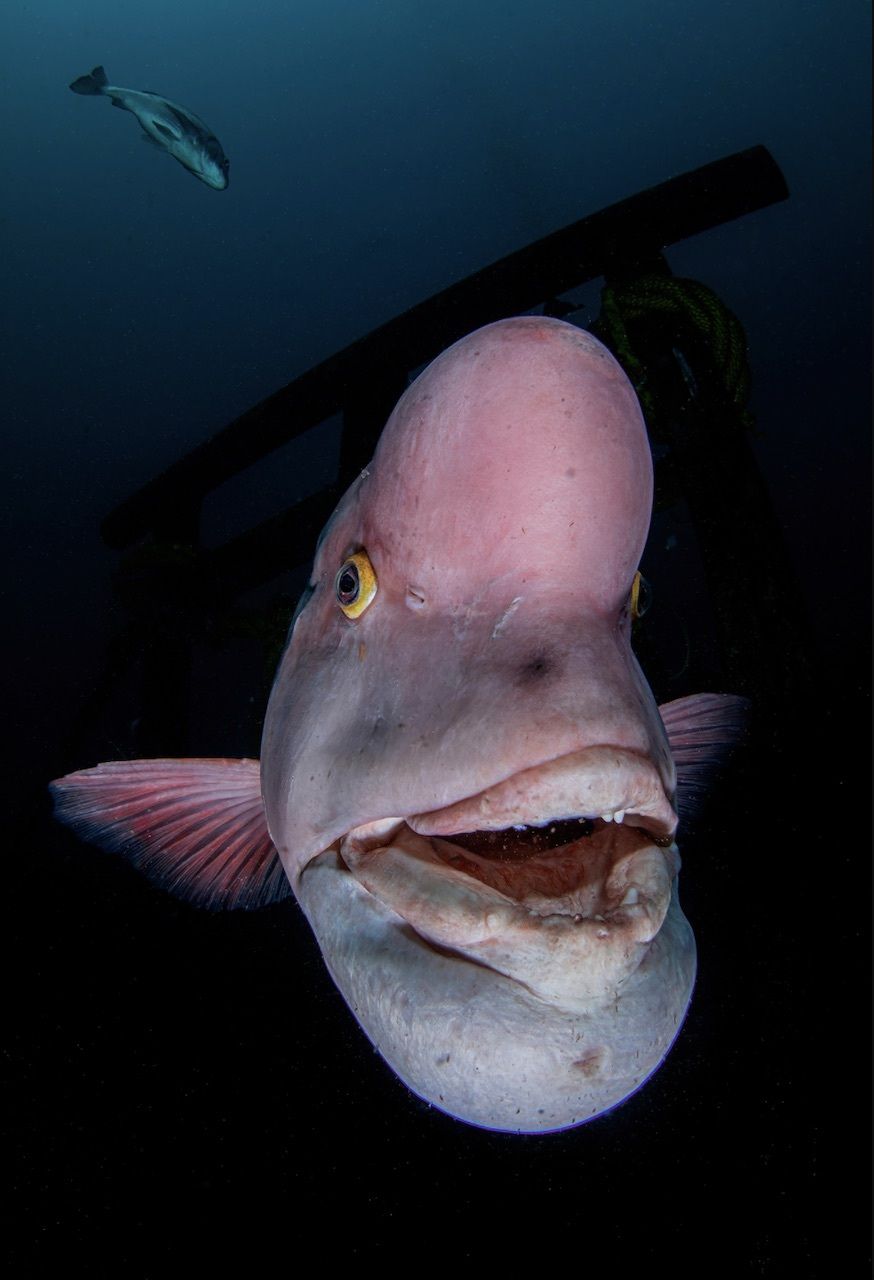 “As the Asian sheepshead wrasse grows older, it changes sex from female to male, and at the same time it develops a large lump on its head. I thought about the lighting and composition so that the image of the bump and the powerful face could be conveyed and challenged many times. He lives in a shrine under the water and looks just like a guardian deity.”

Category: Black and White — “The Cut” 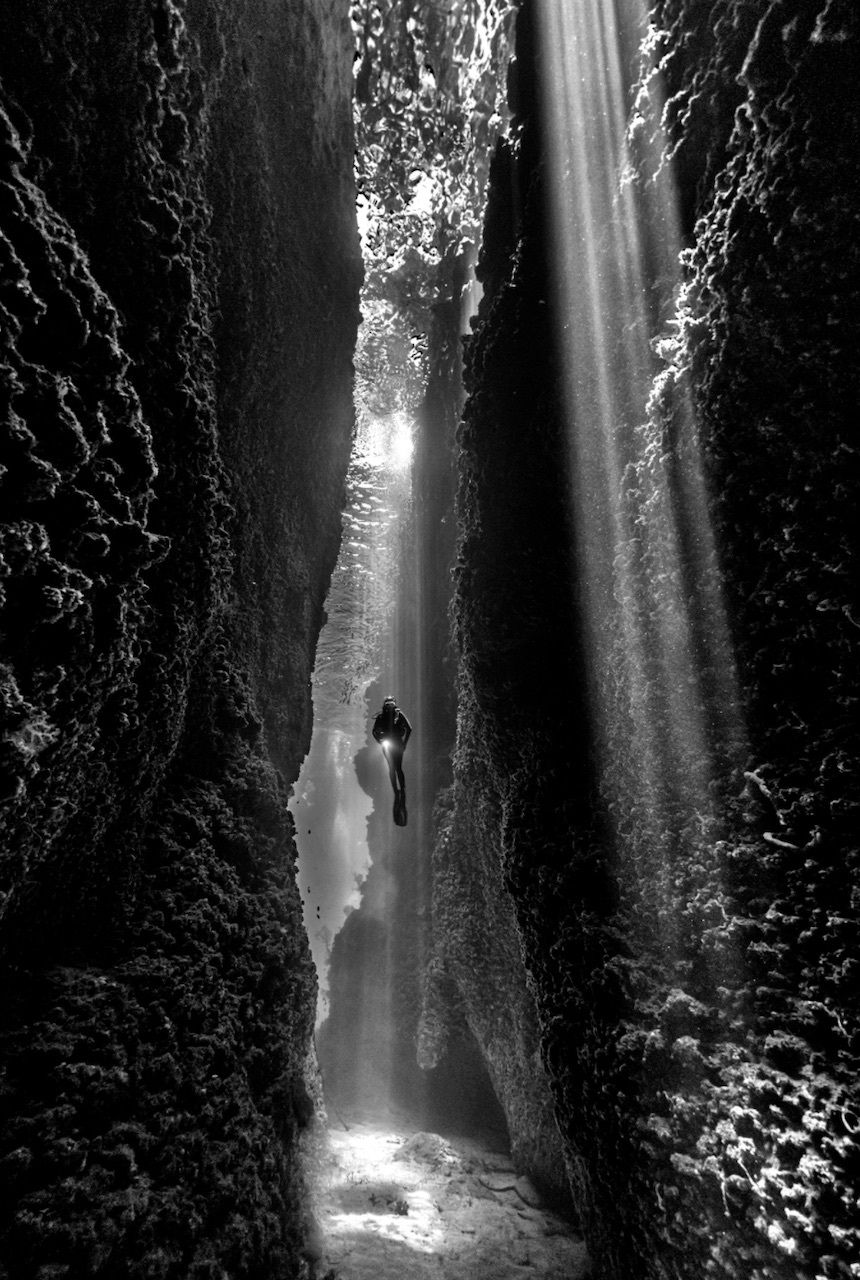 “This photograph was taken at Leru Cut in the Solomon Islands. I was lucky enough to have won a 10-day trip on the Solomons PNG Master liveaboard and was very excited to have the opportunity to visit this site again. Having dived these waters on two previous occasions, I knew what to expect. However, I needed an elegant model as an essential element for this composition, and my immediate companions could not be classified in any way as elegant! Fortunately, there was another photographer in my dingy group whose beautiful model wife was the perfect subject. Somewhat cheekily I managed to capture a few shots of her as she posed for her husband!” 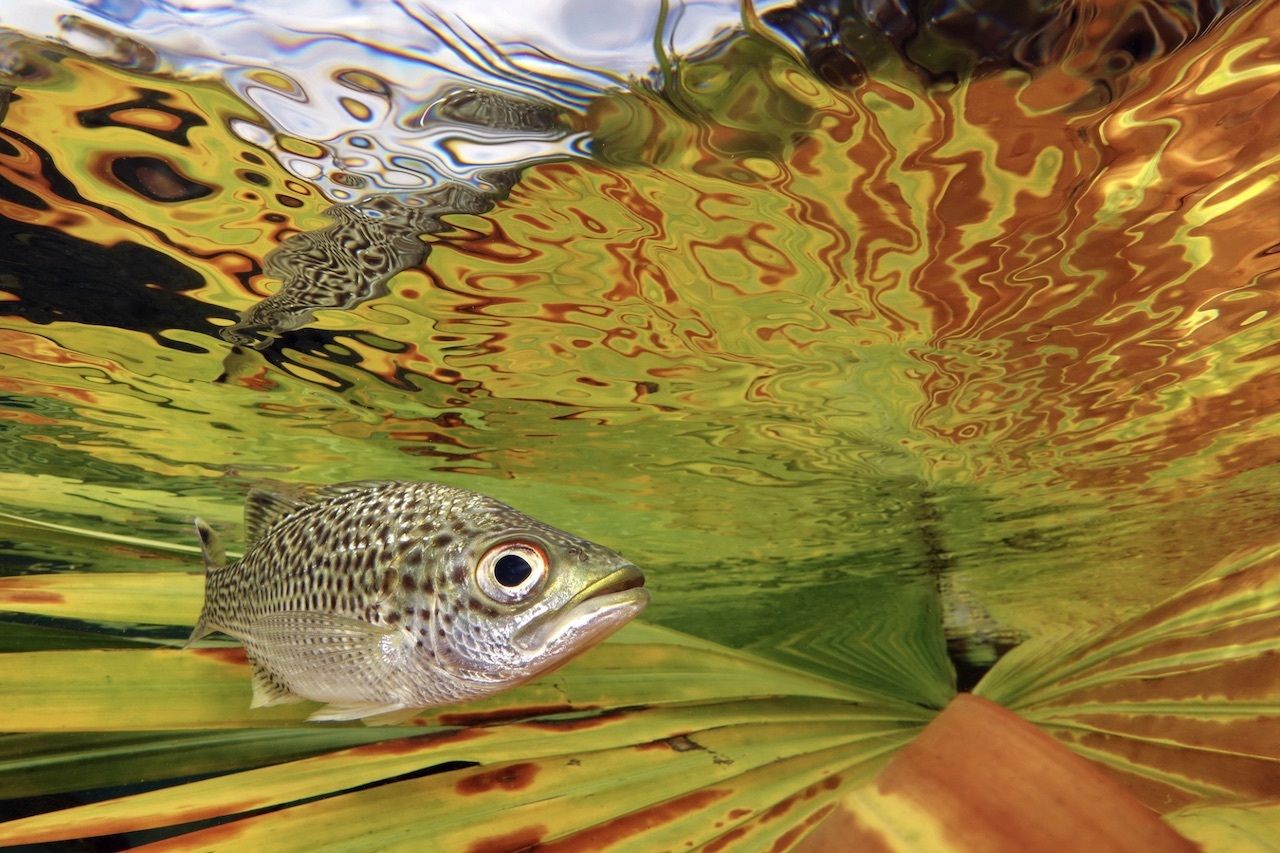 “I used to go fishing in the river to take some shots a few days after big rains, which make the riverbed go higher and make some big floods. The current is strong but still practicable for freediving with dislodged plants, leaves, and branches. They bring a lot of colors that showcase this plain New Caledonian carp, which are common in our rivers.”

Category: Up and Coming — “Tying In” 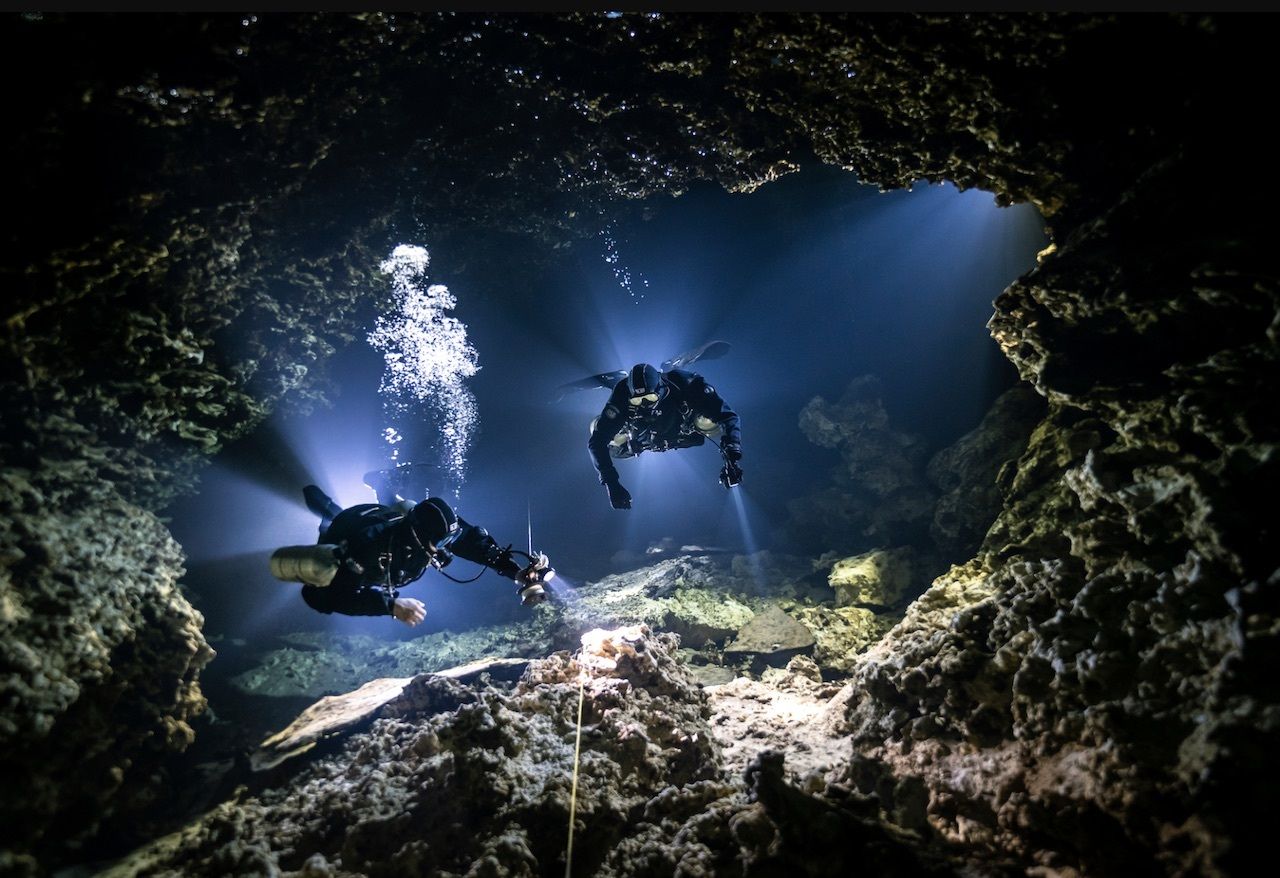 “As this shot was taken during cave training, we had a pretty intricate plan in place, which is not usually how I run cave shoots. However, the plan failed miserably as the cave student, Max, had multiple equipment failures before even making it past the cavern zone. Plans are important, but when they fail you need to adapt quickly and deal with a new situation. After fixing all the issues on the surface and changing our plan to accommodate our now fairly depleted gas supplies, we descended again. I swam ahead and waited just beyond the beginning of the permanent mainline watching the team swim towards me, followed closely by the lighting assistants creating those beautiful halo effects. Suddenly everything just lined up perfectly, so I pressed the shutter just as Max turned to tie into the mainline.”

Category: British Waters Wide Angle and My Backyard — “While You Sleep” 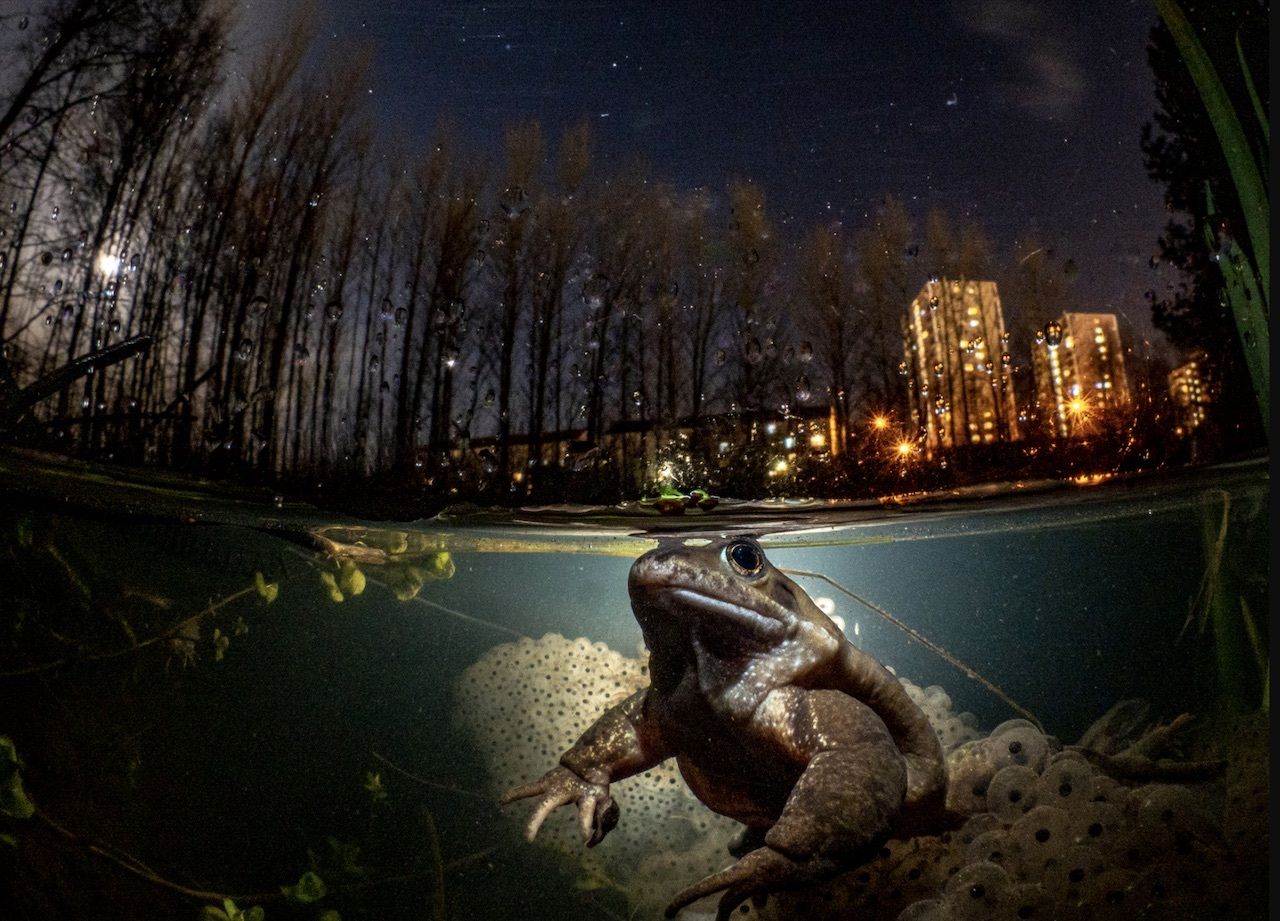 “Malls Mire — small woodland in Glasgow between a housing estate, supermarket, and factory — is an unlikely haven for wildlife. As winter thaws, for a few nights each year, one of its small muddy ponds comes alive with common frogs. I first photographed them here in 2018, and since that day I’ve had this image in my head. It took another two years before I captured the little wonders that stir in the cold nights while the city sleeps. Using a temperamental remote shutter while combining long-exposure, backlighting, close-focus wide-angle, and split photography meant I had to abandon any frustrations and try (and inevitably fail) for the hundredth time to get it right. This final shot is a culmination of 25 hours over four nights of lying in darkness, covered in mud, waiting on nature’s unpredictable elements to align. Time well spent? Absolutely.” 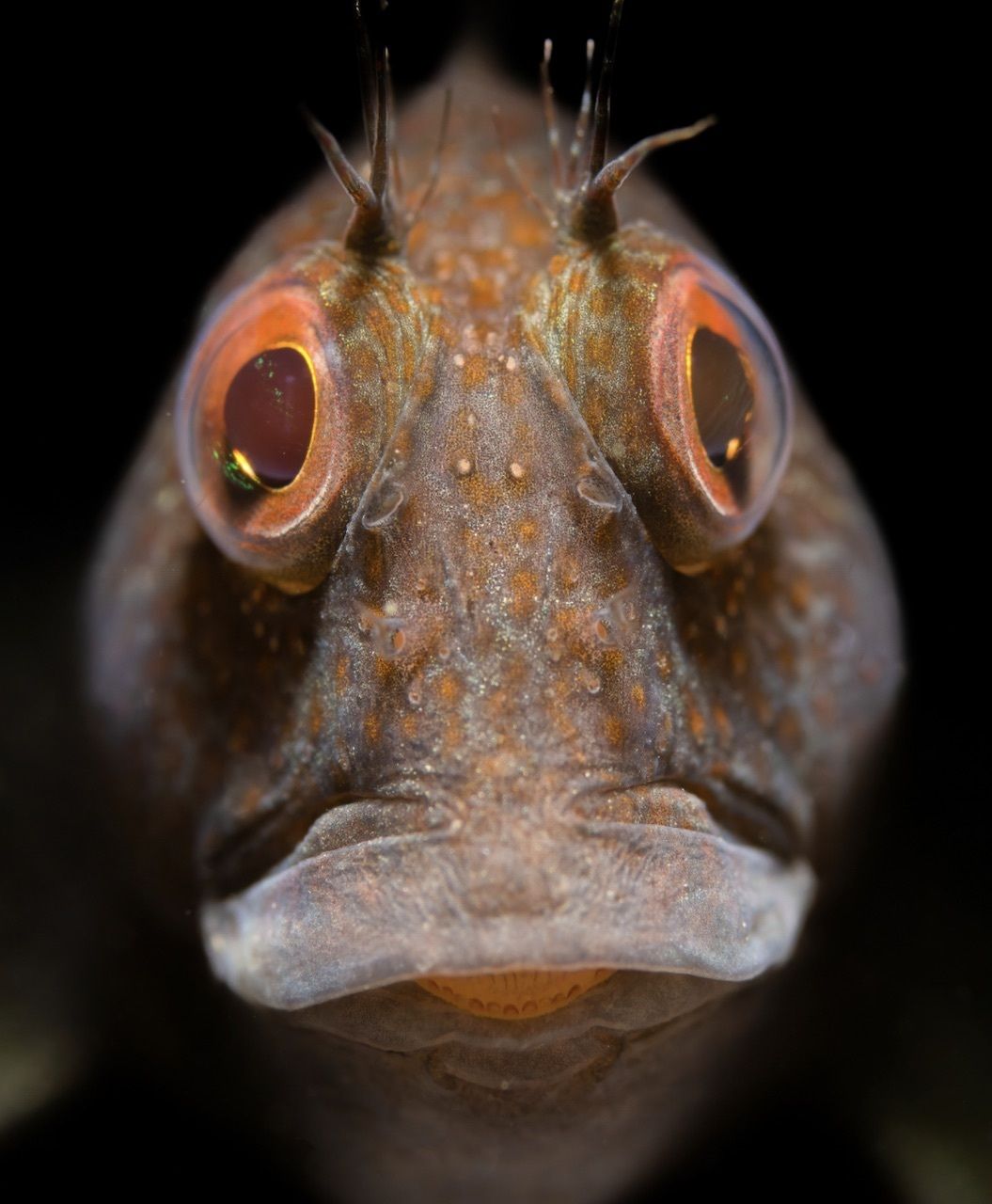 “The variable blenny (Parablennius pilicornis) is a relatively new arrival to UK coastal waters, with its origins from more southerly waters (it has been recorded throughout the Mediterranean Sea). This species may appear in a number of different color forms. The current image is of a male and was taken in Plymouth Sound, July 2020. This particular blenny was standing out proud on a reef ledge, making it an ideal subject. The image was captured using snooted lighting to emphasize only the face of the blenny, with the snooted light being positioned from above the head enhancing the facial features.” 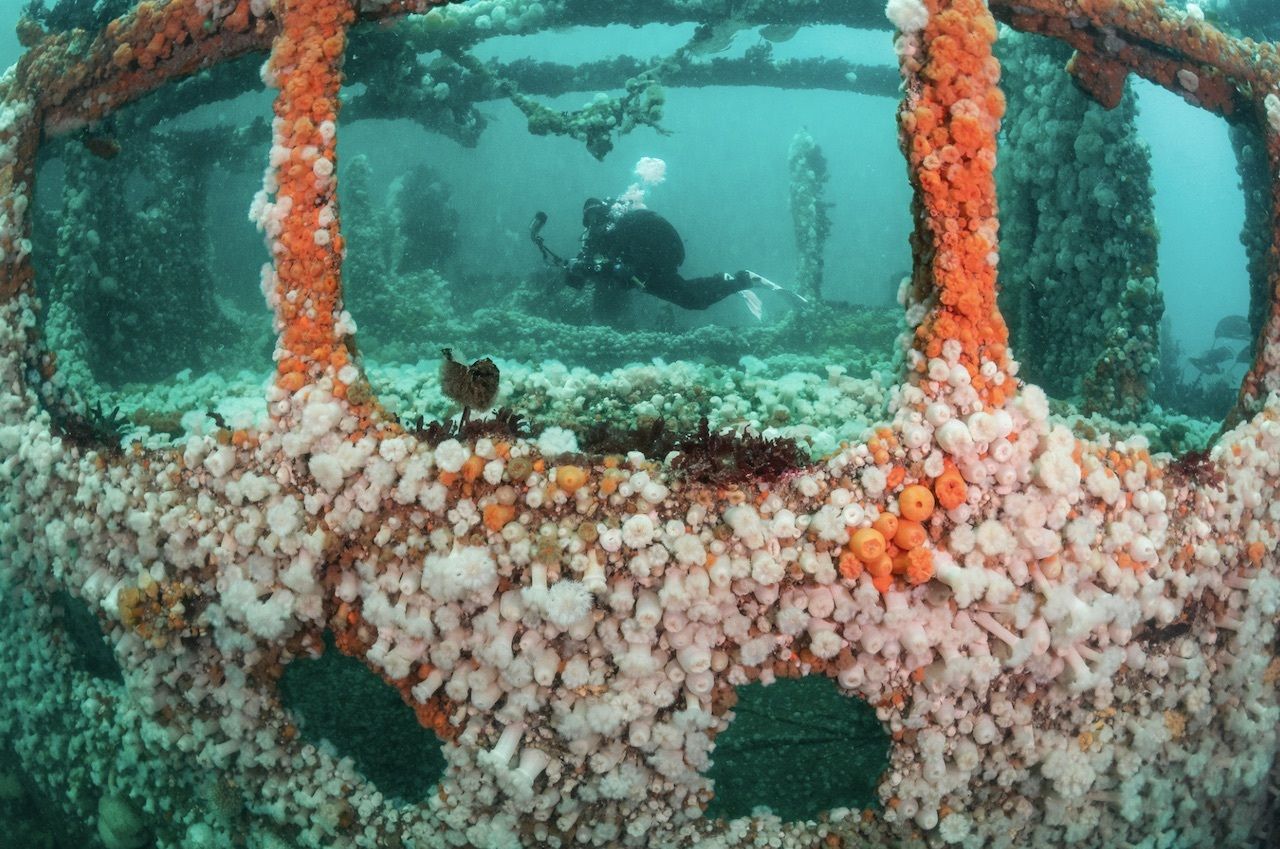 “The UK, in my view, has some of the finest wreck diving in the world, and the SS Hispania in the Sound of Mull is one of my favorites. This wreck truly has become an artificial reef: The wreck attracts the wildlife, and both wreck and wildlife attract the divers. Every inch of metal is covered in anemones, seaweeds or sponges, orange and white. My buddy was investigating the superstructure above a row of portholes, and I moved back, shooting as wide as I could to try to give a sense of scale within this colorful scene.” 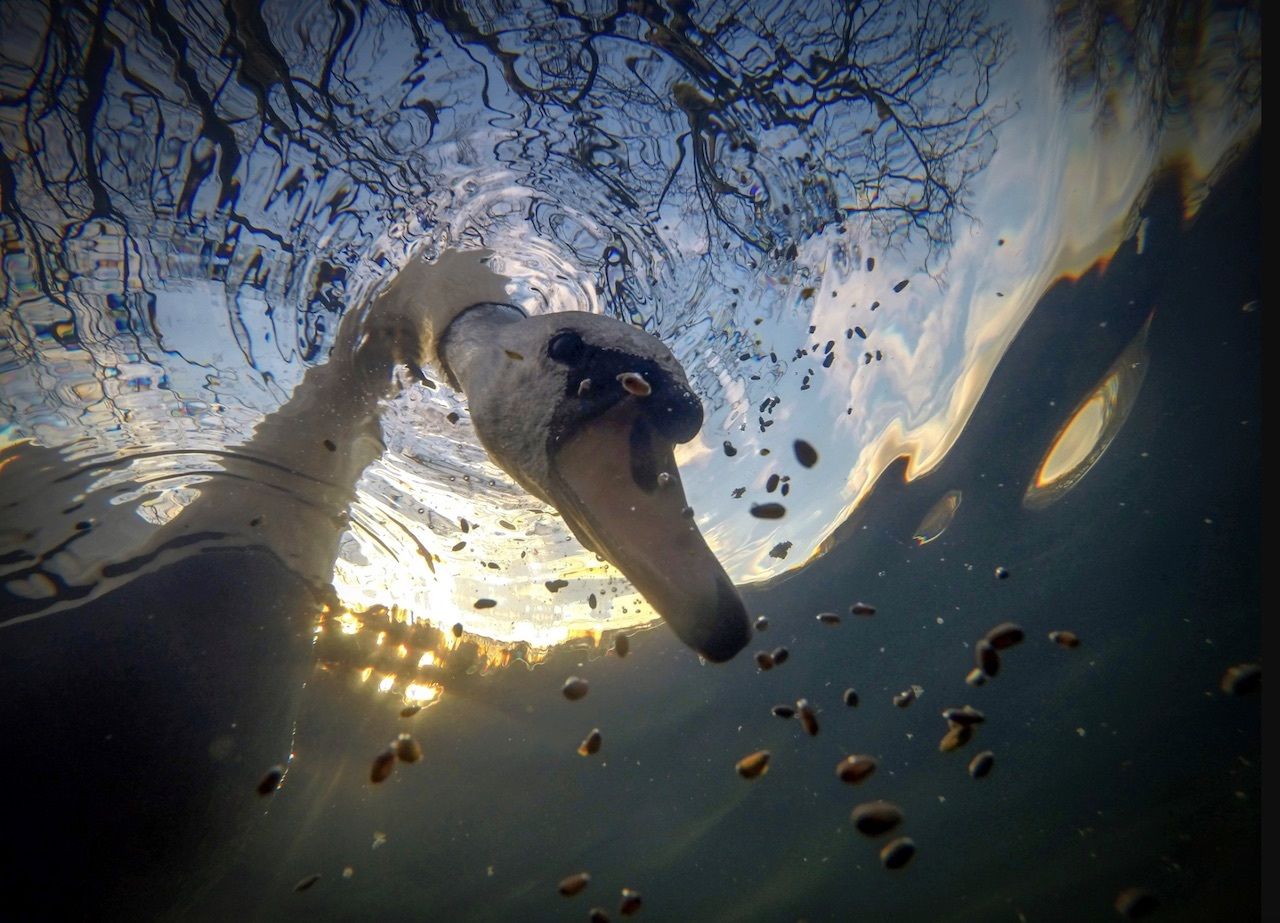 “I had been watching a couple of mute swans at my local lake. They seemed to be following people around looking for food. I decided to attach a small weight to the back of my GoPro and threw it into the lake a short distance from me. The small weight would mean the GoPro always fell on its back, so I could shoot at an almost vertical angle. I have connected the GoPro to my phone so I could remotely fire off images. The GoPro hitting the water had attached the swan’s interest, and they swam over. I waited until one of the swans was in the correct position, with its head underwater, and shot a high-speed burst of images enabling me to capture this picture.” 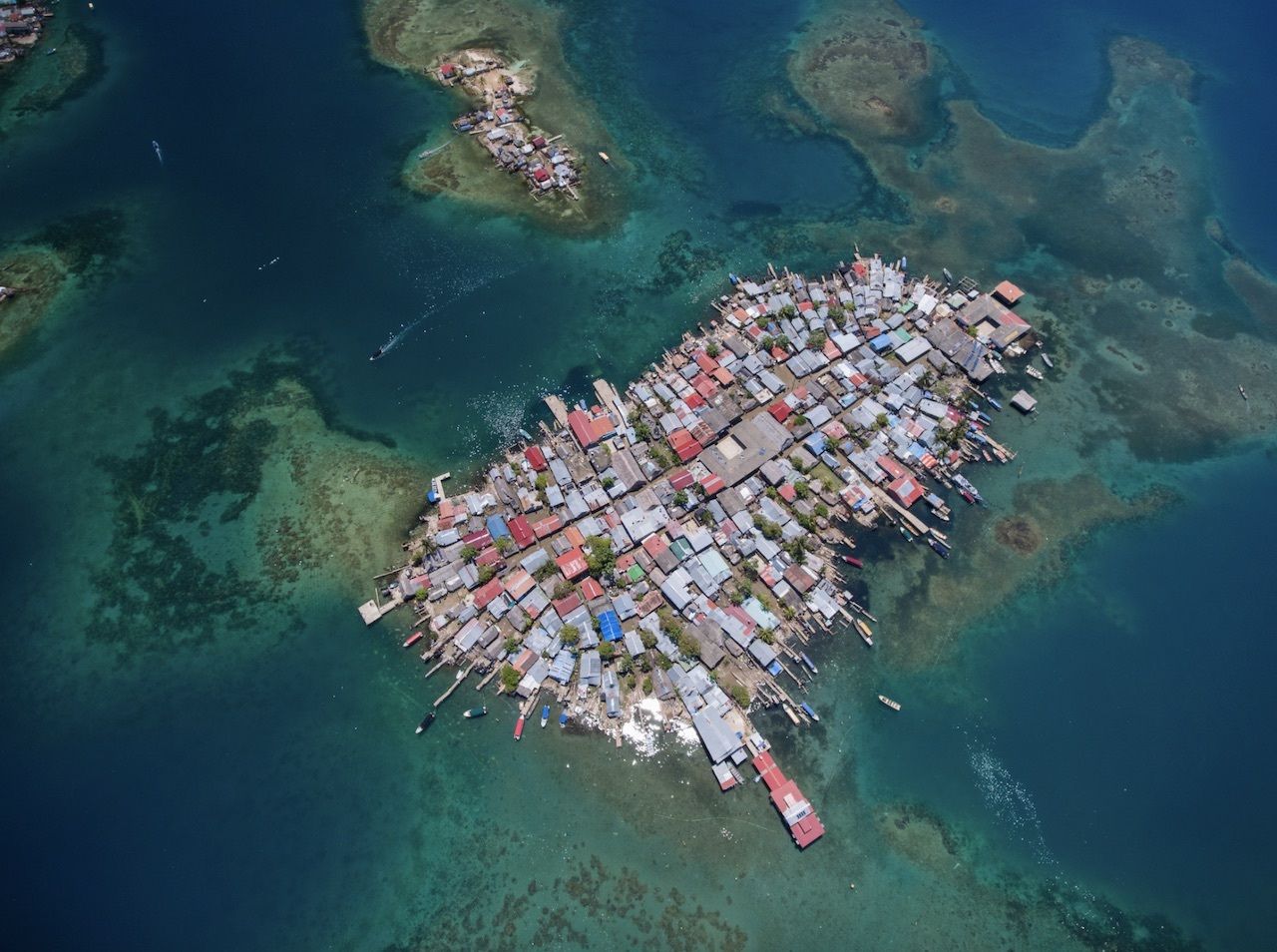 “A tightly inhabited village off the coast of Panama in the Guna Yala region serves as a microcosmic reminder of how humans across the planet are consuming land and space at a rapid rate. Most of the Guna people live on these densely populated islands, catching fish and farming coconuts on nearby islands. The importance of man’s relationship with nature and the need to protect it becomes very apparent when you look at our species from a bird’s-eye perspective and see how much space we take up. I had come to this region of Panama to photograph the art of making mola, the traditional clothing that the Guna people wear. While waiting on a boat I flew my drone over this island to get this aerial perspective and give more impact to the image than I could have shooting at sea level or from underwater.”

WildlifeWhere To Swim With the World’s Most Amazing Marine Wildlife
Tagged
News
What did you think of this story?
Meh
Good
Awesome